The Rorschach inkblot test was created in 1921 to analyze how individuals who view the exact same picture perceive and interpret external reality. While the ink pattern is factually the same, different people can and do project different interpretations of the data. Markets are experiencing a similar test right now in trying to interpret the “inkblots” from recent economic data, and particularly so around inflation and how much of the recent spike was transitory due to so called base effects. While fixed income and equity markets have remained relatively patient thus far, the next two to three months should see the peak of those inflationary base effects coming through. This period could be cause for a bit of increased market angst driven by interest rate fears in some of the more rate-sensitive sectors of markets. Indeed, May’s CPI (Consumer Price Index) print of 5% was the highest in 13 years adding fuel to the debate. However, any meaningful volatility likely would be capped by a continuation of support from the Fed and fiscal spending, which continue to underpin a strong consumer and corporate picture. This would continue to favor credit and support a yield focus for investors to counter the impacts from higher rates on Treasuries.

Without question, the first half of 2021 for markets and the economy has been supported by three unusual events, coming together in a forceful combination. Of course, the reopening of the economy plays a central role. But we are also amid a sea change in fiscal policy which has pumped approximately 3x more money into the economy than during the Global Financial Crisis and likely still counting when we include the multi-trillion-dollar infrastructure proposals being debated. The Fed has also created an historic shift in its model by flipping the script of the last 30 years from one of proactively tightening in anticipation of inflation to proactively waiting for inflation to overshoot its long-term targets, a change that makes one wonder what Mr. Volcker might have to say. The key question to wrestle with is, “Has all this gone too far and does the Fed risk falling behind the inflation curve?”

Clearly, it is a risk to pay attention to and remains a key consideration particularly as asset prices across markets are at or approaching record levels. And as we approach peak inflation, we think the debate will intensify and be driven by two factors:

As for the first factor, on the stickiness side – thus far at least – there appears to be some encouraging data.

Above, we see that according to the Atlanta Fed’s calculations to date, the jump in inflation recently is not of the sticky variety but is certainly something to keep an eye on.

As for the second factor, implied CPI as measured by Treasury Inflation-Protected Securities (TIPS) bonds is projected to stay at or above 3% for the balance of the year and into 2022, a lengthy period. Will the Fed, which has hinted at a “moderate” inflation overshoot of 2.25% to 2.5% sit by while inflation begins to descend but stays near or above 3% for several quarters? The Fed may, but we think it will become increasingly difficult for the market to remain as patient. Even as inflation begins to move from its peak down the other side of the slope through the third quarter as expected, we still see the debate about the Fed falling behind the curve continuing. Indeed, we are seeing a little bit of a wedge develop between the Fed’s position to not move rates until after 2023 (as evidenced by its “Dot plot” forecasts) versus the move in Fed Funds implied by the fixed income markets which implies a first move late in 2022. 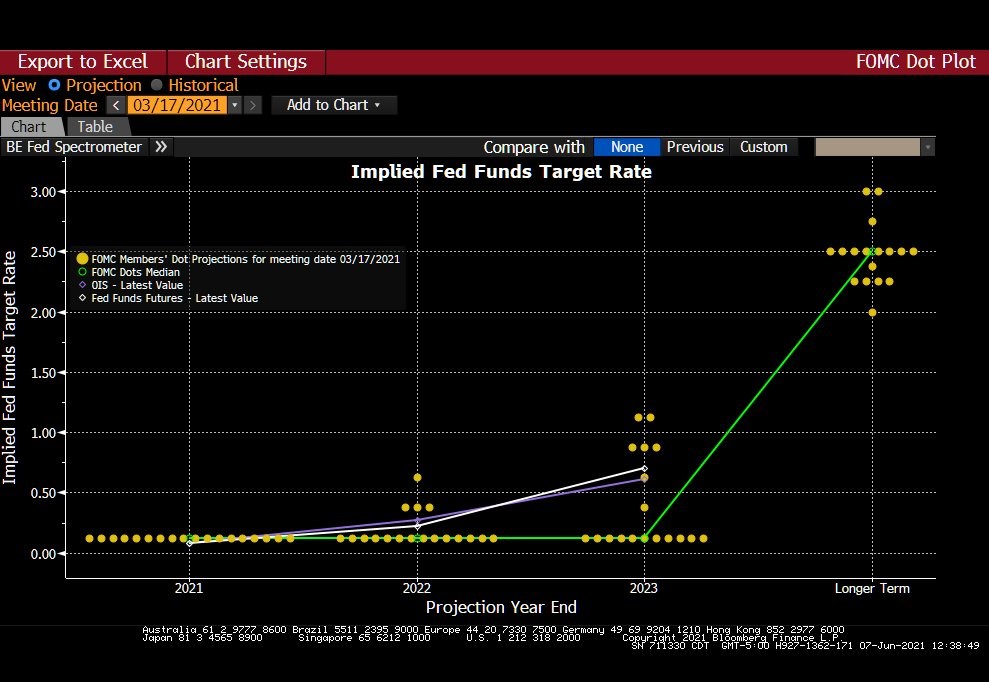 It would not be surprising to see the Dot plot evolve toward the market view if the economy continues to remain solid, and inflation stays continuously and “moderately” above 2% for more than 24 months from today. In that case it would also not be surprising to see the 10-year Treasury test the 2% level this year; however, if we take a step back, that type of move is not that dramatic, leaves real yields in negative territory and should not change the constructive narrative for the economy.

While there may be some short-term indigestion from a quicker shift up in the Fed’s Dot plot expectations, that would not necessarily be a bad outcome for markets or credit, in our opinion. It would show a Fed not falling behind the curve and acting more nimbly to assure the market that is the case. Because of this, we would view any meaningful volatility as a potential opportunity.

So, as we go forward, the key question will be, “What does the Fed see in the inkblots?”

Are Your Portfolios Ready if US Stocks Underperform?

Understanding Our Dismal Ability to Forecast

The Financial Freedom of Owning Less

Inflation Is Starting to Weigh on Consumer Confidence and Spending

Knowledge Vs. Experience: Why Most Investors Wind Up Losing

H2 2021 Investment Outlook: Return to (Much Closer to) Normal

by Anastasia Amoroso of iCapital Network, 7/19/21

Still No Reason to Panic About Inflation

Three-Question Survey You Must Send to All Prospects

A Curmudgeon on Cryptocurrency

Here’s Why the Yield Curve is Likely to Re-steepen, and What that Means for Stocks