In a November 1789 letter addressed to his good friend, Jean-Baptiste Le Roy, Founding Father Benjamin Franklin shared that America was off to a great start and the recently established U.S. Constitution showed much promise but immediately added, “In this world, nothing is certain except death and taxes.” Today, this famous phrase has never hit closer to home for inhabitants of this post-COVID-19 world as the certainties of death and taxes are juxtaposed against the uncertainties of everything else. Shortly after the Biden administration announced the $2.7 trillion American Jobs Plan and the $1.8 trillion American Families Plan, investors have been acutely preparing for higher tax burdens. Enter municipal bonds: not only do they provide much-needed tax sheltering; investors are also drawn to the historically-low volatility and low default rates of the asset class. As an added sweetener, tax-exempt municipals have, so far, insulated investors from the broad inflationary pressures that have pummeled virtually every other fixed income asset class this year. That said, perhaps those adding money into tax-exempt debt this year view municipals as one of the most appropriate asset classes to simultaneously address life’s two certainties in one fell swoop.

While the American Rescue Plan and its $350 billion emergency allocation to states and local governments has been an absolute credit positive for the market year-to-date, all eyes are now on these two subsequent proposals. The American Jobs Plan and the American Families Plan are both, in President Biden’s words, "A once-in-a-generation investments with the purpose of respectively rebuilding our country’s aging infrastructure and retooling our education system." Both plans call for a partial unwinding of key tax amendments made in the Tax Cuts and Jobs Act (TCJA) of 2017. The Jobs Plan proposes raising the corporate tax rate from 21% to 28% while the Families Plan is looking to reinstate the top federal tax rate from 37% back to its pre-2017 level of 39.6%. Additionally, households earning over $1 million would be charged the same 39.6% rate on the investment income under the Families proposal, almost double their current capital gains tax of 20%. While both plans are carefully making their rounds through Congress as of the publishing of this article, high net worth investors haven’t left much to chance. Through May 12, an unprecedented $44.6 billion has been added to municipal mutual funds and ETFs (exchange-traded funds) year-to-date, according to Investment Company Institute. On top of this insatiable retail demand, many expect institutional investors like U.S. banks and corporations – who were net sellers of municipal debt in recent years – to begin ramping up their tax-exempt holdings in the coming quarters.

Aside from the relentless inflows that tax-sensitive investors have been adding to the market on a weekly basis, the municipal market has been keeping a close eye on a handful of initiatives that could get passed alongside the Jobs and Families proposals. These include:

Although efforts have been made to encourage more private sector issuance over the last decade, infrastructure investment continues to be dominated by the public sector. It should come as no surprise that municipal bond financing at the state level is expected to play a pivotal role in the Jobs Plan by jumpstarting the infrastructure projects across the country. The last time a large-scale infrastructure initiative was passed, a program called Build America Bonds (BABs) was introduced. The 2009 BABs program entitled its issuers to a 35% payment on interest costs, courtesy of the federal government, which incentivized municipalities to participate in this taxable direct subsidy initiative. This incentive was so popular that state and local governments issued more than $180 billion of deals during the life of the program. 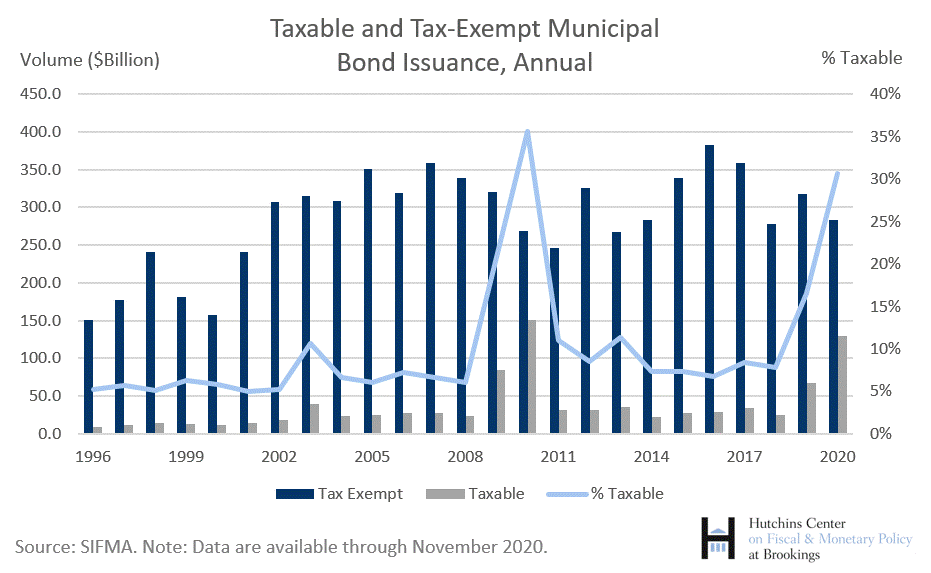 With significant attention on the taxable side, the supply of traditional tax-exempt dwindled substantially. The lower supply spurred a massive rally which propelled tax-exempt bonds – especially on the long end of the curve – to post some of the best gains the asset class had ever seen. To this date, the 12.90% year-end return for broad tax-exempt paper in 2009 remains the best-performing year for municipals in over 20 years.

Bottom line: If lawmakers create a new program similar to BABs in 2021, municipal investors could expect the market to behave and perform like it did during the 2009-2010 period.

Just like how homeowners refinance their mortgages, states and municipalities regularly refund higher cost debt to save money for them and their taxpayers. Under a current refunding transaction, an issuer could only refinance outstanding debt with new tax-exempt bonds within 90 days of the original bonds’ scheduled maturity or more often, its first call date. An advance refunding, on the other hand, essentially removes that 90-day window and grants more flexibility to municipalities to issue tax-exempt securities. Over the years, advance refundings became a valuable cost-savings tool for issuers and advance-refunded debt grew into a substantial component of the $3.8 trillion market. However, in late 2017, that ability to advance refund debt was all but eliminated following the passage of the Tax Cuts and Jobs Act (TCJA). Although state and local governments still had other options to restructure debt service – namely refinancing tax-exempt debt with new taxable bonds – the municipal market, in the eyes of many, did not function as optimally as it did in years past without this traditional tax-exempt tool. For example, last year when states and municipalities were shut down and struggling to recoup billions in lost revenues, many thought tax-exempt advance refundings could have certainly come in handy as interest rates fell to absolute historic lows.

Bottom line: Should lawmakers reinstate advance refundings, tax-exempt municipals could see a substantial bump in supply in the coming years.

For decades, the SALT deduction allowed filing taxpayers, particularly those who itemized, to deduct certain taxes that were paid to their state and local governments. Not surprisingly, this deduction was especially useful to residents of high-tax states because it helped offset their high property and sales tax burdens. However, this all changed when the deduction was capped at $10,000 after TCJA 2017 to accommodate the lower projected revenues of a 21% corporate tax rate. In direct response to this cap, the trading spreads of bonds issued by several high tax states such as New Jersey and California narrowed significantly in the subsequent years. Many have also debated the relationship between the cap and the increasing migrations out of these states and into states with little or no income taxes. Today, this bill is easily one of the more controversial initiatives: opponents claim the deduction benefits only the wealthy while those supporting the repeal have been adamant that middle-class households suffered from the higher tax burdens.

Bottom line: The market could see some volatility across high-tax state-issued bonds that have rallied if this $10,000 cap was eliminated, or even lifted to a new limit.

Having even an elementary understanding of how each of these policies could potentially affect the municipal market could provide investors with a strategic market advantage over others should any of these come to fruition. Although all three of these initiatives have garnered bipartisan support in recent weeks, we would not disrupt a long-term investment strategy in any of these cases. Even the infrastructure bill, currently the most promising of these three initiatives, is nowhere near a certainty given the current political backdrop. For example, if more lawmakers express concerns over record deficit spending or an overheating economy, we think there is a greater chance that none of these plans advance and subsequently no taxes would need to be raised. Although such a scenario may lead to potential outflows out of municipals, we do not believe long-term investors should be too concerned. After all, even if they may not be rising, taxes are inevitable and certainly need to be paid at the end of the day.

An investment in Municipal Bonds is subject to numerous risks, including higher interest rates, economic recession, deterioration of the municipal bond market, possible downgrades, changes to the tax status of the bonds and defaults of interest and/or principal. A bond’s call price could be less than the price the trust paid for the bond. Bonds typically fall in value when interest rates rise and rise in value when interest rates fall. Bond insurance covers interest and principal payments when due and does not insure or guarantee the value of any bond in any way.

Flavor of the Weak: Notable End to Some Key Winning Streaks