It has been almost a decade since the revelation that certain banks were manipulating the London interbank offered rate (Libor), a key benchmark for corporate borrowing worldwide. Since then, regulators globally have pushed to phase out Libor and replace it with new standards. In the U.S., the secured overnight financing rate (SOFR) has been established as the heir to Libor, but progress in the transition has been slow.

Along the way, the U.S. Treasury has been considering whether to issue floating-rate notes based on SOFR. We think initiating such issuance would let the Treasury use its immense platform within bond markets to lend credibility to the new reference rate, as well as to foster needed growth in the trading of SOFR-linked debt and derivatives. It would also expand the options available to address both U.S. borrowing needs and investor demand for floating-rate instruments.

The Federal Reserve and other global regulators have pushed to do away with Libor, which represents an estimate of the average interest rate a bank would be charged by other banks for an unsecured loan for a certain period. By contrast, SOFR – a measure of the cost of borrowing cash overnight collateralized by U.S. Treasury securities – is calculated using Treasury repurchase agreement (repo) market data and has been published daily by the New York Fed for the past two years.

To hasten the transition in the U.S., the Fed has set a timetable for new contracts based on Libor to be phased out by year-end, while existing ones are slated to sunset in mid-2023. Yet even as its demise draws nearer, Libor remains the prevalent benchmark rate in markets for derivatives such as futures, options, and interest-rate swaps.

Institutions have hesitated to be early adopters in a nascent SOFR market that lacks the broad-based liquidity of Libor-linked instruments. The longer they wait, the greater the risk that rival standards could take root, potentially splitting the market. Alternatives such as Ameribor and the Bloomberg Short-Term Bank Yield Index have received attention in recent weeks as potential challengers to SOFR.

Although issuance of SOFR-linked debt has been underway, it’s been largely limited to financial firms, with the first corporate deals emerging this year and no sovereign offerings. After a concerted effort by U.S. agencies including Fannie Mae and Freddie Mac to sell SOFR-linked securities a year ago, issuance has been gradually declining (see chart below), while derivatives volumes have only moderately increased in the past few months. 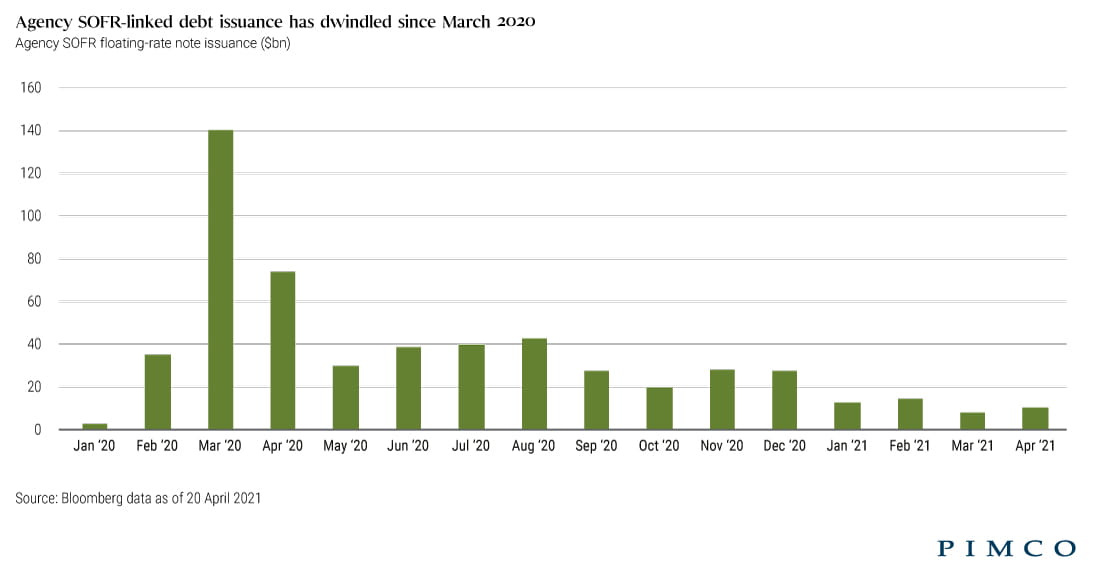 That has created an issuance gap, which Treasuries could help fill. In a 2019 study,Footnote1 the Treasury said adopting a one-year note tied to the new benchmark could help support the SOFR market and diversify U.S. funding sources. The study noted the possibility that SOFR-linked debt could cannibalize demand for two-year floating-rate notes, which have coupons that reset based on the rate for 13-week T-bills, and could affect the repo market as well.

We think the Treasury has a timely opportunity to explore this new market now. Selling SOFR-linked notes could expand the menu of U.S. bond offerings at a time of significant growth in debt issuance to finance efforts to combat the economic effects of COVID-19. It would also add another Treasury floating-rate instrument, after longer-term bond yields have risen sharply this year and as more investors are seeking ways to protect against possible further increases. Periodic issuance of longer-dated floaters could help establish a shape for the SOFR yield curve and the related term premium – or additional yield offered by longer-term debt – in a liquid market format.

To truly replace Libor, the broader economy and the financial system need a standardized short-term reference rate to link personal, mortgage, and corporate debt. The Treasury could encourage the standardization of SOFR with any inaugural issuance. Expanded usage of notes that reference SOFR will help improve investor confidence, deepen the market, and enable better price discovery for instruments based on this rate, all key steps along any path toward more universal adoption.

For more on what the Libor transition means for markets, visit PIMCO’s webpage on short-term strategies

Marc Seidner is CIO non-traditional strategies. Jerome Schneider is a managing director and leads short-term portfolio management at PIMCO. Rick Chan is a portfolio manager focusing on global macro strategies and relative value trading in interest rates. Tiffany Wilding is a PIMCO economist focused on North America. All are contributors to the PIMCO blog.

Do we have to taper tantrum again?

Bond Investing in the Face of Uncertainty: A Multi-Sector Approach

Did the Pandora Papers Open a Pandora’s Box?

Why We Aren’t Repeating The Roaring 20’s Analog