Inflation May Finally Jump In 2021

4. The Potential For Higher Inflation Just Ahead

Following the Great Recession and financial crisis in 2008-09, the Federal Reserve responded with unprecedented money creation, which was known as “Quantitative Easing.” Since then, the Fed has created trillions of dollars in new money, which mainstream economists were certain would lead to much higher inflation.

But much higher inflation never materialized. In fact, the Consumer Price Index (CPI) has averaged only 1.7% a year since 2009. After several years of higher inflation failing to materialize, most economists concluded something new must be going on and assumed sharply higher inflation might be a thing of the past, at least for the foreseeable future. This remains the view of the mainstream forecasting crowd today, for the most part.

Since the first of this year, however, I have been building a case for why inflation could rise more this year than the mainstream forecasters expect. Several of my most trusted sources seem to agree with me. We’re not predicting inflation will necessarily rise significantly this year, but what we are saying is the conditions for rising inflation are higher now than they’ve been in quite some time.

Meanwhile, the Federal Reserve is openly promoting significantly higher inflation, a quite unusual position for the central bank which has a mandate to promote stable prices. Since the first of the year, for example, Fed Chairman Powell has repeatedly said in speeches and congressional testimony that the Fed would be willing to tolerate inflation well above its 2% target before it would consider raising interest rates.

Today I will explain why I believe the odds for higher inflation this year are greater than they’ve been in over a decade. If correct, there could be considerable market implications. Let’s dive in.

The traditional inflation theory, you’ve heard this of course, is that more money chasing the same number of goods and services causes prices to rise. And there’s no question there is much more money in the system today than ever before, by far.

The federal government is running the most massive budget deficits in history, and the national debt has skyrocketed to almost $28 trillion. At the current rate of growth, which continues to increase under both Democrats and Republicans, the national debt is on track to top $30 trillion in the next few years. No country on earth has ever accumulated so much debt.

While the Treasury has exploded its balance sheet to nearly $28 trillion from about $6 trillion in 2000, the Fed has also ballooned its balance sheet from well under $1 trillion in 2002 to $7.4 trillion at the end of last year, by gobbling up Treasury securities and mortgage-backed securities. We have never seen anything like this in our history, not even during World War II when we took on the largest debt in our nation’s history at the time.

This unprecedented growth in the money supply should have already resulted in much higher inflation, but it hasn’t. The question is why.

Money supply growth and more money in Americans’ pockets usually translates to more consumer spending. But the surprising thing over the last year or so is that many Americans chose to save their stimulus checks or pay down debts. Many were so concerned about the COVID pandemic they decided to sock their stimulus checks away rather than spend them.

The result was that trillions of dollars in stimulus payments which would normally have fed into increased consumer spending went into savings or to pay off debt instead. This meant the expected big boost to the economy didn’t happen for the most part.

What we have learned from the COVID crisis is that just because the money supply spiraled, and many Americans had much more money in their pockets, that didn’t mean they were going to spend it, as they normally would have.

As a result, we haven’t seen the expected jump in inflation which many economists expected late last year. The question is, what should we expect of consumers going forward. The answer, I believe, is tied to our success in getting the COVID-19 pandemic under control.

Although no one knows when exactly that will happen, there seems to be general agreement among the scientific community that we will get the virus under reasonable control later this year. This remains to be seen, of course.

However, what we do know is Americans are sitting on a record amount of cash, with most experts suggesting it is $2 trillion or more (some say it could be double that), the largest hoard in history by far. Most economists also agree there is potentially record large pent-up demand by consumers who have scaled-back purchases over the last year or so.

The bottom line with regard to the economy is whether we’ll see a significant rebound in consumer spending – which accounts for over two-thirds of GDP – in the months ahead… or not. Time will tell.

The Potential For Higher Inflation Just Ahead

As you can see, there are no easy answers here. The main question is whether we get COVID under control just ahead. Currently, the trends look favorable in terms of infections and hospitalizations. If this continues, then I would agree consumer spending could come back strongly in the second half of this year, as most economists seem to expect. 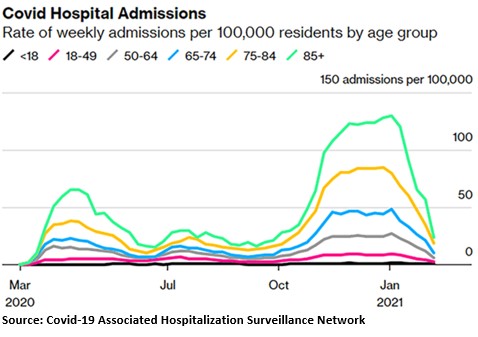 In that case, there is no question there’s a lot of pent-up demand out there and as noted above, consumers are sitting on a boatload of cash they could spend. If this turns out to be the case, then we could indeed see potentially significantly higher inflation just ahead.

On the other hand, if the COVID virus is not contained, US consumers could remain on hold. In that case, the expected rebound in spending might not materialize. If that is the case, the economy could remain restrained awhile longer.

The good news is this is not the most likely scenario held by most forecasters today. The economy rebounded strongly in the 4Q of last year. The Commerce Department reported last week that 4Q GDP rebounded at a 4.1% annual rate.

In following, several prominent forecasters issued new stronger economic predictions for the first half of 2021. While such new forecasts are still coming in as this is written, it appears most of the economists’ estimates for 2021 growth are quite encouraging.

There is one major unanswered question, however: Will US consumers return to their pre-pandemic spending habits once the virus is under control? No one knows the answer. It remains to be seen if the COVID-19 crisis has inflicted a permanent change in consumer spending habits. Only time will tell.

Thus, I believe it is a bit early to endorse these rosy forecasts for 2021, but I must say they are at least encouraging. But again, it all depends on our success in battling COVID and how consumers respond after the pandemic is behind us. That outcome remains to be seen.

The point is, if we have success in controlling COVID, then I believe we could see a reasonably strong economic recovery this year. Depending on how consumers respond, we could see a meaningful boost in inflation for the first time in decades just ahead.

Historically, higher inflation is bad for most bonds (convertible bonds not withstanding), since interest rates tend to rise when inflation rises. Yet higher inflation has had mixed results for stocks. Sometimes higher inflation means companies can raise prices for the goods they sell, thus increasing profits, but the results can be mixed.

Sometimes higher prices can have beneficial results, but other times just the opposite. Higher prices can increase inflation, leading to higher interest rates and potential recession.

Here’s my advice: If you are overweight in traditional bonds such as Treasuries and corporates, I would reduce exposure now. This advice does not apply to convertible bonds and in particular those managed by Wellesley Investment Advisors.

As for stocks, I wouldn’t make any big changes yet, but prepare to make reductions there also just ahead. Things are too uncertain now to make big shifts in equities, but that might change soon.

I will keep you posted.