No Single Story to the COVID Recovery

Followers of baseball statistics will recognize K as the abbreviation for a strikeout. For the pitcher, a strikeout is cause for celebration; for the batter, a defeat. Baseball season is over, but the American economy is seeing a lot of Ks: while some are celebrating, others feel defeated.

After the COVID economic crash, much speculation centered on the shape of the recovery to come. Various letters were used to trace the prospective course of gross domestic product (GDP). Optimists hoped for a V-shaped pattern that would see activity rebound as quickly as it declined. Pessimists feared an U-shaped progression in which the economy would be depressed for a long period. Ultimately, it appears we will have some hybrid between the two, forming a strange square root shape.

But all of these depictions of overall performance mask what is going on below the surface. In reality, we are seeing deeply divergent outcomes across society, which together paint a picture of a two-tiered, K-shaped recovery.

Those on the upward trajectory of the K are having a year marked by altered routines, but good economic fortune. Knowledge workers who can do their jobs remotely have settled in reasonably well. Social gatherings and travel plans have been disrupted, and households with children have been put to the test. But for this first group, prosperity remains in place.

Those more fortunate have put some of their disposable income to work by investing in their homes or purchasing new ones, driving strength in the housing market despite the recession. They have the means to make down payments and take advantage of low mortgage rates. Families in this category are more likely to own stocks, and have enjoyed the substantial gains produced by equity markets over the last six months. 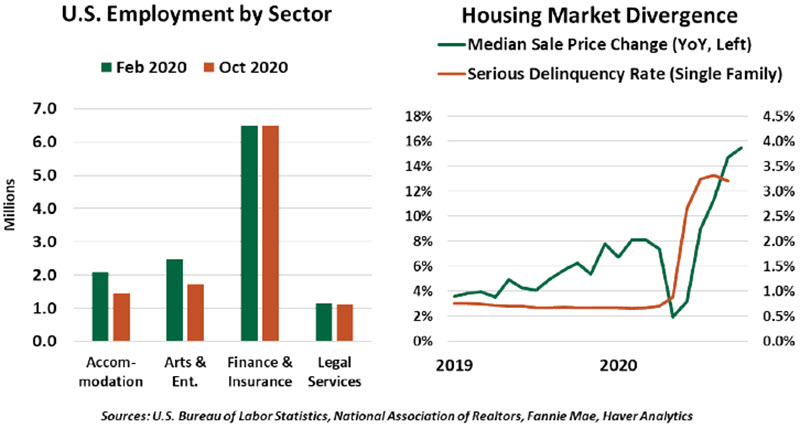 Contrast this with the experience of workers in basic service industries and small businesses. Job losses during the wave of shutdowns have been widespread and indiscriminate. Additional unemployment support for U.S. workers was generous but short-lived. Those who continued working were often essential workers who risked viral exposure to earn a living. And the path downward has not yet reached its bottom: programs like U.S. eviction and foreclosure moratoria and special unemployment benefits will expire in the months ahead.

Those on the lower leg of the K have not benefitted from strong financial markets. The Federal Reserve’s triennial Survey of Consumer Finances (SCF) found that more than a third of working-age families in the U.S. did not participate in a retirement plan, and less than a third of lower-income families owned any equities. Those in the lower half of the American wealth spectrum have almost no net worth, and no savings to buffer against economic disruption.

“There is no single story of economic recovery from COVID-19”

There are a number of other K-shaped formations in today’s economic arena. Equity markets reached record highs not long after the unemployment rate set a record of its own. Residential house prices have climbed while mortgage delinquencies have grown and commercial real estate has struggled. And those broad characterizations gloss over wide divergences within individual markets. In commercial real estate, for example, warehouses and fulfillment centers are in tremendous demand as e-commerce remains the preferred means of shopping, while retail centers and developments in central business districts struggle to attract and retain tenants. 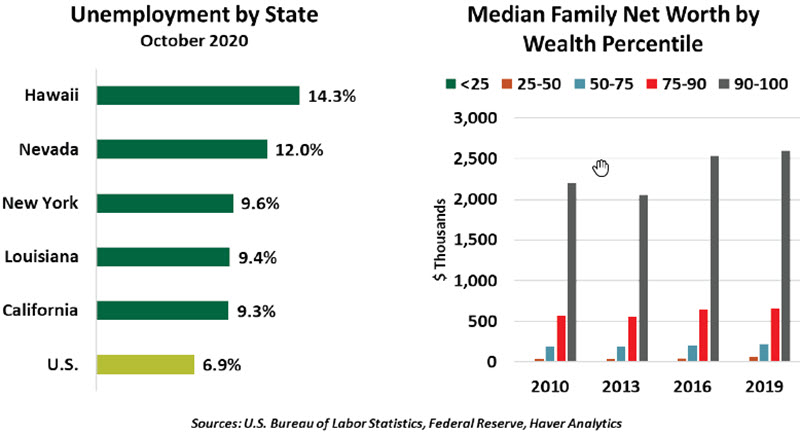 Corporations tell a similar story of mixed fates. While headlines have led with stories of broad indices reaching record highs, sectors like technology and e-commerce have soared, while impaired sectors like hotels and airlines have struggled.

Most large firms have been well-positioned to ride out this recession and even continue growth. This stands in contrast to small businesses, which have struggled from the start of the lockdowns. Support for small businesses through the Paycheck Protection Program (PPP) was innovative but is now in the past. The Fed’s Main Street Lending facilities were meant to improve access to small business loans, but smaller firms faced a problem of low demand, not a loss of access to credit. As more small- and medium-sized enterprises close, more of the market is left for larger competitors.

Some states have seen very limited increases in unemployment, while others have seen joblessness remain elevated. Fortunes across ethnic groups have also diverged.

A stratified economy following a recession is not new. The global financial crisis of 2007-2009 created lasting fractures: families who lost their homes in foreclosure, or who labored for years through underwater home equity positions, took a long time to feel the recovery. The gap in unemployment by educational attainment stayed wide in the aftermath of that recession, with college-educated workers getting back to work years sooner than those with only a high school education.

The tail end of the prior employment cycle saw great progress in inclusive growth, with minority workers closing a long-running employment gap. As of 2019, the U.S. poverty rate had fallen to a record low of 10.5%. A persistent wealth gap had taken shape, with lower-income households not sharing in the gains seen by high earners, but opportunity to work was ample. Many of those advances have now been undone by the COVID crisis, and the outlook for recovery is uneven. Sectors and regions dependent on travel, tourism and free movement of people will remain impaired until a vaccine against the virus is widely disbursed.

“Pent-up demand will fuel growth, while pent-up debts will be a drag.”

Recent vaccine headlines have built our optimism, but what will those first post-COVID years look like? Consumers who are thriving in the current downturn will bring economic momentum, making up for lost visits and cancelled travel. But many who are on the margin will find the year 2020 to have dug them into a deeper hole. A Census Bureau survey found nearly six million Americans expect to face eviction in the next two months, while the “vast majority” of student loan borrowers who went into forbearance will face bills due next year. Younger workers are starting their careers to find employers cautious about expanding, a circumstance that also challenged graduates during and after the global financial crisis.

Some inequality is inevitable in a free-market economy. But persistent and dramatic inequality can become a systemic risk. Aggregate demand growth will be weakened, as those in lower income levels are the most likely to spend, boosting demand; those with more assets are more likely to save. Social support programs will be stretched, and political debates will grow only more divisive.

Bringing the two tracks of the K-shaped recovery back together will not be easy. In the near term, workers who have been displaced can use more support. Research is finding that at-risk workers were likely to save their economic impact and supplemental unemployment payments. While that savings has helped to cushion the impact of the crisis, it is being depleted. Negotiations for further stimulus have fallen flat and are unlikely to progress before the next presidential inauguration.

In the longer run, the policy prescriptions to remedy inequality are politically thorny: Higher taxes on higher earners and more tax incentives for lower earners. More funding for education, for students of all ages. Higher minimum wages with stronger worker protections and social safety nets. Any one of these proposals would be a challenge for a progressive administration to pass; after the divided outcome of 2020, all of them seem out of reach for years to come.

We share this essay in a week shortened by the U.S. Thanksgiving holiday. As a team and individually, we have many reasons for gratitude despite this challenging year. But we cannot lose sight of those who struck out in 2020. The game will go on, and we must all ensure they get another chance at bat.