Editor’s Note: This is the second in a series of pieces that will examine key economic issues surrounding the 2020 U.S. election.

No one can avoid the doctor’s office forever. Whether for routine checkups or emergency interventions, everyone will have the experience of being a patient: first receiving care, then paying for it. Especially on the latter front, the U.S. healthcare system has many opportunities for improvement—a familiar debate now recurring in a new context.

The U.S. healthcare system is a complex patchwork of medical providers and payers. Payers include private insurers and government programs like Medicare, Medicaid and Veterans Affairs. Half the population has private insurance through an employer, while a third use government services. There is relatively little expense discipline in the system, which has allowed medical costs to escalate at rates that are double the rate of general inflation. Employers and workers pay ever-higher premiums, patients pay high deductibles and co-pays for care, and insurers face rising prices charged by providers.

Public spending on healthcare has reached 6% of U.S. gross domestic product (GDP) and is projected to rise, compounding the nation’s fiscal challenges. Demographics will continue to escalate government payments for healthcare, as more of the aging U.S. population becomes eligible for Medicare. 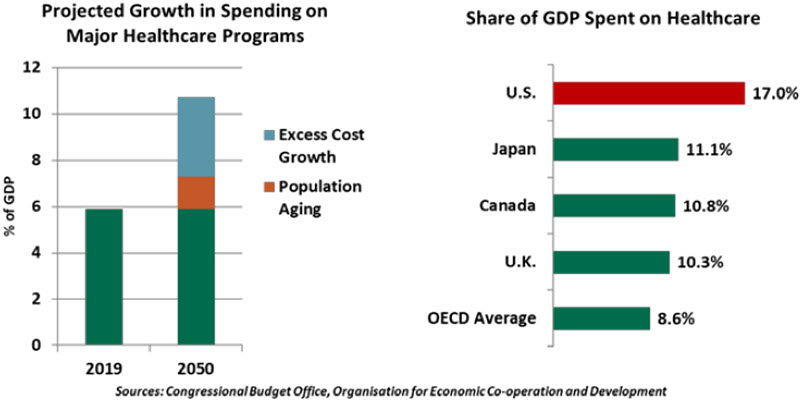 The most recent reform to the healthcare system, the Patient Protection and Affordable Care Act of 2010 (ACA), made only marginal changes. The core of the legislation opened greater access for individuals to purchase private insurance, and it included a few reforms like eliminating exclusions for pre-existing conditions and lifetime coverage caps for chronically ill patients. However, it did little to contain costs, and despite creating a coverage mandate, over nine million Americans remained uninsured after its passage. In the decade since, political and legal challenges to the ACA have left it weakened.

Rising costs and growing demand for this essential service have made clear the need for further legislation. The two presidential candidates’ proposals on this front vary widely.

A Biden administration, with the support of a Democratic-controlled Congress, would prioritize further reform. Candidates in the Democratic presidential primary aired a wide range of ideas, including a dramatic move to a single-payer Medicare for All model, in which government programs are expanded to replace the role played today by private insurers. Joe Biden does not endorse Medicare for All, but its mere discussion reflects the push for reform from within his party.

Instead, Biden supports more modest reforms. He would advance a public option, making government-run insurance available to people who do not currently qualify for a government program. He has proposed lowering the Medicare eligibility age from 65 to 60. He seeks to build on the ACA by lowering the cap on the share of income that households spend on their insurance premiums, and increasing the cost index to compensate for a more useful level of coverage.

Health care costs much more in the U.S., but outcomes are no better than they are in other countries.

Those changes are expensive propositions. On balance, the Committee for a Responsible Federal Budget estimates the Biden proposals would add $850 billion to the already-growing budget deficit in the next 10 years. However, they do expect his reforms would extend coverage to another 15 million uninsured people and would likely make a small reduction to overall healthcare costs.

Healthcare has not been a focus for the Trump administration. Trump’s 2020 platform aims to reduce government spending; if re-elected, he may seek to reduce eligibility for programs like Medicaid. Though this would contain costs, it would leave more Americans without insurance.

Even predating the current presidency, the Republican Party often promised to “repeal and replace” ACA, but they have not offered a concrete alternative. An ACA repeal vote narrowly failed in the Senate in 2017. Meanwhile, specific protections afforded by the ACA, such as ending preexisting conditions and allowing children to stay on their parents’ coverage until age 26, are individually popular. Should Trump win reelection, the healthcare status quo will likely broadly continue. 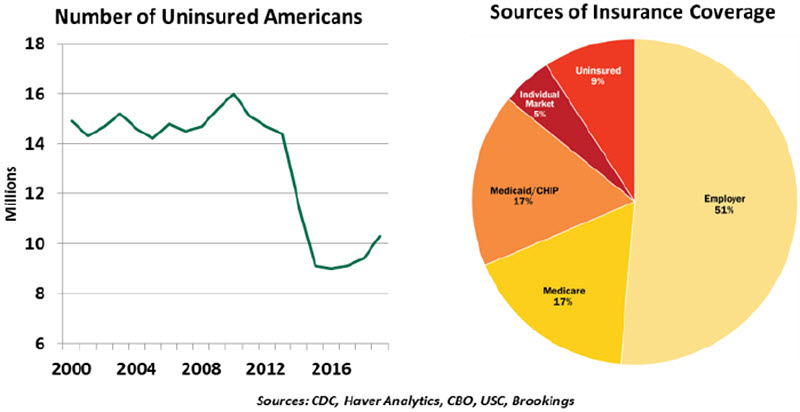 Under divided government, common ground for reform will be quite limited. One potential area of cooperation will be in reforming prescription drug pricing. American pharmaceutical prices are high, especially relative to what other countries pay; the market presents many opportunities for reform. Repeal of a law that prevents Medicare from negotiating drug prices is one place to start. Prices may be indexed to global reference prices, stopping the practice of charging more in the U.S. for medications available globally. Legal reforms that relax patent protections on drugs to support generic alternatives, and antitrust action against large pharmacy benefit managers, may find popular support.

The pandemic will change the discourse around healthcare reform.

Longtime U.S. political observers may feel weary debating healthcare reform yet again, but the conversation is different this year. As COVID-19 spread, layoffs surged, jeopardizing access to healthcare for millions just as they faced greater risk of needing medical attention. The Congressional Budget Office estimates 1.3 million people have lost insurance due to permanent job losses during the pandemic. A survey published by the National Bureau of Economic Research found that residents of areas highly affected by COVID-19 showed a greater inclination toward expanding government healthcare programs.

The virus has also prompted a push to bring pharmaceutical production back to domestic facilities, to help ensure a ready supply while also supporting a de-globalized trade agenda. However, drugs are made where the costs are lowest, and pills are easily shipped. Restoring production in the United States may require subsidies to offset higher U.S. labor costs.

Healthcare debates involve a number of difficult topics: the best way to provide a vital service, the role of government, higher taxes and social support. Each taxpayer and provider is also a patient; the cost, quality and availability of care are difficult to balance. Reform will not come easily, but the cost of inaction will only grow for all of us.

COVID-19 is challenging family dynamics around the world. The new normal of working from home, with many childcare facilities closed, is causing significant challenges for working couples and their young ones. Those from weaker socio-economic backgrounds have struggled the most.

During the pandemic, women are spending more time on domestic routines, weighing on their productivity. As an example, submissions from women to academic journals have plummeted since the onset of the pandemic. The added burden has forced some to either quit their jobs or reduce work hours, not a good outcome for personal finances and the economy.

But the issue of child care was prominent before COVID-19, and it will be prominent afterwards. Without quality care that is affordable, families and economies will not reach their potential.

Maintaining a balance between getting work done and providing care can be very difficult for working parents, especially mothers. Though the amount of time that men spend on domestic duties has been increasing in recent years, women remain the primary caregivers. Data over recent decades shows that the presence of children keeps women from entering the labor force. This effect is particularly strong when the children are below age six. Limiting the share of women who are able to work reduces the size of the labor force and thereby potential output.

While a sizeable proportion of women voluntarily stay home with their children, many have no choice. Some are pushed out of the labor force by the cost of day care, which makes working seem less financially worthwhile; even if they resume their careers later, their long-term earnings potential never recovers. Access to care is a particular problem for low-income families, which can tend to exacerbate income inequality within societies.

Childcare costs have been rising rapidly in many parts of the world, particularly in the U.S., where they have more than doubled over the past two decades. This is a major factor in discouraging women’s participation in the labor force. At the other end of the scale are countries like South Korea, Sweden and Germany, where couples spend 5% or less of their average wages on child care due to government benefits and programs. Evidence from Germany shows that expanded public child care increases fertility and boosts the size of the work force. 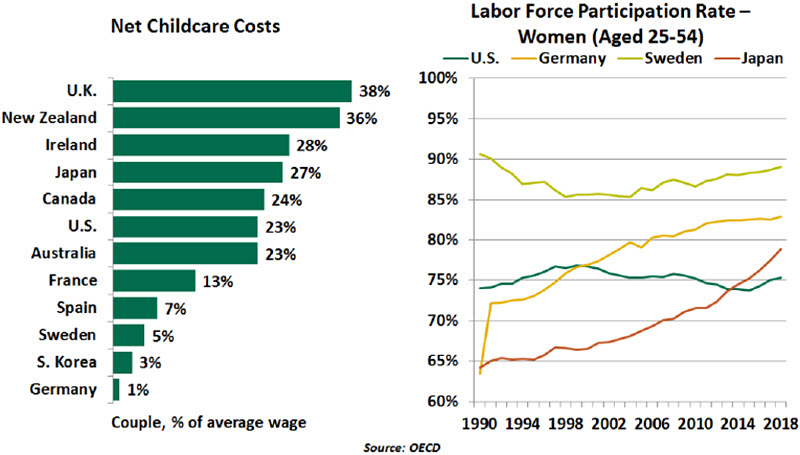 High costs and low government support are a key reason why the employment/population ratio for women has stalled in the U.S. over the past three decades and lags behind most advanced economies. The United States lacks a national policy on child care and doesn’t guarantee paid maternity leave. Among Organisation for Economic Co-operation and Development (OECD) countries, the United States ranks 29 out of 37 in terms of the employment/population ratio for women, even behind socially conservative Japan.

Quality child care can also be valuable to children academically. The benefits of early learning in children are well documented. According to various government and think tank estimates, for every dollar spent on early childhood education programs, the economy gains up to nine dollars of economic benefits down the line. The early learning years are vital for building the foundation needed for greater education attainment and earnings in adulthood.

With all the focus on flattening the pandemic curve, governments should use this as an opportunity to steepen the childcare and women’s labor force participation curves by offering high-quality and affordable programs to care for and educate preschoolers. If successful, these efforts could push world economies up a steeper curve, as well.

A reader dropped us a note of response to last week’s piece on U.S. fiscal policy in the wake of the 2020 election. He noted that when American government debt first hit 100% of gross domestic product (GDP) in 1946, it receded quickly. With government debt back at 100% of GDP for the first time since then, he asked why history couldn’t repeat itself.

After giving the matter some thought, we offered the following reasons that a recurrence was highly unlikely: 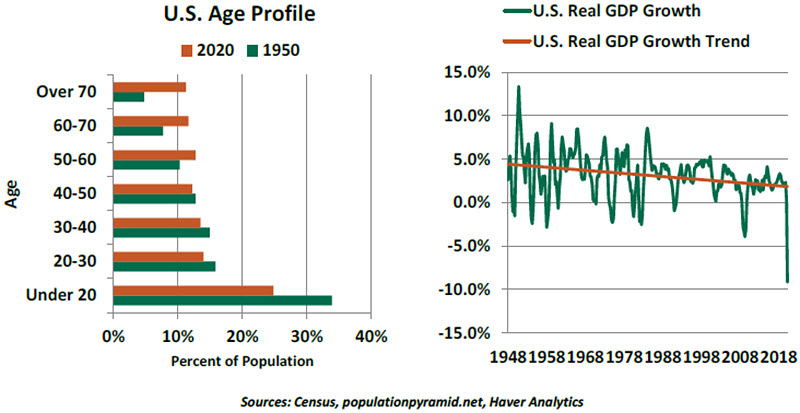 The U.S. escaped a heavy debt burden 75 years ago, but the ingredients that helped back then are no longer in place.

Average annual real U.S. GDP growth has been trending gradually downward over the past 75 years, from almost 5% immediately after the War to around 2% more recently. It seems very unlikely that we will grow our way out of our current debt problem in the same way we did back then.

Fortunately, interest rates are lower today than they were in the 1950s, which helps keep interest costs under control. But as we noted last week, this one favorable comparison to the postwar years may not last forever.