Invitations to each summer’s central banking conference in Jackson Hole, Wyoming, have historically been greatly limited and highly coveted. The pandemic forced this year’s edition to take place virtually, and the host of the event, the Federal Reserve Bank of Kansas City, opted to make the live proceedings available to the public. The opening day drew more than 62,000 viewers.

Technology wasn’t entirely cooperative; the opening speech from U.S. Federal Reserve Chairman Jerome Powell had some of the fits and starts that have become familiar to regular users of videoconference platforms. But Powell provided some clear and significant insights for the broader audience.

At the beginning of last year, the Fed initiated a review of its policy framework aimed at refining the objectives of monetary strategy and finding ways to communicate more effectively. Powell’s prepared remarks for this week’s summit summarized the content of the new framework, which was published as he spoke.

The economic experience of the second half of the past decade provided the impetus for the review. In spite of the strongest labor market the U.S. had seen in 50 years, inflation remained stubbornly low. The Fed’s macroeconomic models, which still factored in Phillips Curve effects, were proving increasingly unreliable. 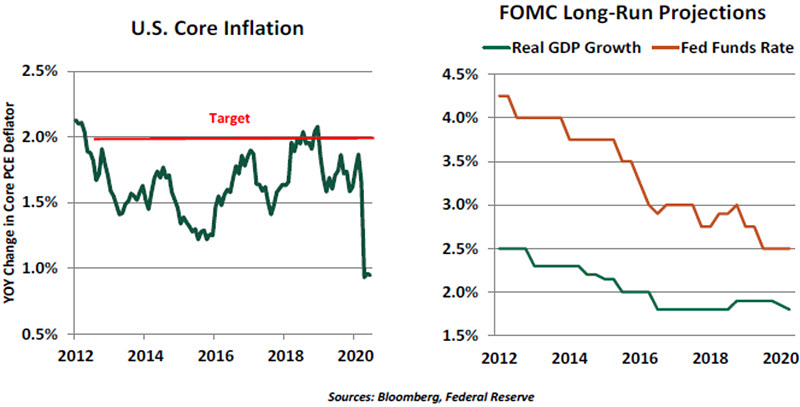 Further, the Fed’s long-run estimates of potential economic growth and equilibrium interest rates declined significantly between 2015 and 2019. Those quantities are important to the setting of monetary policy: they help to indicate whether activity is running hot or cold and whether financial conditions are easy or tight. Without accurate barometers, it is hard to gauge the economic climate.

As usual, academic papers and discussion were an integral part of the Fed’s review. What was unusual about the review was the series of 15 “Fed Listens” events around the country that sought to understand the impact of monetary policy in all places and at all levels of society.

The outreach was a clear recognition of the Fed’s sense of responsibility to the public. As Powell observed, “Public faith in large institutions around the world is under pressure. Institutions like the Fed need to aggressively seek transparency and accountability to preserve our democratic legitimacy.”

“The Fed’s listening tour proved to be very impactful to its thinking.”

The “Fed Listens” tour included an impactful stop in Chicago last summer. Representatives from community organizations spoke passionately about the importance of a strong job market to the quality of life for many citizens. At the time, the U.S. labor market was finally bringing opportunity to those who had been out of work for long periods, validating the Fed’s decision to refrain from raising rates even as joblessness fell below estimates of full employment.

The pandemic delayed and added impetus to the Fed’s review. In just two months, the U.S. economy lost all of the jobs created during the record expansion of the last decade, and then some. Those with more modest skills and wages have been hardest hit. It was clear from Powell’s remarks that he and his colleagues are dedicated to doing whatever they can to restore opportunities for those who have been displaced. 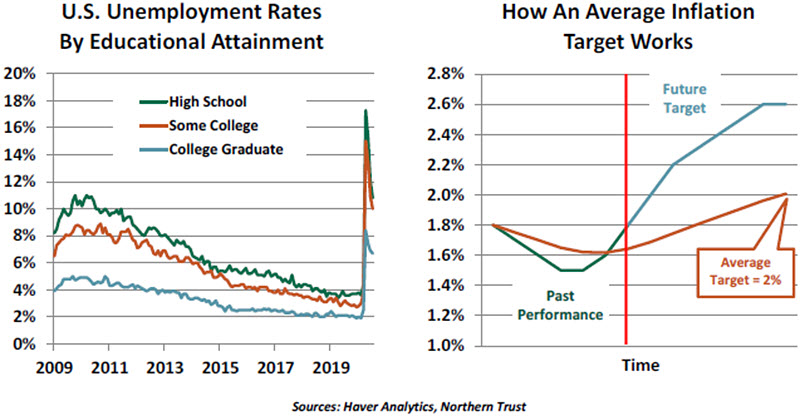 Having taken a great deal of time and care to arrive at the right strategy, the Fed was finally ready to release it to the public. Here are some of the key elements:

Taken together, the changes announced this week will likely lead U.S. monetary policy to be easier for longer, in the current environment and across the business cycle. The Federal Open Market Committee may take steps to incorporate this direction into the forward guidance it offers at its September meeting.

The updates to the Fed’s framework were carefully considered, and certainly not rushed. But questions surrounding its implementation remain. Powell insisted that policy setting would be flexible and not formulaic, meaning decisions will continue to be based on unobservable quantities (like the long-run equilibrium levels of unemployment and interest rates) and subjective judgment. Markets will still not have perfect clarity around how the Fed will react to different situations.

“The Fed cannot achieve its objectives on its own.”

As well, the Fed has still not demonstrated that it can achieve 2% inflation consistently. As we noted in our treatise on alternative inflation targeting regimes, raising the bar when you have failed to clear the last height might raise more questions than it answers. Both inflation and unemployment are subject to numerous domestic and global forces that are beyond the Fed’s control; the current pandemic is a prime example. Monetary policy cannot compensate for all of these limitations.

To accompany its new framework, the Fed released a series of discussion papers covering its views on unemployment benchmarks, the use of the balance sheet, and the influence of financial stability concerns on policy. We’ll be reading them closely, and will offer a summary for you next week.

Most major markets were on a reasonable economic footing before the pandemic struck the world, but Japan was an exception. Japan’s gross domestic product (GDP) has now contracted for three quarters in a row. Japan has seen a relatively smaller drop in activity compared to other major advanced economies, but that was due to its low starting point.

Last year’s sales tax hike weighed on Japan as the year started. The virus only made it worse. The state of emergency imposed from early April to late May ravaged the economy. Domestic consumption, accounting for more than half of Japan's economy, saw a record decline. Japan had pinned hopes on the $9 billion Tokyo Olympics for a turnaround in economic fortune, but those hopes will have to wait until next summer.

Exports, another vital economic driver, have also fallen sharply as global trade came to a grinding halt. While irreconcilable diplomatic and geopolitical differences between Japan and China remain, economic relations between the two remain intact. China is not only Japan’s biggest trading partner, but also an important source of investment and tourism. Weaker Chinese demand and supply chain disruptions are concerns for Japanese firms. The sharp drop in tourist arrivals (from 230,000 in January to just over one hundred in May), reflecting a decline in visitation from China, is putting further pressure on the economy.

Political uncertainty in the wake of Shinzo Abe’s resignation as prime minister is the last thing the Japanese economy needs amid an already uncertain geopolitical environment. Whoever takes Abe’s place will have to manage rising tensions with Japan’s two largest trading partners—China and the United States.

Two fiscal packages, equivalent to 10% of GDP, have provided some support to Japan, but are not enough to found a durable recovery. While the government is making efforts to restore economic health, its fiscal health is likely to decline, putting pressure on Japan’s massive debt burden.

While the outlook looks gloomy, COVID-19 presents an opportunity for Japan in some areas. Japan has a reputation for being a technologically advanced nation, but its adoption of certain technologies is quite low. Corporate and administrative cultures are partially responsible for the country’s poor overall productivity, which is the lowest among the G7 nations.

Working from home is helping to digitize and modernize Japan’s small-and-medium enterprise sector, which is known to rely on antiquated tools such as paper filing systems and fax machines. There are frictions: one-third of Japan’s population is over the age of 60, and it is a challenge to persuade a large aging population to embrace new technologies. 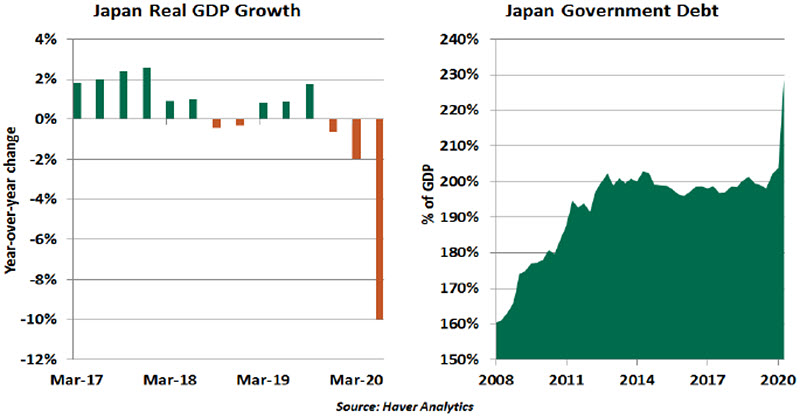 “The pandemic has likely wiped away some of the gains Japan made under ‘Abenomics’.”

As well, growing clamor for diversification of supply chains and concerns over China’s political and administrative structures could prompt higher inbound investments into Japan’s high-tech, robotics and artificial intelligence sectors.

Following the asset price bubble collapse in the early 1990s, Japan has experienced more than three decades of stagnation (low growth paired with low inflation). The economy was showing signs of awakening from its deep slumber prior to the pandemic thanks to the “Abenomics” program of aggressive monetary policy, flexible fiscal policy and structural reforms.

Unfortunately, “Abenomics” met its match in “COVID-nomics.” Japan will now have to search for a new cure for what ails it, and a new leader to administer tough medicine.

The U.S. housing sector has shown surprising resilience in the face of widespread economic uncertainty.

Optimistic forecasters saw the upside potential in housing. Mortgage rates are low, and a new category of buyers is seeking larger spaces for working, schooling and entertaining at home. These factors drove a variety of good news in the housing sector in the past month. Pending home sales saw their largest monthly increase since 2005, reflecting pent-up demand after buyers stayed home in the spring. Sales of both new and existing homes surged in July. Even the prices of construction inputs like lumber are rising.

A splash in the housing sector casts a wide ripple. Builders and real estate agents stay employed. Housing purchases lead to other activity: buyers maintain and redecorate their new homes and expand their families.

“Housing has been a bright spot amid a challenging U.S. economic backdrop.”

Though recent news has been encouraging, the risks to the residential real estate market are clear. If buyers are motivated to find larger homes, smaller dwellings may be left behind. Thus far, this effect is emerging in areas with the highest urban rents. Zillow has observed that San Francisco saw an increase in listings in the city proper; StreetEasy found a similar trend in Manhattan. Occupants who can work remotely have the most to gain by leaving behind areas with high costs of living.

Rent prices are starting to reflect a shifting market. After growing steadily for years amid strong demand for urban housing, rents have slowed their appreciation as tenants reevaluate their options (and, in the worst case, face eviction).

The greatest downside risk in the year ahead will be an end of protections for homeowners. The CARES Act granted up to a year of mortgage forbearance. Households that have experienced hardship may face foreclosure next year, a disruptive event for those who lose their homes, and a supply shock to the market as foreclosed homes are re-sold.

Changes in the housing market are rarely rapid. Decisions to move are not taken lightly, and real estate transactions can stretch over many months. We will continue to monitor this sector for both good news and signs of stress to come.