Automation is the watchword for this age. Everyone seems to be striving to make things less manual and more formulaic. Human intervention is seen in some corners as unnecessary and inefficient. With more people around the world doing things more remotely during the pandemic, the drive to digitize has become even more important.

That spirit has been extended to the realm of economic policy. “Automatic stabilizers” are features of government budgets in many nations. They have been on prominent display this year, as many have kicked in during the current recession. While headlines have focused on the large discretionary fiscal packages passed by world legislatures, stabilizers are playing a major role in buffering the economic shock of the COVID-19 crisis.

The most common form of automatic stabilizer centers on unemployment. As a leading example, Germany’s kurzarbeit (short-time working) is a scheme under which employers reduce employees’ hours instead of laying them off when times are tough. The program kicks in when at least 10% of a firm’s employees have a loss of earnings of more than 10%. The workers need to fill out a form and get it signed by the employer. The government replaces up to 60% of lost income over a period of 12 months.

Programs like this seek to keep workers engaged with their firms, allowing for a faster recovery in employment when business improves. The program also enables employees to maintain their networks and to continue accumulating skills. As shown in the chart below, jobless rates in Europe remain well below those seen in the United States. 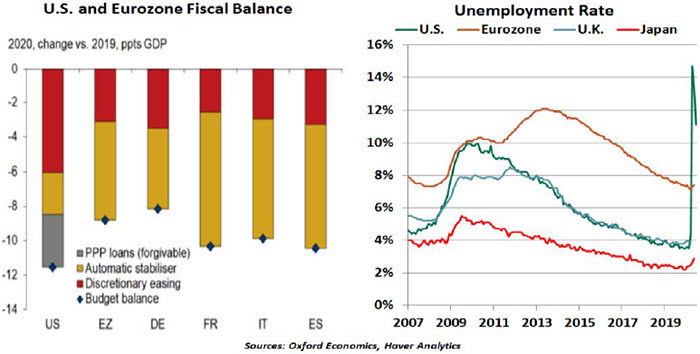 Automatic stabilizers like kurzarbeit are a more efficient way of providing support to a struggling economy than discretionary fiscal measures. They do not suffer from the time lags required to craft, approve and implement new legislation. Features or parameters can be adjusted swiftly depending on the intensity of the crisis; having a structure in place makes this easier than starting from scratch each time a recession arises.

The unemployment insurance (UI) program in the United States is a form of automatic stabilizer, but it differs in important ways from European models. UI programs replace a share of wages for workers who have been laid off but are looking and available for work. Most states provide less than half of workers’ weekly wages for a period of only six months, making it far less generous than programs seen in Europe. And those who have been laid off have to apply for the benefits, a process which has proven to be cumbersome during the pandemic. In the United States, the availability of employment support is automatic; the payment of that support is not.

“The United States relies on discretionary spending over automatic stabilizers, unlike Europe.”

In general, the United States has smaller automatic stabilizers compared to European economies, and has therefore relied more on discretionary fiscal measures to deal with the pandemic. According to Goldman Sachs, U.S. emergency spending will amount to about 13% of gross domestic product (GDP); automatic stabilizers will add only 2.7% of GDP. By contrast, major eurozone countries have appropriated emergency funds of about 3.6% of GDP, while stabilizers account for 6.5% of GDP. 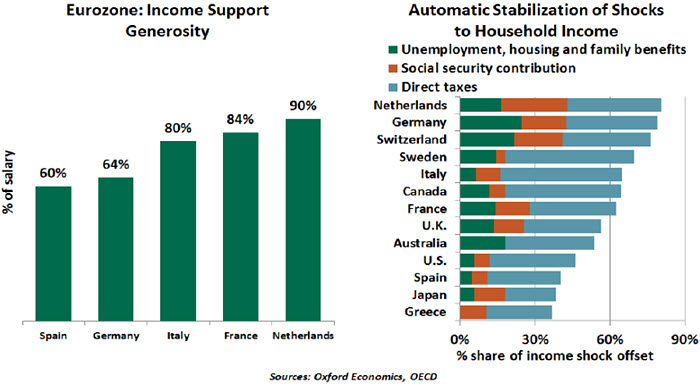 Within Europe, the size of automatic stabilizers differs significantly between countries. The generosity of the German income support scheme is relatively low compared to France and Italy.

These national differences of stabilizer programs have made it difficult for Europe to craft fiscal assistance for countries in need. Fiscally conservative states like the Netherlands are opposed to the proposed €750 billion “recovery fund,” which was debated by EU leaders late this week. Dutch taxpayers are reluctant to fund benefits in other countries that are more generous than what they receive at home.

Although an agreement on the European Commission’s compromised formula (mirroring the original) is possible later this month, the plan is unlikely to offer any immediate assistance, as disbursements will be linked to the EU’s next seven-year budget.

According to an Organization for Economic Co-operation and Development (OECD) study, automatic stabilizers are generally effective in mitigating the shocks to household disposable income in (high income)

OECD economies. On average, about 60% of a negative shock to income is offset by stabilizers.

“Automatic stabilizers are the first line of defense but not the only one.”

Automatic stabilizers enjoy a relative advantage over discretionary spending as they are timely and targeted, but there are a few negatives as well. Generally, more generous unemployment benefit schemes are associated with higher incidence and longer intervals of unemployment. Getting the incentives right is one of the great challenges surrounding aid programs of all kinds.

Stabilizers can be expensive, but properly designed automatic stabilizers can help limit the damage to public budgets. Finite expiration dates not only present strong incentives for workers to re-engage, but also serve to limit the cost of support programs.

Under unusual circumstances like today’s global pandemic, automatic stabilizers will not be sufficient. The depth, character and duration of the downturn have required all countries to extend themselves by adding substantial amounts of discretionary stimulus. Enacting the needed support has been a struggle: the U.S. Congress is at odds over the next round of aid and Europe has been behind the curve from the start. The time spent in negotiating has cost some workers their jobs and some entrepreneurs their businesses.

When conditions finally settle, countries should use recent experience to review and recalibrate their stabilization programs. A more algorithmic approach might save time, money and anxiety.

Ryan examines the downturn and outlook for public transit.

Cancelling my monthly train pass felt like conceding defeat to COVID-19. My tickets for April and May went to waste. Stopping my standing order was financially prudent, but it felt like the end of my connection to the office as I knew it.

I was far from alone in staying off the train. Public transit ridership fell rapidly as the crisis took hold, for intuitive reasons: Workers who were terminated or reassigned to work from home had no need for the service. Essential workers who could switch to commuting by car did so, largely out of fear of contagion in shared transport. While ridership has recovered somewhat from the lows of earlier this year, it remains well below its prior norms, in a pattern akin to restaurant reservations and smartphone mobility trends.

Public transportation is critical for getting people to jobs, medical appointments and recreation. Many workers do not own cars, and most large cities lack the road and parking capacity to accommodate every adult using a private automobile. Transit agencies have continued operating during the pandemic, despite the omnipresent health risk to their workers and the fact that most services operate at a loss.

The downturn did not affect all forms of transit equally. Commuters going to office jobs are staying home, and suburban rail agencies reported up to a 97% decline in passenger loads. Bus services, however, have remained in demand. Many bus riders do not have their own vehicles and are transit-dependent. They often work jobs that remained essential, and kept riding through the crisis.

The revenue picture for transit agencies is bleak. Train and bus services are primarily funded by a mix of ticket sales and a small share of local sales taxes. Both of these have been impaired in the current environment. Fares fell as riders stayed home, weighed further by some agencies waiving bus fare collection to minimize interactions between drivers and riders. Sales tax receipts fell as businesses closed, and they will take time to return to their former levels.

Agencies’ options for reducing costs to regain solvency are quite limited. Cutting service would hinder the ability of essential workers to reach their workplaces. And most agencies reassured riders by increasing the frequency and thoroughness of cleaning, at an additional cost.

Recognizing the importance of public transit, the U.S. government took action to support it. The Coronavirus Aid, Relief and Economic Security (CARES) Act allocated $25 billion to local transit agencies to help fill their revenue gaps from loss of fare income. For most agencies, this will make up for about a year of lost revenue.

Most transit agencies did not enter the crisis on a sound footing. Aging equipment, deferred maintenance and crowded vehicles will be a familiar refrain for transit users. Agencies run thin budgets that barely cover their expenses. Capital investment has also been hindered by the need to fund the pensions accrued by their large, unionized workforces. The solvency of mass transit is just one of many justifications for additional aid to state and local governments, which was advocated by former Fed Chairman Ben Bernanke in a recent editorial. 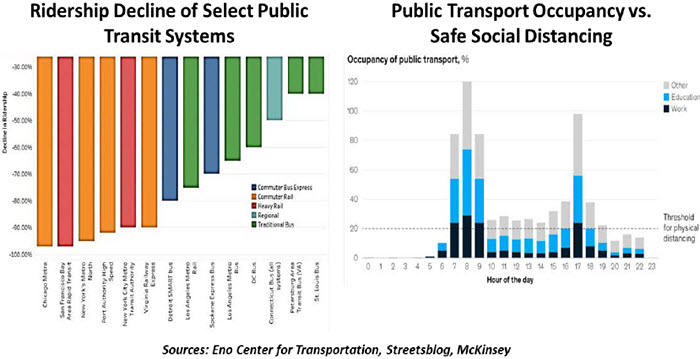 “Many public transit riders cannot change to driving their own autos.”

In the near term, as long as the virus continues to spread, the outlook for transit agencies will remain poor. The benefits of riding public transit – greater value, lower stress, less environmental impact – will no longer sway riders who can substitute with their own cars. Even the Centers for Disease Control encouraged employers to “offer employees incentives to use forms of transportation that minimize close contact with others.”

Transit will revive when riders feel safe, when workers need to return to work in person, and when auto traffic reaches untenable gridlock. But services will look different. Staggered shifts and remote work may call for adjustments to the schedule; the need for social distancing will prompt adjustments to seating.

Like many commuters, I have often griped about my daily routine. But I do look forward to the day when I’ll ride the train again. It will be a nice symbol of a return to normalcy.

“Inflation is everywhere and always a monetary phenomenon.” That observation from Milton Friedman has been taken as gospel by economics students for 40 years. With that in mind, a number of observers have become concerned that inflation could make an untimely comeback in the years ahead. The prices of gold and inflation-protected bonds have been very strong recently.

Stimulus programs aimed at offsetting the economic damage caused by COVID-19 have been immense, with many countries devoting amounts of more than 10% of their gross domestic product (GDP) to fight the recession. Central banks have formed partnerships with fiscal authorities in the effort, purchasing substantial amounts of newly-issued government bonds to help speed the relief.

To purchase these bonds, central bankers have been running their virtual printing presses. The money supply in a number of countries has consequently been rising rapidly.

“Money is not moving around the financial system very rapidly.”

When you have too much money chasing too few goods, inflation can ensue. But the amount of money moving through the economy hasn’t risen nearly as fast as the money supply. As we noted last week, households around the world are saving a lot more amid an uncertain economic outlook. So are banks: The amount of extra liquidity that U.S. intermediaries are storing with the Federal Reserve has grown by more than $2 trillion in the last three months. Lenders are understandably cautious about extending credit with so many unknowns clouding the outlook.

These frictions have had a pronounced effect on the velocity of money, which has fallen sharply. This is one factor limiting inflation; the continued presence of powerful secular factors that hold down prices is another. Gauges of inflation expectations have remained well-behaved.

None of this is to suggest that inflation will never darken our doorsteps again. There may come a day when banks, businesses and households loosen their grips and spend more freely, which would certainly create upward pressure on the price level. But that day seems like a long way off.