Banks Are Put To the Test, Smartphones Measure Movement, and the Poorest Are Hit Hardest

After surviving a crisis, societies frequently take steps to prevent a recurrence. Lessons are learned, root causes are identified, and new safeguards are implemented. “Never again” is often the mantra.

The limitation of that approach is that the next crisis rarely looks like the last one. The pandemic crisis we are currently experiencing has had a very different economic impact than the global financial crisis did 12 years ago. And that may spell trouble for banks. COVID-19, which has presented a significant challenge to public health, may threaten the health of some of the world’s financial institutions.

Banks were at the center of the storm in 2008. Years of aggressive underwriting had created substantial systemic risk. The invention and distribution of exotic financial products added layers of complexity. Risky instruments and operations were often housed outside of bank balance sheets, increasing leverage and stretching reserves.

When the housing market cracked in 2007, banks became agents of contagion. Their troubles threatened to bring the rest of the global economy down, and so they consequently became the focus of rescue and rehabilitation efforts. The optics troubled many (everything for Wall Street, nothing for Main Street), but preventing financial collapse was an effective way of heading off more widespread economic damage.

In the years that followed, financial re-regulation centered on the products and practices that were deemed responsible for the crisis. Most derivative products were moved to transparent exchanges; proprietary trading within banks was limited; underwriting standards were toughened; and firms were required to increase their capital bases, which are considerably stronger than they were 13 years ago.

Some countries achieved a greater degree of rehabilitation than others. Banks in southern Europe and in some emerging markets remain impaired. China’s banks are also thought to be vulnerable, having supported a substantial increase in the country’s leverage over the past decade.

In general, though, banks are in a much better positon than they were during the last recession. This time around, they are certainly not expected to need any public assistance, freeing policy makers to focus on those directly damaged by the measures taken to contain the virus. Small businesses, the travel industry and health care have all received reinforcement. Workers have been protected by expanded jobless benefits; vulnerable firms have been given direct aid and access to special credit programs.

“Banks are being counted on as part of the solution to the current recession.”

Banks are being relied upon to help implement government relief programs. In the United States, commercial banks are underwriting the Paycheck Protection Program and the Main Street Lending Program, with a backstop provided by the U.S. Treasury. The European Central Bank has provided a substantial amount of inexpensive funding to institutions in the euro area, with the stipulation that a large portion be used to make fresh loans. Banks around the world are either being required to or encouraged to offer forbearance to borrowers.

To facilitate these efforts, supervisors in many areas have taken a series of steps that allow banks to increase their leverage. Capital ratio calculations have been relaxed, and firms are being allowed to dip into the buffers that they have built over the past decade. Banks are not yet treating loans that are in forbearance as problematic, even though many of them may never be fully repaid.

Observers of the industry take a lot of comfort from the results of annual bank stress tests. The tests, which ask banks to substantiate their survival under very adverse circumstances, were among the more important post-crisis reforms. Failing a stress test was not uncommon in the early years of the exercise, but it has become a rarity today. That leads analysts to conclude that banks can withstand almost anything.

But the scenarios used by banks and supervisors to perform stress tests typically use the severities of the 2008 experience. The shock presented by COVID-19 has been swifter and deeper than anything that banks have ever contemplated: the U.S. economy will likely contract by more than 10% over the first two quarters of this year, more than double the loss of output imagined by the Federal Reserve’s most recent stress test. Past stress test results may therefore not guarantee survival this time around.

Banks and supervisors have been scrambling to update their capital assessments to account for these unusual circumstances. This is not an easy exercise: the models projecting loan losses were built using history that did not include such an extreme environment. A full accounting of the financial consequences of COVID-19, which could be used to recalibrate financial models, won’t be available for some time.

Further, an important volume of credit extension has moved outside of the banking system in the last decade, partly in response to post-crisis regulation. Private equity firms, asset managers and other intermediaries have become more important in some areas of finance, including mortgage lending to households and leveraged lending to corporations. The current recession is expected to put these areas under some stress.

“Some of the riskiest credit is held outside of the banking system.”

Our ability to assess the potential damage to non-banks is limited; they face much less stringent reporting and regulatory requirements. It is also difficult to assess what knock-on impact any failures in this space might produce for the banking system, which provides credit and a range of services to a broad spectrum of financial companies.

Given the many unknowns, some might question the recent relaxation of standards and surveillance for financial institutions. The stringency of both was critical in restoring public confidence in banks after the 2008 crisis. Should the economic effects of the pandemic prove more severe or more lasting, the sector we are counting on to sustain so many others may in fact end up needing support itself.

The COVID-19 crisis has brought attention to a host of new data sources that measure economic activity, from job postings to gasoline consumption. But the most versatile source for measuring our activity, and perhaps for finding a path out of the crisis, has been right under our noses all along: more specifically, in our pockets.

Smartphones are continually aware of their own locations. By tracking device movements, smartphone providers can create an aggregated view of the extent to which people are leaving their homes and moving about. Apple and Google, the world’s leading providers of smartphone operating systems, are using this perspective to offer a window into the economic recovery.

Apple’s Mobility Trends Reports tool counts the number of queries made to its Apple Maps navigation service. The locations, destinations and volumes of requests are tracked over time to detect trends in the quantity of people driving, walking or riding public transit. Google’s Community Mobility Reports are built on Google’s existing tracking algorithm, which identifies when Android devices go to various destinations. It was developed for features like showing road traffic and peak visiting times for places in Google Maps; now, it can show how many people are visiting various destinations. While the idea of being tracked may make some readers uneasy, the data is reported in an anonymized manner, and nothing that could identify the movements of a specific individual is ever disclosed.

Reports and underlying data are freely available. Trends are published at the national, state and county levels in the U.S., and to similar specificity around the world. Data lovers, beware: the volume of data and reports published by Google and Apple can be quite engrossing.

Mobility data has limitations. Both vendors are offering comparisons of current traffic against a pre-COVID-19 interval that occurred last winter. Even without a viral threat, users in cold climates would be unlikely to visit destinations like public parks and retail garden centers in the period covered by the baseline data. Despite the limitations of measurement, both mobility measures have shown increased activity since hitting a trough in mid-March, which can be taken as a sign of incipient recovery.

“More people leaving their homes is a sign of a recovery unfolding.”

Some might be worried about increases in mobility, fearing that the risk of renewed infection within the population might increase. But the data can be used to direct and manage reopening efforts. 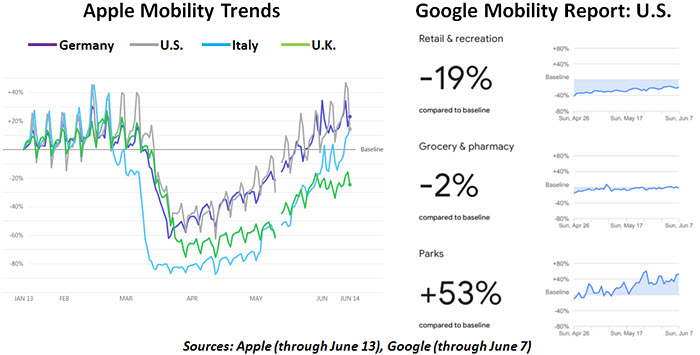 Smartphones can be used for contract tracing, enabling a more rapid re-opening. Contact tracing allows public health officials to respond to outbreaks more finely, recommending quarantine for a handful of individuals as opposed to closing down broad areas. When a person using a contact tracing app receives a positive diagnosis, other users who have been near that carrier in the past two weeks can be identified and advised to take a COVID-19 test. Apple, Google and several governments are creating apps to track individuals’ exposure to COVID-19 carriers. While users may resist the software out of privacy concerns, and a passing encounter with a viral carrier is not a guarantee of infection, even limited adoption would be better than heavy-handed lockdowns.

Public opinion surveys show persistent and understandable skepticism of returning to normal activity. Mobility data reflects this, indicating that although the worst of the slowdown is behind us, we have a long road back to recovery. Its use in tracking the outbreak may help us to make it down that road a little more quickly.

Typically, in every economic or public health crisis, it is the poorest sections of society that suffer the most. This time is no different. The COVID-19 outbreak has not only triggered an unprecedented economic crisis, but also a social emergency, particularly in emerging and developing economies, where cases are rising rapidly.

The pandemic threatens to reverse some of the reduction of global poverty that has been achieved in recent years. Even with recent progress, many poor families have no room to manage adverse income shocks, as many of their members work outside of formal labor markets. According to the World Bank, less than one-fifth of workers are covered by social insurance or assistance programs in low-income countries. While many governments implemented COVID-19 support measures for the poor, these efforts typically do not fully offset the losses from lockdowns. Millions of those in poverty, in low and middle income countries like India, are vulnerable to falling back into it.

The world is expected to witness the first net rise in poverty in over two decades. The World Bank estimates that COVID-19 could push more than 70 million people into extreme poverty, measured at the international poverty line of $1.90/day. Under a downside scenario, the number is likely to climb to 100 million. The lives of those already languishing in poverty have become unbearably difficult. Unsurprisingly, the sub-Saharan Africa and South Asian countries already reeling with distressingly high poverty rates are likely to see the biggest upsurge. Almost half of the projected new poor will be in South Asia, and more than a third in sub-Saharan Africa.

Societal unrest was already flaring up in many places before the virus took hold. The crisis will only deepen those grievances, as the poor struggle to gain access to basic health services and find their livelihoods at risk. Foreign governments and multilateral institutions will be called upon to provide aid, but it is not clear whether that call will be sufficiently answered. Many potential benefactors are struggling with their own economic challenges, and may not be willing to prioritize the world’s needy over their own citizens.

“The pandemic has forced the poor to choose between their lives and their livelihoods.”

Some complain about the confinement of working from home, but social distancing is not an option for many poor people in the world. They live in close quarters, and earn their livings in professions that present a greater risk of infection. We must recognize that while some of us are worried about the long-term costs of COVID-19, there are millions who are staring at an uncertain tomorrow.