Big Questions for Monetary Policy, New Ways Gauge the Decline, and the Fed Lends Dollars Around the

The U.S. Federal Reserve’s aggressive moves to support financial markets attracted a mix of wonderment, endorsement and admonishment. Its actions breached past boundaries, and reached far beyond the banking sector. The Fed was accused of creating moral hazard and favoring investors at the expense of ordinary citizens.

The year was 2008, and my family and friends were vigorously debating these topics at our Thanksgiving table. I was home for a brief visit during a three-month assignment at the Federal Reserve Bank of New York. All I wanted to do was indulge in family, food and fellowship; but my guests were obsessed with bailouts, bond purchases and bank failures.

In the present day, the Fed has been even more aggressive, giving new life to the concerns that were raised during the global financial crisis. And because elements of the Fed’s playbook have been adopted around the globe, those concerns are again being debated in a number of world capitals. In this essay, we will attempt to provide some answers to the central questions surrounding crisis-era monetary policy.

1. Will All of This Easy Money Lead to Runaway Inflation?

Over the past two months, many central banks have stepped up their purchases of government securities, while others are doing so for the first time. Mechanically, the central bank creates money to purchase the securities. Governments use the proceeds of the borrowing to stimulate the economy. In essence, the printing press has been revved up in an effort to support demand. 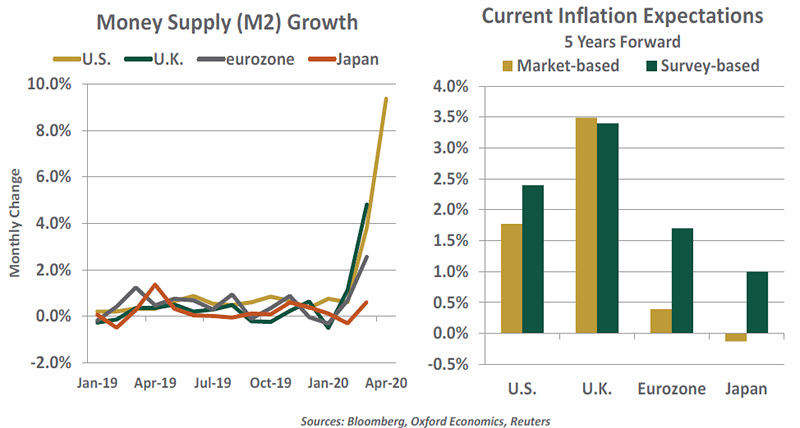 Using data through the late 1970s, Milton Friedman asserted that inflation is everywhere and always a monetary phenomenon. Recent increases in money supply growth have consequently made some observers uneasy.

But the link between money and inflation had been fraying over the course of the last thirty years, due to globalization and technology. Central banks long ago abandoned money supply targeting in favor of inflation and interest rate targeting. Further, the expansion that just ended was characterized by persistent downward pressure on the price level, despite low levels of unemployment and money supply growth averaging nearly 6% per year. Our thoughts on why inflation has been so low can be found here.

“Deflation, not inflation, is the bigger risk at the moment.”

The expansion of central bank activity has yet to register meaningfully in inflation expectations, which remain very low in most countries. The recent collapse in global demand probably makes deflation more of a near term risk than inflation, an outcome that frightens central bankers because it is difficult to dislodge.

The day may come when inflation moves ahead more rapidly than we would prefer. But that day does not look imminent. And when it arrives, central banks have the means to restrain the price level by raising interest rates.

2. Is Relief Going To The Right Places?

Internationally, there remains lingering bitterness over the bank bailouts of 2008. Some countries took direct stakes in their national champions (which many governments still hold), while others offered other forms of support to financial companies to protect the financial system.

If that system were to fail, it would have serious consequences for big portfolio managers and small savers alike. Lives and livelihoods could be irreparably damaged. Assistance provided to markets and financial institutions has broad public benefit, but many in the public don’t see it that way.

Central bank efforts this time around have not yet been directed at commercial banks, many of which are in much stronger positions than they were in 2009. But the programs that central banks are facilitating to aid certain asset markets are once again raising eyebrows. Initially, it might appear that investors are the ones getting a helping hand. But if that assistance helps credit to flow freely through the economy, it benefits a much wider community of stakeholders.

Central banks should focus on two things to bridge the gap in understanding. The first is communication: frequent, plain-spoken and properly positioned. The second is transparency: programs should be comprehensively audited, with the results made available to the public.

3. Have Central Banks Given Away Their Independence?

During past business cycles, cuts in interest rates were usually sufficient to combat recessions. But when this recession arrived, there was little room for central banks to employ that tactic. Collaboration between central banks and legislatures is likely the only way for policy makers to inject sufficient relief into the global economy with sufficient speed.

This has not always gone down easily. The new governor of the Bank of England, Andrew Bailey, has consistently rejected “monetary financing,” even though the Bank has engaged in a new round of government debt purchases. The worry is that when the day comes to consider stepping back, central banks may be at odds with the government’s wishes. The partnerships forged today may make it hard to divorce when the time comes.

“Central banks had little choice but to collaborate closely with fiscal authorities.”

That is certainly a risk. History is littered with examples of close coordination between monetary and fiscal policy leading to economic disaster. Since the late 1970s, central banks have been the grownups in the room, following sensible long-term policies that lean against fiscal excesses. They have largely remained above the politics that can muddy decision-making on parliament floors.

But central banks are given mandates by their governments that require them to pursue low but stable inflation and (in some cases) maximum employment. It is the pursuit of these objectives that has informed their recent policies.

The only fair way to judge policy is to compare outcomes with what would have happened in the absence of any intervention. We will never know how things would have turned out had central banks sat on their hands. And we should all be thankful for that.

How bad is it?

It’s such a simple, casual question. But in the midst of a historic downturn, describing severity is a real challenge. Things are changing so quickly that standard economic metrics can’t keep up.

The more traditional data points are just beginning to reveal the depth of the damage. Last week, we learned that economic contractions officially began in the first quarter in the U.S. and Eurozone. Today, the U.S. Bureau of Labor Statistics announced record job losses last month. These indicators are just starting to show the depths of the downturn, but we still wonder how far it will go. And how will we know when we have turned the corner?

A variety of non-traditional sources are helping us to map the current cycle. For labor markets, the online job posting platform Indeed tracks a variety of metrics in its Hiring Lab, which covers every region and industry. As of May 1, postings around the world in 2020 are down 39.3% from the same period in 2019. The divergence started in the second week of March as employers realized a contraction was likely. Regions more dependent on tourism, from New Zealand to Florida, are showing the greatest loss of activity.

Restaurant reservation platform OpenTable publishes data showing the quarantine’s effect in real time. By March 23, reservations booked on the site had fallen by 100% worldwide. The trend grew daily as virus worries took root and quarantines were formalized. While many restaurants are scraping by with takeaway and delivery, none have the need yet to book sit-down reservations.

When deciding on a restaurant, whether dine-in or carry-out, consumers will often check for reviews on sites like Yelp. Each quarter, Yelp publishes reports of economic activity, and those insights have never been timelier. In the month of March, over 175,000 U.S. businesses reported temporary or permanent closures, including more than 48,000 shopping establishments, 30,000 restaurants and 24,000 beauty businesses. The decline in search activity was akin to patterns observed after natural disasters, but worse. New York City is experiencing a slowdown greater than that of eight Hurricane Sandys; Houston, the equivalent of four Hurricane Harveys.

Even some government agencies are sharing insights that keep a pulse on real-time activity. The U.S. Transportation Security Administration posts a daily count of passengers screened for air travel. Since late March, every day has seen foot traffic of less than 10% the volume seen in 2019. This simple daily indicator will be a useful gauge to judge a return toward normal. 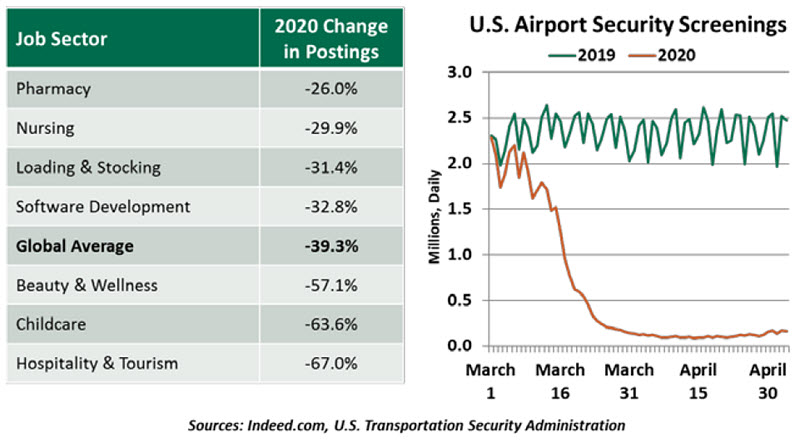 There are bright spots to be found in the data. Though hiring is down across the board, not every job is equally out of demand. Not surprisingly, Indeed’s Hiring Lab reports that jobs in healthcare, including pharmacy and nursing, saw relatively less decline, as did roles in warehousing. These sectors have grown in importance in a locked-down economy.

“New data series tell the story of a downturn.”

Yelp’s activity tracker also shows positives for some businesses. Users have increased their search activity for things like food and grocery delivery services, exercise equipment retailers, hiking destinations and bicycle repair facilities. These businesses certainly tell the story of today’s quarantine. However, they also give us a moment to ponder which behaviors will change after the lockdown. Will a new set of consumers grow accustomed to grocery delivery? Will greater adaption to working from home make us drive less and ride bicycles more?

Lagging reports on gross domestic product and employment will eventually catch up with the downturn. But we’re hoping to find evidence of recovery soon in new data sources.

The Fed’s “kitchen sink” of measures to sustain financial markets has an international scope. To ease the strain on U.S. dollar funding in global financial markets, the Fed has opened and revived dollar swap lines with 14 foreign central banks, and created a new temporary repo facility for other central banks and monetary authorities to borrow dollars.

The Fed’s measures have helped ease strain on dollar funding, at least for some. Central banks in Europe and Japan have been the biggest users of swap lines in order to support banks and businesses that carry large dollar-denominated debts. To a lesser extent, some emerging markets (EMs) have also benefitted. Capital outflows have subsided and bond yields have fallen in countries like South Korea, Brazil and Mexico, whose central banks are part of the arrangements.

The Fed’s swap lines are mostly focused on developed markets; major EMs like India, China, Russia, Turkey and South Africa do not have a dollar swap line. While FIMA was meant to fill this gap, many smaller EMs do not hold a significant stock of U.S. Treasuries to pledge. As a result, the program hasn’t gained much traction, peaking at only $2 million outstanding, on April 29, 2020.

“The Fed’s dollar facilities aren’t aiding those who have the biggest need.”

Politically and structurally, the Fed cannot become the primary financier for emerging markets. For countries on the outside of the Fed’s programs, support from institutions like the International Monetary Fund (IMF) will be essential to addressing fiscal imbalances. To help, the IMF has established a short-term liquidity line, and major world economies have agreed on a debt moratorium for poorer nations until the end of the year.

But these measures may not be enough. The worldwide dollar shortage and the consequent challenge of servicing outstanding dollar debt will have serious consequences for the financial and economic stability of the concerned nations. It could also lead to an economic shock that would echo across the globe. More lifelines, and swap lines, will be needed.