Welcome to the Death Throes of 60:40 Diversification

Back in the good ole’ days of mid-January, asset allocators could look to long-duration US government bonds as a refuge for stormy weather. Those days are no longer. In recent weeks investors have panic bought into this supposed safety asset to a degree never before witnessed. In so doing they have pushed up the price of the risk free asset to a level that renders it nearly useless as a diversification tool it once was.

What do we mean by panic buying into long-duration bonds? Take one look at the charts below and you’ll see what I mean. Dollar turnover in the safe haven asset of choice, the TLT ETF, nearly reached $6.8bn on average over the last five days when the previous all-time high reading was $3bn back in 2011. Not only that, but average call option volume over the last five days also hit an all-time high. That is, people are speculating to a degree never before seen that long-bond yields will continue to fall mightily from here. 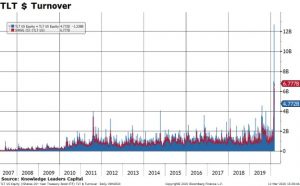 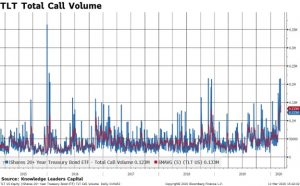 Fair enough, but the math around such a fall is getting more tenuous with each basis point lower in long rates. For example, since 10Y Treasury bonds have a duration of about 8.7 years, if 10 year rates drop another 80bps to 7bps, then those bonds would appreciate by a whopping 7%. If 30 year rates dropped 80bps to 60bps, those bonds would appreciate by 16.8%.

And then what? Given the wonderful results of negative rates in both Europe and Japan, do we expect the Federal Reserve to embrace a policy of a significantly negative Fed Funds rate? That is a tough sell and not something we would be interested in placing a leveraged bet on.

So what we’re left with is the world’s risk free asset offering a real return of -1.1% annually for the next 10 years, assuming a 10Y rate of 87bps and inflation of 2%. What if you buy a 10 year Treasury bond today and the yield backs up to 3% over the next year? Well, that would be a loss of 18.5%.What if you buy the TLT and 30 year rates pop by 50bps in the next 6 weeks, a quite reasonable assumption if the Fed were to restart QE of some form? That would be a loss of 10.6%. Accepting at best a -1.1% real return with the very real possibility of a -10% to -20% return at some point doesn’t sound very risk free to us. Instead, it sounds like a whole lot of risk for a feeble return.

This prospect complicates asset allocation in a way that we have not seen since the end of WWII. What will traditional asset allocators do? What will risk parity funds do who not only buy long bonds for diversification but massively lever the position? Will they continue to panic buy into duration as if it were a precious tulip?

Perhaps. Or they might gravitate on the margin to assets that don’t have a capped upside with unlimited downside. One thing is for sure though, which is that the days of traditional diversification have vanished from our eyes in the span of 15 trading days. It was good while it lasted.