A Recovery, But of the Square Root Variety

Regular readers of this blog and of our other commentary know that we have been been looking for some kind of cyclical rebound in economic activity starting in the first quarter of 2020. By many indications, we are getting just that, and right on time. One of the most useful indicators we use to judge cyclical turning points in economic activity is the ISM Manufacturing PMI. We like it because the manufacturing sector is among the most cyclical areas of the economy, and thus the manufacturing PMI is highly sensitive to changes in overall activity.

From the end last year through January, the ISM Manufacturing PMI has moved from a reading of below 50 (contraction) to above 50 again (expansion). This is definitely good news. What’s more, the delayed effect of the lower cost of money we’ve experienced since the end of 2018 (i.e. the lowering of long-term interest rates), suggests this cyclical recovery has more than a year left to run. The chart below demonstrates this observation. In it, I plot the changes in the 10-year Treasury yield advanced by 18 months (red line on the right, inverted scale) on top of the ISM Manufacturing PMI (blue line on the left scale). In this chart we can clearly see that manufacturing activity began to turn higher literally on the month suggested by changes in long-term bond yields. 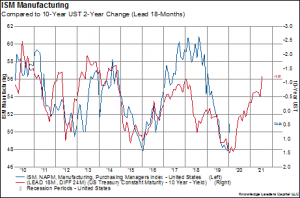 But it’s not just the household sector that has less room to improve from here, it’s also the corporate sector. Currently, the extra margin investment grade corporate bond issuers must pay over and above the treasury yield is at a low level of 2.05%. In 2012 these corporate credit spreads were 3.5% and in 2016 they were 3.66%. In both of those cases, credit spreads – a proxy for corporate funding costs – could come down by quite a lot before entering the historically low realm. Not so today. Of course, credit spreads could theoretically move lower than they are now, but they are currently sitting at the second lowest level since 2007. Even if they did move lower, it wouldn’t likely be by that much. Back in early 2018 investment grade credit spreads got down to 1.6%, so even a best case scenario provides only 0.45% of credit spread improvement from current levels. For what it’s worth, credit spreads narrowed by 1.5% from 2011-2014 and by 2% from 2016-2018.

Meanwhile, Chinese economic growth is likely to play less of a role in this recovery than in previous ones. The overall Chinese growth rate is of course much lower than it was at the start of the previous two cyclical economic recoveries (6% now vs 7.7% in 2012 and 6.9% in 2016). Furthermore, the penchant for large scale fiscal stimulus and infrastructure projects is much, much less than it was just a few years ago.

Not to douse this cyclical recovery with even more cold water, but we also must consider ancillary factors that are likely to have an impact in our current situation. First, unlike the 2016-2018 period, the US economy is not going to get a large dose of fiscal stimulus. If anything, headwinds from trade policy remain even though the worst case outcome of tariffs on all Chinese goods was averted. Finally, the current spread and loss of economic activity from the coronavirus is a unique feature that this recovery will have to surmount that previous recovers did not.

To be fair, the situation as a whole is not that dire. Yes, a cyclical economic recovery is under way and it may drive another earnings cycle for businesses. But, I think it’s important for the reasons highlighted and others to not expect the same kind of robustness as the previous two recoveries. In other words, this recovery might take on more of a square-root shape than a V shape.