Membership in the European Union (EU) has been a topic of debate in the United Kingdom ever since the country joined the European Economic Community in 1973. Just two years after joining, the U.K. held its first referendum on the issue of continuing membership in the Common Market. Thirty-one years later, the nation held its second referendum on the same issue, and opted to depart.

It’s been more than three years since that vote, during which Brexit has been a subject of considerable uncertainty. But yesterday’s elections offer some additional clarity to Britain, its trading partners, and the financial markets.

The last U.K. elections in 2017 saw former Prime Minister (PM) Theresa May lose her gamble for a larger majority that would bolster her position in Brexit negotiations. The Tories were left with fewer seats, and the seeds were sown for May’s eventual downfall. Two-and-a-half years later, her successor (current PM Boris Johnson) won his gamble for additional leverage, securing a resounding majority in this week’s election.

The outcome should clear the way for the U.K. to leave the EU on January 31. The Brexit deal that Johnson worked out with his European counterparts in October details the terms of the separation: the U.K. will leave the EU customs union, de-align from European regulations by the end of 2020 and seek a limited free trade agreement with the EU. EU citizens working in Britain will be allowed to stay, and a £39 billion divorce bill has been agreed. The resolution could help arrest the persistent economic decline that Britain has suffered since the end of 2016. 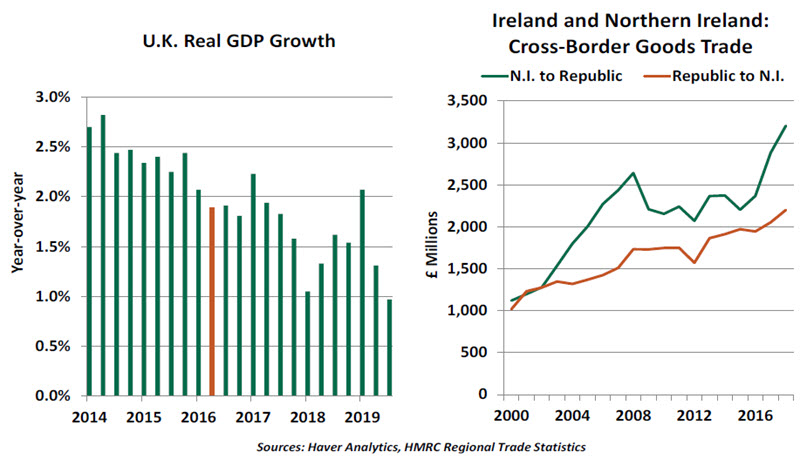 With renewed leverage in Parliament, reports suggest that Johnson is aiming for a parliamentary vote before Christmas. That would allow plenty of time for the Europeans to secure the needed assent from their members. If all goes smoothly, Britain will begin a transition period in February that will involve a great deal of work.

“The election resolves some Brexit uncertainty, but leaves many unknowns.”

The U.K. will have to negotiate a trade agreement with the EU to ensure continued tariff-free access to the market after the transition period. So as not to invite other members to contemplate departure, European leaders are unlikely to make this an easy process. Outside of Europe, the U.K. will have to conclude a huge number of new trade agreements, since Britain will no longer be covered by the EU-agreed treaties. So far, Britain has signed 20 "continuity" deals covering 50 countries or territories. But those trade agreements represent only over 8% of total U.K. trade. 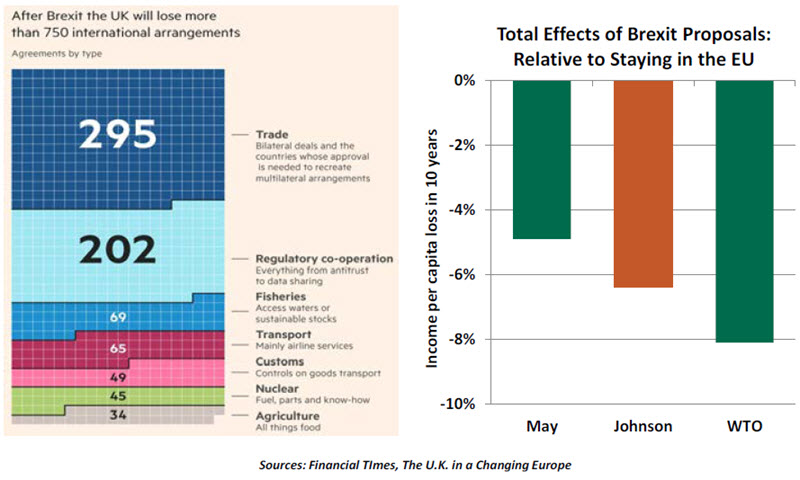 Johnson has stressed his intent to leave the EU without seeking to extend the transition period (currently set to close at the end of 2020). His stridence may have been designed to play well with the hard-core Brexit supporters who have been central to his leadership so far. But the results of the election give Johnson a much broader base of support, including some traditional Labour strongholds. This may lead him to be more flexible in both the timing of Brexit work and the closeness of the new relationship the U.K. will share with the EU.

Though not our base case, if both the U.K. and EU fail to reach a trade agreement, the end of the transition period would see the terms default to those of the World Trade Organization. This would effectively translate to a “no-deal” Brexit in terms of trade. Almost all British exports would be subject to the same tariffs and policies as the EU applies to goods from the U.S. or China. The absence of a “backstop” after the transition period is a key difference between Johnson’s plan and the one championed by Theresa May.

Brexit uncertainty has caused economic pain. Manufacturing has been on a downward trend, business investment has fallen, and jobs have been moving out of the country. Investors are pulling out money from real estate funds based in the U.K. Clarity over the road ahead will help limit damage going forward, but most economists find that Brexit will result in a permanent loss of economic output.

Apart from Brexit, looser fiscal policy was another focus during the election campaign. Both of the leading parties proposed a turn against austerity. Under the Tory manifesto, additional fiscal stimulus of £7.3 billion (essentially through tax cuts) would likely have a modest effect on the U.K. economy. In fact, the party has proposed to reverse the government’s plan to cut the corporation tax from 19% to 17% from April 2020. This probably reflects, in part, limitations imposed by the Party’s new fiscal rule.

“Brexit does not end with the withdrawal agreement.”

The Brexit resolution will have implications for monetary policy, as well. Current Bank of England (BoE) Governor Mark Carney’s term closes at the end of January; the new BoE governor (who will be appointed by Johnson’s new government) may have to with deal with pressure from Downing Street to support the economy. As a former member of the monetary policy committee at the BoE said: a person who takes up Mark Carney’s role would have to be “deeply committed to the U.K’s well-being” or “have an unbelievable desire for a challenge”.

While Labour and other opposition parties highlighted other issues, this election will likely be remembered as the one that will “get Brexit done”. Even if the British parliament finally votes to leave the EU, much still needs to be resolved, and Brexit will remain a topic of debate. As we have noted before, this is not the beginning of the end, but rather the end of the beginning.

Will the Boulder Stay Uphill?

In the 1993 movie “Groundhog Day,” a television news reporter finds himself trapped in a day that keeps repeating. Every morning, he wakes up in the same room of the same small town, hearing the same dated Sonny and Cher pop song and banter from the alarm clock. The protagonist and the audience are left wondering why he is doomed to relive February 2 over and over again.

The “I Got You Babe” of economic news this year has been repeated rumors of progress on a U.S.-China trade deal. Over the past two months, we again heard reports of talks and halting progress. But late this week, the U.S. announced a limited trade deal with China. As of the time of writing, details are still emerging and no paper has been signed, but it appears the long-rumored “phase one” deal is taking shape.

Negotiations accelerated this week ahead of a key deadline: As of this Sunday, December 15, the U.S. was scheduled to implement 15% tariffs on nearly all Chinese imports that are not yet subject to tariffs. This last tranche included high-dollar-value consumer goods, including mobile phones and computers. Neither side would have gained from escalation. U.S. consumers would see price increases, while China would see lower demand for its products.

Digesting the details of this preliminary agreement, we must bear in mind that disappointments have precedents, too. Talks at the start of the year proved fruitless, and the tariff increase scheduled for January 1 occurred on May 10. Subsequent talks yielded nothing but more tariffs, roughly half of which took effect September 1, with the remainder left hanging as the December 15 threat. If China does not honor its commitments, the U.S. will not hesitate to raise tariffs again.

The new China agreement has a new feature: de-escalation. Until this point, the only concessions by the U.S. have been postponements of threatened tariffs. This deal’s reduction in the tariff rate is new ground for the Trump administration. But we offer Argentina and Brazil as a cautionary tale: They had enjoyed a waiver from the U.S.’ steel and aluminum tariffs, but due to circumstances beyond their control, saw the reprieve withdrawn suddenly. Even if the tariffs against China are lightened or removed, they can be put back in place.

China sought a complete rollback of the current tariffs, but the U.S. enjoyed the leverage that tariffs convey, and compromised with a partial reduction to a subset of tariff rates. The U.S. wanted formal quotas for agricultural purchases, and China reportedly overcame its reluctance and made a modest commitment. But it appears those were the extent of the compromises. The push to complete a preliminary deal has sidelined the core issues that initially sparked the confrontation, including China’s industrial subsidies and import barriers.

“Phase one is the first of many rounds of U.S./China trade talks.” 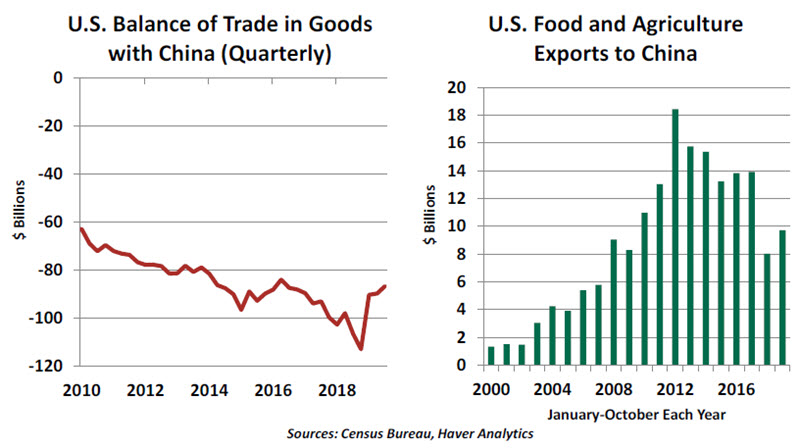 With an election in sight, no president would welcome a recession. The risk of tariffs slowing the economy likely motivated the Trump administration to move away from escalation. But thus far, markets have not punished the U.S.’ strong approach to negotiations. The economy is broadly performing well, and equity markets have had a favorable year. Any pain in the U.S. has been limited to specific sectors that have witnessed cost increases or lost sales, notably farming.

Much uncertainty remains, and much work lies ahead. Nearly two years of talks have yielded an incomplete agreement. China’s protections and an array of U.S. tariffs remain in place. Future rounds will require negotiators to move on to more difficult matters.

In “Groundhog Day,” after innumerable days of malaise, the lead character breaks out of his time loop by changing his attitude. He embraces his adopted community, approaches his job vigorously and builds a new relationship with his colleagues. He selflessly seeks the best outcomes for everyone around him. We hope negotiators for the U.S. and China can build on this week’s momentum to find their way to a better place.

Carl reflects on the life and times of Paul Volcker.

I last saw Paul Volcker at a conference two years ago, and he was still a presence. Then 90, his posture wasn’t perfect; but he still towered over the rest of us. The impactful decades he spent in the arena of financial policy lent an immense gravitas to his reflections. At an age when most have retired, he was anything but retiring.

Paul Volcker died this week at the age of 92. His passing prompted voluminous reflections on his life and times; one of the best of them can be found here. He was a key figure in the Treasury Department when the United States dropped the gold standard in 1971, and served as chairman of the Federal Reserve System from 1979 to 1987.

“Volcker was a larger-than-life figure.”

When he assumed leadership at the Fed, inflation was raging and seemed to defy all attempts to control it. Volcker, inspired by the Chicago school of economics (“Inflation is everywhere and always a monetary phenomenon”), placed strict controls on the money supply. The strategy produced high interest rates and economic pain in the short run, but much more manageable inflation in the long run.

Money supply targeting actually proved short-lived. Financial innovation made it more difficult to measure money and link it to economic activity. But Volcker and the Fed made a seamless transition to the interest rate targeting regime that persists to this day. Volcker’s tenure also illustrated the value of central bank independence, a concept unfortunately questioned today. In his later years, Volcker remained an important voice in the arena of financial policy. In all, his public service spanned almost 60 years.

The economic prosperity and sensational market performance seen in the past four decades would not have been possible without Volcker’s vision and determination. He was willing to suffer the slings and arrows of critics; during the economic depths of the early 1980s, he received unneeded lumber from idled and angry home builders. But the housing industry, along with the rest of us, owes Paul Volcker an immense debt. Physically and reputationally, he was a towering figure.