Sunshine is said to be the best deodorant for shady backroom dealings, and live coverage of legislative proceedings is typically a good thing. But the telecast of events in the British Parliament this week did little to disperse the malodor coming from Westminster.

The Brexit referendum happened more than three years ago, but there are still deep divisions within the U.K. about the type of relationship the country should share with the European Union. The failure to reconcile competing visions tortured former Prime Minister Theresa May, who stepped down earlier this summer.

Her successor, Boris Johnson, has made a bad situation worse. In an effort to strengthen his hand, he prevailed on the Queen to suspend Parliament for a month, hoping to force brinksmanship with the Europeans. Johnson’s public hope was to strengthen his negotiating stance, but many suspect his true goal was an abrupt departure on October 31 (the current Brexit deadline). 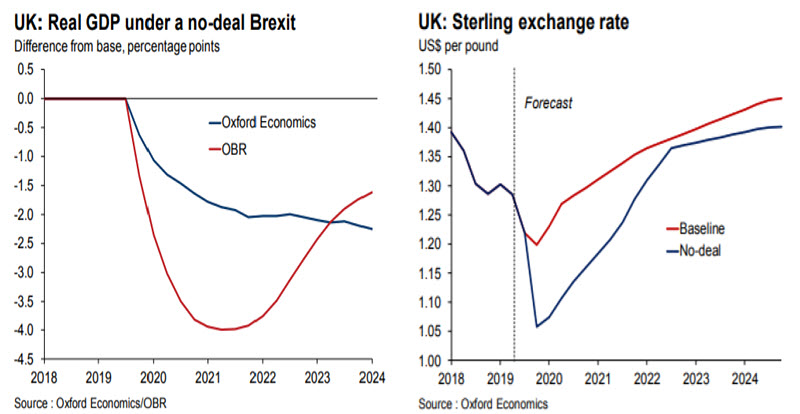 While the specter of Brexit has already taken a terrible toll on the U.K. economy, a “no deal” scenario would be catastrophic. Over the Prime Minister’s objections, Parliament took steps this week to avoid this outcome. Stung by the loss, Johnson expelled 21 members of his Conservative Party from Parliament and proposed new elections. At very least, elections would introduce additional chaos and delay. Should an election shift the balance of power, future outcomes would be even less certain.

The added uncertainty, and the manner in which Johnson is conducting his business, are not playing well in the court of the financial markets. The British pound touched another multi-year low this week. Confidence in the U.K. as a business destination has taken another body blow.

Brexit remains an ominous case study of what happens when a country tries to disengage itself from international associations. There will undoubtedly be more plot twists to come in the weeks ahead, and we’ll cover them closely. But it might be better if upcoming deliberations retreated to the shadows from the light.

More Work to Do

The American labor market has produced stunning results in the course of this recovery, generating lots of new jobs, luring workers into the labor force and yielding higher wages. The labor market has been supported by several upside surprises in the supply of labor. But it is not clear how long this run of success can be sustained.

For over a year, the unemployment rate has held at or below 4%, a level most economists think would represent full employment. Any minor increases in the unemployment rate during this interval have been attributed to increases in the size of the workforce: more people have chosen to look for work. A view of the labor force participation rate for workers aged 25-54 bears this out: it fell to a low of 80.6% in September 2015, but has risen fairly steadily thereafter.

Much of the gain has been attributable to workers who might have otherwise chosen not to work. More Americans continue to work beyond what was once considered retirement age. Some are working out of necessity, finding themselves with insufficient savings to afford retirement. Others are working by choice, as our service economy allows more people to keep working as long as they maintain their mental faculties. Either way, longer life expectancy and better health outcomes have benefitted the labor force. 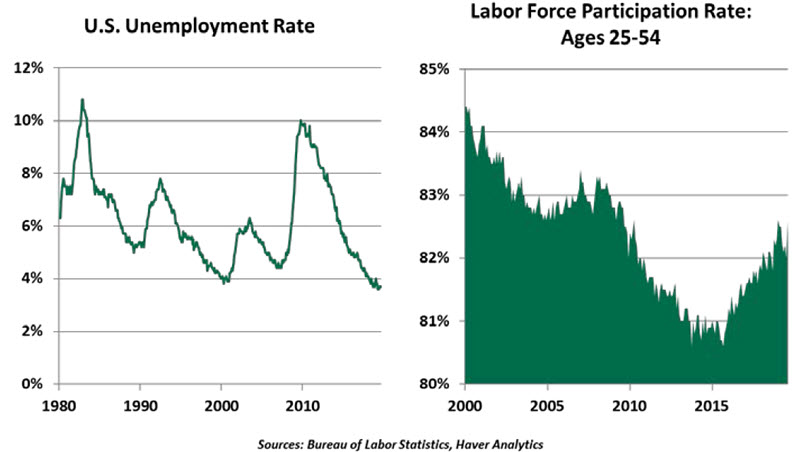 Workers are also moving off disability rolls. When a worker is physically unable to work due to illness or injury, a small disability payment is available from Social Security. The number of Social Security disability recipients has fallen from a peak of 8.1 million in 2014 to 7.7 million today. We do not mean to imply that disability is a choice: Its qualification standards are stringent, and its payments are meager. However, the tighter the labor market becomes, the more likely a partially disabled worker can find a role to accommodate his or her needs.

These additions to the workforce have also had an important influence on wage growth. The Phillips Curve relationship sets an expectation that as unemployment falls, inflation should increase (as producers seek to pass along the cost of higher wages). In this cycle, the Phillips Curve has come under criticism, but wages have increased by over 3% year-over-year. This falls short of the standard set in past expansions, but this may be caused by labor market capacity that the “official” unemployment rate fails to capture.

Strong employment results can be a leading indicator for the economy. When people work, they make money and spend it. Consumer spending is the brightest spot in the U.S. economic picture at the moment. Consumer confidence measures have hovered at elevated levels. Perhaps the greatest show of confidence has been the elevated rate of employees quitting their jobs, a sign that a better job has been offered, or that employees are confident they can find one.

“There is more to the U.S. labor market than the unemployment rate would suggest.”

Since the summer of 2018, the number of open positions has exceeded the number of candidates seeking work. In aggregate, anyone who wants a job can find one. The jobs might not suit the worker’s experience and may require relocation, but they are available. Indeed, if the current trade actions meet their implicit objective of bringing jobs back from overseas to the U.S., it is unclear who would be waiting to fill them. The experience of a generation of factory closures was painful, but most workers have moved on and re-trained.

The central challenge facing employers is not the raw number of candidates, but the skills they bring. Surveys of business managers and owners, such as the one conducted monthly by the National Federation of Independent Business, show that finding appropriately skilled workers is the greatest challenge for business growth. Many businesses have filled the skills gap by expanding their on-the-job training programs. This willingness to hire and develop less-skilled workers has been another way workers have been brought back into the labor force.

Going forward, government initiatives may help draw some workers back. Expansion of access to higher education will help improve workers’ skills. It need not be a broad “free college” program; just a year or two of trade education can launch or enhance a career. Meanwhile, proposals to start schooling in pre-kindergarten (from age four) would give parents of young children more flexibility to work. Criminal justice reform that removes obstacles for non-violent offenders seeking work would open more opportunities for those seeking a second chance.

“It’s been a great run for the U.S. job market, but it could be hard to sustain.”

But even amid all of this great news, it is unclear how much longer the performance of the U.S. labor force can continue. On the supply side, birth rates are gradually falling while barriers to immigration are rising. Most retirees and disability recipients cannot return to work. Frictions are still present: the participation rate for prime-aged workers fell over the course of 2019 to 82.0% before rebounding to 82.6% in August. Percentage point differences may look small, but every tenth of a percent increase for workers aged 25-54 means over 100,000 more people working.

The supply of labor has yet to be a constraint; an end to growth is more likely to come from slower demand for workers. Questions over the outlook may lead employers to be more conservative in their hiring practices. If job creation slows, the strength of the American consumer may be diminished. And that could spell trouble for the global economy.

A sanction, in the simplest terms, is a fine levied on another country, organization or foreign individual for violating a law or rule. There was a time when battle was the next best option (after diplomacy) for persuading target states (or non-state actors) to alter their behavior. But in modern geopolitics, economic sanctions are increasingly becoming the weapon of choice.

Economic sanctions can target states, individuals or businesses. They can take the form of travel bans, asset freezes, trade embargoes, tariffs and curtailed access to financial systems. These tools are being applied frequently; the United Nations currently has 14 active sanctions regimes, one less than its 2015 peak, while the U.S. alone has 30 sanction regimes.

The European Union (EU) also regularly imposes its own sanctions, but the United States leads the world, employing them over 100 times in the last century. One of the most influential powers of America is its ability to freeze entities out of the payments system; over the past two decades, the U.S. has imposed financial sanctions against a large number of entities and states. In its first year alone, the Trump administration imposed or extended sanctions (including financial and trade) on countries including North Korea, Iran, Russia and Cuba.

The effectiveness of sanctions depends on the significance of the target, each party’s influence in the global arena, and the breadth of cooperation from other countries in enforcing the restriction. If a sanction is made unilaterally, the target entity can use a third party to evade sanctions. Most recently, we have seen businesses operating in China moving production to Vietnam to escape U.S. tariffs. Iran is attempting to work around U.S. financial sanctions by finding common ground with the EU.

Sanctions can be economically and politically damaging, hurting innocent citizens and legitimate businesses. Blocking exports, particularly from a trade- or commodity-dependent economy, leads to substantial economic stress. Trade sanctions not only increase costs to consumers and businesses in the sanctioning countries, but also disrupt global supply chains.

Iraq, Iran and Venezuela are prime examples of how sanctions can be crippling. The sanctions against Iraq are the most comprehensive and have contributed to serious economic costs. Iraq has struggled to rebuild its transportation, power, communication and agricultural infrastructures decimated during the Gulf War. Venezuela is going through one of the worst economic crises of the last century, exacerbated by sanctions. And the hit to Iran’s economy has been substantial.

Iran’s oil output has declined notably, the value of the rial has plummeted and living costs are spiraling, putting the economy on a clear course toward deep recession.

Sanctions are not a perfect weapon, often failing to attain their foreign policy objectives or leading to unexpected fallout. The Organization of Arab Petroleum Exporting Countries’ (OAPEC) 1973 embargo on oil shipments to the U.S. resulted in a regional arms race funded by rising oil prices. More recently, sanctions against Russia due to its Ukrainian intervention have had only a modest direct impact on Russia’s insular economy, shaving off an average of 0.2% per year, according to the International Monetary Fund.

“Sanctions are used a lot, but they aren’t always effective.”

During the Obama regime, coordinated global measures against Iran had damaged its economy, pushing Iran to negotiate the now-scuttled nuclear agreement. But today’s Irani leaders have remained defiant, partly because of their ability to work around some of the restrictions.

Given the recent increase in geopolitical complications, we can expect sanctions to sustain popularity. Yet the proliferation of these measures creates friction for global commerce and reduces standards of living in both the sanctioning country and the target. For that reason, sanctions should be applied only as a last resort.