Fresh from a family vacation in Germany, Ryan shares an outlook on the country.

Foreign drivers in Germany are often excited about the unchecked speed limits on the Autobahn. But in my rental car, I was most surprised by the well-controlled traffic within cities. Unlike in the U.S., where traffic lights are positioned high in the air in the middle of intersections, urban traffic lights in German cities are mounted only on the near sides. By requiring drivers to stop short to see the signals, this arrangement prevents them from blocking crosswalks or creeping out ahead of green lights. It is an elegant way to force defensive driving.

As an economy, however, Germany may be behaving too cautiously. It ended 2018 on the brink of a recession, with an economic contraction in third quarter 2018 followed by flat growth in the fourth quarter. Its growth over the past two quarters lagged that of the overall eurozone, a concerning trend for the country that accounts for the largest share of the region’s economic output. 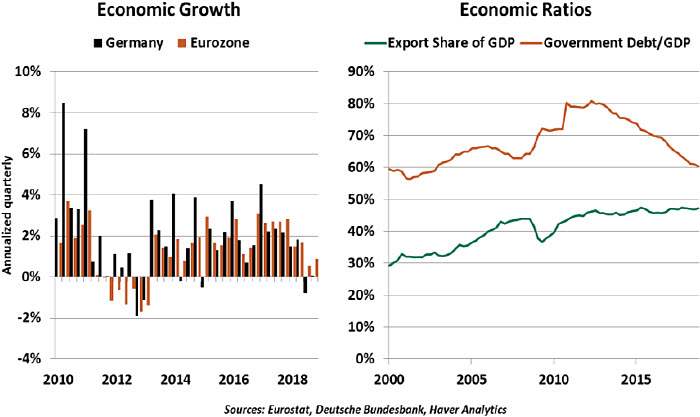 But as trade battles have taken a toll on China, Germany’s fortunes have flagged. This is a worry for the rest of the eurozone; Germany has been providing substantial amounts of credit to Italy and Spain through the European banking system, helping them through difficult times. If this support were curtailed, Europe’s economic equation becomes much harder to solve.

Some of the slowdown evident in the second half of 2018 was due to transient factors. A dry summer led to low water levels in the Rhine River, a primary route German factories use to receive raw materials and ship finished goods. As shipments slowed or were rerouted, output fell. The important automotive sector, meanwhile, slowed while adapting to comply with new emission requirements that took effect in September.

The consumer sector is not helping economic activity, either. German consumers should be optimistic: The harmonized unemployment rate is at a record low 3.2%. Growth in earnings has consistently exceeded inflation for the past seven years. Yet despite rising incomes, consumer spending has been slow amid economic uncertainty. German citizens are choosing to increase their saving rather than spending.

The culture of thrift starts at the top. The government has prioritized frugality over investment. Germany takes its obligations under the Maastricht Treaty seriously, targeting a government deficit-to-gross domestic product (GDP) ratio of less than 3% and a gross government debt-to-GDP ratio of no more than 60%. As of 2018, Germany is slightly out of compliance at 60.9%, but most of the EU’s largest economies are well beyond that threshold.

This conservatism is one source of unease for voters. The current German coalition government took five months to form after 2017 elections, a long delay by German standards. Last year, Chancellor Angela Merkel stepped down as chair of her party, a prelude to her retirement at the end of her term in 2021. Support for Merkel’s centrist approach is ebbing, and populist forces that would welcome greater government spending are rising. 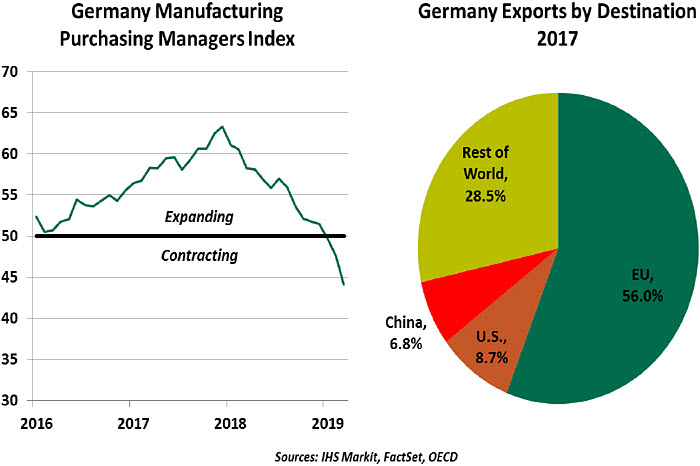 The German government has room to implement more supportive fiscal policies. Tax cuts would be welcome to most Germans, whose income above €55,961 is taxed at a marginal rate of 42% (plus solidarity and church taxes), a high tax rate by U.S. standards. Public investment is always an option; the slowdown due to water levels illustrated a rare fault in German infrastructure.

Germany will soon face an opportunity to either shed or spread its fiscal inclinations. In November, leadership of the European Central Bank (ECB) will transition, and a leading candidate is Bundesbank President Jens Weidmann. The ECB’s accommodative policies over the past decade have contrasted with the local conditions surrounding their headquarters in Frankfurt. A German leader may bring a more hawkish tone, though he would recognize the risk of a sudden end to stimulative policies.

The fundamental challenge for the German economy is its reliance on external demand, with exports consistently comprising nearly half of its economic output. While this is a source of pride for Germany and envy for countries seeking greater export activities, Germany has neglected to create a domestic growth engine. Its substantial current account surplus and glut of personal savings reflect a culture that eschews risk and embraces frugality. Its people illustrate the paradox of thrift: Though it is virtuous to save money and live within one’s means, if everyone saves, the broad economy will struggle.

We doubt any forecasts of imminent recession and believe the German economy will enjoy a year of growth ahead. Business spending is finally finding some tailwinds: Trade tensions have peaked, the weak euro makes German wares more affordable, and purchasing managers’ index readings around the world suggest the global slowdown has reached its trough. The labor market remains tight, which positions consumers for wage gains and could lead to greater domestic demand. And if the situation should worsen, the upside of cautious fiscal policy would be “dry powder” for future stimulus to support the economy.

Another difference in German stoplights is their brief flash of yellow to alert drivers of the imminent change from red to green. After a cautious start, drivers can find their way to roads with no speed limits. We hope the most recent data is the yellow light that heralds acceleration. Germany’s economic potential may have its limits, but it is ready for a faster ride ahead.

The U.S. economy has recovered well from the aftershocks of the 2008 financial crisis, as reflected in tight labor markets and high levels of business confidence. But unlike other measures of the U.S. economy, the pace of new business creation has failed to match pre-crisis levels. Business startups are now less common than they were decades ago. The share of U.S. businesses less than two years old has fallen from 14% in 1979 to 8% in 2014 (the most recent year available).

Startups are an important engine for the U.S. economy. They not only are key drivers of job creation, but also play a vital role in boosting productivity in the economy through innovation, an essential element to long-term growth and competitiveness.

One reason for the drop in entrepreneurship may be the rising power of bigger and more established corporations, which has made it harder for new businesses to compete. The success rate of startups is quite low, and firms that manage to do well often get acquired by their larger competitors.

Overall, raising capital isn’t much of a problem for American startups. Venture capital funding for U.S. companies, according to the PWC and CB Insights’ Q4 2018 MoneyTree report, has increased from around $36 billion in 2013 to $100 billion in 2018, the highest since 2000. But the data shows that investors are increasingly drawn to larger deals, so some of the smaller opportunities are getting frozen out.

Access to talent is another limitation for U.S. startups, as the highest educated workers (those with advanced degrees) are less attracted to the idea of entrepreneurship. Only 2.2% of 25-to-54-year-olds with a master’s degree or Ph.D. owned a small company (up to 10 employees) in 2017, down from 4% in 1992. High salaries for educated workforces at big corporations have made entrepreneurship less compelling. The U.S. is still the top destination for international students, but enrollment at American universities has been declining for the last two years owing to increasingly restrictive immigration policies.

Though successive administrations have made efforts to make the regulatory framework easier for startups, the cost of complying with rules issued by a wide range of agencies (CFPB, EPA, FDA, FCC, FTC, OSHA etc.) is also holding back startups. 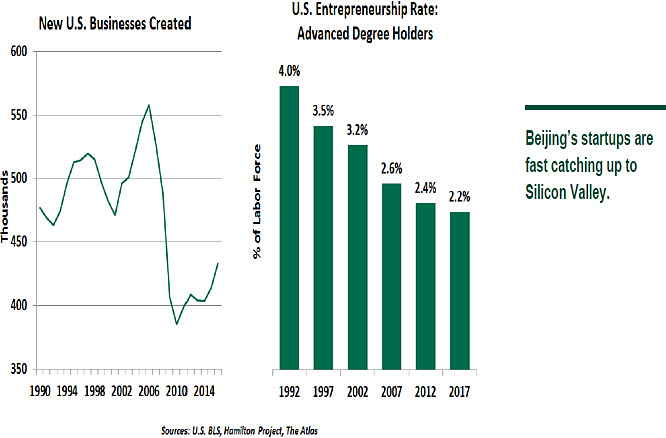 Despite these unfavorable developments, the U.S. remains home to the world’s largest startup ecosystem. However, it is facing firm competition from China, particularly in the cutting-edge fields of artificial intelligence (AI), robotics and software. China’s share of the world’s unicorns (startups that achieve a valuation of $1 billion) has increased from 14% in 2014 to 35% as of early 2018. Over the same time period, America’s share has fallen from 61% to 41%. In the field of AI, China is home to around 109 unicorns, compared to 156 in the U.S.

U.S. federal and state governments provide a series of incentive programs for new firms. Credit is available through the Small Business Innovation Research program and “Startup America” helps to encourage participation in entrepreneurship. Considering the challenging internal and external backdrop, more can be done. One way would be to reduce subsidies or tax breaks to existing businesses like Amazon. With an ageing population and talent crunch, easing norms for hiring foreign workers will also provide them access to a greater talent pool.

We hope elected leaders will turn attention to the decline in entrepreneurship and pursue policies to correct them. If you don’t start small, you can’t do big things.

Caller ID has reached new heights. My mobile phone now lights up with “Scam Likely” when an unknown number tries to reach me. I typically let those go without answering.

It is therefore no wonder that collecting information for the consumer price index (CPI) has been getting more difficult. Amazingly, in this day and age, a lot of the raw data used to assemble the CPI is still collected through telephone surveys and diaries that consumers maintain. Response rates have been declining, thinning (and potentially skewing) the sample size.

To compensate, government agencies have been embracing technology. Databases of consumer purchasing habits have been broadening and deepening: e-commerce accounts for an ever-increasing fraction of sales, and electronic forms of payment dominate over cash. The information accumulated by these channels is ripe for harvesting by statisticians; quantitative methods have the potential to increase accuracy, improve timeliness and save money.

In a recent example, the U.S. Bureau of Labor Statistics (the agency that compiles the CPI) stopped measuring the prices of apparel with surveys and started using electronic data from stores. The switch caused the index of clothing prices to fall more than 2% in March, the largest monthly decrease in 70 years. The calculation change had an outsized impact on overall inflation.

More broadly, economists suspect that traditional surveys have been overstating inflation, relative to the more objective readings that are derived from advanced statistical sampling. If inflation is overstated, then real growth and productivity growth are understated. New ways of gauging prices could alter our perception of recent economic performance.

In his Wednesday press conference, U.S. Federal Reserve Chair Jerome Powell characterized these measurement updates as transitory factors that fade over time. But if big data continues to penetrate the assessment of inflation, transitory events could add up to something more lasting. In that event, the Fed (and other central banks) will be challenged to update their expectations…and, potentially, their policies.