Illinois is a median among U.S. states. Geographically, it sits in the middle of the country. Of the 50 states in the union, it was chronologically the 21st to enter. By land area, it is the 25th largest state, connecting the Great Lakes on its east to the Mississippi River on its west. Its population and economy have much in common with the rest of the country.

Like many states, Illinois must strike a balance between its urban core, Chicago, which contains the majority of its population; and the rural expanse that represents the majority of its space and natural resources. Its capital, Springfield, sits in the middle of the state, a three-hour drive from Chicago, assuming no traffic. The concerns of urban residents, like gang violence and public transit, are unfamiliar to those in the rest of the state. These differences in location and lifestyle are much like the gaps between New York City and Albany; Los Angeles and Sacramento; Miami and Tallahassee.

Illinois is also emblematic of the dire fiscal state of U.S. states. While Illinois faces a uniquely difficult challenge, it offers lessons to others seeking to avoid bad outcomes. 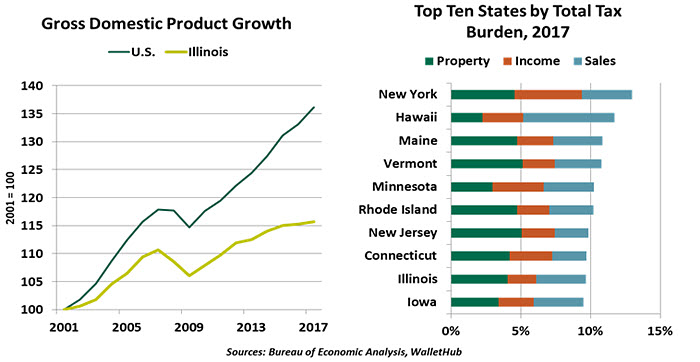 As we discussed last year, decades of neglect in funding pensions for state workers drove Illinois’ finances to the brink of a junk credit rating, while a political standoff nearly brought the state to insolvency. Illinois has also borne the downside risks of trade conflicts. Illinois’ farmers have made it the leading producer of soybeans among U.S. states, while its already-struggling manufacturers had to absorb higher steel and aluminum prices.

Since our last writing, a new governor has taken office. The expensive campaign between two self-funded businessmen has been a recurring theme in many gubernatorial races. Also common across the country has been the “outsiders” promising to lead with a business perspective instead of the entrenched views of career politicians.

The new governor, J. B. Pritzker, recognizes the need for drastic fiscal action. Illinois’s constitution uniquely forbids a graduated income tax and contains strict protection for public workers’ pensions. The state’s current flat income tax and sales tax put a regressively higher tax burden on lower earners. Amending the constitution is on Pritzker’s agenda, but an amendment cannot be brought for a vote until November 2020 and will not be in place until 2021 at earliest.

Even if the constitutional restriction is lifted, the future tax outlook is uncertain. Pritzker has proposed a graduated income tax plan, notable for its millionaire’s tax: Taxpayers earning over $1,000,000 would lose their marginal tax increases and instead see all income taxed at the highest rate. The proposal is imperfect and not binding, but it gives a clear signal of where taxes are going.

The risks and costs of tax increases have grown in light of the 2017 Tax Cuts and Jobs Act (TCJA). One of TCJA’s most substantial changes was its limitation of $10,000 state and local tax (SALT) deductions against federal income tax. Before this cap, residents of higher-tax states could find some consolation in reducing their federal tax burden with their substantial state income and property taxes. With the SALT cap, every local tax increase carries a higher real cost to taxpayers.

Competition among states cannot be ignored. While economic development incentives can be a race to the bottom, the higher a state’s tax rates rise, the more tempting it is for businesses and residents to relocate. Illinois has been losing population for five years running. 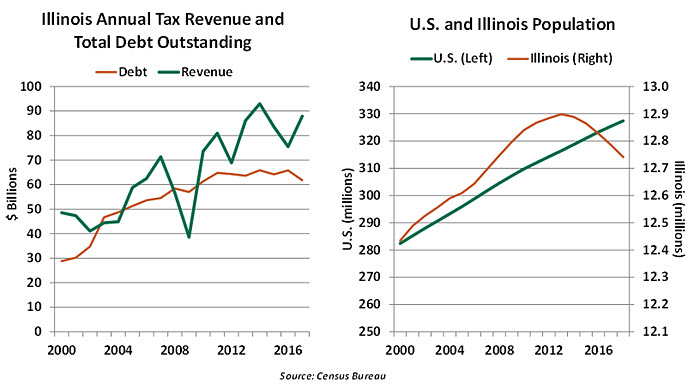 Pritzker has made more immediate proposals to raise additional state revenue without income tax changes. If all proposals are implemented, they could raise over $1.1 billion in additional annual revenue for the state, a good start but not sufficient to close its structural deficit of $3.2 billion.

With so many categories of taxes and fees, comparing tax burdens between states is nuanced. No state has zero taxes, and those with low or no taxes in one category (like Texas’ lack of an income tax) make up for it with others (like the Lone Star state’s high property taxes). Today, Illinois’ combined tax burden leaves it some headroom to increase taxes, but not by much.

The pension funding gap started with a decision in the mid-1990s to defer a small portion of pension payments. Unfortunately for today’s Illinois taxpayers, the deferral was an effective tool to balance the budget. Subsequent governors routinely underfunded the pension or paid by issuing bonds. The state took 25 years to reach its current straits, and it will take a similar duration of fiscal restraint to recover from it. Even Pritzker’s own budget proposal, full of tax and fee increases, envisions the pension program reaching a funded ratio of only 65% by the year 2045.

A slow slog is the only realistic approach. Bankruptcy is not an option, as the federal bankruptcy code does not allow states to undergo reorganization. Any attempt to seek a bailout from the federal government would face strident objections from the other 49 states that exercised fiscal discipline, setting up a prolonged fight with an uncertain outcome.

Illinois’ pain is not for naught if other states learn from this episode. Most states offer generous pension plans, and fixed income investors are happy to purchase state bonds. The temptation to underfund a pension will always be present, but it is folly. As recently as 2010, Illinois was just one of several high-risk states, with analysts equally worried about the fiscal conditions of California, New Jersey and Ohio. These other risky states took their medicine to correct their fiscal gaps: New Jersey raised its property taxes to the highest rates in the nation; California boosted its income and sales taxes. Ohio has provided an encouraging example of a recovery without a tax increase, as disciplined spending amid an economic recovery helped to balance its budget.

Illinois has a long history of change. The natives in Cahokia, and Latter Day Saints in Nauvoo, moved on from their settlements; Chicago rebuilt from a devastating fire. Today, the most successful regions in the U.S. are those that have planned well and adapted quickly to meet today’s economic needs. The sooner and more decisively Illinois leaders act to correct the state’s shortcomings, the better the future will be for those of us who live here.

Last October, Japanese Prime Minister Shinzō Abe arrived in Beijing for the first bilateral trip by a Japanese leader to China in seven years. The visit was nominally intended to commemorate the 40th anniversary of the Treaty of Peace and Friendship. More broadly, however, the diplomatic détente, initiated in 2017 after years of enduring rivalry, can be attributed to the countries’ common interest in standing up to U.S. trade restrictions.

Despite some unfortunate history and important strategic differences, trade between the two Asian rivals has flourished. For Japanese companies, China is not only the world’s factory but is also a key consumer of their products. China has emerged as the top destination for Japanese products: its share of total Japanese exports has increased significantly from just 5% in 1998 to 20% in 2018. Over the same time period, the U.S. share of exports from Japan has declined from 31% to 19%.

Though Japan has managed to diversify its export markets, it relies heavily on the United States for its defense. Japan’s political and economic systems are similar to those in the U.S., and Japan shares the American goal of curbing China’s growing influence in the Asia-Pacific region (including in the South China Sea). In addition, Japan and China have rival development banks aimed at helping emerging Asian nations.

Japan’s increased reliance on Chinese demand has led to concerns over whether the weakening Chinese economy will bring Japan down with it. Exports to China have also decreased notably on the back of the slowing Chinese economy. Elevated trade uncertainty has been weighing on Japanese exports.

Japan’s increasing dependence on Chinese demand is visible across several industries as the structure of exports has evolved considerably since the early 2000s. At one point, Japan’s exports were only assembled in China before being re-exported to Japan and other economies. Thus, Chinese demand had only a limited impact on Japanese exports.

In last few years, however, Japanese goods have been directly catering to China’s domestic demand. Sales of Japanese final products to China have increased significantly since the early 2000s from around 34% to 74% of total sales. The Chinese middle class has grown, and grown wealthier, stimulating demand for Japanese products. 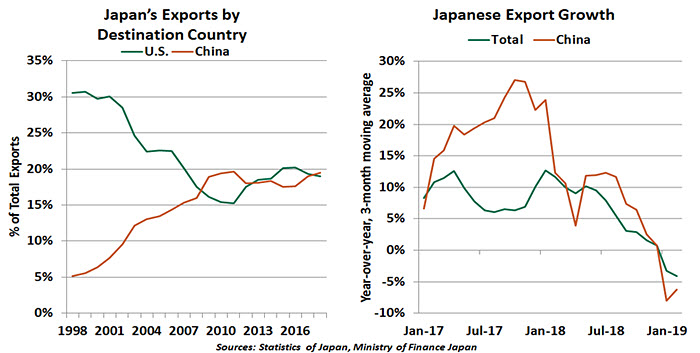 Weaker Chinese demand isn’t the only concern for Japanese exporters. China has transitioned itself from manufacturing textiles and toys to production of high-tech components, machinery and electronics. The percentage of value-added products made domestically for exports touched 87% in China compared to Japan at 79% in 2018. Chinese companies are now more direct competitors for Japanese firms.

Beyond trade, China is also an important source of overseas investment and tourism to Japan. But owing to China’s protective regime, Japan’s direct investment to China has grown sluggishly. China accounts for only 5.7% of Japan’s total outward foreign direct investment. By contrast, Japan has made a considerable amount of direct investment (around $470 billion) in the U.S., particularly in the wholesale trade and manufacturing sectors.

For Japan, balancing the economic and strategic aspects of its relationship with China is difficult. The task will become even harder if the wedge between Washington and Beijing widens further. But for now, the Japanese seem to have kept the two realms from interfering with one another. Their experience might be a useful lesson for others.

No Place for Partisans

Since its establishment more than 100 years ago, the Federal Reserve Board has included governors with a broad range of backgrounds, political views and life experiences. Some have been loud, others quiet; some are academics, while others come from industry. Organizations that invite a diversity of thought typically make better choices than those with more homogeneous constitutions.

While many Fed decisions are unanimous, debate within the walls is active and dissents do occur. Those who suggest the Board is mired in groupthink should have a closer look at the minutes, meeting transcripts and forecast dispersion. But while participants have their differences, the Fed’s culture is consensus-driven and apolitical. This character allows it to take a long view and lean against markets and fiscal strategy when necessary.

The proposed nominations of Stephen Moore and Herman Cain to the board of governors threaten to compromise the Fed’s strong character. Both have been major fundraisers for the president, and both have pledged to use their posts on the Board to support the White House program. They seem intent on bringing a political agenda into a forum that tries to operate without one.

The proposed selections of Moore and Cain come on the back of the president’s recent criticism of Jay Powell, the Fed chairman. In the most recent salvo, the president apparently told Powell, “I guess I’m stuck with you.”

This isn’t the first time a world leader has pressed for easier money to accommodate fiscal imbalances or boost political fortunes. But such campaigns create long-term problems that ultimately prove harmful.

The Fed is not infallible, and observers have frequently disagreed with its decisions. But those decisions are taken with the long-term interests of the economy in mind, and made on the basis of the best available information. The desire to favor one party or another doesn’t enter into the discussion.

There is no guarantee that Moore and Cain will ultimately be seated on the Fed. And if they are, two votes do not a consensus make. But for those who admire the Fed’s mission and morals, now is the time to speak up.