Gold Glimmers as the Pool of Negative-Yielding Debt Surges It’s been a tragic week, to say the least. It began with a fluke Ethiopian Airlines crash, which led to the grounding of all Boeing 737 MAX 8 jets worldwide, and ended with a hateful terrorist attack in Christchurch, New Zealand. On behalf of everyone at U.S. Global Investors, I want to extend my deepest sympathies to all those who were affected.

I’ll have more to say on airlines in a moment.

For now, I want to share with you a tweet by Lisa Abramowicz, a reporter for Bloomberg Radio and TV who often comments on the “fear” market.

“The pool of negative yielding debt has risen to a new post-2017 high of $9.2 trillion,” she writes. “Mind boggling at a time when the global economy is supposedly still recovering.”

Since Lisa tweeted this on Wednesday, the value of negative-yielding bonds has ticked up even more, to $9.32 trillion. This is still below the 2016 high of $12.2 trillion, but, as Lisa said, mind-boggling nonetheless. It also indicates that investors fear global economic growth is slowing. 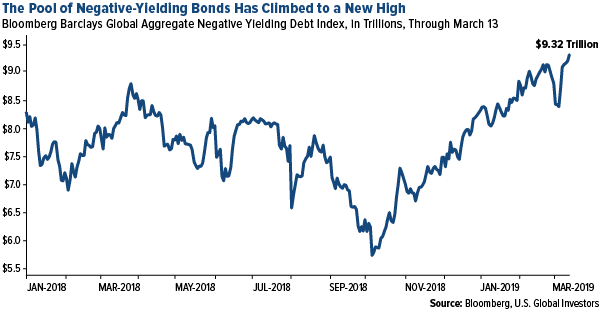 The yield on Japan’s 10-year government bond is back in negative territory, trading at negative 3 basis points (bps) today, while Germany’s was trading at a low, low 8 bps.

As I’ve explained to you before, low to negative-yielding debt has historically been constructive for gold prices. The yellow metal doesn’t have a yield, but in the past it’s been a tried-and-true store of value when other safe haven assets, such as government bonds, stopped paying you anything. In the case of Japanese bonds right now, investors are actually paying the government—and that’s before you factor in inflation.

This is just one of many reasons why I recommend a 10 percent weighting in gold, with 5 percent in physical bullion and jewelry, the other 5 percent in high-quality gold stocks and funds. Remember to rebalance at least once a year.

Aircraft Are Safer, Easier to Fly

Back to the Ethiopian flight. I’m confident we’ll soon learn what malfunctioned in the 737 MAX—both this week and in October during Indonesia’s Lion Air flight—so that accidents like this may never happen again.

Having said that, I think it’s important to keep in mind that commercial air travel today has never been safer in its approximately 100-year history. In 2017, the safest year for aviation on record, not a single life was lost in a commercial plane crash, despite more than 4 billion people around the world taking to the skies on scheduled passenger flights. You would be hard-pressed to find another major global industry, one that operates 24/7, with such an impressive safety track record. This is all largely thanks to continuous improvements in aviation technology. Over the decades, aircraft have progressively gotten safer and easier to fly, according to one aeronautics professor at MIT.

“The automation systems that we have on airplanes have demonstrably made airplanes safer,” R. John Hansman, director of MIT’s International Center for Air Transportation, told Boston’s WBUR radio station this week.

And the technological advancements continue today, with artificial intelligence (AI) and the internet of things (IoT) already starting to change the way we fly.

Consider Aireon. Founded in 2011, the aerospace tech firm is responsible for developing a next-generation airline tracking and surveillance system that has the capacity to measure every aircraft’s speed, heading, altitude and position—all in real-time. Using as many as 66 satellites, Aireon’s team gathers data broadcast by tiny transponders, which all U.S. and European planes will be required to carry by next year. It was the company’s data, in fact, that ultimately convinced the Federal Aviation Administration (FAA) to join the rest of the world in temporarily grounding the 737 MAX.

“Take a Ride on the Airline Stocks,” Writes the National Bank of Canada

In light of the accident, a number of research houses and brokerage firms released notes to investors this week reassuring them that Boeing’s troubles should have only minimal impact on the airline industry as a whole.

Shares of Boeing, the largest company in the Dow Jones Industrial Average by market cap, surged as much as 2.5 percent today after it was announced that the jet manufacturer plans to roll out a software update for the MAX 8 and 9 within the next 10 days—much sooner than initially expected.

Analysts at Raymond James point out that the “737 MAX 8/9 aircraft are still a small part of overall fleet for most U.S. airlines, which in off-peak travel season can likely be covered by higher utilization of existing fleet or delays in certain aircraft retirements.”

Vertical Research’s Darryl Genovesi, an expert in airline revenue, says that he believes the 737 MAX grounding will have an “immaterial” effect on U.S. airlines’ first-quarter earnings per share (EPS). And if the grounding is extended into the second quarter, or into the second half of the year, we may even see higher EPS due to a supply demand imbalance.

Genovesi writes that Vertical’s models indicate that, in the event of an extended grounding, “system RASM [revenue per available seat mile] would increase by ~200 bps… This would be ~3 percent accretive to second-quarter EPS, on average, across the group including a ~9 percent EPS boost for Alaska Airlines, JetBlue and Spirit Airlines and low-single-digit boost for American Airlines, Delta Air Lines, United Continental and Allegiant Air, partially offset by a low-single-digit EPS reduction for Southwest Airlines.”

Southwest has the largest number of 737 MAX 8s in the world, with a reported 34 planes in its fleet.

Finally, looking at the Canadian market, the National Bank of Canada says that both Air Canada and WestJet Airlines “remain constructive despite the recent turbulence.”