Taxes Are a Divisive Issue for Europe, Tax Returns After Tax Reform, Sympathy for the IRS

As tax documents fill our mailboxes in the U.S., we explore the individual income tax regimes across the world.

Politicians for centuries have used taxation as a primary incentive to garner greater public influence. But the current surge in populism, particularly across Europe, revives age-old grievances from taxpayers.

Since the onset of the financial crisis, European politicians, particularly in countries facing severe stress, have been forced to pursue fiscal consolidation efforts through a combination of higher taxes and lower spending, referred to as austerity. These measures have endangered economic activity, producing severe recessions in places like Greece and Spain. As a result, public unrest has risen across Europe, leading to the resurgence of populism.

Anger over austerity still festers. Initially, concern was directed at cuts in government programs and payments. But as we are finding out, there is substantial antipathy over the level of taxation in many European countries. No one enjoys paying taxes, especially if they have no say in their determination or can’t sense benefits in return. Anti-tax movements are ages old, contributing substantially to the fall of monarchic models of government across Europe. Modern democracies have given the people a voice in setting taxes and disbursing the proceeds, but that hasn’t quelled concern.

Taxes collected directly (such as personal income tax and corporate tax) or indirectly (such as value added tax [VAT] and customs duty) by governments are revenues used for funding infrastructure, social welfare, education and defense. They can serve as a tool to rebalance income inequality. Taxes can also be used as an element of social policy to encourage or discourage certain types of activity. 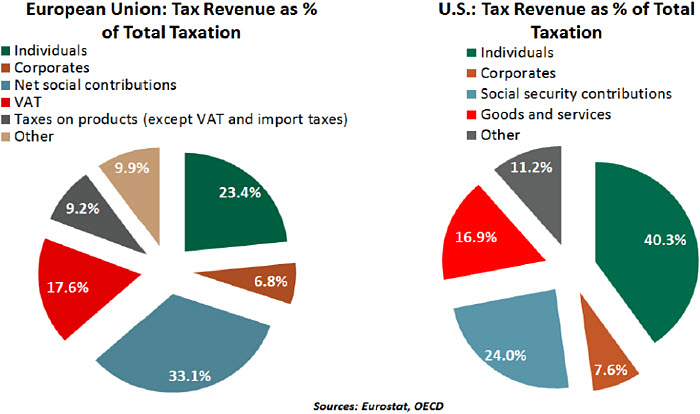 In market economies, consumers, producers and governments change their behavior in response to taxes. Higher levels of collection allow governments to increase public expenditure for items like infrastructure, education and health care that have the potential to promote long-term prosperity. On the other hand, high income-tax rates can discourage individuals from working, saving and investing.

The European Union (EU) does not have a direct say in how countries spend their tax revenues and set individual income tax rates. However, to minimize potential risks from high budget deficits and large accumulated debts, the European Commission provides national tax policy recommendations aimed at making them more efficient and growth-friendly.

Many European countries have struggled to strike the right balance since the financial crisis. Ireland, on one side of the spectrum, cut its corporate tax rate to a very low level and enjoyed substantial inflows of commerce. Today, Ireland has a balanced budget and one of the highest rates of economic growth in the EU. More recently, tax cuts in Spain provided an accelerant to its economic expansion.

By contrast, France and Italy addressed their fiscal challenges by relying heavily on raising taxes (including the VAT), rather than opting for public spending cuts. Several nations also refrained from cutting welfare benefits while deferring desperately needed reform of their tax and benefit systems. (In fact, some increased retirement benefits instead of making needed cuts.) This drove the surge in government debt levels in several
EU nations; it also created friction with the European Commission, which checks national
budgets to ensure that they are within rules covering members of the eurozone.

Even though the top marginal tax rates across a number of EU economies have fallen since the turn of the century, they remain high by global standards. Among the 15 Organisation of Economic Co-operation and Development (OECD) countries with the highest individual tax rates, 10 are from Europe, of which eight are in the eurozone. Sweden has the highest marginal tax rate, going as high as 60.1%.

A few European countries have increased tax rates notably in recent years, including Greece, Portugal and France. In addition, when taxes of all kinds are accumulated, populations begin to question the equity of the system; French attempts to cut taxes on wealth and corporations were not taken well by the general public. This prompted the “yellow vest” protests, which virtually paralyzed the country and forced a policy about-face. The high tax burden in several of these economies has also contributed to the rise in resentment against current establishments.

France’s challenges are further complicated by the still-high unemployment rate. President Emmanuel Macron’s reforms aimed at overhauling the labor market by removing protections and red tape were well intentioned, but they have resulted in layoffs. Denmark, which has a higher individual income tax burden than France, has not witnessed unrest thus far, and its economy continues to do well despite the conventional wisdom that higher taxes hinder growth.

Of course, cultural factors explain differing results across countries. But the cross-section provided by Europe illustrates that there is no simple formula for constructing tax systems. Regimes must mediate between revenue collection and growth promotion, balance equity with efficiency, and promote (or discourage) certain types of activity. Getting this just right is almost impossible.

But the complexity of the task does not excuse European countries from taking it up. In addition to current fiscal challenges, a rising pension gap and rising healthcare expenditures for ageing populations will make the challenge even more difficult as time goes on. Europe was a beacon for the world during the Age of Enlightenment; today, Europe could desperately use some modern-day enlightenment as it grapples with tax policy.

Nearly 250 years ago, demonstrators in the fledgling American colonies threw a shipload of tea into Boston Harbor. The colonists’ grievance was the requirement to pay taxes to the Crown without representation in Parliament; revolution followed soon thereafter. The country was founded in a dispute over taxes, and the proud American history of resisting taxes continues to this day.

The need for taxation is clear. The top U.S. government spending categories include healthcare, Social Security and interest on existing debt. Mandatory expenditures and interest together represent more than 70% of federal spending. Meanwhile, discretionary spending is dominated by the military budget, an expenditure that many are reluctant to reduce. While there is room for debate over the appropriate size and scope of government, that does not change today’s need for government funding.

Individual tax returns for the year 2018 will be different. The year started with the implementation of the Tax Cuts and Jobs Act (TCJA). Most workers saw a prompt gain to the bottom line of their paychecks as tax withholdings were adjusted to reflect new tax rates. For the 70% of filers who did not itemize their tax returns, the primary benefit of tax reform has been realized.

In the next two months, however, taxpayers with more complex tax returns will put tax reform to the test. Many minor deductions and personal exemptions were removed, and deductions for state and local taxes were capped. To compensate, the standard deduction was doubled for all taxpayers, and child tax credits were added. The moment of truth for TCJA is upon us.

Upcoming tax refunds may not meet taxpayers’ expectations. Roughly 80% of taxpayers withhold too much in taxes from their pay in the course of the year, expecting a refund upon filing. But recall that withholding guidance changed in 2018. Most consumers have accrued less tax and may realize smaller refunds than the amounts to which they were accustomed. A smaller refund reflects a better use of the taxpayer’s money — better to keep it than to give the government an interest-free loan — but may nevertheless feel like a loss. Taxpayers should manually calculate the ratio of their total tax to total income to see how their actual effective tax rate changed from 2017 to 2018.

The TCJA has had one clear outcome thus far: Federal tax receipts are down. When the Congressional Budget Office assessed TCJA, it forecasted the reduced receipts would lead to the government running a $1 trillion deficit from 2020 onward. By other official estimates, the U.S. shortfall will reach the $1 trillion mark this year. The bill’s supporters said that the gain to economic growth would offset any new deficit, but this balance is
unlikely to materialize.

We are again learning that the goals of cutting taxes and reducing the national debt are incompatible. Absent either an increase in taxes or a substantial realignment in government spending, the national debt will only continue to rise. And this challenge is growing just as state governments are reckoning with their own fiscal maladies. 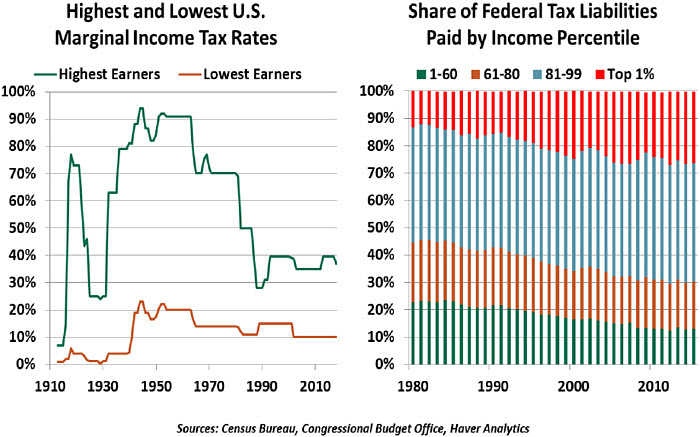 Calls for higher taxes are in the headlines as the 2020 presidential election enters the horizon. Early contenders have proposed higher marginal tax rates on top earners and new taxes on accumulated wealth. Dressing down the wealthy may get applause at rallies but overlooks how the progressive tax system is meeting its goals: The top 1% of taxpayers pay more than a quarter of total federal tax receipts, commensurate with their share of income. And high taxes increase the value of tax-minimizing behavior. In a scenario modeled by the Tax Foundation, a 70% top tax rate could lead to lower government revenue as high earners shelter assets and defer capital gains.

Taxing the rich is not a novel idea. But high-earning taxpayers need not worry yet: There is ample precedent for fighting back against taxes.

There is a line of jokes that begins: “You know it’s going to be a bad day when …”

The likelihood of that last experience has been declining over the past few years. And counter to what you might think, that’s a bad thing.

No one likes paying taxes, and the IRS has traditionally been one of the most vilified agencies in Washington. It can be very aggressive in its pursuit of alleged tax evaders, using liens on income and property as leverage. The IRS was among the departments affected during the recent government shutdown, and likely elicited the least sympathy.

Responding to popular antipathy toward the IRS, Congress has consistently reduced funding for its operations.

Some might think that automation is allowing the IRS to sustain coverage with fewer people. But the numbers don’t bear that out. A household in the highest earnings bracket is only about one-third as likely to be audited today as it was in 2010. It appears that oversight of returns has simply been scaled back.

The IRS has estimated that only 84% of taxes owed are paid every year; the revenue shortfall to the U.S. government is about $400 billion annually, or almost 3% of gross domestic product. With yearly deficits skyrocketing to more than $1 trillion, some recovery of back taxes would be very much welcome. The investment of resources to aid in the collection would produce immense returns for the U.S. Treasury. The IRS needs more funding … and soon.

For those who owe, it will be a bad day when the IRS arrives on the doorstep. But it will be a good day for the rest of us.