Even the best parent/child relationships have rough patches. The parent has to balance roles as the child’s #1 supporter and as the family’s Chief Reality Officer. Growing children need their parents for support, but also crave the freedom to make their own way. Some periodic friction is par for the course.

Less common are situations where the two roles become blurred. When lines of authority aren’t clear, it becomes much more difficult to reach a resolution. Careful communication between parties is required to sustain coordination.

Central banks and financial markets are very closely related. When they are in synch, both perform well. When they are not, outcomes suffer and arguments arise over who is the ultimate authority. As we settle into 2019, the dynamic between markets and monetary authorities will be critical to performance.

This is going to be a difficult year for central banks. The economic outlook has become much less certain, with China looking particularly shaky. Traditional links between growth, employment and inflation are fraying, diminishing the value of frameworks used to calibrate monetary policy. There is no roadmap for unwinding quantitative easing (QE). Trade policy is at a crossroads, and politicians around the world are questioning central bank independence. 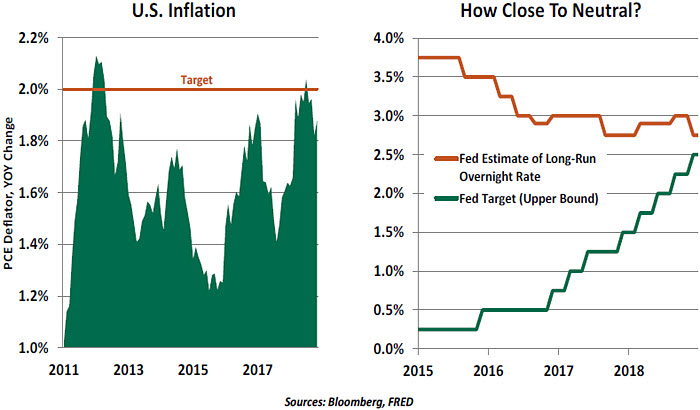 Amid these challenging circumstances, the Federal Reserve struggled during the fourth quarter. The Fed seemed slow to appreciate down-side risks to economic growth, and sent conflicting messages about its intentions. Fear of a Fed overreaction was among the reasons cited for the recent correction in world equity markets.

The Fed has been slowly normalizing conditions since the end of 2015, calibrating each step carefully. Interest rates remain very low by historical standards, but are approaching their long-run “neutral” levels. The Fed’s most recent projections call for more hikes, which would take rates into restrictive territory.

To the markets, this was tone-deaf. While the Fed’s forecast (and almost all private forecasts) calls for continued growth, threats to the expansion are accumulating. And inflation remains remarkably calm, even though unemployment is near a 50-year low. A pause to assess seemed warranted.

Matters were complicated by inconsistent statements from Fed Chairman Jerome Powell. Unlike his immediate predecessors, Powell is an enthusiastic communicator; he seems more at ease speaking in moderated settings, as opposed to standing behind a lectern.

In early October, Powell was interviewed for a news program, and remarked that interest rates were “a long way from neutral.” This was not what the markets wanted to hear. When combined with worries about U.S./China trade negotiations, Powell’s characterization created the background for bearish sentiment.

Seven weeks later, Powell restated his position, saying that interest rates were “just below” neutral. While the clarification was welcomed by investors, the relatively sudden change of diagnosis did not help the Fed’s credibility.

So where does the Fed stand in the tightening cycle? As Powell said last summer, the “neutral” level of interest rates is difficult to determine, and may shift over time based on economic and market circumstances. The accumulation of risky debt, especially in emerging markets and in lower ratings grades, narrows the distance between performance and default. Taking all of this together, we think that the Fed is close to being finished with its rate increases.

The Fed’s balance sheet has also been the subject of consternation. The Fed has been slowly reducing its holdings of Treasury and mortgage-backed securities for more than a year. This has been done formulaically, to provide transparency to the fixed income markets. 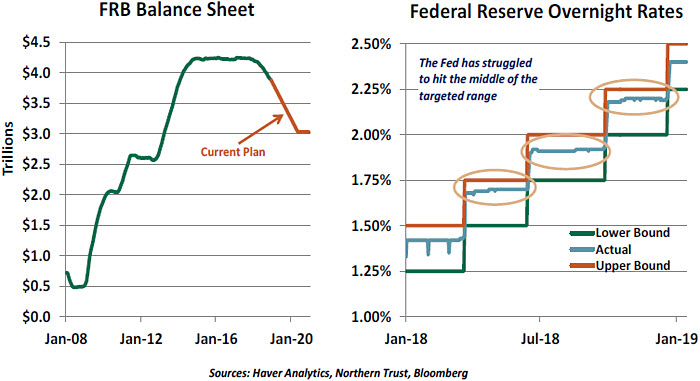 Just as it was difficult to determine the impact of QE, it is difficult to gauge how the unwinding of the program (known to some as quantitative tightening, or QT) will affect economic activity. Over the past nine months, though, the Fed has been having trouble steering overnight rates to their targeted levels. This may be a sign that reserves in the banking system are become scarce, and that credit conditions are tightening more rapidly than previously thought.

Central banks have typically preferred tightly controlled and consistent messaging, so as to steer markets clearly. Appreciating this, Powell’s comments during 2019 have been more heavily scripted and more dovish. He will likely be more circumspect in offering thoughts during the balance of the year.

But part of the market’s dissatisfaction with the Fed may have nothing to do with messaging. For the first time in a long while, monetary policy is moving in a direction that the markets don’t like, which may explain some of the harsh reaction. It is worth noting that the Fed is not mandated to support asset prices in all situations; doing so, in fact, could have adverse long-term consequences for the economy.

Some have suggested that markets know something that the Fed doesn’t, and this may be the case. But 10% equity market corrections occur, on average, about once every year. Most of the time, the losses aren’t indicative of economic distress and are retraced quickly. So the markets, collectively speaking, are no better at forecasting that central banks are. Some periodic friction between markets and central banks is par for the course. Improved communication should help improve coordination. But the Fed holds the authority to set monetary policy, and markets need to respect that.

“No Room for Complacency”

The eurozone economy lost considerable momentum in the second half of last year; real growth for the third quarter was only 0.2%. There were hopes that the economy would rebound, but incoming data has proved disappointing. The retreat comes at a delicate time.

The eurozone’s three largest economies have been most affected. Germany, the engine of the region’s growth, narrowly avoided falling into recession at the end of 2018. German activity has suffered due to the auto sector’s ongoing struggles in adjusting to new emission standards and transportation bottlenecks related to low water levels in the River Rhine, a key cargo route for German chemical producers.

France has been paralyzed by the extended ”yellow vest” protests, which forced the government to retreat from planned fuel tax increases and implement additional fiscal stimulus. These steps should be helpful to growth during the balance of this year.

Italy, unfortunately, was unable to avoid a recession. As we detailed late last year, Italy is facing some fundamental challenges which will not be easy to address. Fortunately, Italy’s budget impasse with the European Commission was settled amicably, and allows for some additional government stimulus.

While the third quarter disappointment was largely a result of a few transitory factors, indicators for the fourth quarter and early 2019 suggest that weakness may be due to something more fundamental. A drop in exports, amid greater tensions over international trade and the Chinese economic slowdown, was an important factor behind diminished growth in 2018. Persistent Brexit-related uncertainties have also played their part; as the International Monetary Fund recently warned, the slowdown in the eurozone could be accentuated by a no-deal or disorderly Brexit. The uncertainty surrounding these situations is hurting business and consumer confidence in Europe. 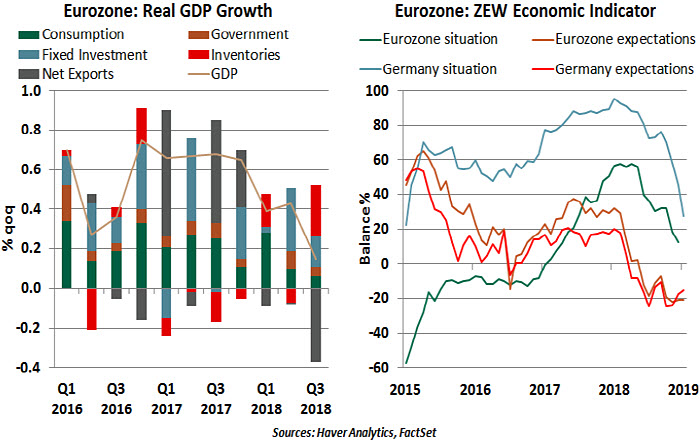 We are not forecasting a sustained soft patch for the eurozone. Domestic fundamentals are still broadly in good shape: lower unemployment, lower inflation (thanks to falling oil prices), an ongoing recovery in wages, and supportive monetary and fiscal policy will boost consumption in 2019. Manufacturing orders have shown signs of stabilization, backlogs of work are at an all-time high and automotive orders have been increasing.

But risks appear aligned on the down side. The slowing global economy, international trade disputes and a fragmented political landscape threaten the region’s outlook.

Continued sluggishness would complicate the European parliamentary elections in May. Populist or Eurosceptic candidates might stand to gain from economic weakness. Their vision for Europe’s institutional framework, its leaders and proper policy are very different
from the status quo. Any retreat from continental cohesion would be a bad outcome for the eurozone economy.

To keep the populists at bay, European governments may be pushed to spend more domestically and delay structural reform. This may be helpful to the economy in the short-term, but not in the long run.

In a speech at the European parliament earlier this month, ECB President Mario Draghi said, “There is no room for complacency.” We would agree.

Throw It Over the Wall

As the U.S. federal government shutdown continues its record-setting run, its severity is growing in ways that are becoming harder to ignore.

Thus far, markets appear to have shrugged off the shutdown. Overall economic impacts are projected to be modest, and some of this quarter’s lost activity will be recouped when the government reopens. A pause in rate hikes from the Fed is now virtually assured as the government-published economic data on which the Fed depends will be delayed and skewed by the shutdown. Trade negotiations between the United States and China, which have worried investors, have shown modest progress.

Markets were also buoyed by the strong December employment report, but the January report (to be published February 1) may show a less optimistic picture. The roughly 400,000 furloughed federal workers will be counted as unemployed in the household survey, which may raise the unemployment rate. However, because their back pay has been guaranteed by Congress, the establishment survey will count them as paid employees. This could lead to a confusing combination of a higher unemployment rate with no corresponding loss of jobs.

The shutdown has hit certain Americans severely. Federal workers were promised back pay, but thousands of contract workers have lost wages permanently. Overall, forecasters estimate the economy is losing 2.5 to 5 basis points of growth per week of shutdown, a weekly deadweight loss of up to $700 million.

Conventional negotiations have proven futile. This past weekend, President Trump broke the silence by offering to soften certain immigration policies in exchange for border wall funding. The Democrats, however, will not negotiate under these circumstances. Allowing the shutdown to become a negotiating tactic would set a problematic precedent for this and future administrations.

As the situation drags on, unpaid federal workers are nearing a breaking point. Many cannot afford to miss paychecks, and may undertake strikes or slowdowns which would hinder air traffic, tax return processing, or the Federal courts. The resulting discomfort could motivate the White House and the Congress to compromise. Whatever the means, we are eager to see the end.