Making Sense of the Markets and Shutdown Shock

An expanding number of universities in the United States, including my alma mater, are making standardized testing optional for applicants. Critics say the tests are imperfect predictors of success in college, and suggest placing additional emphasis on a candidate’s classwork, activities and essays.

I am incredibly fortunate that the new rubric was not in place when I was seeking admittance to the University of Chicago. Then, as now, the school exposes students to a range of disciplines through a core curriculum, hoping to develop well-rounded thinkers. Unfortunately, one of the essays in my application expressed a strong desire to focus on mathematics and not waste time in art class. Fortunately, my test scores overcame my lack of tact.

To my surprise, I enjoyed studying art in college, and have even come to appreciate its most modern expressions. In a way, there is a parallel between trying to understand an abstract painting and trying to understand financial markets; both present incomplete and confusing images that allow for a range of interpretations.

Such was the exercise that many of us were going through during the final weeks of 2018. During a period where markets typically settle in for the holidays, equity prices experienced steep declines and heightened volatility. At the close of December, stocks had reported their worst annual performance in a decade. 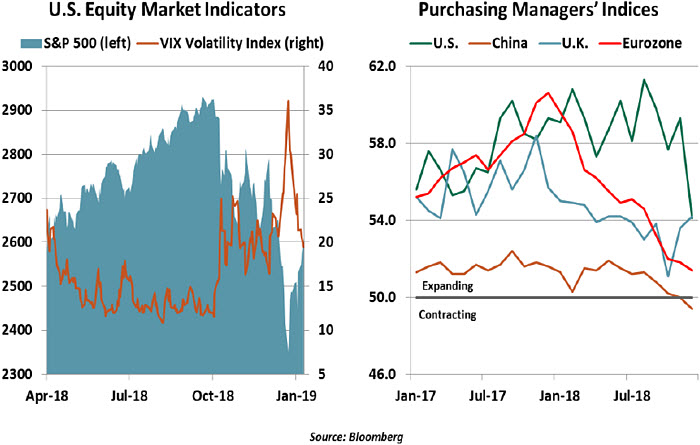 It is hard to know precisely what is on the mind of the markets; wide intraday swings experienced last month suggest mood shifts were substantial and frequent. But a series of concerns have accumulated to threaten what has been one of the longest and strongest bull markets we have ever experienced. By analyzing the bricks in what became a wall of worry, we can provide some conjecture on how these issues might evolve during the balance of this year.

1. Global growth is slowing. Economic activity sailed through the first half of last year, but has been tapering off since. As we noted in our recently released Global Economic Outlook for 2019, some of this was to be expected; in particular, the stimulus from U.S. tax reform is past its peak. But some forward-looking indicators from Europe and China have shown unexpected weakness during the past several months.

The Institute for Supply Management (ISM) index, shown above, requires some perspective. A reading above 50 indicates expansion; for most markets, recent declines indicate a return to normalcy from unusually high levels. The ISM index is survey-based, or “soft” data; its link to future output is not perfect. Nonetheless, the market is concerned the downward trend may continue. And the index for China is below 50, which leads to suspicion that…

2. The trade war between the U.S. and China is doing significant damage. Several turning points in the market’s volatile fourth quarter journey can be linked proximately to changes in the tone of relations between the world’s two largest economies. Markets rallied in early December after the two sides shared dinner and announced a 90-day delay in tariff escalation. But in the days that followed, negative comments from Washington darkened the mood. 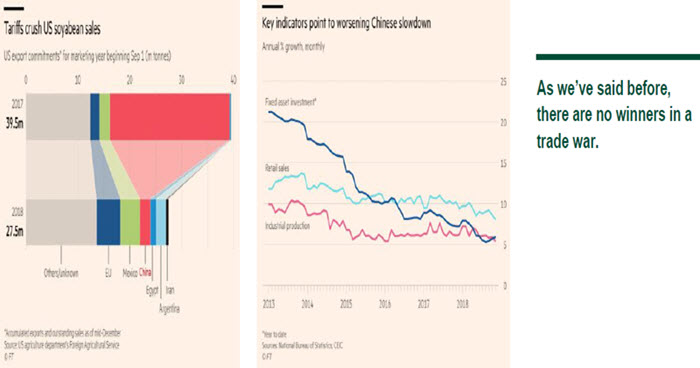 In the United States, the impact of the trade conflict has been unpleasant for some sectors (such as farming), but modest overall. What is becoming increasingly apparent, though, is that the conflict is coming at a delicate economic time for China. Activity there seems to have been decelerating for some time; consumers are pulling back and manufacturing is slowing. There have long been concerns about the stability of China’s financial system, which is now burdened with twice as much debt as it had ten years ago.

The Chinese government has been forced to implement a range of stimulus measures, including tax cuts and reductions in bank reserve requirements. A hard landing in China would be challenging for its trading partners and for global markets. We’ll have a more complete analysis of this situation in next week’s issue.

Negotiators for the U.S. and China spent three productive days together this week, one more than scheduled. There remain substantial differences between the two, which will require further discussion. But both sides may be more willing negotiators than some suspect, and tensions could consequently temper further in the months ahead. A worst-case outcome is by no means assured.

3. The Federal Reserve is being too aggressive. In the midst of the market’s December anxiety, the Federal Reserve went ahead with a rate increase that had long been expected. This step was the latest in a continued a series of normalizing moves which affirm that the U.S. economy is performing well, and no longer needs the same level of monetary accommodation.

But Fed Chairman Jerome Powell failed to provide the reassurance the market was looking for in the post-meeting press conference. He seemed to minimize the risks to the outlook and endorse the two further rate hikes that were resident in the Fed’s “dot plot.” He also suggested that the Fed’s balance sheet would continue to decline on schedule. Investors, hoping for a more dovish tone, were disappointed. 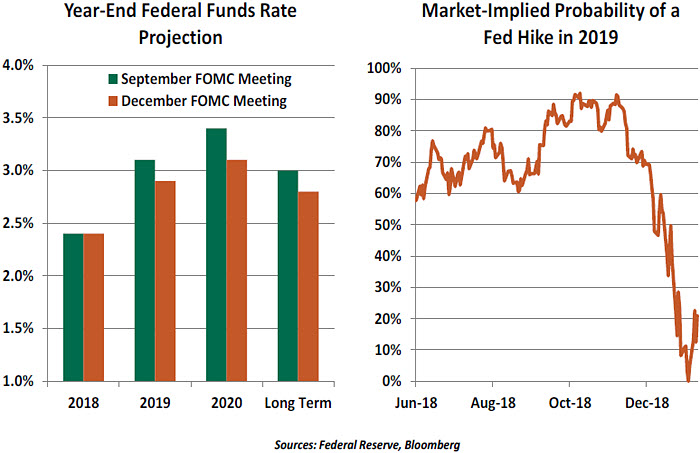 In a speech last week, Powell provided a more comforting perspective. All aspects of monetary policy, he offered, would be calibrated based on incoming data and events. Minutes of December’s Fed meeting confirmed this orientation. While the Fed’s forecast (and that of most private forecasters) shows continued growth, the array of potential downsides suggest increasing caution. As highlighted in our most recent U.S. Economic
Outlook, we are only expecting one more interest rate hike this year from the Fed, likely at mid-year.

4. Policy-making in many parts of the world is becoming more erratic. As we describe in the following article, the U.S. government began the year with a partial shutdown. Relations between the Democratic House and the White House are deteriorating. Walls are rising in some spots, but not in others.

America has plenty of company, though. Political dysfunction persists in the United Kingdom; the parliamentary vote on the current Brexit proposal will take place next week, and it seems doomed to defeat. France has been thrown into turmoil by a series of increasingly violent street protests. The dramatic fall in oil prices will continue to challenge producers in the Middle East, an area already dealing with considerable regional stress.

Markets have been remarkably calm in dealing with potential sources of volatility over the last decade. The crack in this veneer of cool may be declining confidence in policy makers to make matters better and not worse. Situations that may have been seen as manageable in the past may now be much less so.

Happily, the markets have performed much better in the new year, with global equity indices regaining a good portion of the ground lost in the fourth quarter of 2018. But with so much potential for twists and turns on the fronts discussed above, volatility may remain elevated.

Interpreting market movements is much harder than understanding art. On a canvas, the shapes and colors don’t shift around from one moment to the next. For investors, getting a clear picture of what the markets are thinking remains very challenging.

Another Trick for The Wall

As of Saturday, December 22, the U.S. federal government entered a partial shutdown, with economic impacts growing larger by the day.

This shutdown does not bring the entire federal government to a halt. Earlier this year, funding bills were passed for areas including defense, education, veteran’s affairs and energy, representing about 75% of the federal government’s functions. However, these bills were passed in a piecemeal manner that left other departments, including Homeland Security, Commerce, State, Justice and Interior, subject to continuing resolutions.

This is not our first shutdown. Twice in 2018, debates in Congress stalled funding resolutions. Those shutdowns were brief; the first lasted only one business day, while the other was resolved overnight before working hours began. These incidents were so short as to be generally forgotten, perhaps giving legislators a naïve impression that shutdowns can be a clever negotiating tool.

But the stakes grow higher as the impasse endures. A number of government services have been curtailed, with emergency funding or unpaid work only permitted for workers in essential roles. National monuments are closed, and national parks are not maintained. The Department of Commerce cannot process its large caseload of requests for tariff exemptions. The Securities and Exchange Commission may have to delay initial public offerings of stock. Starting next week, staff of the United States Trade Representative will
face furloughs just as negotiations with China appear to be gaining traction.

The consequences are most tangible to the government workforce. Approximately 800,000 federal workers are affected, of which 420,000 are classified as essential and are working without pay, while the remainder are benched on unpaid furlough (with a precedent, but no promise, of back pay). Those workers missed their first paycheck today and are tightening their belts. Subcontractors and vendors that serve the government will also face unpaid invoices and stalled projects. Meanwhile, the Department of Agriculture (USDA) cannot process the subsidies promised to farmers who incurred losses due to Chinese tariffs.

Initially, creditors of these impacted parties may extend some leniency in good faith, but this will have its limits. A landlord may kindly accommodate late payments from a furloughed tenant, but the landlord’s mortgage lender may not be so sympathetic.

This uncertainty around cash flows will crimp consumer spending, which will weigh on first-quarter gross domestic product (GDP) growth. Forecasters estimate a 0.1% impairment in the growth rate due to the shutdown, assuming a limited duration. The loss may sound tolerable, but it will impact populations particularly at risk. Without a functioning government, the Supplemental Nutrition Assistance Program will run out of funds to provide food for its 40 million recipients.

Measuring the effect of the shutdown is complicated by the closure of statistical bureaus. The U.S. Bureau of Economic Analysis, the Census Bureau and the USDA are shuttered. Data releases related to home sales, international trade, construction spending and factory orders have already been delayed. The first estimate of fourth quarter 2018 GDP growth was to be published January 30, but that date is becoming less plausible.

Longer term, the risks are severe. The last Congress passed a bill that suspended the U.S. debt limit through March 2, 2019. As of that date, the government’s authority to pay its bills will be curtailed. When the debt ceiling was used as a political football in 2011, the U.S. suffered its first ever credit rating downgrade. The U.S. Treasury can prioritize payments to temporarily avert a default, but this capacity will run out over the summer.

The U.S. fiscal year ends on September 30, at which time a new budget must be put into effect. If no budget has been agreed by Congress at that time, another shutdown looms. Budget negotiations are the appropriate time to make arguments; deliberations can be healthy. Given the current rancor over a relatively small (but highly symbolic) $5 billion funding request, we are braced for dramatic arguments and slow progress passing a budget.

As of today, the current episode is tied for the longest federal shutdown over a funding gap, with no clear end in sight. As the consequences grow larger, the political cost of capitulation will appear smaller than the real cost to U.S. residents. And it will only raise the stakes for the next fight. The fiscal overture has been loud. The movements that follow will make plenty of noise.