Gold Is Beating the Market for the Month, Quarter, Year and Century

What might surprise some of you is that gold has also outperformed the market for the century (344 percent versus 67 percent). 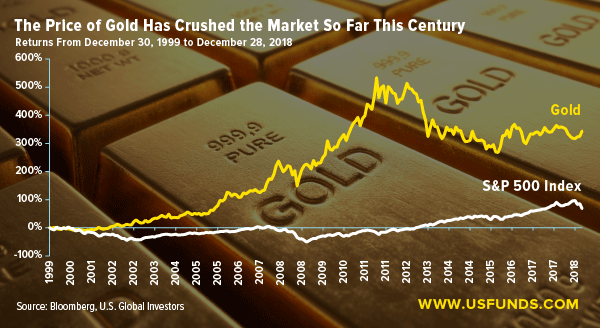 What this means is that, even though the yellow metal is still down from its 2011 peak, it has proven itself as a valuable diversifier in most any investor’s portfolio. And if stocks are headed for another big pullback next year, it could become even more valuable.

Looking back over the past 12 months, I’m not surprised to see that my five most popular and widely shared posts of 2018 involve gold (with one exception). Below I count them down, beginning with a story about Texas, the home state of U.S. Global Investors.

5. Texas Gold Investors Just Got Their Own Fort Knox

The Texas Bullion Depository, the first of its kind in the U.S., officially opened to the public in Austin in early June, capping three years of planning and construction. At the time, Texans were able to deposit their gold and other precious metals at an already-existing facility. Earlier this month, though, officials broke ground on a new, state-of-the-art, 40,000-square-foot facility in Leander, Texas, just north of Austin. This is wonderful news. Because Texas is such a trend-setting state, it might encourage other states to look into creating their own depositories. It also has the potential to attract even more investors to precious metals, which I believe are crucial components of any well-diversified portfolio.

4. It’s Time for Contrarians to Get Bullish on Gold

For most of 2018, the gold bears were large and in charge, with hedge funds shorting the yellow metal in record numbers this past summer. A major contributor to this is gold’s negative correlation to the U.S. dollar, which was strong relative to other major world currencies throughout the year.

A bottom in gold prices looked especially likely after Vanguard, the world’s largest mutual fund company, announced it was closing its precious metals and mining fund. Back in 2001, when gold had similarly found a bottom, Vanguard dropped the word “gold” from what was then the Gold and Precious Metals Fund, and the change coincided with a decade-long precious metals bull run. So could this mean another bull run is in the works? No one can say for sure, of course, but the timing of Vanguard’s announcement was certainly interesting. Now that gold is trading above $1,280 again for the first time since June, my confidence that the metal is set for a huge breakout has only grown stronger.

3. Here’s How We Discovered This Disruptive Gold Stock Before It Went Public

In November I shared with you one of my favorite new precious metal jewelry companies—Menë. You might not be familiar with the name yet, but you could be soon enough. In its first 10 months of operation, Menë did as much as $7 million in sales, and in more than 53 countries, as of October.

Founded in 2017, the company’s mission is to disrupt the gold jewelry market. It aims to do this by making its pieces strictly from 24-karat gold or platinum, selling directly to the consumer and pricing its merchandise fairly and transparently. Unlike traditional sellers, Menë prices its jewelry based on the changing value of gold, then charges a 15 percent to 20 percent design and production fee on top of that.

Here at U.S. Global Investors, we believe gold is money and a timeless investment. Menë , which takes its name from the Aramaic word for “money,” has clearly run with that idea, going so far as to trademark the phrase “investment jewelry.” We see the company as an attractive way to invest in gold’s Love Trade.

2. Which Has the Biggest Economy: Texas or Russia?

With Russia in the news almost daily this year, thanks mostly to the investigation into the 2016 U.S. presidential election, I wanted to know which had the larger economy—Russia or Texas. (Spoiler alert: It’s Texas, by about $400 billion.) On a similar note, the International Energy Agency (IEA) just issued its prediction that, by 2025, the total amount of U.S. oil production would equal that of Russia and Saudi Arabia combined.

1. It’s Time for the Fear Trade to Move Gold Prices

My post popular post of 2018 was, coincidentally, also the very first thing I wrote this year. The yellow metal had ended 2017 up more than 13 percent, its best year since 2010, while senior gold miners gained more than 11 percent. All of this occurred even as the stock market closed regularly at all-time highs and the price of bitcoin was rising by leaps and bounds.

I attributed gold’s strong 2017 performance mainly to the Fear Trade, specifically to concerns over inflation. Interestingly, inflation never really materialized this year—the year-over-year percent change in the consumer price index (CPI) didn’t even breach 3 percent. Most forecasts for 2019 are just as mild.

However, there are other things to keep an eye on in the new year—namely, the ballooning U.S. deficit; growing debt at the consumer, corporate and government levels; rising interest rates; and signs of a global economic slowdown. What’s more, Democrats take control of the U.S. House of Representatives next month. We can probably expect to see multiple investigations into the Trump administration, which could possibly slow the progress of additional pro-growth, pro-business policies.

Taken together, these risks burnish the investment case of gold’s Fear Trade. I remain bullish on the metal for 2019 and recommend a 10 percent portfolio weighting: 5 percent in bullion and jewelry and the other 5 percent in well-managed gold mining stocks, mutual funds and ETFs.