Today gold mining investors and Canadian capital markets received an early Christmas gift. Wheaton Precious Metals, one of the largest precious metals streaming companies in the world, announced that it reached a settlement with the Canadian Revenue Agency (CRA), the equivalent of the IRS. Before now, Wheaton had been in an ongoing legal feud with the agency over international transactions between 2005 and 2010.

According to the agreement, income generated through Wheaton’s foreign subsidiaries will not be subject to Canadian taxes. The company, however, will need to mark-up the cost of service provided to foreign subsidiaries, from 20 percent to 30 percent.

“The settlement removes uncertainty with the use of our business model going forward and puts the tax issue behind us so that we can continue to focus on what we do best: building and managing our high-quality portfolio both organically and by accretive acquisitions,” commented Randy Smallwood, Wheaton president and CEO.

“We expect the stock to react positively to the news given the tax dispute was an overhang,” Credit Suisse analysts shared in a note to investors today. Indeed, Wheaton stock was trading up as much as 12.4 percent in New York following the news, hitting a four-month high of $19.63 a share. 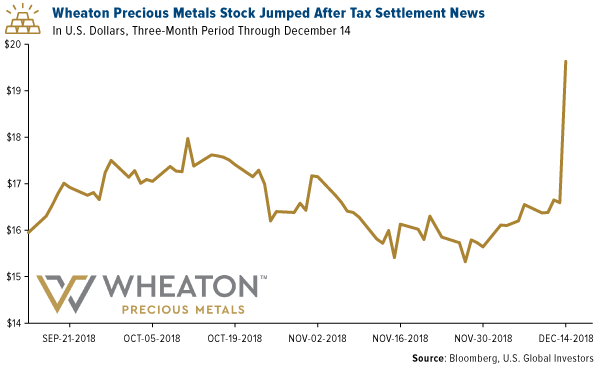 I want to congratulate everyone at Wheaton, particularly Randy for his resilience and strong leadership. He’s always offered invaluable insights to our team and investors. I encourage interested registered investment advisors (RIAs) to check out the July 2018 webcast I did with Randy, where we discussed our seven top reasons to invest in gold. You can listen to the replay by clicking here. The investment case for gold and other precious metals got a boost this week in light of news that might concern some equity investors. The European Central Bank (ECB) announced that it would be drawing quantitative easing (QE) measures to a close by halting its 2.6 trillion-euro bond-purchasing program, begun four years ago as a means to provide liquidity to the eurozone economy after the financial crisis. Interest rates, however, will be kept at historically low levels for the time being.

The ECB, then, will become the next big central bank, after the Federal Reserve, to end QE and normalize monetary policy. Although it’s steadily been tapering its own purchases of bonds, the Bank of Japan (BOJ) is still committed to providing liquidity at this point. Assets in the Japanese bank now stand north of 553.6 trillion yen ($4.86 trillion)—which, amazingly, is more than 100 percent of the country’s entire gross domestic product (GDP). Holdings, in fact, are larger than the combined economies of India, Turkey, Argentina, Indonesia and South Africa. In the past, I’ve discussed the economic and financial risks when central banks unwind their balance sheets. The Fed has reduced its assets six times before now, and all but one of those times ended in recession, according to research firm MKM Partners.

We can now add the ECB and, at some point, the BOJ to this list. The three top central banks control approximately $14 trillion in assets, a mind-boggling sum, and it’s unclear at this point what the ramifications might be once these assets are allowed to roll over.

In addition, the Treasury Department revealed this week that the U.S. posted its widest budget deficit in the nation’s history for the month of November, as spending was double the amount of revenue the government brought in. The budget shortfall, then, came in at a record $205 billion, almost 50 percent over the spending gap from a year ago.

This follows news that U.S. government debt is on pace to expand this year at its fastest pace since 2012. Total public debt has jumped by $1.36 trillion, or 6.6 percent, since the start of 2018, making it the biggest expansion in percentage terms since the last year of President Barack Obama’s first term, Bloomberg reports.

As of this Monday, the national debt stood at just under $22 trillion, and by as soon as 2022, it could top $25 trillion, according to estimates. As I shared with you in November, the government could very well be in a “debt spiral” right now, in the words of Black Swan author Nassim Taleb. This means it must borrow to repay its creditors. And with rates on the rise, servicing all this debt will continue to get more and more expensive.

It’s for this reason, among others, that I recommend a 10 percent weighting in gold, with 5 percent in bullion and gold jewelry, the other 5 percent in high-quality gold stocks, mutual funds and ETFs.

Will There Be a Santa Claus Rally?

There are only a few more trading days left to 2018. Will we see a Santa Claus rally? This week I had the opportunity to speak with CNBC Asia’s Akiko Fujita on this very topic. To watch the interview and hear my thoughts, click here! The Rule of Law

If you’ve ever taken a tour of any government buildings in Washington, D.C., as I did last week, you may have noticed the prevalent depictions of Moses. The ancient biblical prophet can be seen on the east wall of the Supreme Court, above the gallery doors of the House Chamber, above American artist Rembrandt Peale’s portrait of President George Washington and elsewhere. But why?

To answer that, it might help to remember that Moses is often recognized as the first lawgiver. After he frees the Hebrews and leads them out of Egypt, Moses ascends Mount Sinai to receive the 10 Commandments, a set of principles that many today believe serves as the basis for Western law.

Not everyone agrees with this, of course.

We should all agree, however, that the United States is an exceptional country for a whole host of reasons, one of them being the concept of the rule of law.

The rule of law guarantees that every American is subject to the same sets of precepts, and that no one is above the law, regardless of race, background, religion or politics. It helps give us peace of mind that we won’t be targeted by law enforcement arbitrarily or incarcerated without due process.

The rule of law is also essential to secure a healthy, vibrant economy as well as capital markets. Without property rights and a strong judicial system, uncertainty and instability would prevail, and markets wouldn’t function nearly as efficiently.

Whether or not there’s historical proof that Moses had any influence on the Framers of the Constitution, his repeated likeness in Washington is a reminder that ours is a nation of laws.