An Educated Look At Student Debt

My family was ahead of its time in being mindful about the affordability of college. My high school grades were good, and there was no discussion as to whether college was right for me, but our budget for tuition was limited. We had the benefit of living near an urban center, with many universities within commuting distance. I applied to a short list of nearby schools and selected the one that granted the best scholarship support. The financial frame simplified the decision and allowed me to graduate debt-free.

Most collegians do not have the same good fortune. The student debt burden in the U.S. now totals over $1.5 trillion, with over 40 million borrowers carrying a balance. The average loan amount has nearly doubled from $17,800 per individual in 2006 to $34,900 today, according to TransUnion. A quarter of all loans are in delinquency, forbearance, or deferment. Everyone involved in the higher education market: universities, students, parents, employers, and the American government must play a role in addressing this issue. The nation's collective education is at stake.

Schooling is still, in general, a very useful thing. The return on investment in education is positive, granting access to a wider assortment of better-paying jobs. The median lifetime earnings of a holder of a bachelor degree are nearly a million dollars higher than the earnings of a high school graduate. In a knowledge economy, the accumulation of human capital is critical to success.

But higher education has gotten very, very expensive. Increasing demand and stable supply have put the pace of inflation in higher education well above that of general inflation for decades. And a concurrent rise in the popularity of graduate degrees, which usually charge higher tuition rates, has pushed total debt balances ever higher. 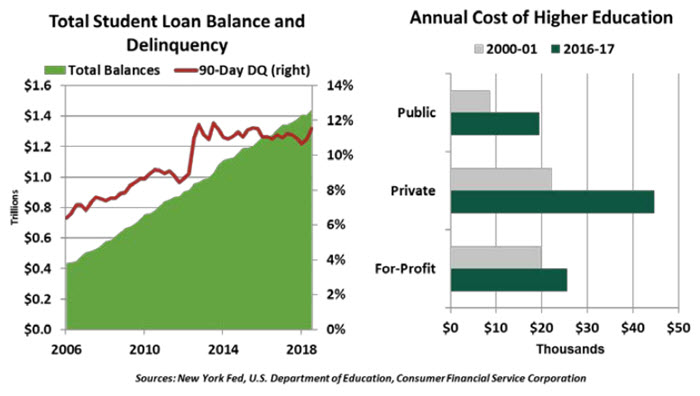 Student loans are not like other consumer obligations. Over 90% of student debt is issued by the U.S. Department of Education. The credit decision and interest rates on student loans are not based on the applicant's credit risk. Loans are available to nearly any student enrolled in a degree program. The government's role makes some sense, as education is, in many senses, a public good. But it also means taxpayers are on the hook if student loans go unpaid.

Defaulted loans are treated differently, as well. Unlike home mortgages and auto loans, the education underpinning a student loan is not collateral that can be repossessed. To mitigate the moral hazard of default, student loans cannot be expunged in bankruptcy and will remain on the consumer's credit file as long as a balance remains unpaid. (As shown below, a surprising number of people over the age of 40 still owe student debt.) As of September 2018, 11.5% of student loan balances are at least 90 days delinquent, continuing a rising trend. 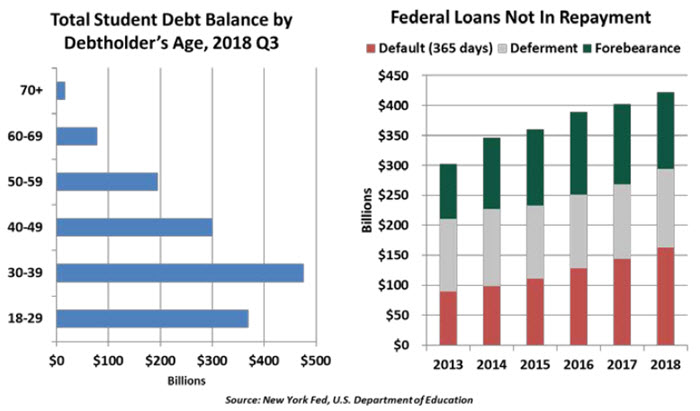 Struggling graduates have alternatives to falling into default. In the six months following the student's graduation, the loan enters a grace period in which no payments are due. Deferment is available to payers who return to school, enter military service or experience a temporary economic hardship such as a job loss. Servicers may also grant forbearance in the event of financial hardships, but often on less generous terms than deferment.

Workers with modest incomes can also benefit from income-based repayment (IBR). 7.4 million federal direct loan borrowers are on an IBR plan, on which the borrower's payment is limited to a fraction of disposable income (10%-20%, depending on the loan and program). After 20-25 years of IBR payments, any remaining balance is forgiven. In addition, students who make a career in public service may qualify for loan forgiveness after ten years of on-time, income-based payments.

Eligibility requirements for IBR are stringent and require borrowers to apply and manage their eligibility, but the reduction is worthwhile. Unfortunately, many delinquent borrowers may be unaware of options like IBR; servicers' failure to inform them of their options is the subject of current litigation. This is clearly an area that deserves additional emphasis.

Deferment, forbearance and IBR are all great resources, but default remains a common outcome. Each year since 2015, over a million borrowers have entered default for the first time. The consequences of falling behind can be lasting. Lingering loan obligations lead students to defer retirement savings, home buying and starting families.

Student loans make it difficult to qualify for other types of credit; Fannie Mae and Freddie Mac require mortgage applicants to have a debt-to-income ratio below 43%. A graduate earning $50,000 and making payments over 10 years on $35,000 in student loans will enter the calculation with a 10% debt-to-income ratio, leaving less room to add a major payment like a mortgage.

The overall returns to higher education still appear positive. Incomes continue to rise, especially for educated workers. The country continues to innovate across disciplines. Higher-paying jobs have a multiplier effect in which higher earners support the economy through greater spending, home purchases and raising children.

The returns from these successes should provide opportunities to deal sensibly and compassionately with those students whose careers may not progress as quickly. To do otherwise risks exacerbating the level of inequality in the U.S. The higher education system is benefitting those who participate and leaving behind those who do not.

The rise and relative downfall of for-profit colleges was a missed opportunity to expand the supply of education. Their premise was well-intentioned: offering skills-focused classes to students who didn't attend traditional universities, and offering a way for mid-career professionals to retrain themselves. However, the performance of for-profit institutions has been dubious. Many enrollees accrued student loan debt but found themselves with degrees that did not lead to improved employment. This has been a disappointment, and policy makers should give thought to whether student loans should remain available to finance enrollment in underperforming programs.

Other countries offer alternatives to our higher education funding model. Some offer public funding of higher education to all residents; others automatically start IBR once loans enter repayment. Germany hosts technical and trade schools as developed and respected as their universities; trade school graduates are well-equipped for careers with a lesser investment of time and money. These international examples are worthy of study.

Rather than fostering a trade school network or investing in on-the-job training, U.S. employers have prioritized university degrees. A four-year bachelor's degree does have value; aside from the specific lessons learned in coursework, it signals to an employer that a candidate can commit to a long-term course of study, perform research and communicate ideas. Employers are likely placing too much value in that degree as a proxy for a candidate's future performance, hiring graduates into roles that do not require a degree. Research by the Federal Reserve Bank of New York found that consistently one-third of college graduates are underemployed, defined as taking a role in which a majority of workers do not need a degree.

Placing all our education early in our lives creates a risk of stagnation. Professional workers can expect to study into their early 20s and then work for roughly the next fifty years until being able to afford to retire. As we progress through our careers, the skills we learned in school lose relevance. Many workers will find they need retraining in order to remain in demand. Temporarily leaving the workforce to obtain more education is an expensive proposition, out of reach for most workers with families to support. A more flexible system, with greater opportunities for continuing education and mid-career training, would help our labor market function more efficiently. Any public cost for retraining is certainly preferable to unemployment, welfare, and in extreme cases, incarceration.

Some have proposed curtailing loans for students who pursue certain courses of study that may introduce a higher risk of default. But with the economic landscape changing quickly, degrees that seemed to guarantee lifetime employment may not deliver on that promise. Students today have to be agile problem solvers, and data suggest that a broad course of study is the best way to achieve that goal.

Larger-scale proposals like the Beyond Tuition campaign are useful to set a vision for alternative models. New allocations for public spending to subsidize college will be difficult in the current fiscal climate, though they could be sold as simply reallocating the write-offs from defaulted student loans and discounts from IBR. Funding can come in the form of partnerships between employers who need educated workers and universities who use their substantial endowments to attract more students (a preferable use of capital than paying the new excise tax on endowments).

To be sure, student debt is also a product of the difficulty many have in saving. 529 plans allow for tax-free income growth and some can earn state tax deductions for contributors. But the adoption of 529 plans has been slow, with only 2.5% of households carrying them. It is never too early or too late to start saving, and every dollar helps.

Students can also reduce their costs by starting their education at community college, saving up to two years of tuition and allowing time to gain certainty of a course of study. Military service before college (using the GI Bill) or after (with ROTC) will offset much of the cost of tuition and give students valuable experience outside the classroom, though it is not without its risks. And applicants should not be dissuaded by high list prices for tuition; 88% of private school students receive some form of financial support to lower the price paid. As endowments rise, universities have more capacity to support their own students.

The returns to education are still positive for most students, but the funding aspect of higher education is broken. Tuition today is far beyond the budgets of most students, requiring loans that cause students to start their working lives with a burden. Going to college has become a wager on future employment and income; though it usually pays, there is no need for it to be such a big gamble.

The government's involvement in the market is an untapped source of influence. Viewed as a nationwide portfolio held by taxpayers, the student debt investment has had good returns. Aside from earned interest, student loans will help launch the careers of highly productive future members of our society. As the financier of this system, the government has tremendous leverage. It can be a force for positive change.

In limited cases, we have already seen federal intervention to discharge loans that funded poor-quality education. Simple reforms like mandating IBR enrollment or requiring greater allocation of university endowments into scholarships would be easy wins; broader reforms, like free college, may be more politically and fiscally challenging but will resonate with a growing audience.

In the current political environment, unfortunately, we do not anticipate any rapid or dramatic reform to college funding. The system will not change until students decide en masse that education is not worth the cost, a trend that has not yet taken shape. The need for an educated workforce is as high as ever. The rewards, and the risks, are high.

Meanwhile, all participants – students, parents, educators and employers – should consider how to lighten the burden of education costs. Personally, I have no regrets about my decision to commute as an undergraduate. Staying home paid an immediate and lasting dividend. But that decision was made twenty years ago; at today's prices, debt may have been unavoidable, and my time living with my parents may have been prolonged well beyond my university days. That is an outcome I am glad I did not have to contemplate.