This year’s Veteran’s Day/Remembrance Day observance was especially poignant, as it marked the 100th anniversary of the armistice that ended World War I. The occasion prompted a number of historical remembrances, one of the best of which can be found here. While the 1918 armistice ended the hostilities, it sowed the seeds for a new round of antipathy that brought the world back to war just twenty years later.

The post-WWI period was politically volatile in a number of countries. Coalitions that had formed behind the common cause began to fracture after the fighting ended. Woodrow Wilson’s vision for a League of Nations ran onto the rocks of Republican gains in Congress. In the United Kingdom, the Prime Ministry of David Lloyd George crumbled amid the kind of behind-the-scenes plotting that is spectator sport for those in Britain.

Those members of parliament (MPs) outside party leadership struggled to have their voices heard during that interval, so a group of Tories formed the Conservative Private Members’ Committee, informally known as the “1922 Committee,” to push back against the established order. Nearly a century later, the 1922 Committee is front and center as the United Kingdom wrestles with Brexit; the group is responsible for collecting letters expressing doubt about Prime Minister Theresa May. Should Ms. May fail to survive a no confidence vote, a messy process would become even messier. But there is reason to think that British politics and the British economy will avoid the worst.

The events of last week, while dramatic, were not a surprise to many who have followed Brexit at close range. The 2016 referendum passed by a margin of 52% to 48% with only 72% of voters casting ballots. The divisions within the U.K. were deep at that time, and have remained so. This makes negotiating Brexit terms difficult; for more than two years, Britain has struggled to reach consensus on what it wants from the process. 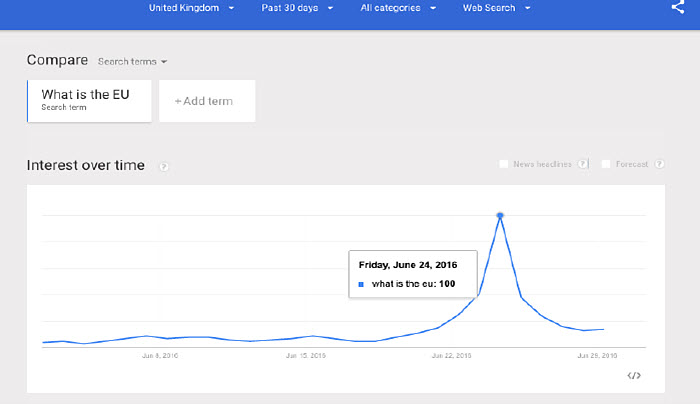 It seemed clear that those who voted to leave had only a modest understanding of how difficult divorce would be. Google searches for details on the EU spiked immediately after the referendum. The collective understanding of what Brexit would mean for the Irish border was almost certainly incomplete; this issue has become one of the most difficult for negotiators to solve.

The formal process of separation was initiated in March 2017 with the delivery of a letter from Prime Minister May to the president of the European Commission. Some thought the U.K. should have waited a bit longer to get started, as negotiating points had yet to be established. The EU, by contrast, was well-organized behind the governing principles that its members have adopted over time.

The EU has a history of solving complicated and pressing problems at the last minute. At several points during the European sovereign debt crisis of 2010, a member country appeared to be at imminent risk of failure; rescue programs were only finalized at the 11th minute of the 11th hour. So while the lack of progress in negotiations has been
frustrating, it isn’t altogether unexpected.

Some predicted economic collapse for the U.K. before and after the referendum. But the British economy has continued to expand during the past two years, and U.K. unemployment has fallen to a 43-year low. And the trade-weighted value of the British pound, which has been a bellwether of Brexit anxiety, is worth only 9% less than it was at the beginning of 2016. Interestingly, global and local financial markets scarcely registered concern late last week when officials resigned from the British cabinet, suggesting a focus on the fundamentals and not the theater. 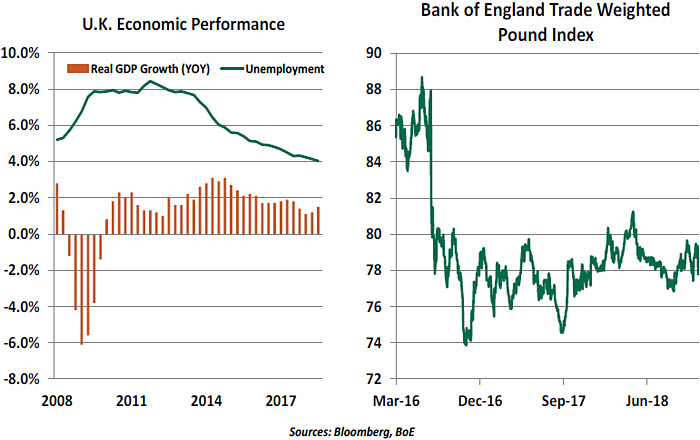 The plan agreed earlier this month between London and Brussels appears to be a big kick of the can down the road, which would preserve a lot of the status quo. The United Kingdom would remain in a transitional customs union with the EU for the foreseeable future, ostensibly to allow time for negotiators to come up with more specific solutions to the thorniest issues.

The financial services sector, an area of strength for the British economy and a substantial source of exports, would be pleased by this outcome. U.K. banks are currently allowed to service EU clients using a “passporting” arrangement that will come under question after Brexit. If the current fluidity cannot be sustained, London may lose some of its luster as Europe’s financial capital. This situation is among the biggest complications for the “Canada-style” arrangement that some have proposed as a model for resolving Brexit.

But those who supported departure can be forgiven for feeling aggrieved. The transition would have the U.K. abide by EU rules without any say in setting them. Membership fees would still be payable, and ultimate exit could only occur with EU approval. The U.K. would be delayed in negotiating free trade agreements with other countries; there are dozens that will need to be re-struck after separation. And the uncertainty over the ultimate terms will continue to risk losses of talent and corporate mass. British equity markets, which have underperformed over the past two years, could continue to struggle. 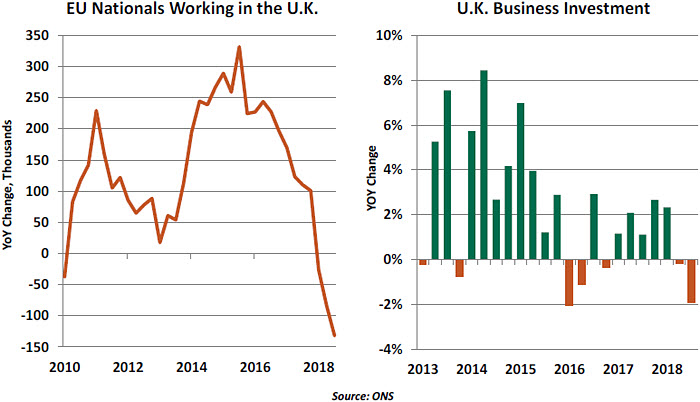 Prime Minister May has countered by saying the choice was between “this deal and no deal.” The latter alternative, an abrupt end to the relationship between the U.K. and the EU, would be the most chaotic. (Our analysis of that outcome can be found here.) Some hard-core Brexit supporters would welcome a clean break, suggesting that setbacks would be temporary and an improved steady state would be reached sooner. But the immediate shock to businesses could be severe.

Some commentators have described the Tory party as “an autocracy tempered by assassination.” One reason members have been reluctant to take aim at Prime Minister May is that no one has much desire to replace her. She entered the role at a terribly difficult time, and it is not clear a new leader would do all that much better.

In addition, there is concern that Ms. May’s resignation could pave the way to new general elections in the U.K., which might be the worst outcome from a market and economic perspective. The new campaign would create a pause in negotiations with the EU at an especially critical time, and there is every chance that the opposition Labour Party could win the day. Its leader, Jeremy Corbyn, has been described as an unreconstructed socialist who would seek to raise taxes, re-nationalize industry and tighten regulations. This may be enough to keep the Tories from turning on their leader.

As of this writing, Ms. May seems to have solidified her cabinet and has set about trying to solidify support for the draft agreement in Parliament. The vote is expected sometime in mid-December. The road to passage will be difficult; those counting carefully find little reason to think a majority of MPs will support the agreement. But in the intervening weeks, proponents will argue that failure would be even more disagreeable. While a multitude of audiences seem to dislike the May plan, they are deeply divided on what should replace it. And that may represent its best chance of passage.

During the weeks until the vote, one can only imagine the backroom discussions that will take place at Westminster and the clubby establishments that surround it. The rooms are not smoke-filled, as they were in 1922. But before long, the United Kingdom will need to clear the air.

For years, inflation of prescription drug prices has consistently outpaced general inflation. The costs are borne largely by those who take prescriptions, often to treat chronic conditions. These patients are often sensitive to changes in price or insurance coverage for these specific drugs. The consequences of higher prices can be lethal.

The balance of high drug costs is paid by all Americans through the costs of private and public insurance. Medicare is, by far, the largest consumer of pharmaceuticals, laying out over $99 billion annually. As America ages, these public costs are expected to grow substantially.

Developing drugs is a costly undertaking. The U.S. Food and Drug Administration (FDA) requires multi-year studies to ensure the efficacy and safety of any new drug, starting only after a manufacturer has invested years into research and development. Any new drug must be priced to recover those costs and fund future research. New drugs gain
20 years of patent protection, in which the manufacturer earns monopoly profits. The market thus rewards gambling on the development of either blockbuster drugs with broad appeal or niche drugs to treat less common diseases for which buyers have little price sensitivity.

By contrast, many other countries keep drug prices in check. In single-payer systems, governments demand lower prices directly from manufacturers. Patent protections are less stringent, allowing competition from generic versions of drugs sooner than they are allowed in the U.S. In effect, U.S. consumers pay for the research that benefits the worldwide population.

The difference in prices among countries is therefore stark, leading to one proposed solution to limit costs: Re-importation of drugs from abroad. Why should consumers pay high prices in the U.S. when the same medicine is less expensive elsewhere? Re-importation is illegal, but appears to be a vibrant gray market.

If smuggling seems too extreme, we can lower prices in more conventional manners. Larger employers are joining forces to negotiate lower prices by forming entities such as the Health Transformation Alliance. The largest healthcare payer is the U.S. government, predominantly through Medicare, the health plan covering more than 59 million older Americans. Currently, prescription drugs are managed through Medicare Part D, which relies on a network of insurers and prohibits the Medicare system from negotiating pharmaceutical prices directly. This artificial barrier has stymied Medicare’s ability to control drug price inflation.

Patent protection for new drugs is also worthy of reconsideration. The twenty-year standard is universal to patent law, but could be shortened for life-saving medicines. In addition, patent holders aggressively defend their intellectual property against similar medicines. In “pay for delay” settlements, patent holders pay generic formulators to not bring competing drugs to market, preserving a monopoly position and reducing market
efficiency. These arrangements could be outlawed by Congress.

Policymakers are aware of international price differentials. In October, the Trump administration proposed using an international price index to limit the Medicare prices of medicines delivered in physicians’ offices, which are priced even less competitively than prescription drugs. This model would be disruptive if extended to the retail pharmaceutical market.

Prescription drugs are essential goods, and lower prices would satisfy voters. This would seem to be a slam-dunk political issue. But that impression overlooks the power of the healthcare lobby. Pharmaceutical companies are performing well under the current system and could only lose from interventions. Most pro-business politicians will not support any form of price controls. And more broadly, the current system supports innovation; new, safe treatments are available for rare conditions that would not be economically feasible in a controlled market.

This Thanksgiving, we are thankful for safe medications used to treat countless conditions, and for our ability to pay for them. We hold out hope that medicines remain available to all who need them.