Undergraduates may describe their midterm exams as the second-most important examinations in many courses. Administered halfway through the semester, these tests are central to both teacher and student as a check on progress. This week’s midterm elections in the U.S. served a similar role, allowing voters to express their opinions of the country’s progress halfway through the president’s term. The verdict was something of a stalemate.

The change in control has precedent: past midterm elections have often been unfavorable to the president’s party. The economy often makes the difference in voter sentiment, but not this time. U.S. economic circumstances could scarcely be better: low unemployment, an elevated stock market and real gross domestic product (GDP) growth of more than 3%. Trade tensions also made little difference in the balloting; some states that have been most heavily affected by tariffs still supported Republicans.

Administrations have an easier time advancing their agendas when the president and majorities of both chambers of Congress are from the same party, an advantage Republicans have enjoyed since January 2017. Key legislation passed in the interim, such as the Tax Cuts and Jobs Act (TCJA), won narrowly on party-line votes. The path to progress will become more difficult in a divided Congress, and many analysts are expecting renewed gridlock.

With opinions likely to differ between the houses of the new Congress, current tax and spending policies will likely remain in force. This bodes poorly for the nation’s fiscal outlook. Despite strong growth and exceptional corporate profits, government receipts were flat in the last fiscal year, thanks to tax reform. Additional room for spending was granted as part of last spring’s bipartisan budget deal; the extra allowance is due to expire after two years, but many expect it to be extended. The Federal deficit may reach $1 trillion next year.

Looking ahead, we are braced for repeated fights over government funding. In past divided governments, every budget negotiation provided an opportunity for the opposition party to push its agenda. In the current situation, each side will be looking to score points in advance of the 2020 presidential election.

These fights will come soon. The Bipartisan Budget Act of 2018 suspended the debt limit (the legislated cap on the amount of debt that can be incurred by the U.S. Treasury) only through March 1, 2019. Absent a resolution to raise the limit, the Treasury will have to undertake extraordinary measures to keep paying the bills, but these will not last long. A prolonged dispute would impair the Treasury’s ability to make interest payments, risking a debt downgrade. Given the degree of U.S. indebtedness, any impairment to the country’s creditworthiness will be costly.

After the debt ceiling, Congress will need to create a budget. Under a unified government, President Trump threatened to veto the budget for lack of funding for his preferred initiatives; he will find less to like in a budget with bipartisan compromises. Last spring, the White House struck a deal with minority leadership; we hope this sets a precedent for 2019 negotiations. 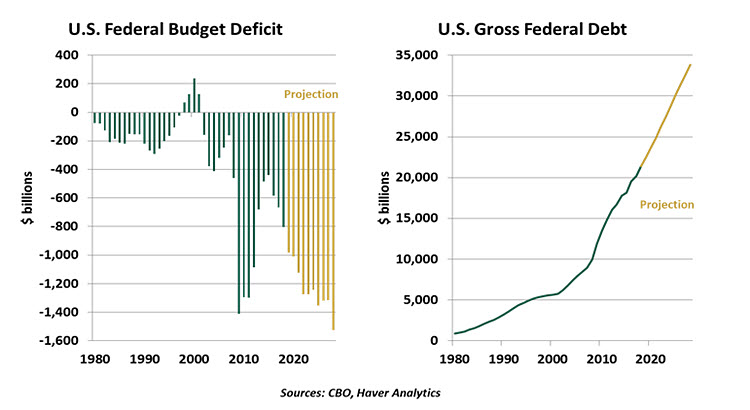 There is some unfinished business in the trade arena. The U.S.-Mexico-Canada Agreement (USMCA), the proposed successor to NAFTA, remains an agreement in principle. Due to its mandatory review period, it cannot be passed until the next legislative session. Newly elected Democrats may withhold their support for USMCA, forcing a new round of negotiations. Though there is much to like about USMCA, it may be collateral damage in a partisan fight.

The divided government is unlikely to affect negotiations with China. There has been consensus across parties that China’s trade practices were due for discussion. Democrats, who have traditionally been more skeptical about free trade, are unlikely to express concern about the conduct of these conversations.

While stalemates, standoffs and shutdowns comprise the Nash equilibrium of divided government, there may be consensus to be found. As an example, both Democrats and Republicans have expressed interest in infrastructure investment. America’s existing road, rail and air networks are in need of substantial capital to remain in good operating condition; though failures are rare, they are dramatic and deadly. Advocates and lobbyists will press their cases for enhancing commuter rail networks, transitioning to renewable energy and expanding rural broadband. Willing negotiators might find points of agreement in this array of options.

The two parties might also find common ground in the effort to contain medical costs, with prescription drug prices an early focus. There are also those who think compromise is possible on immigration, as bipartisan reform was almost reached under the administrations of George W. Bush and Barack Obama. Given the country’s aging demographics, this would be positive for the economy.

Overall, the election affirms the course we had anticipated for the U.S. Economic growth in 2018 has been outsized, driven by an export surge in advance of tariffs as well as tax reform that augmented consumers’ paychecks and incented business investment. We have forecasted a slower 2019 as the costs of trade actions become apparent and the temporary boost from tax reform fades. The chances for further tax cuts have diminished.

In general, we suspect rhetoric will exceed action by some margin over the next two years. The next election will be the final examination for the current administration, and the decisions taken (or not taken) by Congress could make the difference between passage and failure.

Last month, the European Commission (EC) formally rejected Italy’s draft budget for 2019. The action, while not unexpected, was the first of its kind since the Maastricht Treaty governing eurozone finances was signed in 1992. The Italian plan was labeled as an “unprecedented” violation of European Union (EU) fiscal rules. A showdown now looms, and it will be closely watched across the continent.

The draft budget envisaged a fiscal deficit equal to 2.4% of gross domestic product (GDP) in 2019, three times higher than the previous government’s target of 0.8%. The plan includes the introduction of universal basic income of up to €780 a month for unemployed nationals, lowering the retirement age, a partial amnesty on unpaid taxes and a tax cut for the self-employed. To those in northern Europe, these measures seem like an expansion of the welfare state, not reform.

A formal assessment by the EC due on November 21 will likely be negative, paving the way for the activation of an excessive deficit procedure (EDP) against Rome. The EDP entails several steps that could culminate in the imposition of a fine of up to 0.5% of GDP. Other punitive measures could include an end to the financing of Italian projects by the European Investment Bank. These severe measures have never been applied against a member state.

Italy has a debt problem. Public debt totals 131% of GDP, the second-largest debt ratio in the region behind Greece. But Italy is not Greece; Italy has much better balance in its trade and fiscal positions, and has relatively high private sector savings. The new populist government has stated its commitment to the common currency region on multiple occasions. Italian Deputy Prime Minister Luigi Di Maio said recently that “we will tattoo ourselves to explain to the investment community that we do not want to leave the eurozone.” Let’s hope that won’t be necessary.

The investment community, however, is not completely reassured. The EU essentially wants the region’s third-largest economy to adopt a more austere budget. However, austerity measures across Europe have not only contributed to a rise in anti-EU sentiment, but have caused economic pain. The rescue program implemented for Greece helped to reduce some imbalances, but it mired the economy in a recession that was accompanied by high unemployment, weak consumer spending and reduced capital for lending.

Tensions have started to spill over into the market for Italian bonds, which have slumped since August when the news of the budget plans came into the public domain. Moody’s lowered Italy’s sovereign rating to one notch above junk status, while the S&P lowered its outlook to “negative.” Higher borrowing at elevated costs will only make the debt more untenable; another rating reduction would complicate the ability of the European Central Bank (ECB) to purchase Italian debt under its quantitative easing program.

Should Italy fall into a financial crisis, bailing it out will not be easy. A substantial amount of Italian debt (€650 billion) will need to be refinanced over the coming three years. This will likely exceed the European Stability Mechanism’s capacity, forcing Italy towards debt restructuring. Some EU finance ministers want any unsustainable public debt in the region to undergo restructuring in any event, with losses imposed on the private sector before a public bailout is organized. Since Italian bonds are widely held by Italian banks and Italian investors, this would be an especially painful solution, and one with significant political repercussions.

Whether through negotiation or capitulation to market pressure, we ultimately expect Rome to play ball. The potential costs from a market stress or a forced debt restructuring will be far greater than those from drawing up a more sensible budget.

They Know How To Live

I rarely drink alcohol while traveling internationally. Managing jet lag is not easy, and imbibing is usually counterproductive.

But shortly before departing Australia last week, I shared lunch with friends at Yering Station, a gorgeous winery in the Yarra River Valley northeast of Melbourne. W"hen the waiter approached with the house white, I demurred. My host overruled me. “Carpe diem,” he said.

Australians and New Zealanders do live well. They are blessed with beautiful terrain, which they manage very carefully. Their economies have performed exceptionally well, thanks to a blend of services and commodities that are demanded by China, the commonwealth and the United States. Both countries have benefitted from immigration, which has contributed to economic vitality. And both have planned ahead for retirement and environmental change, whereas other countries have been more short-sighted.

Nonetheless, I sensed anxiety among the many groups I spoke with during the nearly two-week visit. The two countries find themselves in the middle of the China-U.S. trade dispute, with both sides pressing for allegiance. They’ve both had a bit of political volatility; Australia will likely have its 7th prime minister in twelve years next spring. (Some are referring to Oz as the world’s “coup capital.”) And both countries have experienced substantial increases in property prices and household debt, which are not seen as sustainable.

Thanks to additional restrictions, the housing markets in Australia and New Zealand have cooled a bit. But it is difficult to take just a little air out of a bubble.

Investors in that part of the world share the international anxiety over whether the global expansion and the bull market which has accompanied it can be sustained. Nonetheless, I offered that their worries, overall, are mild compared to those experienced in a number of other countries. Rather than fret, Australians and New Zealanders might do well to take a carpe diem attitude themselves. To get into the mood, I can recommend a nice chardonnay from the land of the Dandenongs.