The Next Five Years

We’re going through a medium-range strategic planning process here at the bank. In support of that effort, I was asked to project a broad range of global variables, with perfect precision, through 2024. No pressure.

Forecasting over short intervals is hazardous; forecasting over long horizons is folly. But I can predict with some certainty that the following themes will have a significant influence on economic outcomes in the years ahead.

As a number of countries become more nationalistic, globalization is on the run. Protectionist measures are rising, and support for international cooperatives like the International Monetary Fund, the World Trade Organization and the European Union has dwindled.

Any reversal of the gains derived from globalization could threaten economic growth and market progress. And without sufficient support, the organizations charged with keeping the international peace (social and economic) cannot fulfill their missions.

Ten years ago, we saw the downside of international linkages. Financial trouble that originated in the United States spread further and more widely than anyone anticipated. The resulting global downturn led individual countries to view economic relationships with other nations less favorably, and to take steps to protect themselves. 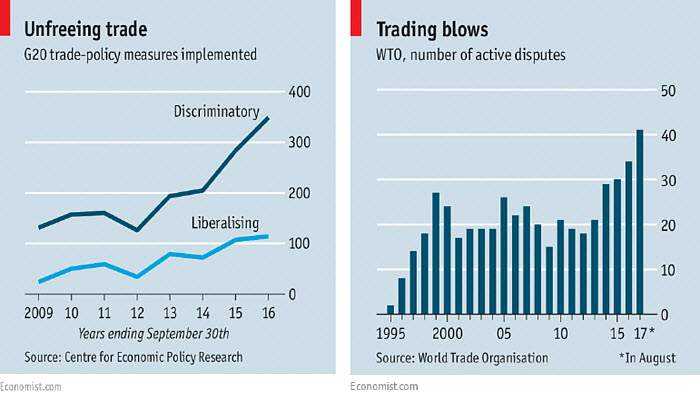 Adding fuel to this trend has been an uneven recovery. While overall growth and market performance has been impressive, some countries (and communities within countries) have not prospered. Growing income inequality has provided fertile ground for populism and the nationalist candidates that feed on it. The political middle has not been able to hold, and leaders who defended globalization have been pushed aside.

Economic Pangea has continued in spite of the cautionary tale provided by Brexit. Two years ago, many U.K. voters may not have appreciated how difficult divorce from the EU would be. But public opinion is visceral, and opportunistic politicians chose to inflame anti-EU passions. In the process, facts supporting trade have been trampled.

On a reassuring note, efforts on the part of the United States to re-set terms of trade have been more bark than bite. In the past six months, relative détente has been reached with South Korea, Japan, the European Union (EU), Canada and Mexico. To date, changes have been evolutionary and not revolutionary, as we described in our analysis of the United States-Mexico-Canada Agreement (USMCA).

But a key feature of the USMCA is a clause that threatens consequences for any trade negotiation with China, which seems to have been the primary target of Washington’s antipathy all along. The preliminaries are now over, and the main event is at hand. The relationship between Beijing and Washington has chilled, and correspondents are being forced to take sides.

In pursuing a policy of home country first, nations are choosing to ask forgiveness rather than permission. International agencies set up to adjudicate international commerce may not be able to enforce treaties. Unless and until policy makers address the concerns of those who feel disenfranchised and disaffected, globalization will be at risk.

Economic and market cycles have typically encountered natural limitations that bound performance. Some think developed markets have arrived at a point where growth can continue, or even accelerate, without kindling inflation. If this is the case, central banks will have to embrace the change of paradigm and calibrate their policies accordingly. And if the old paradigm still applies, inflation and interest rates may rise more rapidly than anticipated.

Instead, Greenspan counseled patience. He sensed the emergence of a new paradigm in which the economy could grow more rapidly without stress. At that time, the opening of global markets was expanding aggregate demand and supply, rendering local constraints less binding. The Fed left rates alone, and growth was sustained without inflation.

Some believe we are witnessing the onset of another new paradigm. Inflation has been quiescent in most world markets, in spite of growth that has exceeded traditional speed limits. This suggests that concepts like full employment and potential rates of economic growth need to be re-evaluated. (Our thoughts on this front can be found in our essay “The Fed Reaches for the Stars.”)

Secular forces are providing strong resistance to inflation. E-commerce has placed consumers in a much better position to research and purchase goods and services. Automation, analytics and artificial intelligence are allowing firms to sustain margins even in the absence of pricing power. Many think these trends are in the early innings.

Others note that the laws of supply and demand have not been completely repealed. As the expansion continues to absorb available resources, the possibility of higher inflation must certainly rise. Inflation is, in fact, higher than it was a year ago.

The Federal Reserve has been increasing rates for three years now, and has been reducing its balance sheet since the summer of 2017. The current question is: how far should it go? Tightening too much could hinder growth and damage emerging markets, but leaving rates too low for too long risks the formation of financial excess. 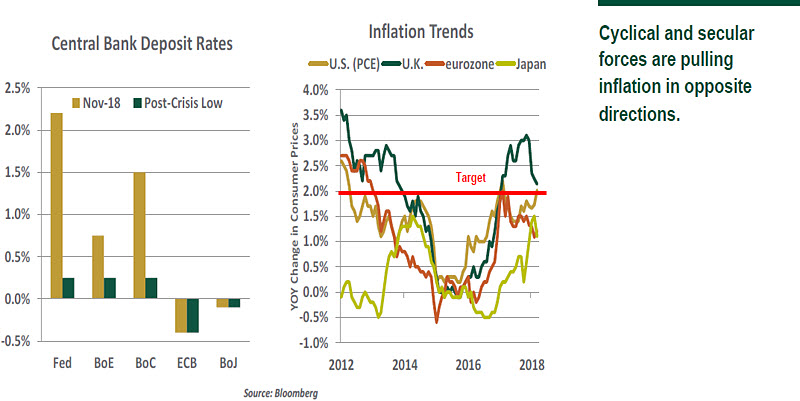 Trying to find a neutral position amid all of these opposing forces will not be at all easy for central banks, and the political pressure surrounding them is likely to increase.

3. Demographic Dilemma Major economies are experiencing a retirement wave that will limit labor force growth and place additional burdens on retirement and medical systems. At the same time, global attitudes toward immigration have become more cautious. This combination may make it difficult for societies to meet their generational obligations, potentially resulting in a loss of economic vitality.

The advance of technology offers a potential solution to demographic challenges, but may lead to worker displacement in the near term. Discontent within the affected communities could perpetuate the kind of political instability that has become more common across the globe.

During the coming decade, populations in many of the world’s largest economies will be aging. In most cases, this will be due to postwar generations closing their careers; in China’s case, the root cause is the one-child policy, which was in place for more than thirty years. Slow labor force growth limits the capacity of an economy to grow, and the retirement wave will bring unfunded pension liabilities from the shadows into the light. And since an alarming fraction of the population in several countries is financially ill-prepared for retirement, rates of consumption may fall and political unrest may rise in the years ahead.

A number of emerging markets have the opposite problem: a surplus of young people. Without the requisite capital and infrastructure, however, many of them will be frustrated at their lack of opportunity. This, too, has the potential to create political instability. The international population mismatch can be solved with global sourcing and well-designed immigration, but both of those concepts are losing favor at the moment.

Countries seeking to offset population problems are hoping for additional productivity gains. The race for world leadership in technology has been joined, and the winner will find itself with a much brighter long-term economic outlook. But broad changes in the structure of work can raise anxieties if the transition is not carefully managed.

In developed markets, ratios of national debt to national income are roughly double the levels of a decade ago. Several emerging markets have a dangerous combination of high debt levels and dollar dependency. To a certain degree, the shift from private sector to public sector borrowing has been a natural byproduct of the financial crisis, but leverage has continued to accumulate rapidly during the long expansion. Competitive tax cuts intended to broaden business bases often fall short of their objectives.

The danger of indebtedness has been masked somewhat by historically low interest rates, but those rates are rising as economic growth proceeds. Investors may eventually ask tough questions about sovereign debt sustainability, and find answers elusive.

Debt hasn’t really been reduced since the financial crisis. It has merely been redistributed. Households and banks have deleveraged, but governments have more than made up the difference. Deficits have been persistent even as economies have grown over the past decade; increasing tax collection is not politically popular.

America may not be the first to feel the pinch of investor concerns about sovereign debt sustainability, as the U.S. dollar remains the undisputed reserve currency for the world. But other nations may find themselves paying much higher interest rates as markets question their ability and willingness to repay. We’ve had a series of brush fires on this front during the past decade, but all were extinguished without broad damage to global markets. But other, larger countries may arrive at the brink in the years ahead.

If they get there, sufficient assistance may not be forthcoming. As we wrote last week, the International Monetary Fund may not have the support or the resources to deal with the range of government debt stress that might arise in the years ahead.

Further, with government debt rising rapidly, taxpayers (and the officials they elect) can be expected to become more animated in their demands for easy money. We’ve already seen several threats against central bank independence around the world; these may become more frequent in the years ahead.

The economist Hyman Minsky famously postulated that long periods of prosperity can breed complacency and lay the seeds of instability. When something arises to threaten the reverie, behavioral and mathematical reactions can be swift and severe. There are a range of risks that could disrupt the market’s progress; policymakers will need to make careful choices to avoid them.

In many ways, the global financial system is in much better condition than it was ten years ago. Bank capital is stronger, and markets are less opaque. Surveillance of markets within and outside of central banks is stronger. These factors should reduce the chance of a sudden shock.

There do not appear to be any global markets that are blatantly offside at the moment. But as time goes on, memories of 2008 will continue to fade and regulations designed to prevent a recurrence will be further eased. And the next crisis will almost certainly not look like the prior one. Guards will need to remain raised to minimize the likelihood of a “Minsky moment.”