What’s the Value of the IMF?

Earlier this month, the International Monetary Fund (IMF) conducted its fall meetings in Bali, Indonesia. The economic outlook released as background for the occasion was titled "Challenges to Steady Growth." The report highlighted "mounting uncertainties—not only over economic policies, but also over the global framework of international relations within which policies are made."

Uncertainty is also mounting around the IMF itself. Rising nationalism around the world has fostered suspicion about the motives and actions of multilateral organizations. Using domestic funds to benefit other countries, or allowing an outside body to dictate domestic policy, runs counter to the broadening desire to put home country first.

The interconnectedness of world markets makes the IMF's work especially important. Without the full support of its sponsors, the Fund will not be able to prevent the next crisis, whenever it arises, from escalating. The resulting economic dysfunction could lead to civilian and military consequences that the postwar order was constructed to avoid.

The IMF was conceived at the historic Bretton Woods meeting in 1944, two months after the war in Europe had ended. There was an abiding belief among those gathered that economic instability invites political instability. During the first half of the twentieth century, this combination had provided fertile ground for the rise of regimes that took up arms against one another. It was felt that if international economic cooperation could be re-established, commercial ties would reduce the risk of renewed aggression. 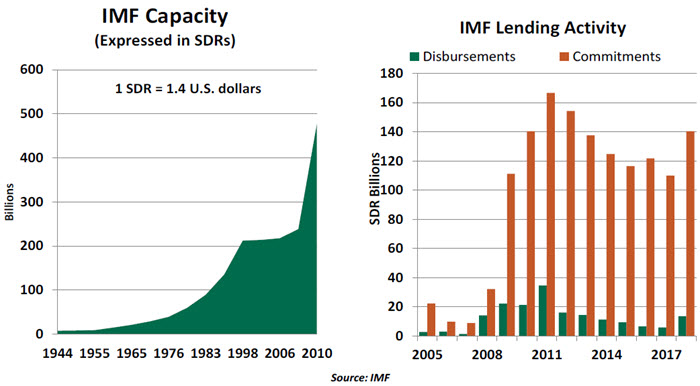 The IMF is chartered to foster economic development and assist troubled countries during periods of duress. It also promotes principles of sound economic management for emerging and developed markets alike. The adoption of these principles is often a condition for the receipt of emergency aid.

Funding for the IMF comes from its 189 members, with allocations based on a complicated formula that considers the member's gross domestic product (GDP), its trade flows and the size of its government reserves. Those resources are denominated in special drawing rights (SDR); the value of an SDR is a weighted composite of the top five world currencies. Today, the IMF can call on total resources of nearly $1 trillion.

The IMF is the lender of last resort to sovereigns. Countries that struggle with their finances are often shut out of international funding markets and experience capital flight that accelerates their decline. By providing monetary support and assurances to markets, the IMF can stabilize situations that threaten to spiral out of control.

A leading recent example of the IMF's engagement was the Greek financial crisis, where the IMF partnered with European authorities to deliver assistance. The Greek situation was especially delicate, given its size, the country's financial condition, and the potential for contagion in the event of a default. Many hail the IMF for heading off a worst case outcome.

But the Fund has its detractors. To return national finances to a sustainable path, debt is restructured and extended. This often requires the owners of that debt to accept losses. And countries receiving IMF assistance are placed under strict budgetary requirements, which can deepen a country's economic hardship in the short term. No matter how even-handedly the IMF tries to structure its assistance, creditors and citizens can emerge displeased.

There has also been tension over the direction of the IMF. A Board of Governors is responsible for broad policy, and voting rights are generally apportioned based on GDP. It has been some time since these allocations have been updated; while China seems to be in line for additional recognition, the United States has expressed discomfort at the prospect of China gaining influence. 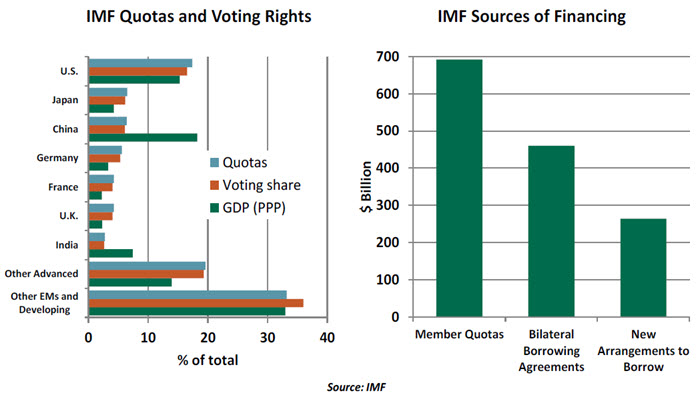 Almost half of the IMF's current resources come from programs that will be expiring in the next three years. Failure to renew those commitments would significantly weaken the Fund's capability. Given the increase in sovereign debt in the last decade, some have argued that the IMF needs more resources, not fewer. Difficult situations are requiring larger commitments, and there are a series of countries that may require assistance in the very near future.

The last request for increased IMF financing took five years to make its way through the U.S. Congress before finally passing in 2016. Given the change in leadership and philosophy in Washington since then, future IMF requests for capital could face an even chillier reception. The number of conditions attached may expand.

Regional alternatives to the IMF have been appearing. The European Financial Stability Facility (EFSF) was established in 2010 to backstop EU members. The EFSF was especially active in the support program for Greece. China has suggested creating a similar facility for Asia over which it would have more direct control. If this trend continues, monies now allocated to the IMF could be redirected to the newcomers.

Regional insurance pools would, however, leave a number of countries around the world without adequate access to relief and with less of a voice in global economic policy making. This would be an unfortunate outcome; emerging markets can export financial problems if not properly managed.

The IMF has been a pillar of the postwar order for more than 70 years. If it is weakened, the risk of financial and diplomatic crisis will rise. The Fund deserves our respect, and our capital.

Too Good To Be True

"Predatory lending involves…engaging in fraud or deception to conceal the true nature of the loan obligation, or ancillary products, from an unsuspecting or unsophisticated borrower."
-- U.S. Federal Deposit Insurance Corporation

China's ambitious Belt and Road Initiative (BRI) is aimed at delivering infrastructure financing to more than 60 countries across Asia, the Middle East, Europe and Africa. In total, its projects would cover around 44% of world's population and 30% of global gross domestic product. The size of the program is expected to range from $1 trillion to $8 trillion.

Since 2014, China has invested around $402 billion in BRI nations, of which 64% was in the form of construction projects. Over the same period, China's also made $146 billion of direct investments in foreign firms and infrastructure assets. The support certainly helps recipient nations, but China also gains better access to markets that might increase consumption of Chinese products.

The BRI was initially met with a positive response as it offered an easy way to initiate important infrastructure projects that otherwise would be unaffordable for small countries. However, since last year, the initiative has come under intense scrutiny owing to concerns over China's real intent. BRI loans have been offered to countries irrespective their fiscal position and governance standards. This has raised fears of a sovereign debt default among smaller, low-income countries.

According to a 2018 study by the Center for Global Development, 23 BRI participants are "at risk of debt distress." Pakistan, with the key China-Pakistan Economic Corridor, is the most vulnerable. China is reportedly financing about 80% of Pakistan's external debt on its own terms, with external repayments projected to rise by 65% to $12.7 billion in 2019. It seems extremely unlikely that Pakistan will be able to meet these obligations, leading it to reach out to the IMF for aid. The U.S., however, has expressed reluctance to have IMF funds make Chinese creditors whole.

Recently, Sri Lanka was forced into debt-for-equity arrangements after the government failed to repay its debts. China took over operations at the $1.5 billion Hambantota Port, which was constructed and financed with China's help. This instance has made countries apprehensive of financial support provided by China, which is now seen as a tool to gain geopolitical influence. 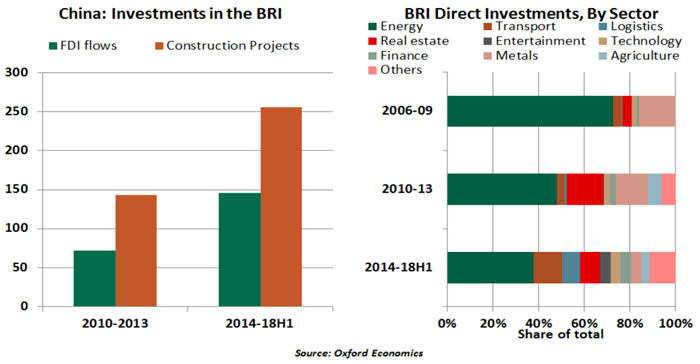 In response to growing concerns about creditor intent, three major road projects were cancelled in Pakistan. The new Malaysian government also halted $22 billion worth of projects, with Prime Minister Mahathir Mohamad warning against a "new version of colonialism." In August, Myanmar scaled back the $7.3 billion China-backed Kyaukpyu deepwater port project to only $1.3 billion, expressing concerns that "it is too expensive and could ultimately fall under Beijing's control if Myanmar were to default on its debt."

Beyond sovereign debt stress and the loss of economic control that the BRI risks, there are concerns related to the safety, quality and environmental standards of the underlying infrastructure investments. U.K. Prime Minister Theresa May listed this as a reason behind her country not formally endorsing the BRI. The non-transparent lending practices of the financial institutions involved have also come under increased scrutiny.

Though China is an observer at meetings of the Club de Paris, it is not a member of it. Hence, there is no obligation for it to disclose information on the way capital is disbursed. In 2011, China had reportedly agreed to write off an unknown amount of debt owed by Tajikistan in exchange for control of disputed territory. If more cases like this were to come to light, the willingness of nations to take BRI financing may diminish.

The BRI is losing its gloss as more countries see the downsides of the program. The generous credit offering seemed too good to be true. Indeed it has been, for all parties except China.

The Fed Put Is Shot

Market volatility is back in focus, with the S&P 500 gaining or losing more than 1% in seven of the last 12 trading days. These swings have left investors nervous about a severe decline and wondering what steps could be taken to stem the negative tide.

One possibility is what has become known as the "Fed put." In the event of a market downturn, the Fed can offer comforting statements or signal an alteration in the course of interest rate policy to settle conditions. In so doing, the Fed places a kind of floor under market corrections, effectively offering a put option to investors.

Alan Greenspan pioneered the Fed put by decreasing the federal funds rate in the aftermath of the Black Monday stock market crash in 1987. The Fed put was also prominent as the global financial crisis took hold, cutting rates to a record-low range of 0.0-0.25% by December 2008. Quantitative easing was intended, in part, to encourage investors to re-risk their portfolios, helping to initiate the bull market that began in 2009.

But should the Fed try to manage the level of equity prices? Its dual mandate is to support employment and contain inflation. Unlike consumer prices, asset prices can be volatile, with crisis one day followed by calm the next. And corrections can be desirable if the market has drifted into excess.

But the position of markets can't be ignored. Following the September meeting of the Federal Open Market Committee, chair Powell was asked what could change the Fed's path of rate hikes. He responded that the Fed would react to "a significant and lasting correction in financial markets or a slowing down in the economy that's inconsistent with our forecast." Poor market performance can reverse wealth effects, invite financial contagion and color economic psychology.

A recent case study provides a cautionary tale. After seven years without a rate action, the Fed raised rates in December 2015 and seemed poised to continue upward from there. But an equity market correction the following month caused it to pause. In the end, there was no global contagion, but it was another a year before the Fed moved rates again. In that instance, the Fed put may have been trotted out prematurely.

Equity markets this year have set multiple record highs, and occasional setbacks should not surprise investors. The Fed cannot, and should not, cushion all corrections.