Ryan reports on the updated trade agreement for North America.

The automotive industry understands the power of branding. The same vehicle can be sold under different names, with only cosmetic differences, yet appeal to different buyers. My parents, shopping for a car in the 1980s, test drove a Chevrolet Celebrity, but ultimately chose the cachet of an Oldsmobile Cutlass Ciera. Years later, mom and dad would learn those two General Motors cars were the same size, had the same engine and were built in the same factory. But the Boyles just weren’t a Chevy family.

Earlier this month, the U.S. auto industry was relieved from a strategic risk that branding could not cure. On October 1, the U.S. and Canada agreed to revised terms of their free-trade pact. Coupled with the U.S.-Mexico deal previously announced, we can nearly declare that North America remains a free trade area.

President Trump insists the new pact be called the U.S.-Mexico-Canada Agreement (USMCA). Like auto nameplates, the branding is secondary to what’s under the hood.

Framing of winners and losers is counterproductive; sometimes, it’s less important to win than to simply not lose. With USMCA, Mexico and Canada gained by preserving access to their biggest export market. As in any good negotiation, each side made concessions:

USMCA contains revised rules of origin and new restrictions on wages. NAFTA required that automobiles must contain at least 62.5% North American content to be excluded from tariffs; USMCA has raised the floor to 75%. Additionally, up to 45% of an auto’s value must be made by workers earning at least $16 per hour. This was a major concession by Mexico, whose factory workers earn about a third of that wage.

In practice, these changes will increase the cost of cars. Impairing Mexico’s labor advantage will most immediately impact the lower-priced vehicles currently produced in Mexico. They have the lowest margins and are most sensitive to higher input costs.

As for Mexican-made vehicles that do not meet the 75% North American sourcing requirement: Manufacturers may find it more expedient to pay the U.S.’ tariff rather than rearrange supply chains. The current tariff would be 2%, though the U.S. has separately threatened higher tariffs on autos. Because these requirements make North American manufacturing more expensive, the U.S. risks impairing exports and incentivizing production abroad.

The USMCA negotiation touched on more than the three named countries. The pact requires Canada and Mexico to notify the U.S. of trade negotiations with a “non-market economy.” The U.S. retains the right to withdraw from USMCA immediately if another trade agreement is signed. Though China is not named, the U.S. clearly seeks to keep the
whole continent estranged from China. Expect this theme to reemerge as the U.S. negotiates metals and auto tariffs with Japan and the European Union: Any new trade deal must help build a unified front against China.

USMCA also introduced a sunset clause. Six years after ratification, the three parties will reconvene to decide whether the agreement is working as they intended. If they decide to end it, the agreement will unwind over the following ten years. The U.S. had initially demanded that the new agreement terminate in just five years, an impractically short duration for North American businesses to make strategic decisions. Trade agreements should be revisited periodically, and this timeframe is a good start. 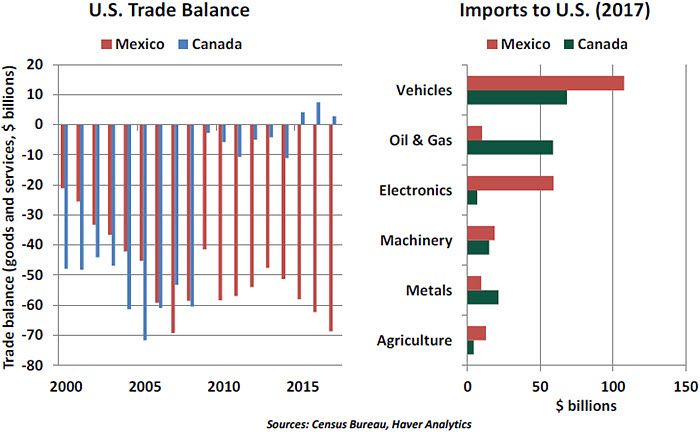 Discouragingly, USMCA did not resolve Section 232 tariffs on steel and aluminum. They remain in force (as do Canada and Mexico’s retaliations), to be separately negotiated. Indeed, the U.S. preserved its right to impose emergency tariffs on cars and car parts for national security reasons. The negotiation’s urgency was meant to ratify a new agreement before new leaders take charge. November 30 is the last day in office for Mexico’s current president, Enrique Peña Nieto. President-elect Andrés Manuel López Obrador supports the new agreement, but the turnover in administrations introduces the risk of last-minute changes. Political risk is higher in the U.S.: the majority Republican Party may lose control of the House of Representatives in November’s elections. Procedural review requirements will put off the Congressional vote until 2019, after newly-elected representatives are seated. At that time, despite USMCA’s broad appeal, it risks being held hostage to the advancement of other political priorities of the Democratic Party.

It is refreshing to see a deal come together, and we are encouraged to see that NAFTA was left fundamentally unchanged. For all the campaign rhetoric of NAFTA being a bad deal, it really has benefited all participants. Retaining it was the most prudent outcome. While the Trump administration threatened termination or a more dramatic rewrite, U.S. business interests made the case for the status quo. “America First” may have a different meaning for American businesses that depend on global supply chains.

We are discouraged, however, to see heavy-handed intervention in the manufacturing market. Wage controls are a bitter pill for automotive manufacturers, who will now need to reconfigure supply chains to satisfy arbitrary wage requirements or pay a tariff for non-compliance. The Canadian auto manufacturing sector never recovered from the
global financial crisis, and USMCA offers no new support. And without an end to the metals tariffs, trade tensions within North America will linger. We see the USMCA as a model for future trade negotiations in which shifting U.S. demands lead to incomplete agreements that leave the U.S. leverage for further threats.

In sum, trade on the continent will continue mostly as it has since NAFTA went into effect in 1994. And that environment has been especially valuable to the auto industry. European and Japanese brands have been able to set up extensive operations in North America, using NAFTA to the fullest. The Boyles’ driveway now contains a Honda and a Nissan, both of which were built in America. But still, no Chevys.

Just last Friday, there were reports that British Prime Minister (PM) Theresa May was close to a deal with the European Union (EU) for a “backstop” Brexit plan under which the U.K. would stay in a “temporary” customs union, but without an end date. There were also reports that May would accept that Northern Ireland should remain part of the single market during the backstop period.

Unsurprisingly, this proposal drew sharp criticism at home from both the Tory Eurosceptics and the Democratic Unionist Party (DUP) from Northern Ireland, which supports the conservative government. In addition, talks between the UK’s Brexit secretary and EU’s chief negotiator stalled over the weekend as a result of several differences, including the key issue of the Irish border.

Harder-line Brexiteers including Boris Johnson and David Davis are pushing for variants of a “Canada-style” deal with the EU. Modeled after the agreement reached between Canada and the EU last year, this sort of arrangement would eliminate tariffs on goods but not services, which account for 81.5% of the U.K. economy. British negotiators are hoping to cover services like finance and aviation by pitching a “Canada Plus” or “Super Canada” outline.

A Canada-style deal would offer much greater autonomy to the U.K., particularly with respect to trade and immigration, at the expense of unfettered access to the single market. This contrasts with our base case, a softer Brexit fashioned after Norway’s agreement with the EU, which offers greater market access but with much less autonomy.

There are also vast differences between the EU-Canada and EU-UK trade. The EU is Canada’s second-biggest export partner after the U.S., accounting for 7.3% of its total goods exports. By contrast, more than half of U.K. exports are bound for the EU. The difference is starker in services: Canada’s services exports to the EU amounted to £11 billion in 2015, compared to the UK's services export of £110 billion to the EU, of which financial services alone were £26 billion.

These agreements took time and effort. The EU and Canada worked for seven years to chalk out a trade deal, and the process of passage was very challenging. Hence, negotiating a Canada-style agreement under tight timelines will be much more challenging than moving forward with a Norway-style arrangement.

With less than six months to go for the U.K.’s divorce from the EU, the upcoming events will be watched closely:

Economists are always on the lookout for new tools that can sharpen insights and forecasts. Advanced analytics are offering some interesting innovations on this front.

Information on business activity has traditionally been backward-looking. When statisticians first set out to measure growth, employment and inflation, it took a substantial amount of time. Today, by contrast, there are an ample number of indicators which allow near-time or real-time assessments. As an example, “nowcasts” use high-frequency readings within a quarter to approximate quarterly growth in gross domestic product (GDP). The Federal Reserve Banks of Atlanta and New York both publish updated nowcasts regularly.

Econometricians are also harvesting information from nontraditional sources and mining them for insights. Internet search patterns have proven to be a rich lode; as an example, searches related to unemployment insurance appear to provide advance warning of turns in the labor market. Some have come to believe that sources like this are superior to traditional surveys, as they link more closely to people’s behavior.

Another application of “big data” to economic analysis is text-mapping the statements offered by policy makers. (The Federal Reserve is a frequent target of this approach.) Computer routines can scour years of documents and determine the frequency with which key words or phrases were used. These are often assembled into “word clusters” like the one above; terms are assigned point values to derive a sentiment score. Statisticians (or, more commonly, artificial intelligence routines) then look for links between the sentiment indicators and changes in policy. The Fed itself has done some interesting work in this area, which can be found here.

There are certainly inherent imprecisions in these new techniques. But they can be a useful complement to more traditional approaches, and they merit a place on our dashboards.