The Costs of Change

Nobel Prizes have been awarded since 1901. Each year, in each category, the selection committees have to choose from a range of impressive candidates.

Every now and then, the decision will be influenced by the group’s desire to make a strong statement on an issue of the day. The Reverend Dr. Martin Luther King Jr. was awarded the Nobel peace prize in 1964, as the U.S. civil rights movement was just gaining momentum. (His moving acceptance speech can be found here.) The literature prize in 1970 was given to Soviet dissident Aleksandr Solzhenitsyn, taking a stand against the oppression that he had endured.

In our view, this year’s Nobel Prize for Economic Sciences is also seeking to make a strong statement. One of this year’s winners, William Nordhaus, has spent his life studying the economic consequences of climate change. On the same day the award was announced, the United Nations issued a frightening report on trends in the earth’s temperature.

We won’t wade into the debate over the extent to which human activity is influencing climate. But the data show that the past several years have been the warmest in a century, and that the frequency of severe weather events has been increasing. 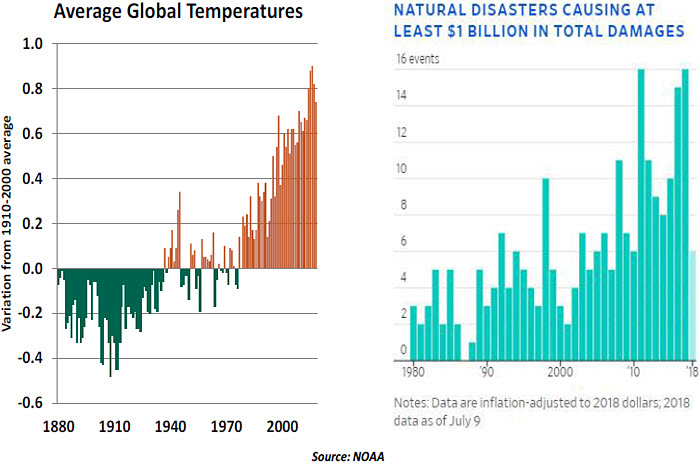 The impact of commerce on the environment has long been a focus for economists. Ronald Coase won the Nobel Prize in 1991 for his work in this area. One of Coase’s more famous articles was entitled “The Problem of Social Cost,” which lays out a framework for thinking about the subject. Atmospheric quality is what economists call a public good; it is shared by all who come into contact with it, but no one has absolute authority over it.

The costs of using a public good are hard to measure, and are typically not assessed and charged. This can lead to overuse. Coase, using the example of a factory and a fishery sharing the same stream, suggested that assigning property rights to one party or the other would initiate bargaining between the two that would lead to an optimal amount of pollution.

The Coase theorem has an academic elegance to it, but almost immediately runs into practical problems. The allocation of initial rights to public goods is a critical step, as one party will have to pay the other to reach equilibrium. Doing this fairly is very difficult. And environmental conditions are a shared global concern, bringing additional complexity to the problem.

In 1994, Nordhaus published the first generation of his Dynamic Integrated Climate-Economy model. It simulated the impact of carbon dioxide (CO2) on global temperatures. The approach has subsequently been used to project climatic outcomes and evaluate policies designed to change them. Among the corrective steps have been taxes on emissions, which can discourage the use of traditional fossil fuels and promote business processes that are friendlier to the environment. 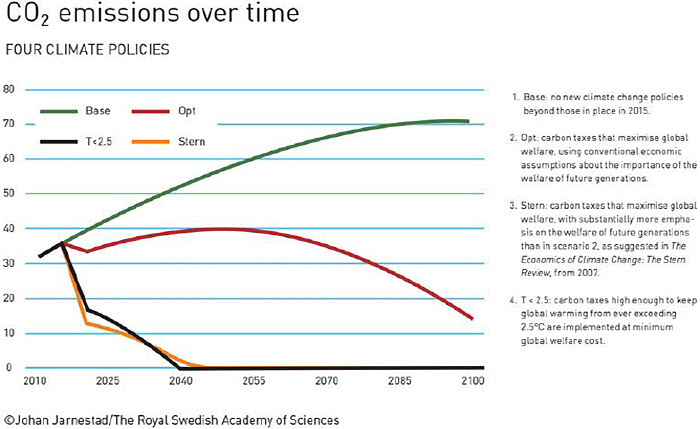 Carbon taxes were one of the tools recommended in the 2015 Paris Climate Accord, which commits signatories to shared goals for changes in global temperature. 181 countries have adopted the Accord, but the United States withdrew its participation in the summer of 2017.

The economic consequences of continued global warming will be substantial. Among them:

And if the human costs of climate change aren’t enough, a recent paper from Stanford University scientists estimates that global gross domestic product (GDP) will decline by 15% even if the targets set out in the Paris Accord are met. With the achievement of those targets in jeopardy, the loss of output could be even larger.

Some governments have been slow to address climate change, but investors have been more proactive. Environmental, social and governance (ESG) investments have risen in popularity; they allow portfolio managers to avoid companies whose carbon footprints are deemed too large.

One of the problems faced by Nordhaus and others concerned about climate change is the short-sightedness of citizens and policy-makers. The consequences seem far-off and improbable, while the costs of containing CO2 are more proximate. But our collective myopia could prove very expensive in the long run. In recognizing Nordhaus, the Nobel Prize authorities have encouraged all of us to place additional focus on climate change … before it’s too late.

Oil prices have been steadily rising this year, topping $80 per barrel (for Brent crude) for the first time since 2014. The outcome is a mix of politics and economics. Like many other commodities, demand, supply and the U.S. dollar’s value are the key drivers for oil. However, not many commodities have a similar sensitivity to geo-political affairs.

The recent surge in oil prices is driven by looming sanctions on Iran and loss of production from Venezuela as its economy collapses. The failure of Saudi Arabia and Russia (two of the largest crude oil producers) to increase supplies has also contributed to oil’s rise. 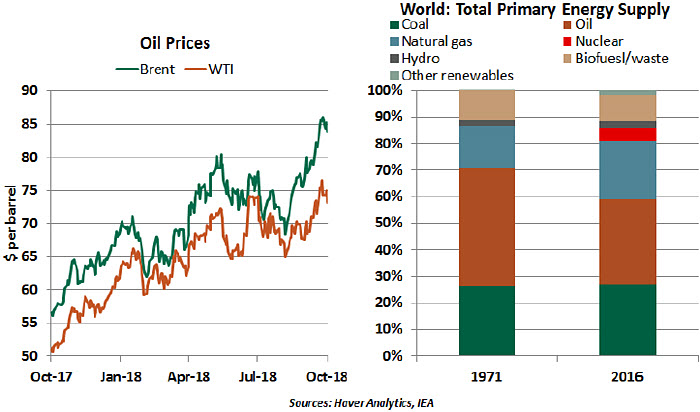 The price of U.S. West Texas Intermediate (WTI) grade oil has also surged since the summer, but booming U.S. shale production has helped limit the increase. The “spread” between Brent and WTI is quite wide at the moment, which is good for American energy consumers, but challenging for users in Europe and Asia. Some emerging markets, India and Indonesia in particular, suffer the most when Brent oil prices trend higher.

Oil is still the world’s dominant fuel, but its share has fallen from 44% of total primary energy supply in 1971 to 32% in 2016, while the shares of natural gas and nuclear power have increased notably. This has reduced the sensitivity of global economic growth to oil prices.

Further, the rising use of alternative energy for diverse purposes, including power generation (hydro and nuclear) and transportation (hybrid or electric vehicles), presents a long-term challenge for the nations that have relied on oil as their primary source of income. The Organization of Petroleum Exporting Countries (OPEC) has far less leverage than it used to.

Still, the shift away from hydrocarbons will be slow, as they are still used extensively in many industries. Perhaps the recent price action will speed up that process, to the benefit of energy consumers and the planet.

Many Ways to Get a Raise

The Phillips Curve postulates that as unemployment falls, inflation rises, because employers must pay higher wages to attract and retain talent. In this cycle, however, the Phillips relationship has been weak. Inflation and wage growth have been tame despite an unemployment rate that stands near a 50-year low.

But there is more to employment than just wages. Broadly stated, compensation packages consist of salary, bonuses, long-term incentives, medical benefits, retirement savings, transportation subsidies, childcare and even discounted pet insurance. These components can be mixed in different ways, depending on the circumstances.

Headline wage figures therefore do not capture the full picture of compensation. Only wages are included in the average hourly earnings series published by the Bureau of Labor Statistics. Employers are effectively paying their employees more without the appearance of increasing wages. Employers emphasize these supplemental benefits as a way to keep their employees’ spirits high, often issuing total pay statements to make their point.

During the current expansion, employers have hesitated to give raises. Wage increases will persist even as the economy slows down. By using bonuses and perks, employers stay nimble.

But these are not mere indulgences. The Affordable Care Act mandated health insurance for employees working more than 30 hours per week. The Kaiser Family Foundation estimates the cost of a family health insurance policy is approaching $20,000 per year. Workers pay 29% of the cost of family coverage (somewhat less for individual policies), leaving employers to cover an increasing amount. This rising cost has eaten into the funds available for wages.

The White House has sought to reframe the discussion of pay. In September, the Council of Economic Advisers issued a “Primer on Wage Measurement,” arguing that by valuing bonuses, retirement savings and health insurance, real wages have grown between 1.4% and 1.9% over the past year. Setting aside the political incentive to tell a positive story, these points are worth consideration. However it is measured, though, wage growth remains lower than its historical norms.

Today, employers find themselves running out of alternative ways to attract and retain employees, and so some are resorting to old-fashioned wage increases. Last week, Amazon announced a new $15 minimum wage for all of its workers. To some extent, this was a public concession to the rising cost of labor. However, it also served as a competitive signal: anyone considering a seasonal job might check first with Amazon before applying elsewhere. Other retailers have announced plans to raise wages, but none as large or immediate as Amazon’s plan. More quietly, other employers will now feel a need to give raises as to not lose their lower-paid workers to Amazon.

Announcements like Amazon’s effectively raise the minimum wage. The federal minimum wage of $7.25 has not moved in nine years. Practically, the Bureau of Labor Statistics has found that only 2.3% of workers actually receive pay at or below the minimum wage, suggesting that markets keep wages inflating without a mandated wage floor.

Amazon’s wage announcement had an interesting detail. While increasing their base wage, they ended their monthly incentive bonuses and restricted stock grants. Their employees “prefer the predictability and immediacy of cash,” a claim we consider plausible. Amazon’s stock grants were unique among low-wage employers; employees may have had difficulty valuing them. The shift from restricted stock to immediate, permanent compensation is a shift of value to workers.

Though wages have been the slowest component to rise, total compensation has grown reasonably well during this cycle. But with tight labor markets forcing a shift back toward wage increases, workers can look forward to the best holiday bonus of all: cash.