A Closer Look at the Fiscal Woes of Illinois and Brazil

Illinois prides itself as the state where Abraham Lincoln launched his political career. Before his time in politics, Lincoln was an entrepreneur in a small town in central Illinois. He borrowed heavily to purchase a general goods store that failed, leaving him $1,000 in debt—a staggering sum for an individual in the 1830s. Rather than skip or negotiate, Honest Abe spent years living simply and working several jobs to repay what he owed.

The Land of Lincoln would do well to recall this lesson in austerity from its most famous past resident. Illinois has endured a prolonged period of slow growth and mounting debt, and could be facing a slow grind like the one Lincoln experienced.

Illinois' fiscal problems are legion. They defy both simple explanations and simple remedies. The state's financial problems have grown gradually over the span of decades, and unwinding them will take a similarly prolonged length of time.

The root of Illinois' current fiscal situation is the pension program for its employees. Defined-benefit pensions are not necessarily bad. They have been the norm for many government jobs, but Illinois has chronically underfunded its pensions. Resources in the various plans will not be sufficient to support the growing stream of retired state workers. 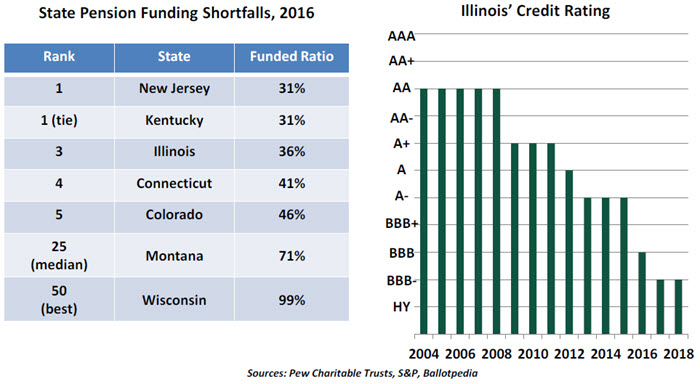 The underfunding started in the 1990s, with the adoption of a pension funding plan that assumed generous future contributions. In the intervening years, various circumstances prevented the fulfillment of this plan. As a consequence, the state's pension funding ratio is consistently among the lowest of all states.

The Illinois state constitution requires a balanced budget. While this measure sounds as though it would enhance fiscal discipline, it has had the opposite effect. The budget has been balanced through myopic plugs like pension underfunding and bond issuance. Meanwhile, the constitution explicitly protects the state's pension obligations; the promised payments and 3% annual benefit increases cannot be renegotiated. Amending the constitution to reduce the benefits received by a highly-engaged voting bloc would be politically fraught—but may become necessary.

The fiscal reckoning can no longer be deferred. The state's credit rating is one downgrade away from junk bond status. Financial uncertainty is weighing on the state's competitiveness.

Illinois faces other challenges. While the population of the U.S. continues to rise, and many metropolitan areas are thriving, Illinois' population is falling. On net, 33,703 residents left Illinois in 2017. There is no single reason for the population loss, but Illinois' fiscal position is certainly a factor. State debt presents a tax risk to entrepreneurs who are considering whether to establish or expand a business. As the population falls, fewer taxpayers are left to pay the rising tax burden.

The first step toward solving a problem is to recognize it. All candidates in the upcoming gubernatorial election have put the fiscal situation at the top of their agendas. Illinois' credit rating has forced the state to stop adding to its debt balance. And as of 2011, the generous pension plan that caused the problem stopped applying to new hires. This reform came late, but finding ourselves in a hole, we have at least stopped digging. 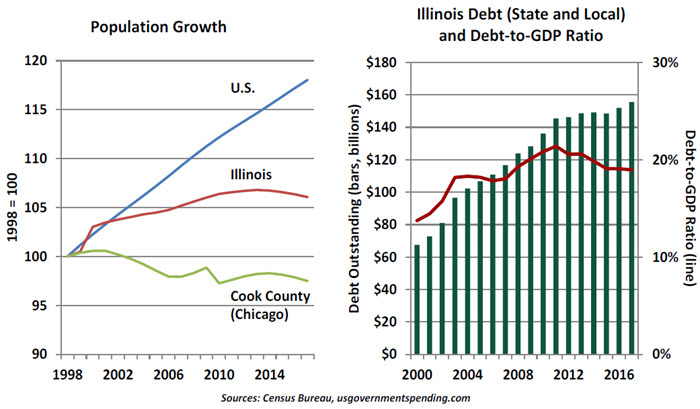 Options for recovery are limited. Bankruptcy would be novel: States are given no provision in existing bankruptcy laws. Illinois could appeal to the federal government for support, but resistance from the other 49 states would be likely.

Cutting spending is a conservative rally cry, but little is left to cut. After pensions, Illinois' largest expenditures include healthcare and education. Leaders cut these line items at their own risk. Future collective bargaining agreements with state workers will need to be leaner.

Tax increases appear inevitable. They will be the least satisfying of tax increases, with proceeds used to pay debt, not build infrastructure or fund new programs. At best, the increases may be structured to disperse the pain. Currently, Illinois assesses a flat 4.95% income tax. A current campaign proposal is a graduated income tax that would levy higher rates on higher earners.

The state may also consider taxing services. Adding a tax on landscapers and barbers would be unwelcome but digestible by most residents. Property taxes can only rise, too, even though they do not fund the state government. With more revenue needed to fund pensions, less state funding will be available to share with municipalities.

More creative proposals are unlikely to move the needle. Legalizing recreational marijuana would raise some tax revenue, but Colorado's marijuana taxes increased gross tax appropriations by only about 2%. And Illinois' past ventures into vice, like authorizing casinos and the state lottery, failed to generate enough revenue to relieve budgetary pressure.

Illinois has many advantages to help its economic development. Its central location within the country makes it a natural shipping and logistics hub. It hosts a bevy of great universities. It has ample fresh water and a low risk of natural disasters. Downtown Chicago is attracting corporate headquarters and a growing population of college graduates. Outside Chicago, the state has expansive land for further development, a feature that many landlocked urban centers cannot offer.

Illinois' debt-to-GDP ratio offers some solace, as well. It has fallen slightly in recent years, as the state's ability to issue debt has been constrained. However, its current 19% level is only the sixth-highest among the 50 states; the average is 15%, and no state is debt-free. The debt level is surmountable for an economy of Illinois' size.

Curing the debt will require years of fiscal discipline and potentially a change to the state constitution. Even the Abraham Lincoln Presidential Library may sell some of its artifacts to pay debt. The sadness and irony of that should prompt legislators to put aside partisanship and work harder to put our state on sound fiscal footing.

Brazil is a nation united by football. Its national side is known as the seleção, or the "selected." The team has won five World Cup titles and is always one of the best in the world.

Unfortunately, Brazil's leadership is almost always among the worst in the world. On Sunday, Brazilians will begin the process of selecting a new president in the most uncertain and polarized election since Brazil returned to democracy in 1985. Voters' anger toward imprisonments, corruption and the dire state of public services is fueling populist, anti-establishment contenders.

The leading candidates are left-leaning Workers Party's (PT) candidate Fernando Haddad (handpicked by jailed former president Luiz Inácio Lula da Silva) and far-right candidate Jair Bolsonaro of the Social Liberal Party, who is known for his impolitic views. (He has been described as the Brazilian Donald Trump.) Both men are polling well, but both also have reasonably high negative ratings. A run-off vote on 28 October is likely, with Bolsonaro holding a slight edge.

Trading in the Brazilian real (BRL) has followed a path similar to its 2002 experience, when Lula was elected president. Back then, investors worried about a sovereign default, but Lula's business-friendly cabinet and repayment of Brazil's International Monetary Fund credit line boosted investor confidence. These prudent approaches were reversed under President Dilma Rousseff, leaving Brazil in much poorer financial condition.

The BRL has been one of the worst-performing currencies so far this year (depreciating over 20% year-to-date), owing to both weak fundamentals and anxiety ahead of the first round of voting. This has occurred despite the significant reserve buffers Brazil has built over the last 15 years to make the economy less vulnerable to exchange rate shocks.

Fundamentally, Brazil's economy lags its regional peers. The economy lost 10% of its output between the third quarter of 2013 and the second quarter of 2017. Although the economy is relatively closed, it is vulnerable to trade restrictions, commodity price shocks and a weaker demand from China (Brazil's top export destination).

The fiscal deficit has deteriorated considerably, from 3.0% of gross domestic product (GDP) in 2013 to 7.8% in 2017, the second worst in the region (after Venezuela). Government debt is the highest among major regional economies (up from 60% of GDP in 2013 to 84% in 2017), although the majority of the sovereign debt is denominated in BRL. The country is a net external creditor, holding more foreign currency assets than debt, which may help reduce the risk of default. 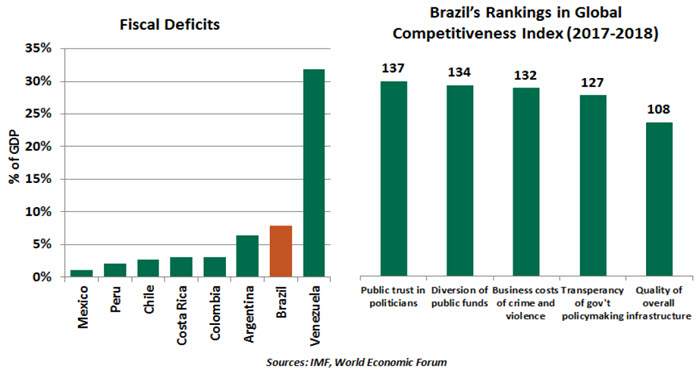 Macro indicators aren't the only measures where Brazil is seen lagging. According to the World Economic Forum's Global Competitiveness Index 2017-2018, Brazil ranks last in the world when it comes to "public trust in politicians" and fourth from the bottom in "diversion of public funds."

A key separating point between the leading candidates' proposed plans is fiscal policy. Bolsonaro promises to raise BRL 700 billion from privatization to reduce public debt, while Haddad is keen on embarking on state-led growth, which includes selling 10% of reserves to fund infrastructure works.

Though Bolsonaro is running on a pro-market agenda, his presidency wouldn't bode well for the country's democratic institutions. Neither leading contender will alter country's long-term outlook. Brazil needs pension reform, improvement in infrastructure and easier business conditions to achieve sustainable economic growth. The country has already lost an opportunity to implement structural reforms amid the favorable external backdrop. It cannot afford to delay more.

The most successful nation in the history of the football World Cup hasn't lifted this trophy since 2002. It needs to bring back its glory, both on and off the football pitch. Otherwise, both the seleção and the Brazilian economy are at risk of losing their sheen in the global arena.

Carl reports on the economics of his daughter's recent wedding.

My daughter was married last weekend. The outlays related to the event are likely to raise economic growth in the third quarter by a considerable increment. But the investment was very much worth it.

Despite being the progeny of parents who are both trained in economics, my daughter has expressed little interest in the subject. Nonetheless, it has had a powerful influence on her life...including her decision to get married.

The Nobel Prize-winning economist Gary Becker postulated that "A person decides to marry when the utility expected from marriage exceeds that expected from remaining single or from additional search for a more suitable mate." That theory doesn't sound very romantic, but the data has proven it to be true.

Rates of marriage worldwide have been falling for the past 50 years. This has coincided with the increase of women's labor force participation, which has reduced their need to marry strictly for economic reasons. Since the financial crisis, couples have deferred marriage because of depleted savings and slow income growth. In the U.S., the accumulation of student loans has also been a factor; marrying someone who is carrying significant debt means assuming those liabilities.

Once a match is made, unions create economies of scale in living expenses, allowing for higher levels of saving. In general, married couples are wealthier than single persons or cohabitating couples, and have a higher propensity to spend. They are much more likely to be homeowners.

None of this is to suggest that weddings are based solely on economic considerations, or that alternate family forms are less viable. But the data indicate that marriage creates value.

The data also indicates that married couples are also much more likely to have children. My wife has certainly been hoping those stats prove correct in the case of our daughter, but that will involve a whole different set of calculations.