Get ready, gold bulls: The precious metal could be close to finding a bottom.

The price of gold fell back below $1,200 an ounce again this week as the U.S. dollar advanced following another federal funds rate hike. It’s now set to log its sixth straight month of declines, its longest losing streak since 1989.

That gold’s not trading below $1,150 is, I believe, remarkable. There’s a lot motivating the bears right now. Besides a stronger dollar and higher interest rate, stocks are still going strong, buoyed by record buybacks and massive inflows into passive investment products. In the week ended September 20, investors poured as much as $34.3 billion into ETFs, taking year-to-date inflows to nearly $215 billion, according to FactSet data.

This makes gold mining stocks look especially attractive by comparison. Relative to U.S. blue chips, the FTSE Gold Mines Index is now at its most discounted level in over 20 years. There are other signs that a bottom is near.

For one, Vanguard just restructured its precious metals mutual fund, slashing its exposure to the industry from 80 percent to only 25 percent. This means the world’s largest fund company will no longer offer its investors a way to participate in a potential rally in metals and mining stocks.

The last time Vanguard made a change like this, it coincided with a huge run-up in metal prices. In 2001, gold was just as unloved as it is now, prompting Vanguard to drop the word “Gold” from what was then the Gold and Precious Metals Fund.

This week, mining giants Barrick Gold and Randgold Resources announced an $18 billion merger that, once complete, will create the world’s largest gold producer. An “industry champion for long-term value creation,” according to BMO Capital Markets, the resultant company will “operate five of the 10 ‘tier one’ gold mines on a total cash cost basis and possess numerous projects with potential to” deliver sustainable profitability. Historically, a telltale sign that an industry has found a bottom is consolidation—just look at the wave of mergers and takeovers in the then-struggling airline industry following the financial crisis.

Other financial firms and analysts also find the Barrick-Randgold news positive—for the two senior producers as well as metals and mining as a whole. Scotiabank believes the merger “improves [Barrick’s] overall asset quality, balance sheet, free cash flow profile, technical expertise and management team, with no takeout premium paid.” The deal, says the Royal Bank of Canada (RBC), “could spur a pick-up in M&As, which in our view could result in a turnaround in mining equity performance.”

Good news indeed as inflation continues to ramp up. The price of Brent oil, the international benchmark, closed above $80 a barrel this week for the first time since November 2014. That’s an incredible threefold increase from its recent low of $27 a barrel, set in January 2016.

The Incredible Shrinking Stock Market Is Shrinking Even Faster

As you already know, one of the key reasons why gold has been so highly valued for centuries—as a commodity and currency—is its scarcity. It makes up roughly 0.003 parts per million of the earth’s crust. According to the World Gold Council (WGC), an estimated 190,040 metric tons of the stuff have been mined since the beginning of time, leaving only 54,000 metric tons in the ground for producers to dig up, at greater expense.

“Peak gold,” as some experts call it, is a real concern, one that could rocket the price of the yellow metal into the stratosphere on a supply-demand imbalance.

Scarcity, after all, is what’s helping to drive the equity bull market even higher right now. Over the past 20 years, the number of listed companies has steadily been shrinking, mostly as a result of tougher securities regulations. And now, those companies—flush with cash thanks to last year’s corporate tax reform—are buying back their own stock at record and near-record levels. 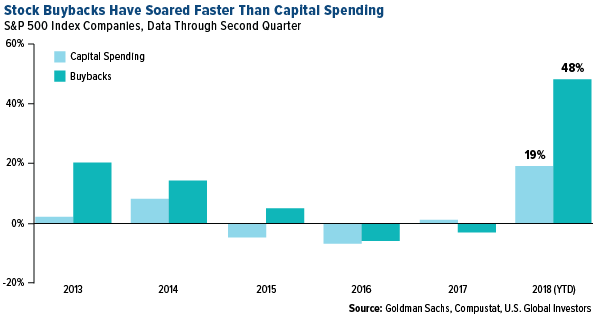 Just how much? I shared with you recently that in the June quarter alone, S&P 500 companies spent a record $190.6 billion on stock repurchases, an increase of almost 60 percent from the same quarter a year ago. Apple led the pack, taking $21.9 billion worth of stock out of circulation. That’s down slightly from the record $22.8 billion in the first quarter.

In general, Wall Street likes buybacks. Because they lower the number of shares outstanding, earnings per share (EPS) and dividends available per share increase even when there isn’t any profit growth.

But there are a couple of issues. First, buybacks require capital that could have otherwise been spent on investing, upgrading equipment, giving workers raises and the like. For the first time in 10 years, according to Goldman Sachs, buybacks have outstripped capital spending so far in 2018. The S&P 500 is already trading at overinflated prices, meaning companies like Apple are buying high.

Second, buybacks take shares off the market. Over the past decade, companies have bought back $4.4 trillion as historically low interest rates created, for some, a more favorable environment to float debt instead of equity. Below, I chose to highlight the consumer staples sector because the decline in shares since 2006 has been so dramatic, falling from around 32.5 billion shares to 27.5 billion shares—a decrease of more than 15 percent. Today, “not enough shares are being issued to offset those being withdrawn from circulation,” according to Reuters. Net equity supply turned negative for the first time ever in 2016, and it could end in negative territory again by the end of this year.

Coupled with the ticking passive index bomb I wrote about earlier in the month, fundamental investing is changing. It’s hard to say where this will end—when there’s only one share of Apple left? Prices would explode, and investing would become even more out-of-reach for many than it already is today. This week spot gold closed at $1,192.50 down $6.50 per ounce, or 0.54 percent. Gold stocks, as measured by the NYSE Arca Gold Miners Index, ended the week lower by 1.36 percent. Junior-tiered stocks slightly underperformed seniors for the week, as the S&P/TSX Venture Index came in off 1.49 percent. The U.S. Trade-Weighted Dollar Index rose 1.03 percent for the week.