Digging Deeper Into The Recovery After The Global Financial Crisis

Vaibhav Tandon reflects on the eurozone’s experience since the financial crisis.

I attained my bachelor’s degree in foreign trade in 2008. I got hooked on economics in college, as I was attracted by the prospect of learning a science that could explain human behavior and offer the hope of making predictions about the future.

A year later, my interest in the subject prompted me to pursue a postgraduate degree in economics in the United Kingdom. I believed that by the by the time I graduated, the job market would have recovered enough to offer me long-term career prospects there. That hope went unfulfilled. The financial crisis proved much more difficult for Europe than it was for the US, and you can still see signs of it today.

In Europe, the crisis started to unfold on August 9, 2007. The European Central Bank (ECB) injected €95 billion into the banking system following BNP Paribas’ suspension of three of its investment funds. One year later, Lehman Brothers fell, and the contagion accelerated.

European banks suffered mightily. As a group, they were more undercapitalized than their American counterparts: their assets-to-equity ratio averaged 25%, compared to around 10% for U.S. banks in 2008. Tight linkages between national governments and their national champion banks had impaired the effectiveness of financial oversight and allowed excesses to develop. The ECB had not yet been given the authority to supervise banks. 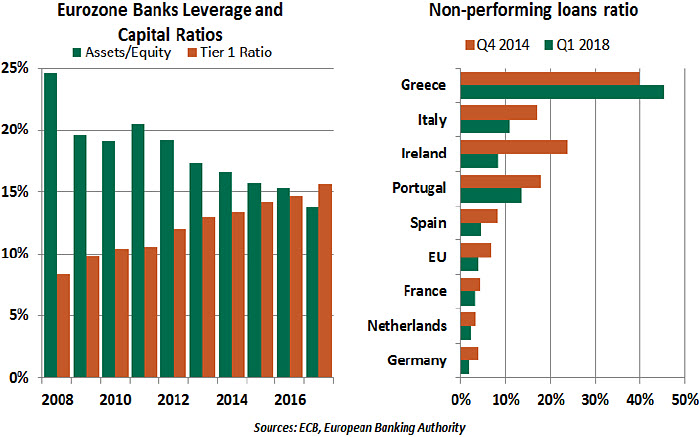 National authorities were forced to take significant ownership stakes in a number of institutions to prevent them from failing. While some divestiture has taken place, government ownership of European banks remains significant in some cases.

Unlike the U.S., the European Union’s (EU) response to the crisis was slowed by a complex structure of economic governance. On the fiscal side, the eurozone was unable to use counter-cyclical spending to buffer the economic aftershocks of the crisis. In many countries, years of unsustainable government policies created huge deficits and high debt levels, well beyond the criteria set out in the Maastricht Treaty. Over-indebted European nations like Portugal, Greece and Ireland were at risk of bankruptcy and required emergency assistance. Countries with strong fiscal positions, like Germany, have been reluctant to extend themselves for the common good.

The European Financial Stability Facility (EFSF) and its successor, the European Stability Mechanism, helped member nations in severe financial distress. This program provided needed funding (through the issuance of EFSF bonds and other instruments) to sustain Greece, Ireland, Portugal, Spain and Cyprus.

The ECB’s initial monetary policy response was modest compared to the extraordinary measures taken by the Federal Reserve, the Bank of England and the Bank of Japan. The Fed was the first to bring rates down to almost zero at the end of 2008; it took the ECB five years to reach that level. Europe started quantitative easing (QE) only as a last resort
when faced with the threat of deflation, over strenuous objections within the membership
of the ECB’s governing council.

The ECB and the Federal Reserve had set up an important currency swap line that enabled euro area banks to obtain U.S. dollars to fund their USD-denominated assets. These types of facilities would be much harder to re-establish today, given the rise of nationalism. 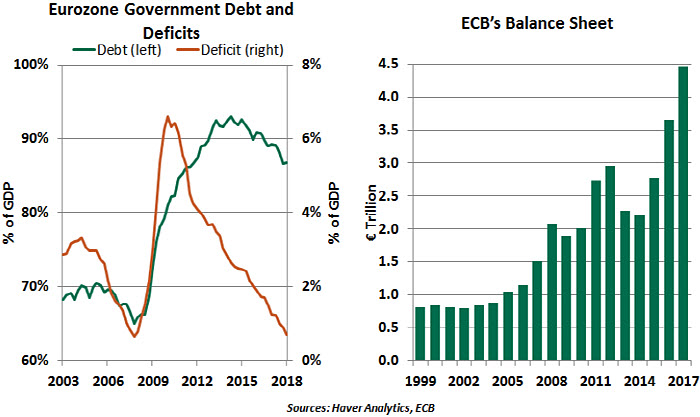 The ECB did find clever ways to shore up bank liquidity, by auctioning long-term funding at low rates and purchasing covered bonds. Perhaps most significantly, ECB President Mario Draghi changed market sentiment almost single-handedly with a 2012 speech, in which he asserted: “The ECB is ready to do whatever it takes to preserve the euro. And believe me, it will be enough.” The ECB’s QE program not only drove long-term rates down but also acted as a buyer for sovereign debt. To avoid a prohibition on the purchase of newly-issued sovereign debt, the ECB opened with secondary market purchases. The effectiveness of the effort has been hindered, to a modest degree, by rules governing the proportion of bonds the ECB can buy from each country. Germany needs the least aid, but its debt makes up the largest share of the program.

In recent years, efforts to strengthen the eurozone’s financial system have advanced. EU banks have lowered their leverage and are much better capitalized now than they were before the crisis (the aggregate Tier 1 ratio for the eurozone now stands at 15%). But they remain more leveraged than their American counterparts, and progress has been uneven across countries.

Other important areas of reform include:

There is still a long way to go, though, with many EU banks limping along in an impaired state. According to Bain & Company’s 2018 Health Check of the Banking System, 26% of banks are at high risk. Banks in Italy, Greece, Portugal and Cyprus have the most distressed profitability and asset quality.

Little to no progress has been made on setting up a eurozone-wide deposit insurance scheme and a regulatory rulebook for its 5,000+ banks. The capital markets union, which would allow the issuance of eurobonds instead of local sovereign debt, remains little more than a dream.

In terms of economic performance, there is little doubt the region today is on relatively solid footing. The expansion is into its sixth year, employment is at a record high, wages are finally recovering and inflation is progressing towards its target.

Though the eurozone has emerged stronger, it is still more vulnerable than the U.S. The push toward austerity, reforms to increase competitiveness and the uneven recovery have fueled eurosceptic sentiment. Threats from member nations to abandon the euro remain just rhetoric, but the level of political stress will make reforms more problematic.

It is in Europe’s best interest to continue moving towards greater integration, reforms and correcting macro imbalances. But when times are tough, calls for financial harmony lead to political disharmony. Populism has been a sustained force that will only grow louder in the next downturn.

The lingering European crisis naturally led to a difficult job market, especially for foreign students. I ultimately found better opportunities back home in India. Though it wasn’t my original intent, I am quite content to watch Europe’s challenges play out from afar.

The U.S. housing market has received well-deserved attention over the past 15 years. It was the basis of the bubble that contributed to the events of 10 years ago. In the ensuing recovery, it has been the slowest sector to rebound. Today, the real estate market is operating at a new normal: below the excesses seen before the crisis, but with better results than in the period of standstill that followed the recession.

Housing is a frequent topic of economic analysis, but we must remember that the data points represent real people. Buying a home is an aspirational goal, a significant life event and the largest purchase most individuals will ever make. It requires years of saving and responsible use of credit. In a well-functioning economy, more consumers will become eligible to buy homes, and a supply of homes and mortgages will be available to them. After years of adjustment, equilibrium is in sight.

In the cleanup following the housing crash, the mortgage market was the focus of greater regulation to prevent the behaviors that led to the crisis. Mortgage originators are now held more accountable for the loans they approve, and Fannie May and Freddie Mac have more stringent requirements for loans to be insured and securitized under their auspices.

As a result, housing was the last consumer lending segment to recover from the global financial crisis. Many mortgage brokers left the industry, and consumers found it difficult to meet the higher bar set by post-crisis regulations. The homeownership rate fell even as employment and income showed improvement, finally reaching its trough of 63% in 2016. 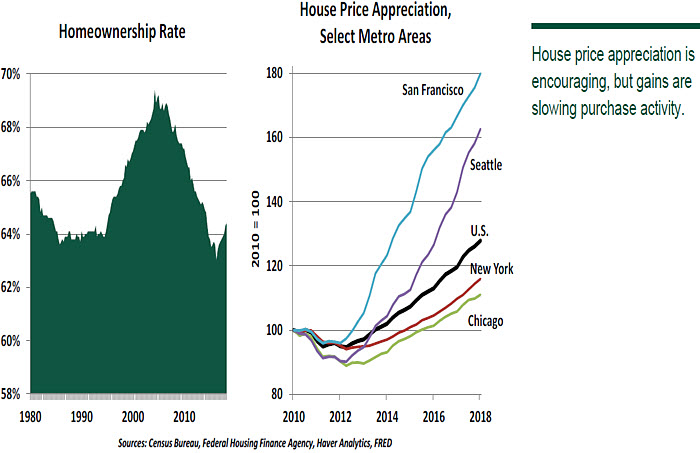 After a long and painful correction, house prices finally turned back upward in 2012. The subsequent appreciation has been great news for many homeowners. Zillow estimates that less than 10% of homeowners owe more on their mortgages than their homes are worth, down from a peak of 31% in 2011. Consumers who bought in the early stages of the recovery gained housing wealth rapidly. Today, house price indices in most markets exceed the highs seen in the last cycle.

Home builders were hesitant to embrace the recovering market; their pain was too fresh, and many contractors had moved on to other types of work. As a result, the inventory of new homes for sale has diminished. Housing starts have improved, but stand at a level well below the inflated activity seen before the recession.

As the market recovered and consumers learned to navigate revised underwriting processes, the volume of sales increased. Given the recent history of the market, there is understandable concern about the residential real estate market again becoming overvalued. Thus far, home loans are demonstrating low delinquencies, and we are not yet worried about overvaluation. However, higher values diminish housing affordability. The higher the cost of entry, the fewer first-time homebuyers will enter the market. Younger buyers often also struggle to find room for a mortgage in budgets already constrained by student loan payments.

Higher valuations are not the only headwind facing home sales. Rising interest rates flow directly to the mortgage market. Since the Federal Reserve began raising the Fed funds rate in 2015, mortgage rates have gradually increased from their record lows. In a lending decision as large as a home, loan applicants are approved based on their ability to meet a monthly payment requirement. Any interest rate increase consumes funds that would be spent on a higher-value home.

The tax advantage of home ownership is also eroding. The Tax Cuts and Jobs Act of 2017 changed the calculus how a home factors into a consumer’s taxes. While mortgage interest remains deductible for loans under $750,000, the doubling of the standard deduction means fewer taxpayers will claim this deduction. The Joint Committee on Taxation estimated a 57% reduction in the number of taxpayers who will deduct mortgage interest in 2018. In addition, tax reform limited the deductibility of property taxes to $10,000 per year, a disadvantage for homeowners in high-tax regions. While many life factors go into the decision to purchase a home, the loss of a tax deduction may deter some potential buyers on the margin.

Appreciating home prices have brought the dormant home equity lending market back to life. Cash-out refinancing and home equity lines of credit are favorable products: The collateral of a residence keeps their interest rates low, and they are tax-deductible if used to improve a home. However, a borrower must own a home with sufficient equity to borrow against. When property values plunged, so did the eligible market. As prices recovered, so has home equity lending.

In aggregate, the combination of stringent underwriting requirements, limited inventory, high prices and reduced tax advantages present a bevy of obstacles to home ownership. But undertaking a purchase this large should require some effort. The appeal of owning a home, for both personal stability and wealth accumulation, has not changed. Housing should be neither a bubble nor an anchor on the economy, and the market appears to have achieved balance between the two.