The Fed Reaches for the Stars

remarks at the recent Jackson Hole summit. The Fed’s decisions, he noted, are often based on the distance of inflation, unemployment and growth from their long-run equilibria. In modeling shorthand, these long-run levels are known as “stars.”

“Navigating by the stars can sound straightforward,” said Powell. “Guiding policy by the stars in practice, however, has been quite challenging of late because our best assessments of the location of the stars have been changing significantly.”

The stars certainly seem aligned in support of an interest rate increase next week, which is widely anticipated. But the market’s telescopes will be looking for indicators of how much farther the Fed has to go before reaching its ultimate destination.

Here is our take on the likely content of next week’s conversations.

The U.S. economy had good momentum entering 2018, and thanks to the Tax Cuts and Jobs Act of 2017, activity has accelerated. The second-quarter results are unlikely to be repeated (there was a surge in exports as firms tried to beat upcoming tariffs), but the economy is on pace for real growth of 3% for the full year. Our latest forecast can be found here.

Growth in the coming quarters will be tempered as the cost of trade actions becomes apparent. Tensions have diminished with the EU and Mexico, but an extensive new round of tariffs on Chinese products was announced this week. Estimates suggest that trade restrictions could reduce real gross domestic product (GDP) growth by 0.5% next year, a sizeable amount.

Household debt has moderated in the last decade, and corporations are awash with cash released by tax reform. So interest rate increases from the Fed may not be having the same dampening effect that they have in the past. Overall, financial conditions have actually gotten easier since the Fed began raising rates in 2015.

The data make a fairly compelling case that we are at, or past, full employment. Even broad measures of joblessness are stronger now than they were in 2008. The number of job openings exceeds the number of people looking for work, and the number of people
voluntarily quitting their jobs for better ones is at a record level. As these metrics have risen,
so has wage growth. 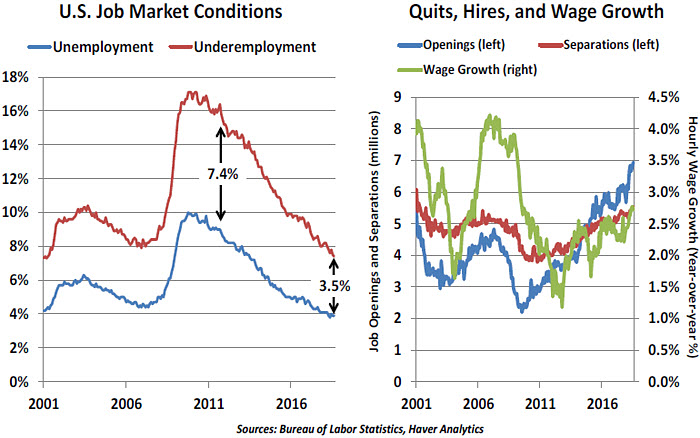 With labor demand strong, it seems inevitable that wage gains will accelerate. This does not necessarily mean higher inflation, but it will almost certainly not mean lower inflation. 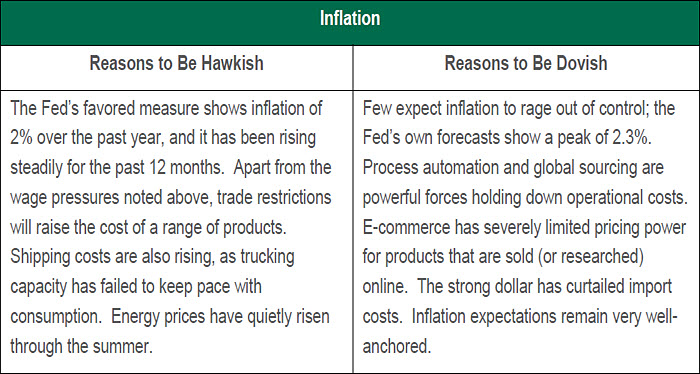 At the outset, we should note that the links between unemployment and wages and between wages and prices are weaker than they have been in the past. We acknowledge that the series of secular changes noted above are powerful, and likely to spread to the service sector over the next decade. We are not calling for inflation to rage as it did 30 years ago.

However, the retreat from globalization (which is not just confined to the U.S.) is a secular development that will not be helpful to containing the price level. The precise effect on inflation will depend on what fraction of cost pressures can be passed on. Past episodes suggest that consumers will end up paying steeper prices.

And while the “speed limit” of the economy (long-run potential GDP growth) is one of the stars of uncertain position mentioned earlier, the current economic pace is almost certainly well above it. Reduced capacity usually means higher inflation. 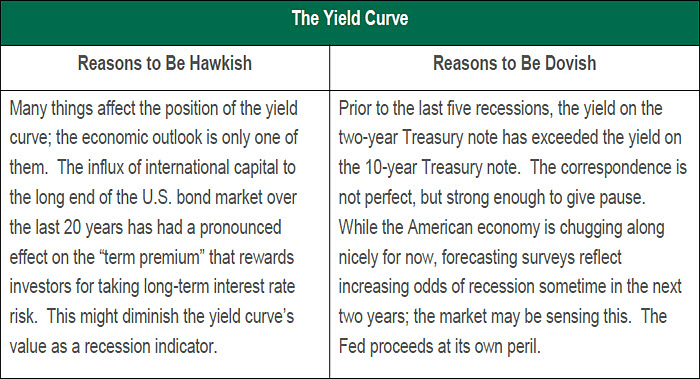 Federal Open Market Committee (FOMC) members have expressed a range of thoughts on the topic of the yield curve. Work from the Federal Reserve Bank of San Francisco offered a different lens on the yield curve, with much less threatening conclusions. 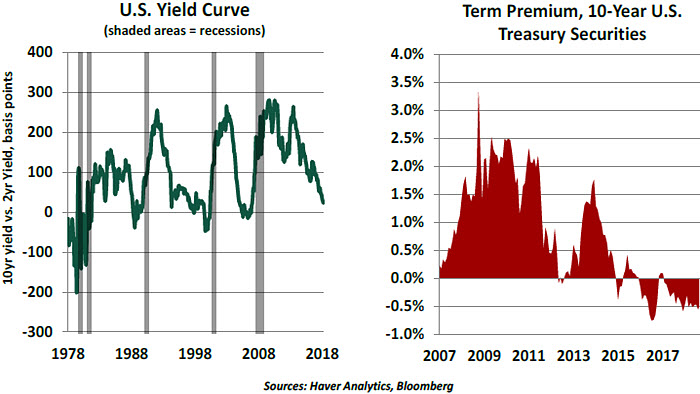 The two-year yield likely reflects an expectation for at least two more hikes from the Fed, which could (in theory) be undertaken without inverting the longer end of the curve. Thereafter, caution would be advised in any event; the Fed would very much like to do what it feels is needed without creating a yield curve inversion.

The U.S. is the world's largest economy, and the dollar is the world's reserve currency. Any action by the Federal Reserve to influence the money supply has consequences for the global financial markets. Through this channel, a negative feedback loop back to U.S. growth could be established.

The low interest rate environment and abundant liquidity from developed markets over the last few years has led to higher debt accumulation in many EMs, much of it denominated in foreign currencies. With interest rates now increasing, concern is rising over the ability of companies within these countries to repay dollar-denominated debt. 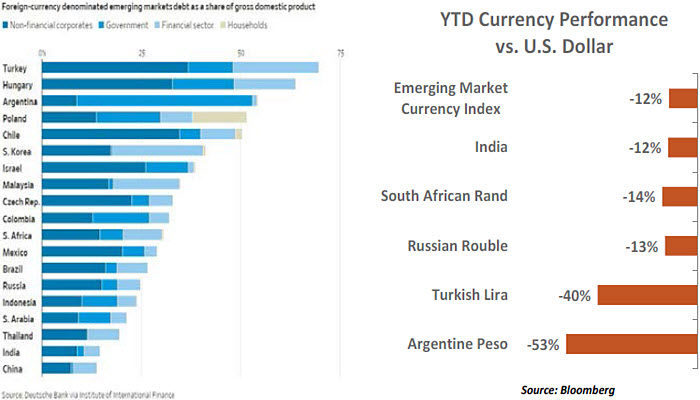 Even though many EMs today are less vulnerable, they remain sensitive to swings in investment sentiment. The Fed has been watching developments very closely, but has acknowledged that their consequences are hard to gauge. So far, the markets most acutely affected are not major contributors to global GDP. Unless and until something more significant threatens, the Fed will likely remain focused on domestic fundamentals.

A 25 basis point increase in interest rates is a virtual certainty next week. The market odds on a similar move in December have risen to almost 70%. From there, things get a little fuzzier; there are many variables to consider when thinking more than a few months ahead. A lot can happen between now and next spring.

We are anticipating four more increases from the Fed, at the end of each of the next four quarters. Our forecast is rooted in two foundations:

When Busy Becomes a Barrier