A Testing Time For Inflation Targeting

The Federal Reserve recently conducted its annual conference in Jackson Hole, Wyoming. Prominent on the agenda were discussions of inflation, or the lack thereof. Many central banks around the world have inflation targets, and have been frustrated by their inability to reach them.

It has been more than 25 years since inflation targeting first arrived on the scene, and it has grown to dominate monetary frameworks. But it is currently facing a stern test. The outcome of this examination will have direct consequences for the paths of global interest rates and global markets.

In the 1970s, inflation in developed markets had reached levels that would be considered excessive in emerging markets today. The year-over-year increase in consumer prices peaked at 15% in the United States and in continental Europe, and at 25% in the United Kingdom and Japan. A succession of oil shocks had a lot to do with this; while the shocks were temporary, their impact on inflation expectations was more lasting. 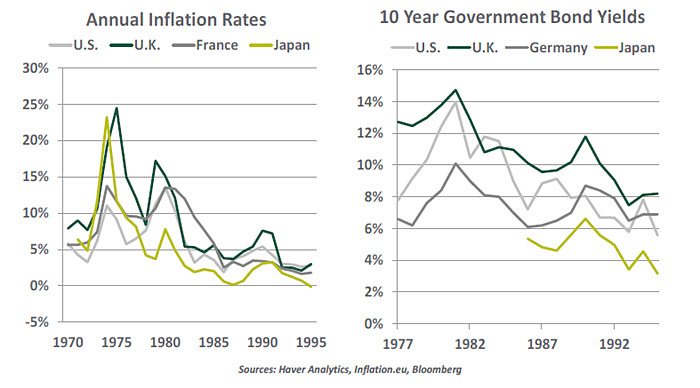 In the search for a solution, central banks shifted strategy and began to closely monitor and manage the national money supply. Slowly but surely, inflation was tamed. The effort coincided with a series of recessions in developed markets; debate continues as to whether this was the result of restrictive monetary policy or the consequences of industrial damage done by the realignment in energy prices. A steep correction in the price of crude oil (which declined from $37 per barrel in 1979 to less than $15 per barrel in 1986) also helped to bring inflation back under control.

Ultimately, however, money supply targeting ran its course. Defining money became more difficult, and linkages between money, credit and inflation were weakened by globalization and disintermediation. These developments led central banks on a search for a new policy paradigm. And at the beginning of the 1990s, they found one.

Price stability is a ubiquitous element of global central bank mandates, and for good reason. A predictable inflation environment provides a favorable foundation for economic growth and employment. Excessive inflation reduces purchasing power and cuts into investment returns. And hyperinflation can destabilize countries and lead to extreme political outcomes.

Formal inflation targeting was first adopted by the Reserve Bank of New Zealand (RBNZ) in 1990. (An interesting RBNZ retrospective on that decision can be found here.) Canada followed the next year, and the United Kingdom the year after that. The U.S. Federal Reserve ultimately adopted a target in early 2012. (Alan Greenspan was not a fan, deeming such a target as poorly founded and as an encroachment on his discretion.)

It is always risky to build a tall skyscraper on a thin foundation. The potential error around inflation measures remains large, and yet significant weight has been placed on these measures by central banks.

Judged solely by the numbers, the performance of monetary policy over the past several years would be rated substandard. With the exception of the Bank of England (which is coping with the aftermath of Brexit), central banks in major markets have struggled to meet their inflation mandates despite years of low interest rates and massive quantitative easing (QE) programs.

Secular factors have been cited as leading contributors to the decade of disinflation. Several of these were featured on the agenda at Jackson Hole. Among them:

a) Broken Phillips Curves. Unemployment rates have hit new lows in a number of countries. Age-adjusted labor force participation is rising. The number of job openings in the United States exceeds the number of jobless persons. Anecdotes of labor shortages are legion. And yet wage gains remain well below the levels seen in past cycles.

There are a range of potential explanations for this apparent disconnect. Automation (present and future) and global sourcing are the primary means used by firms to limit compensation costs. Workers seem to have far less leverage than they used to, as union membership declines and structural labor force reform advances. And worker productivity in many markets has been growing slowly; real wages are closely linked to productivity gains.

b) The “Amazon Effect.” E-commerce has made consumers more intelligent, providing heightened means to research products and compare offers. As a result, inflation for goods lags well behind inflation for services in almost every developed market.

Services are now being disrupted by new providers and new platforms, suggesting that their prices, too, will begin to face downward pressure. This seems more like a steady paradigm shift than a sudden level change, so policy makers will have to build this into their inflation forecasts, their inflation targets, or both. Our take on the “Amazon Effect” can be found here.

At the time targeting was developed, it was seen as a tool to bring inflation down. Back then, it was difficult to imagine the price level remaining so subdued for so long. But that is where we are today, and the situation is stressing the architecture of monetary policy.

1. Carry on. There are those who feel there should be a high bar to changing central bank targets. Asset prices and economic contracts are anchored by the consistent expression and pursuit of the current objective; changing it risks unmooring expectations.

But keeping rates lower (or in the case of the European Central Bank, negative) for longer to promote higher inflation invites asset price excesses, which can form as investors reach for return in low-interest rate environments. Financial stability is an unstated objective of every central bank, and policy must try to avoid creating unsustainable conditions.

2. Lower the target. This past March, the Norges Bank lowered its inflation objective from 2.5% to 2%. In doing so, it became the first central bank to mark its target to market. Failing to adjust objectives to reflect underlying realities creates strategic risk. There is growing evidence that the “neutral” interest rate (which neither hinders nor stimulates an economy) has fallen in recent years.

Further, keeping inflation targets too high keeps policy rates too low during expansionary phases. This leaves little room for central banks to react when the next recession comes.

But lowering the target might also have the effect of lowering inflation expectations and long-term interest rates, which could accentuate the reach for yield. It is not clear that financial stability would be enhanced by this strategy.