My commuter train passes through several towns that have high concentrations of financial traders. It’s not hard to spot them; some sport the colorful smocks worn in the futures pits, while others intently scan charts on their tablets, looking for patterns. They’re in early, stoked by strong coffee; and they’re out early, unwinding on midafternoon departures with a cocktail.

During the month of August, you generally don’t see much of them at all. But I sensed that something was up last week when the 5:40 a.m. train into Chicago started filling up well ahead of Labor Day.

The reason for the early returns was Turkey, which stands at risk of a full-blown economic crisis. While the Turkish government has attributed its troubles to a coordinated attack by outsiders, its problems are very much homemade. Whatever the cause, the situation in Turkey has generated concern that extends beyond its borders.

Turkey has always been located on the cusp of the Western and Eastern worlds; its strategic position has only become more important in the last few years, given its border with Iraq, Syria, the European Union, and former Soviet Republics. Its economy, the world’s 17th largest, is deeply linked through trading and financial relationships to a number of others.

For these reasons, the steep decline of the Turkish lira has generated widespread concern. The lira has lost about 40% of its value so far this year, with daily losses of as much as 18%. Investors have extended their anxiety to other emerging markets, although not to the same degree.

Turkish President Recep Erdoğan has insisted that the crisis is the result of a “political plot.” It is true that stress between Ankara and Washington has added fuel: a dispute over a detained pastor led the White House to threaten heightened tariffs against Turkey. But markets are also reacting to imbalances in the Turkish economy and the failure of policy makers there to address them.

Turkey has a history of financial instability. The country required substantial assistance from the International Monetary Fund (IMF) in 2001; unfortunately, the mistakes made 20 years ago have recurred, providing kindling for another crisis.

Turkey’s reliance on foreign capital is the largest among emerging markets, and a substantial fraction of its borrowing is in dollars. These monies were used, in part, to fuel the real estate development that has been central to Erdoğan’s economic agenda. Turkey must renew large blocks of foreign debt over the next several months; investor interest in
those issues will certainly be compromised by recent events. The country’s reserves are
insufficient to cover any slippage. 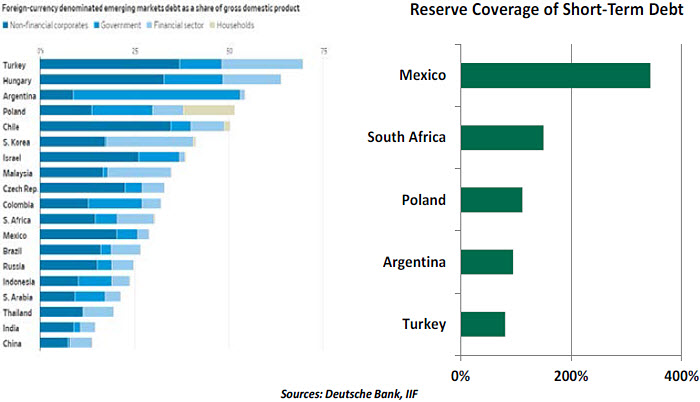 After the last election, President Erdoğan appointed his son-in-law as the head of the finance ministry, and took responsibility for appointments to the central bank’s governing council. The impact of those decisions was almost immediate: the central bank declined to raise interest rates, even though inflation in Turkey is running close to 16%. The independence of monetary and fiscal policy has been compromised, with adverse consequences.

Countries that open their economies to global trade and global capital implicitly agree to oversight from the world’s investors. If policy fails to comport with what asset owners think is sensible, the consequences can be severe. As powerful as Erdoğan has become domestically, his economy is still at the mercy of the markets.

Even if Turkey is willing to admit it needs help, it is not clear who will be there to provide assistance. The IMF would be a logical choice, but the conditions it would insist on (austerity, central bank autonomy and financial reform, at a minimum) may be too much for Erdoğan to bear. In addition, the United States might block any aid unless Turkey agrees to comply with a broader set of demands. China could certainly try to organize relief, but its finances are already stretched. Beijing may also prefer to avoid another confrontation with the United States that could worsen the current trade conflict.

The tone in Ankara remains defiant. Accepting a conditional backstop seems like the furthest thing from the government’s mind. As a result, Turkish debt is trading at a very steep discount; long-term interest rates are over 20%. The unsettled situation is an invitation to bank runs and capital flight, which may lead Turkish authorities to intervene.

Turkey’s output represents only 1.5% of the world’s total. But the tentacles of contagion have been surfacing. Reports suggest that several large European banks have important exposure to Turkey. The flight to quality prompted by recent headlines has led investors toward the U.S. dollar and away from the euro and the British pound; both of the latter have fallen importantly this month.

Some have suggested that the Federal Reserve bears some responsibility for all of this. Rising U.S. interest rates have made some emerging market debt less comfortable; critics have suggested that the Fed hold off on further tightening to avert a worse-case scenario. But keeping rates too low for too long prompted a reach for yield, which may have made Turkish debt attractive to communities of investors who are now experiencing
buyer’s remorse. Unless a secondary shock arrives, we don’t expect the Fed to be deterred
in its effort to normalize policy.

Last spring, my visits with clients revealed a mix of gratitude over market performance since 2009 and nervousness about whether that performance could be sustained. Many of those I spoke to live in fear of a “Minsky Moment,” which would unwind the gains made in the decade since. Amid such sensitivity, Turkey’s troubles have created outsized anxiety.

The reverie and relaxation that normally attends the end of summer has been unfortunately absent this August. I’m hoping that the trains begin emptying out again soon … and that I am among those spending a few more days at leisure.

Developing countries have a difficult choice. Opening their markets to foreigners can bring fresh capital that helps the economy to grow. But international investors can sometimes depart just as quickly as they arrive. In difficult times, countries may contemplate the financial equivalent of closing their borders: capital controls.

Capital controls seek to lock capital in place to avoid disorienting flight. They have been used frequently over history by leading and developing economies alike. Background on the practice compiled by the IMF can be found here. 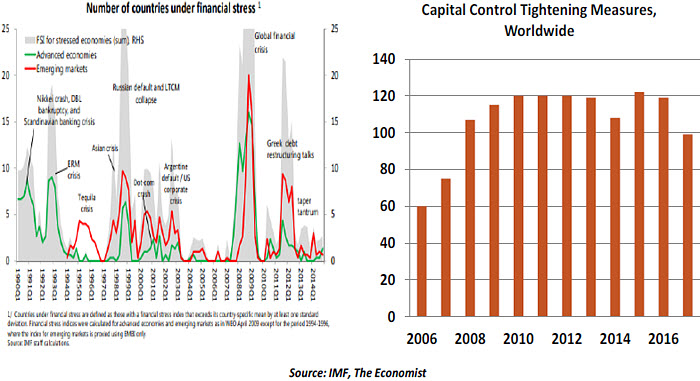 Controls can take a number of forms: ceilings or prohibitions on money leaving the country, restrictions on currency conversion, and caps on asset sales. Investors who enter may be required to stay for a minimum length of time, to reduce flight risk.

In calm times, capital controls can ensure a match between funds that enter a country and the projects they finance (which are often long-term in nature). They can also be used to address concern about foreign influence over domestic markets. During emergencies, controls can buy time to find more lasting solutions. As the previous chart shows, controls have been used more frequently since the 2008 financial crisis.

Measures of this kind are not without their down sides. If implemented suddenly, capital controls can prevent fresh funds from entering the country and add to market anxiety. They represent a concession that the current situation is untenable. Restrictions can freeze a country out of the global capital markets for some time, even after they are lifted.

With Turkey facing substantial debt rollovers in the next 90 days, capital controls would raise the risk of default by those issuers. But other corrective measures, such as raising interest rates to combat inflation and attract investors, would also have severe side-effects and may be ineffective. Parties to Turkey’s troubles will be sweating out what has become a very uncomfortable situation.

Despite one of the best U.S. employment markets in a generation, workers still have considerable insecurity about their jobs. The drive for corporate profitability has firms continually looking for efficiencies, and automation (along with artificial intelligence) threatens to disrupt a number of long-standing occupations.

Anxiety over potential unemployment is understandable; it is costly on several levels. Unemployed workers incur not only the obvious loss of income, but also the costs of seeking jobs, retraining to find work in a new field and potentially relocation.

The nonfinancial stress of living without an income is hard to quantify, but also takes its toll. Communities suffer as unemployed residents reduce their spending. After layoffs, employers must first adapt to working with a smaller workforce, and once they are ready to expand, they incur the costs of recruiting and training new hires.

To reduce these costs to workers and society, and to provide some reassurance to the labor force, some have forwarded job guarantee proposals. Under these outlines, the government would intervene in labor markets to keep people working amid secular or cyclical change. Proposals generally take the form of making a federal job available to anyone who wants one. 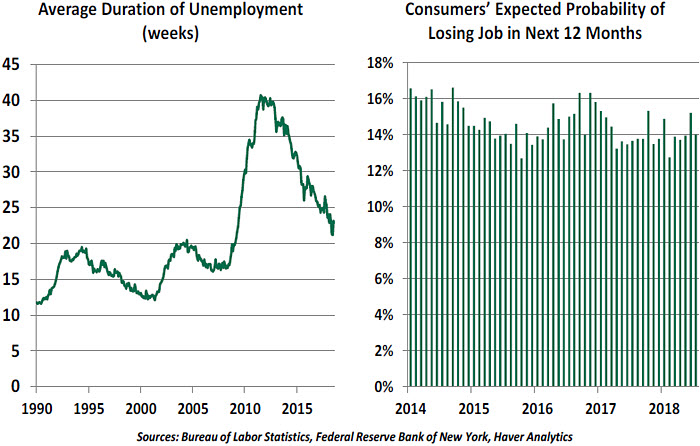 The benefits to the unemployed are clear: A guarantee of work is preferable to the uncertainty of finding their next job. Workers would maintain a standard of living and remain mentally engaged. Communities would avoid the decline that accompanies mass layoffs and may gain a public labor force to work on projects that would not otherwise be funded. And it can be positioned as more of an earned benefit than direct cash payouts like a proposed universal basic income.

However, the expense would be significant. Estimates of direct costs range from $36,000 to $56,000 annually per worker. Total costs would vary with the number of workers in the program. Reduced unemployment insurance payments would not offset the full cost of a guarantee program.

Beyond dollars and cents, we must question whether a job guarantee makes conceptual sense. The unemployment insurance system already in place provides some security to workers between jobs. There is precedent for stimulus to support short-term employment during severe crises. The American Recovery and Reinvestment Act of 2009
extend unemployment insurance and provided funds to create infrastructure jobs. The earned income tax credit is another device that helps those who experience a temporary
decline in their employment fortunes.

Philosophically, workers with some value at risk will have greater motivation to enhance their skills and compete for open positions. Workers holding a guaranteed job may not have sufficient incentives to do well at that job, or to look for something outside of the government umbrella. And true believers in smaller government will find nothing to embrace in the idea of a jobs guarantee.

As a nation, the unemployment rate is hovering near record lows, with more job openings than job seekers. Any qualified worker very likely has a job. Those who remain unemployed today may have other problems keeping them out of the workforce, from illiteracy to addiction. Their problems call for different remedies.

At present, we view the current set of job guarantee proposals as more populism. They are unlikely to be enacted amid a strong economy and concerns about deficit spending. We’ve experienced substantial industrial shifts in the past, and always adapted well. Those shifts may be coming faster and more furiously, but remedial efforts might better be aimed at facilitating those transitions for both individuals and the economy as a whole. Making it easier for workers to retrain and relocate would be a good start.

Should the next economic downturn be accompanied by a large upswing in unemployment, the idea of job guarantees may resurface. Unless policymakers come up with a sound alternative before then, the idea may gain steam.