India Works To Unlock Its Potential

Negotiating the rush-hour traffic of Bangalore is a complex, stressful task requiring exceptional maneuvering skills. But driving isn’t the only complex and time-consuming activity in India. The same could be said for the challenge of steering the Indian economy towards its great promise and away from the peril presented by the population’s varied tastes and preferences.

Economic reforms, initiated in 1991 and continuing today, have contributed to India’s rise as the world’s fastest growing major economy. With a gross domestic product (GDP) of $2.6 trillion last year, the country ranks as the sixth largest economy in the world. Yet in terms of GDP per capita, India is ranked a disappointing 126th. Structurally, the services sector is the backbone of the Indian economy, accounting for 57.1% of GDP. Services make up a sizeable share of Indian exports at 38%, much higher than in other major economies. 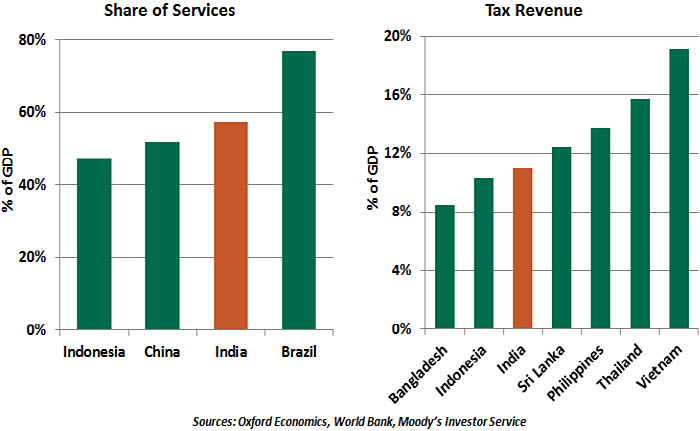 Tax reform has been a focal point. India has historically fared quite poorly when it comes to tax collection. Small transactions are a factor: the average transaction value per user was only $9 in 2016. The demonetization of 2016 punished tax evaders who did business exclusively in cash. Banknotes of ₹500 ($7.50) and ₹1000, accounting for 86% of cash in circulation, were replaced by new ₹500 banknotes and a higher denomination banknote of ₹2000 ($30).

Demonetization enabled the income tax department to collect taxes from individuals and entrepreneurs who had previously kept their cash outside the banking system. This was followed by a rather hasty implementation of the Goods and Services Tax (GST), adding to economic stress. Despite the initial challenges, the GST looks to be a promising reform, as all 29 states in India are now a common market. According to the Economic Survey 2018, four million additional tax payers have registered since demonetization, while the GST has resulted in a 50% increase in new taxpayers.

The ease of doing business was a major issue in the 2014 election. Some red tape has been eliminated, but there is still a long way to go. India still ranks quite low (#81) in Transparency International’s global Corruption Perception Index.

The economy has recovered from these shocks and has regained its former growth trajectory. Industrial production is improving, and the stock market has been strong. Acceleration in domestic demand and a resilient global backdrop should remain supportive in the near-term.

Despite enhanced focus, India’s infrastructure continues to remain an impediment to productivity growth. A recent study by Standard & Poor’s concluded India will need another $4.5 trillion over the next 25 years to build infrastructure commensurate with its economy. Poor infrastructure impedes movement of goods, and as such, the manufacturing sector hasn’t gained much from government initiatives such as Make in India yet. India differs notably from China in this respect, as China’s manufacturing capabilities and supporting infrastructure have led its economic growth.

Agriculture is a serious business in India, even though its share of economic output has declined to 15.5% from over 50% in 1950. Though the Indian economy has diversified, agriculture still accounts for more than 50% of total employment, followed by 30% in services. Farmers in India have long dealt with rising production costs, shrinking land ownerships, low productivity and abrupt price variations. These factors explain the relatively small trickle-down influence on the broader economy despite higher growth rates over the years. 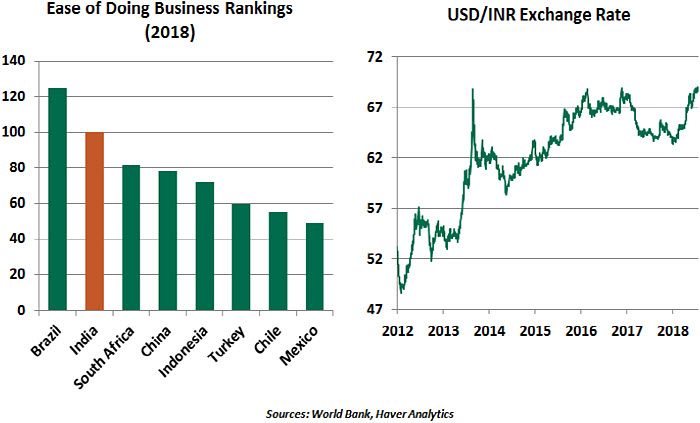 India will continue to be tested by its energy dependence; 85% of India’s oil is imported. The rupee, amid broader emerging market currency stress, has weakened 7% against the dollar since February. India’s vulnerability to higher oil prices is only contributing to this movement.

Deregulation of motor fuel prices (gasoline in 2010 and diesel in 2014) has helped the government lower its subsidy expenditures, but its dependence on oil remains a key concern for the government in the run-up to 2019 elections. According to the Economic Survey 2018, “a $10 per barrel increase in the price of oil reduces economic growth by 0.2-0.3 percentage points and worsens the current account deficit by about $9-10 billion dollars.” Foreign exchange reserves have also declined steadily by $21 billion from a peak of $426 billion in mid-April.

Though Modi looks set to form the government in 2019, it is likely to be with a weaker mandate amid rising domestic and elevated geopolitical concerns. These many challenges can cause a casual observer to lose sight of India’s tremendous economic progress over the past three decades. As stated by Chanda Kochhar, CEO of ICICI, India’s
largest private sector bank: “Everything takes time for the real impact to get translated to
the economy.”

India continues to attract global players due to the presence of many industries and investment avenues. Its large, young population drives both demand and supply of manpower.

Economics is proving to be nearly as challenging as driving an automobile in India. Regardless of which party wins in the 2019 elections, commitment to a reform agenda will hold the key to unlocking the full potential of India’s long-term growth story.

A Backward Look at U.S. GDP

The U.S. gross domestic product (GDP) grew at an annualized 4.1% rate in the second quarter of this year. Along with this quarter’s estimate, the U.S. Bureau of Economic Analysis (BEA) conducted a comprehensive, retrospective update of the GDP calculations, as it does every five years. Though they receive less fanfare than the headline rate, these data and methodology updates are a vital part of maintaining a current view of economic performance.

Seasonal adjustments were a focal point. The exercise is intuitive: certain sectors have predictable patterns throughout the year. Retail sales are strongest in December, owing to the holiday season; housing is strongest in the spring. To derive a reasonable picture of annualized growth, these intertemporal factors must be adjusted for. 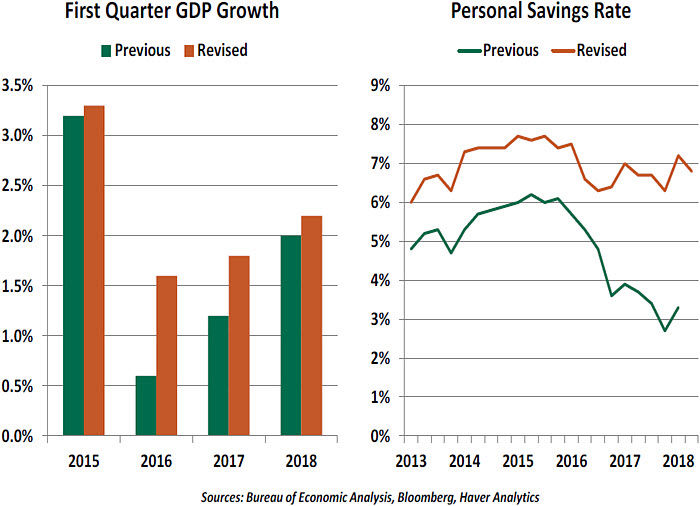 Under the old measurement regime, the first quarter of each year showed slower growth than other quarters. One suspect was “residual seasonality,” the failure to properly account for factors that suppress activity in the first three months of the year. With the 2018 update, the BEA completed the third and final phase of a three-year project to correct this problem. Seasonality adjustments are now applied to services, inventories and government spending, replacing monthly moving averages. First quarters now look stronger, and other quarters have lower peaks.

One revision came as a surprise: Americans appear to be saving more than was previously estimated. The reallocation of some income from businesses to individual small business owners increased aggregate measures of consumers’ disposable personal income and savings. The national saving rate was revised to 6.7% from more worrying measures below 4%. The aggregate figures do, however, mask inadequate saving among a broad swath of the American population.

The BEA is continually monitoring new data sources and seeking opportunities to improve. The new seasonality methodology will be put to the test in first quarter 2019, and we economic forecasters will do our best to show growth rates reflecting it.

The good reading for second-quarter U.S. GDP growth was widely anticipated by market observers. Much discussion subsequently revolved around how long these strong figures can be sustained. While growth above 4% is not likely to hold, there are those who insist that 3% growth can become the new norm. Indeed, when the Tax Cuts and Jobs Act of 2017 was ratified, it was premised on an increase to GDP growth that would offset the loss of tax revenues and risk inflating the deficit.

The CBO has published much detail about its calculation of potential output, defined as the amount of real GDP attainable if domestic inputs of labor and capital are employed at their maximum sustainable rates. Potential GDP reflects the supply of inputs (labor and capital) available to the economy as well as a projection of the demand for the outputs of the economy.

Labor’s contribution is derived from the country’s total population multiplied by the labor force participation rate and adjusted for a natural rate of unemployment that is difficult to pinpoint. Though the U.S. population is growing, it is also aging, a common challenge for mature economies. The U.S. has had the advantage of attracting a high volume of immigrants, who help to keep the labor supply young and productive. As stricter immigration controls are debated, the economic value of incoming workers should not be forgotten.

Capital supply is less of a concern for the U.S., a rich country with well-funded banks and a thriving market for stocks and bonds. Financing is available for companies to make capital investments.

Labor and capital, put to productive uses, create GDP. Output per worker is commonly known as productivity. Workers become more productive as they gain education, experience and access to technology that helps them perform their jobs.

Productivity can also improve due to harder-to-measure factors beyond capital and labor. Known as “total factor productivity,” this measurement captures the economy’s overall efficiency, including gains from innovation, infrastructure, fiscal policies and investment in more productive sectors.

Productivity in the United States has been stagnant. Business investment was muted during the early years of the current expansion, while recent technology innovations have not produced the burst of efficiency that many expected. Future productivity will be tempered by the lower experience level of younger workers. Proposed investments in infrastructure have not generated much interest in Congress.

With labor force growth slowing and productivity growth slow, potential growth has fallen. Furthermore, potential GDP growth is not actual GDP growth. The CBO has found that actual output has fallen short of potential output for prolonged periods following economic downturns. As such, the CBO estimates total GDP will grow at a rate of one-half of one percent below its potential rate.

This week, we witnessed Treasury debt sales that exceeded forecasts, as the U.S. government runs substantial deficits in spite of good economic conditions. An economy growing at 3% will raise sufficient tax revenue to keep the country’s debt in check; at 2% growth, trillion-dollar deficits and more debt will become the norm, regardless of the country’s potential.