President Trump and his chief economic adviser, Larry Kudlow, have publicly questioned the Federal Reserve’s recent rate hikes. These assertions break with decades of custom and, if they continue, would be at odds with the goals shared by the president and the Fed.

We have come to expect an independent central bank, but the value of that arrangement has not always been clear. When the Federal Reserve was first chartered, the Secretary of the Treasury and the Comptroller of the Currency had ex officio seats on the Federal Reserve Board. During World War II, the Fed supported the United States’ war effort by fixing low interest rates in order to minimize the government’s cost of debt. However, persistently easy money supply led to substantial postwar inflation. In 1951, the Fed asserted its full control of monetary policy with the Treasury-Fed Accord.

Even then, the executive branch would sometimes intervene. Fearing a recession, President Nixon counseled his Fed chair to hold rates low to keep the market stimulated, which led to problematic inflation throughout the 1970s. It took the willful leadership of Fed Chairman Paul Volcker (and a painful recession) to get inflation under control. A central bank that can be swayed is one that can do damage to the economy in the long run.

The timing of the current administration’s remarks is questionable. Two years of steady rate hikes have not yet impaired the economy. Interest rates remain below the long-term averages we saw before the financial crisis. 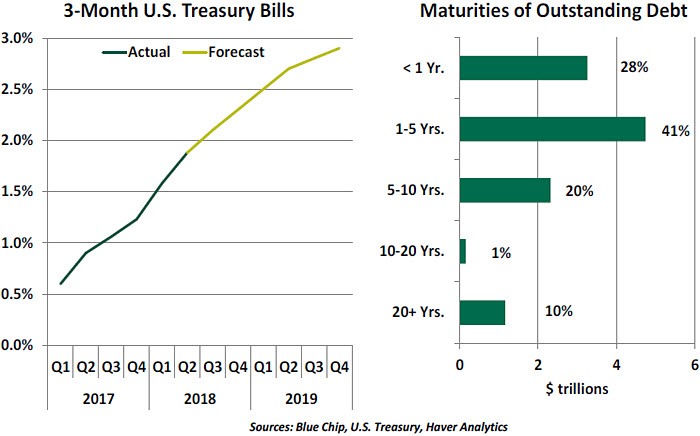 One possible motivation may be that the U.S. Treasury feels the most immediate pain from higher rates. The budget deficit is growing, and a majority of federal government debt is in short-duration instruments which need to be refinanced continually. But it is the Treasury’s choice to rely on short-term borrowings; a strategy focused on longer-date issuance would have left the budget better protected against the inevitable normalization of monetary policy.

We do not expect comments from the White House to sway the steady, well-telegraphed rate course of the Fed. The administration might be better advised to focus on matters more directly under its control, the sound handling of which would make the Fed’s job a little easier.

At the beginning of every year, I resolve to watch less television and read more. Not business articles, mind you: I consume quite enough of those already. My hope is to read more literature, fiction and non-fiction, that broadens horizons and perspectives. Each January, I order a series of books to reinforce my commitment.

Unfortunately, I have piles of unread tomes both at work and in nearly every room of my house. Other priorities always seem to arise that limit my reading time. With only a few moments left each evening for decompression, I fall back into old habits and grab the remote control.

China is presently backing off on its resolutions and falling back into old habits. Spreading trade friction is leading the country away from financial reform and back toward an overreliance on credit. This may produce a short-term boost, but it will have long-term consequences.

China has been able to sustain high rates of economic growth for much longer than other developing economies. Real gross domestic product (GDP) is still increasing at an annual pace of more than 6%, at least as reported by Chinese authorities. There are certainly those who doubt the readings, but even if some haircut is applied, progress has been impressive.

External observers suspect that China needs to sustain rapid growth in order to maintain political stability. Chinese universities are graduating 7 million students each year, and the government is seeking to move about 20 million people every year from the countryside to cities. Both of those communities will be expecting employment; the
failure to provide it could foment discontent. 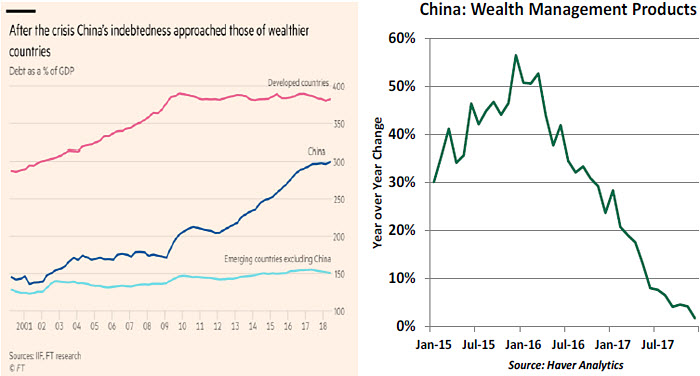 Maintaining the pace has required increasing amounts of credit. The sum of Chinese governmental, corporate and household debt has more than doubled over the past ten years and now stands at an estimated 300% of GDP. While the level of debt is similar to that of the United States, the rapid rate of increase has been a source of concern.

Further, some of the expanding leverage has been provided through vehicles that are not fully transparent. Wealth management products (WMPs) are sold by Chinese banks but not always guaranteed by them; while the instruments pay a fixed interest rate, they are backed by a wide range of risky loans and securities. There are an estimated $4.6 trillion of WMPs outstanding, which could be kindling for contagion if the Chinese economy falters.

Internal and external observers have become increasingly worried that China might have a “Minsky moment,” a market collapse born of investor complacency and lots of leverage. To head this off, a plank on financial reform was included in the platform approved by the Communist Party Congress last October. Endeavoring to move from “high speed growth to high quality growth,” China reinforced financial oversight and adopted new regulations covering shadow banking and real estate.

The effort showed some early returns. Growth in WMPs came to a standstill, a cleanup of bad debt was initiated, and growth in credit began to moderate. There have also been signs that China has slowed the progress of its Belt and Road Initiative, under which it extended credit to other countries for infrastructure development.

And then the trade battle began. New tariffs are, for now, a small fraction of what has been threatened. But the tone between China and the United States has been anything but conciliatory, leaving the possibility of more extensive restrictions.

Debate continues on who is best positioned to withstand multiple rounds of tariffs. We offered our thoughts in a recent piece entitled “Who Will Blink First.” Both sides will end up losers: according to recent work by Oxford Economics, a full-blown trade war would reduce U.S. and Chinese real economic growth by 0.7% to 0.8% next year. But while U.S.
equity markets have held their value fairly well, Chinese equities have fallen importantly
since the beginning of the year. 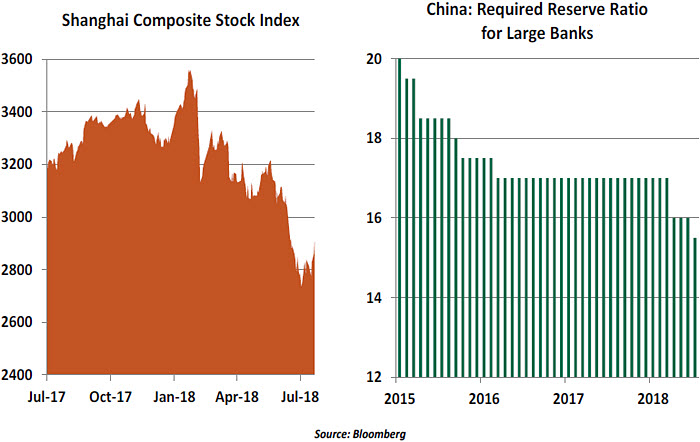 Each side has taken steps to ameliorate the discomfort. As an example, Washington announced a $12 billion farm support program this week that aims to offset the hindrance of Chinese tariffs on soybeans and other crops.

China’s efforts to limit downside are focused on easier credit. The central bank recently reduced bank reserve requirements for the second time this year, and has injected additional amounts of funding into the financial system. Liquidity requirements have been relaxed. Investors are reportedly being encouraged to purchase lower-rated corporate bonds. Heavily indebted state-owned companies, which have been targets for financial reform, may be in line for more lenient treatment.

These measures are expected to produce the desired short-term outcomes for China. Growth projections remain robust, and Chinese equity markets have firmed. But this comes at the cost of delaying or retreating from the financial reform recommended at last year’s Party Congress. This raises the risk of a disorderly unwinding.

Writing in The Financial Times, Martin Wolf observed that “The salient characteristics of a system liable to a crisis are high leverage, maturity mismatches, credit risk and opacity. China’s financial system has all of those features.” Chances are Chinese authorities are aware of this, but they fear the short-term consequences of faltering growth more than the potential for a crash sometime in the future.

I have a vacation coming up next month, and I am planning on bringing a few non-financial books to read. I hope the mental sojourn will allow me to return to the office with fresh perspective. Given what might lie ahead of us, I am going to need it.

Chinese policymakers have a long history of interventions to ensure that the value of the Chinese yuan (CNY) aligns with China’s broader economic goals. Foreign exchange (FX) management is a key pillar of China’s trade strategy; keeping the CNY low promotes Chinese exports.

Over the years, China has taken a lighter touch. The People’s Bank of China (PBoC) seeks to have the CNY move “with reference to” a basket of currencies. Two years ago, this approach won the yuan a place in the International Monetary Fund’s Special Drawing Rights basket, a significant step. During episodes of appreciation from mid-2016 through the end of last year, policymakers refrained from intervening in the FX market, allowing the exchange rate to be determined largely by market forces.

Beginning in April, the CNY began a steady decline. In June, the Chinese currency suffered the largest month-on-month depreciation against the U.S. dollar (USD) in almost two-and-a-half decades. In fact, the USD/CNY rate is now closer the level where it was pegged between 2008 and early 2010.

The CNY’s slide against the backdrop of escalating trade tensions and fears over a resulting slowdown in growth has certainly brought focus back to the role of Chinese policymakers. While some are already seeing this as an engineered outcome, market forces may be the main culprit. China’s is not the only world currency to take a hit relative
to the U.S. dollar as a result of uncertainty over tariffs; given its reliance on exports, it is not
surprising to see the yuan as especially vulnerable.

Further, an “engineered” devaluation of the currency might not be in China’s best interests. Though a weaker currency will act as a cushion against the U.S. tariffs and bolster Chinese exports, the benefits will be accompanied by costs.

It is widely believed that allowing the CNY to weaken too much would make dollar-denominated assets more attractive, leading to capital flight and an increased risk of financial instability. As it stands, Chinese policymakers are already taking some risk by easing up on credit (see previous article), leaving little appetite to create a new entry point for instability. The likelihood of this happening is tempered by strict capital controls. But allowing or engineering further CNY weakness is unlikely. 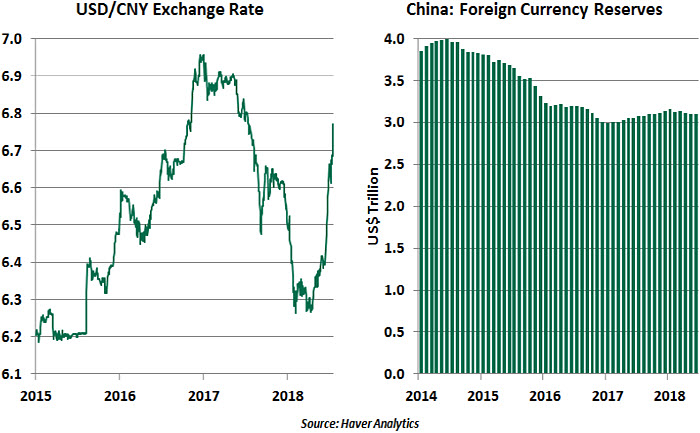 Perceptions play an important role. Chinese authorities are trying to build a track record
of non-intervention in the context of their commitment to reforms. Moreover, CNY weakness has already drawn the ire of President Trump, who has frequently accused China of depressing its currency. The U.S. Treasury has the power to declare China a currency manipulator, which would open a broader range of retaliatory measures. A
weak currency would increase import prices and bolster exports. This would undermine
the policymakers’ long run objective of moving away from export-led growth and toward
a higher domestic consumption-driven economy.

So for this series of reasons, a declining currency may be as much of a concern to the Chinese as it is in Washington. In fact, the PBoC may be faced with the challenge of preventing further depreciation, which could be an expensive endeavor. Supporting the CNY required $1 trillion of reserves in 2015 and 2016.

Still, some audiences may see a depreciating CNY as a measure to fight the effects of the tariffs. And Chinese authorities will be at risk no matter what they do (or don’t do). Much like the trade conflict itself, this is a no-win situation.