Bitcoin Miners See a Bullish Breakout on the Horizon The price of bitcoin surged above $8,000 on Tuesday for the first time since May after the Group of 20 (G20) meeting in Argentina concluded last weekend with little urgency to take regulatory action on cryptocurrencies. In a communiqué, finance ministers and central bank governors expressed confidence that the technology underlying alt-coins “can deliver significant benefits to the financial system and the broader economy.”

Many of these benefits were discussed in my interview with Marco Streng, cofounder of Genesis Mining, the world’s largest cloud bitcoin mining company. Genesis had a huge win this week as securities regulators in South Carolina dismissed their cease-and-desist orders from March. The move, according to CoinDesk, marks the first time the state dropped such orders against a blockchain startup. Further support came courtesy of a July 16 report by the Switzerland-based Financial Stability Board (FSB), which concluded that, “like crypto-assets in general, crypto-asset platforms do not pose global financial stability risks.” Trading platforms include Coinbase—the most popular by far—Bitfinex, Kraken and many others.

From its low of $5,850 in late May, bitcoin was up nearly 44 percent on June 24 before pulling back on the Securities and Exchange Commission’s (SEC) decision not to approve a bitcoin ETF filed by Cameron and Tyler Winklevoss. (Today it was back above $8,000.) I believe bitcoin’s fundamentals are lining up for a significant move higher, its price having already broken sharply above the 50-day moving average.

Keep in mind, though, that we’re still very early in crypto investing. It was only 10 years ago that the mysterious Satoshi Nakamoto wrote the now-famous whitepaper that led to the creation of bitcoin. Volatility is still roughly six times as high as large-cap stocks and gold in a single trading session, and 11 times as high in the 10-day period. As I told Market One Media last week, the space remains speculative, but there are opportunities for tremendous upside. Among the most bullish signs is bitcoin’s rapidly surging hash rate. In simple terms, a “hash” is a calculation made by a bitcoin miner in an attempt to secure a block reward, which currently sits at 12.5 bitcoin per block. (The reward automatically halves every 210,000 blocks. At the present mining rate, the next halving is estimated to occur in May 2020, after which the reward will drop to 6.25 coins.) The “hash rate,” then, is how many calculations are made per second across the globe. It generally reflects the pace at which new miners are joining the network.

Every 10 minutes on average, a new block is mined, meaning 1,800 bitcoin—or $14.8 million at today’s prices—are created every day of the week. Blockchain technology, remember, guarantees the validity of these new virgin coins. Imagine if stock trading were as quick, efficient and worry-free as crypto-mining. You can see now why JPMorgan, Citigroup, Bank of America and other big banks are rushing to patent blockchain processing systems of their own.

Look at the chart below. The bitcoin hash rate has continued to grow at an astonishing pace despite the selloff, suggesting miners are still very bullish on future prices. This month, the number of operations passed above 45 trillion per second for the first time ever. That’s a more than sixfold increase in power from only a year ago. It also signifies a huge recovery after extensive flooding in Sichuan, China knocked out significant amounts of hashing power in late June and early July.

Speaking of bitcoin mining power, critics often like to point out how much electricity the network consumes, in an effort to turn public opinion against the industry. To be sure, mining bitcoin and other cryptocurrencies requires a lot of energy, but the figures you might have seen are highly exaggerated. Some sources claim that industry demand stands at 65 terawatts per hour (TWh), or 65 trillion watts per hour, on an annualized basis. But a more accurate estimate is closer to 35 TWh, “less than the annual energy consumption of Luxembourg, a country of 585,000 people,” according to CoinShares Research analysts Christopher Bendiksen and Samuel Gibbons.

How did Bendiksen and Gibbons arrive at this figure, and why is it so drastically lower than other estimates? The analysts point out that hardware efficiency is nearly doubling every year (81 percent), while the cost of hardware is almost cut in half on an annual basis (-48 percent). This means miners are increasingly able to do much more for much less. Miners also prefer to operate in colder climates, which lower cooling costs, and they largely rely on cheap green energy. This is part of what attracted me to HIVE Blockchain Technology, which conducts most of its business in Iceland and Sweden.

“Our total findings suggest that the bitcoin mining industry is relatively healthy, profitable and continues to grow at breakneck speeds,” Bendiksen and Gibbons write. “The hash rate is tripling on an annual basis while the efficiency of the hardware is rapidly increasing and costs are coming down.”

You Can Now Trade Crypto Securities on Coinbase. When Will We Get an ETF?

Investors have a growing number of options to gain exposure to bitcoin and cryptocurrencies, besides buying the actual assets themselves. There are several publically traded companies that have begun integrating blockchain technology into their business, such as IBM and Hitachi. Other firms have direct involvement in mining cryptos—HIVE Blockchain, for instance, and China’s Bitmain, which is seeking $1 billion in financing before a possible initial public offering (IPO). Bitcoin futures are available for trading on the CME and CBOE. And Coinbase just received SEC approval to “move forward with a trio of acquisitions that could allow it to become one of the first federally regulated venues for trading digital coins deemed to be securities,” according to Bloomberg. 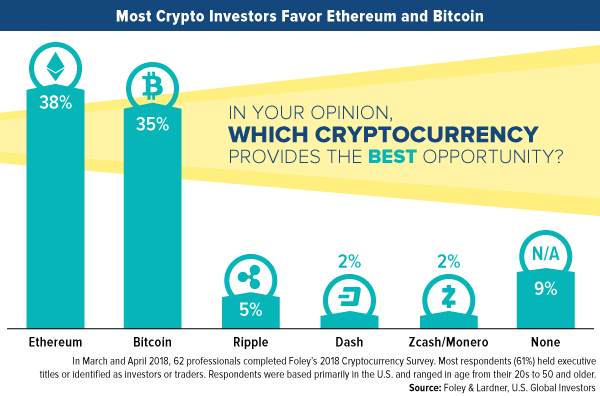 But so far a bitcoin ETF has not yet been made available. I believe that once such a product comes on the market, the price of bitcoin will really take off.

Just look at the chart below. Gold traded mostly sideways throughout the 1980s and 1990s. Then in March 2003, the first gold ETF appeared, and the price of the yellow metal skyrocketed 420 percent as trading became more liquid and streamlined. I can’t say bitcoin would respond likewise, of course, but a crypto ETF would certainly attract more curiosity to the space. There’s no lack of investor interest in a bitcoin ETF. A recent survey conducted by international law firm Foley & Lardner found that nearly three quarters of participants, 72 percent, were hopeful they’ll have the opportunity to invest in an ETF that holds bitcoin or other cryptocurrencies.

As I mentioned earlier, the Winklevoss twins have now made two (unsuccessful) attempts to bring one to market, and the SEC has said it will postpone making a decision on five other proposed ETFs until September. Even if these get struck down as well, we move closer to getting one every day.

HashFlare Drops Its Contracts Amid Scandal

Cloud mining is one portion of the cryptocurrency mining landscape that can be a bit tricky to understand because there’s potential for fraud. One example is with the recent scandal around cloud mining platform HashFlare, which announced July 20 that it dropped its mining service of certain bitcoin contracts pursuant to a clause in its terms of services.

HashFlare failed to produce payouts higher than its maintenance fees for 28 days in a row, activating the clause for the conclusion of its contracts.

News such as this is positive for companies like Genesis and HIVE Blockchain—both reputable miners.

Voters Insist on Streamlining of Regulations and Accountability from Government Officials

One final thought. In my observations at conferences and by reading news headlines, I see a global pushback taking place against entrenched, big-government bureaucrats. Each country has its own dynamics. Even when some of the headlines are hard to stomach, I believe this development is generally a positive thing and am bullish on it.

The pushback isn’t limited to President Donald Trump. Disruptors are being voted in and assuming power all over the world—Narendra Modi in India, Xi Jinping in China, Giuseppe Conte in Italy and now

even in Canada. Yesterday, Ontario Premier Doug Ford unexpectedly announced he would slash the number of Toronto’s city council positions nearly in half, from 47 to 25, in an effort to shrink the size of the government. This is significant, as Toronto is the fourth-largest city in North America following Mexico City, New York City and Los Angeles.

This all comes back to taxpayers wanting accountability from regulators and government officials. Who is going to help represent them to achieve that? If regulators aren’t facilitating growth, particularly in non-government roles, then they should be held accountable. It seems that voters are demanding this more and more, and in a growing number of places around the world. This week spot gold closed at $1,222.93 down $9.07 per ounce, or 0.74 percent. Gold stocks, as measured by the NYSE Arca Gold Miners Index, ended the week lower by 2.03 percent. Junior-tiered stocks outperformed seniors for the week, as the S&P/TSX Venture Index came in off just 0.70 percent. The U.S. Trade-Weighted Dollar Index rose this week by 0.20 percent.