Agriculture Around the World

Vaibhav Tandon looks at the state of global agriculture, in the wake of advancing trade protection.

Sunday morning coffee conversations with my wife sometimes pivot around post-retirement plans, even though I’ll be working for another three decades. Most of those conversations involve farming as part of our lives after retirement. For my wife, farming represents a simple, bucolic ideal where days are slow.

But for many around the world, farming is a serious business. Not only is it vital to food security, but it also represents a sizeable share of some nations’ gross domestic product (GDP). Globally, the industry is valued at around $12 trillion by The Business Research Company. But agriculture has been the focus of a number of recent trade restrictions, creating doubts for both producers and consumers. Some perspective on this critical economic sector is therefore warranted.

The share of agriculture in world GDP has steadily declined over the last two decades. Overall, agriculture accounts for only 3.5% of world GDP, down from 8.3% in 1994. As national economies diversify, urbanize and industrialize (a pattern described in Rostow’s stages of economic growth), manufacturing and services rise. In high income countries, agriculture represents just 1.3% of GDP compared to 8.4% in middle income countries and 26.3% in low income countries.

But agriculture still has a strong hold on the hearts and minds of citizens around the world. The farm sector accounts for more than one-fourth (26.5%) of total global employment. 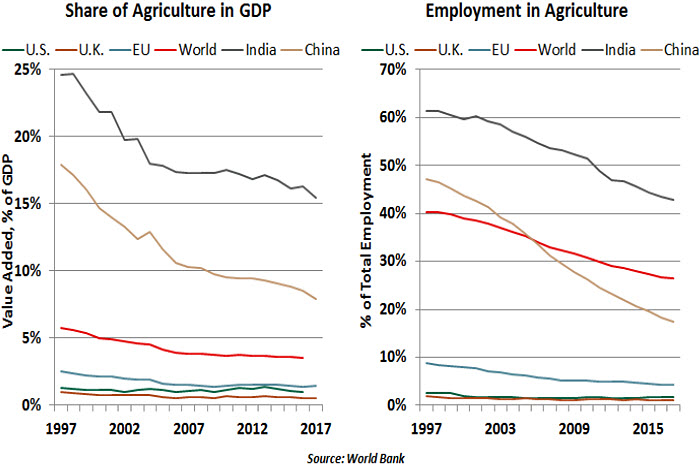 Feeding the population is a basic and central goal of an economy, and having the security to fulfill that goal in all circumstances is elemental. As a result, agriculture punches above its weight in the political arena in countries around the world.

Food also plays an important role in monetary policy. Like energy, food prices (particularly those of unprocessed food) are known to be quite volatile due to food’s perishable nature, high demand and dependence on weather conditions. Huge swings in prices of agricultural products can lead to a change in direction for central banks in emerging markets (EMs) such as India, where the food component alone accounts for almost half (45.9%) of the consumer price index (CPI) basket.

By contrast, the relative importance of food in developed market CPI baskets is quite low, generally less than one-fifth. Yet large price swings can be prove to be a drag or driver of inflation. For instance, in the eurozone in 2014, food prices depressed inflation more than energy did. In Japan, the price stability target is gauged on the CPI ex-fresh food measure and not the overall CPI. 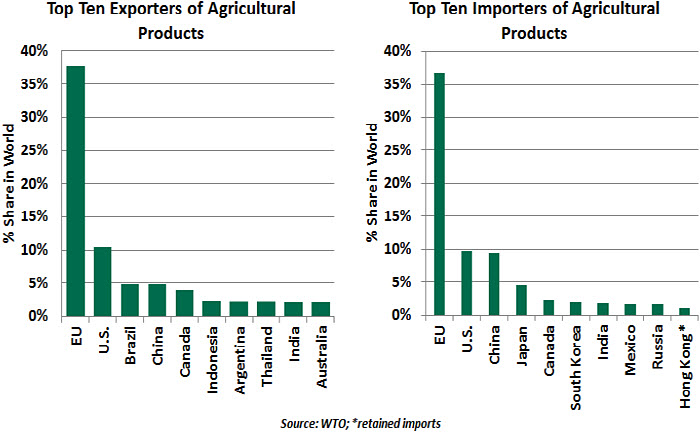 Food security continues to remain a central issue for a lot of countries. As populations grow, food production must increase to meet their basic nutritional requirements. Food insecurity has often triggered violence and instability in countries. This was most recently illustrated in Venezuela, where a food crisis led to rise in food trafficking, violence and even deaths.

Another challenge for many low- to middle-income countries is finding a balance between food security and foreign access to agriculture markets. Agriculture is perhaps the most heavily subsidized sector in the world. The subsidies are aimed at helping farmers produce sufficient quantities, acquire modern farming tools and techniques and
achieve protection from price volatility. Opening borders to agricultural imports too soon
may leave the domestic industry immature and unable to respond if international sources
are not available.

Subsidies given to the farm sector are often large. In the European Union (EU), expenditures under its common agricultural policy amounted to around €50 billion in 2016 and 2017, equivalent to around 41% of the total EU budget. Adverse weather conditions such as droughts or floods can often lead to escalation of these expenditures by the exchequers.

Politics cannot be separated from agriculture. Farmers are an electorally active population with outsized political power in many countries (Japan’s farm lobby, for example, is a potent force in politics). Lower yields or crop prices are not only hurtful to the farmer’s incomes, but also tend to have a spillover effect on the broader economy, from banks writing down losses on farm loans to broader food shortages.

Policy measures used by various governments to protect or promote their agriculture industries include increased input subsidies (particularly for fertilizer and fuel), preferential access to credit and minimum prices. But tariffs and quotas on agricultural products are used liberally around the world to shelter domestic farmers.

Rising trade tensions globally are a cause of concern for the flow of agricultural commodities. As barriers rise, farmers in the targeted countries may cry out for support, while those who might pick up additional demand scramble to reorient production. In particular, Chinese tariffs on the U.S. soybean crop could bring “serious damage to U.S. farmers” but might prove to be beneficial for growers such as Brazil and Argentina.

Several agricultural products that have been focal points of the spreading trade conflict can’t be easily substituted, though. For example, China will diversify its sources of soybeans, but it is unlikely to fully cease importing from the United States. For those products, higher tariffs almost certainly mean that consumers around the world end up paying more for necessities.

So the atmosphere around farming is quite uncertain at the moment. I mentioned this to my wife during our most recent breakfast chat about retirement. In the end, we may end up staying in the city for longer than we originally thought.

As in most countries, the U.S. government heavily subsidizes farming. Compared to other government interventions, subsidies to maintain an ample supply of food at predictable prices are easily defensible.

As they fulfill a fundamental need, farmers are a politically powerful group. Their votes are courted aggressively, and they receive sizeable legislative support from a variety of channels. But measures meant to protect farmers demonstrate the unintended effects of market interventions.

For example, the sugar quota continues a long-running intervention in the domestic sugar market. U.S. sugar import tariffs date to 1789, while the first sugar quota was ratified in 1934. These actions raised the price of sugar by limiting the supply of imports, which supports U.S. sugar farmers. While public health advocates may not be upset by more expensive sugar, consumers would prefer the lower costs that would accompany a free sugar market.

The sugar quota has led to second-order effects. The higher cost of sugar led to the substitution of corn syrup as a sweetener, giving the corn industry a stake in maintaining the sugar quota. Meanwhile, the reduced supply of sugar has limited innovations in the U.S., such as Brazil’s adoption of sugarcane ethanol as a vehicle fuel.

Crop insurance is another example of a government-sponsored program that has grown beyond its intent. These insurance policies were initially designed to allow farmers to withstand losses from occasional bad harvest seasons caused by flooding or droughts. It has since grown in complexity. Crops can be insured against not just poor yields, but also poor revenue. Farms that do not make their typical earnings in a given year are insured against losses, using policies that are publicly subsidized. Over the past decade, farm insurance settlements paid by the U.S. Department of Agriculture (USDA) have ranged from $4 billion to $11 billion per year, in addition to other subsidies including direct payments to farms.

Consumers foot the bill for agriculture subsidies through federal taxes, but this is not the only way costs are felt. Agriculture is a primary driver of inflation. Food price increases are felt immediately, as most consumers do not grow their own food and cannot defer purchases for long.

Food prices are also driven by the cost of energy. Modern farming is an energy-intensive effort, requiring heavy equipment in the fields and fleets of trucks to move harvested crops. Many fertilizers are petroleum-based, as well. Rising oil prices will lead to higher food costs. 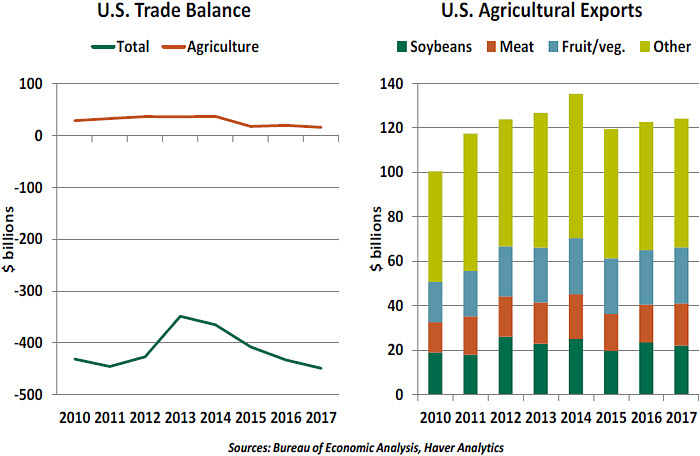 Given the agriculture industry’s size and importance, its public policies often grow in complexity. The USDA provides more than simple farm support. Its programs include mortgage insurance to rural residences and the Supplemental Nutrition Assistance Program (SNAP), which provides basic food necessities to the poorest residents of the country. Indeed, the farm support bill currently before Congress has been held up on a debate over modified requirements for SNAP eligibility.

The U.S. agricultural market is experiencing uncertainty as tariffs loom large. New tariffs (both threatened and in place) have targeted the categories that lead U.S. exports. China has held to its commitment to respond in equal proportion to U.S. tariffs. Last week, China responded to U.S. tariffs of $34 billion on industrial supplies with a similarly sized action, targeting agricultural outputs like soy, pork and orange juice.

Producers expecting to export their crops may find that tariffs have rendered their export channels unprofitable. Prices in the normally quiet market for soybeans illustrate the new uncertainty. Farmers must plan their crops a season in advance and cannot quickly pivot to market changes. Domestic demand is stable, and it is unlikely U.S. consumers’ tastes will adapt to absorb a glut of, for instance, sorghum. This week, farmers reported cancelled orders of grains meant for China, a trend likely to become the norm.

Even products that escape explicit retaliation will feel the tariffs’ effects as markets adapt. For example, soybeans that can no longer be exported profitably may be sold to animal farms as feed stock, but this introduces competition for feed corn. Ultimately, prices across the board may fall, presenting a small benefit to domestic consumers but a major pain to farmers.

As crop insurance policies are often written on the basis of protecting revenue, not crop volume, this will leave U.S. taxpayers liable for more subsidies to farmers. Farmers can adapt to the loss of export capacity, but it will take years of steady trade conditions to do so.

The industry faces policy challenges beyond the collateral damage from trade negotiations. Much work in farming cannot be automated, especially at harvest time. The U.S. relies on thousands of temporary migrant workers, most frequently from Mexico, to work during harvest seasons and return home afterward. The current administration has adopted a tough stance on all aspects of immigration, even when done through legal means. Farmers reliant on temporary immigrant workers reported lost crops due to delays in processing their workers’ visas in the 2017 harvest. We have no reason to expect more leniency in the current harvest season.

Ultimately, the U.S. is a nation of well-stocked grocery stores. Despite some inefficiencies, agriculture policy has helped the country exceed its food needs, and the agriculture industry’s continued success has allowed it to become an export power. Trade actions that put a target on the agriculture sector will lead to costs borne by all Americans.