Just Noise or Something More?

“It is not from the benevolence of the butcher, the brewer or the baker that we expect our dinner, but from their regard to their own interest.”
- Adam Smith

Much like the fireworks that many of you may have enjoyed as Americans celebrate the Independence Day holiday, investors have been bombarded with lots of noise and smoke as of late. Stocks have pulled back from the top of the range, and volatility has increased. Risks of a damaging trade war have risen. As of this writing, the $34 billion in tariffs that the United States is putting on Chinese goods is a literal drop in the bucket of a nearly $20 trillion economy, but it is the “second derivative” effects that we believe could be more serious. If the confidence of consumers or businesses is shaken, the potential for spending and capital investment to level off or decline grows, which could lead to a short-circuiting of the economic expansion and/or bull market.

Contentious trade negotiations have occurred in the past, but the fact that they’re being played out so publicly is a new phenomenon—resulting in rising trade-related market volatility. Although markets are clearly reacting to the day-to-day trade news, investors should refrain from trying to trade around the volatility.

As noted, trade isn’t the only cause for concern, as a rising dollar, slowing global economic growth and the possibility of a central bank mistake all appear to be impacting sentiment. We’ve seen stocks with greater international exposure—such as those in the technology and industrial sectors—get hit over the past couple of weeks as trade policy and a rising dollar—which makes U.S. goods more expensive to foreign buyers—have weighed on the sectors. 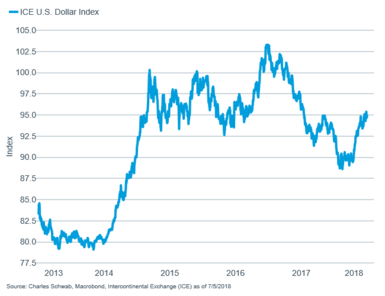 Hurting the performance of foreign-exposed areas Cutting through the noise

While concerns have risen, the bull market is likely intact. Corporate cash remains ample, with more being repatriated, as evidenced by the Bureau of Economic Analysis (BEA) report highlighting that $308 billion was repatriated in the first quarter; helping lead to a record $189.1 billion in stock buybacks. And there is still plenty more to bring back, with the tax reform making it more advantageous to do so. Additionally, while CNBC reported that two-thirds of corporate CFOs were concerned that the escalating trade disputes would negatively impact their businesses, business and consumer confidence remains healthy. 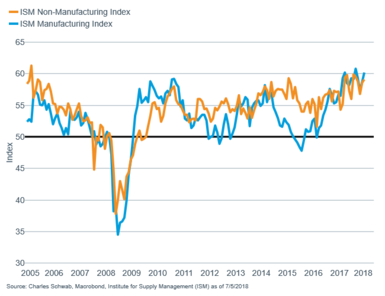 …and Consumer Confidence both remain elevated 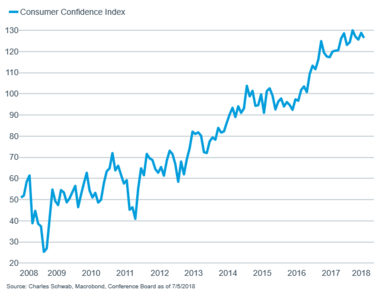 Second quarter earnings season commences next week, and with it comes a better look at both the health of the expansion and the potential damage from the trade skirmish. In particular, we’ll be watching for more cautious tones or any scaling back of capital spending plans. For now, the U.S. economy is in good shape to withstand some trade-related headwinds, but the second-order effects need to be monitored as well. There remains an ongoing tailwind from tax reform, especially for the consumer, while job growth remains strong. The latest jobs report from the Bureau of Labor Statistics (BLS) showed that 213,000 jobs were created and the unemployment rate ticked higher to a still low 4.0%, largely due to an increase of 602,000 workers in the past month to the labor force.

Also out with the labor report was the average hourly earnings number, which advanced a very modest 2.7%, continuing a trend of low wage pressures. While this will likely do little to dissuade the Federal Reserve from continuing its rate-hiking campaign, it won’t likely add to safety concerns for a group that has yet to express much concern over rising inflation—with multiple references by Federal Open Market Committee (FOMC) members about accepting of a little “heat” on the inflation front so as not to short-circuit the economic expansion. However, concerns are growing that the Federal Reserve could make a policy error and cause an inversion of the yield curve given the retreat since May in the 10-year Treasury yield. 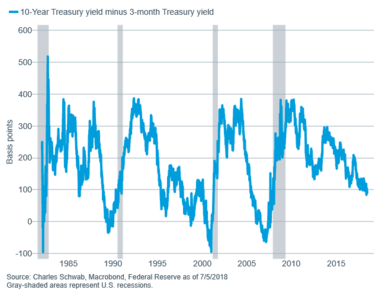 The yield curve has historically been a good indicator of a coming recession when it inverts—the shorter end moving above the longer end. For now we remain confident that the Fed has little desire to tempt fate and invert the curve purposely. But even absent an inversion in the curve, financial conditions are tightening and global liquidity is receding—both of which have implications for the economy and markets.

In mid-June, China released, through their National Bureau of Statistics, a series of disappointing economic data points for the month of May. We can see the impact of this data on the Citigroup Economic Surprise Index for China, which falls when data is worse than expected and rises when better than expected. The surprise index dropped to its lowest level since early 2016 when stocks in China had fallen sharply on fears of an economic slowdown, as you can see in the chart below. After posting a year-to-date gain of 8% through June 6 (building on the huge total return of 56% in 2017), the disappointing data led China’s stock market to turn negative for the year with a 3% loss as of July 4, measured by the MSCI China Index. By itself, this isn’t too alarming since a drop of 15% or more happens at least once almost every year in China’s volatile stock market. More importantly, it helped trigger a sharp drop in China’s currency, the yuan, from a two-year high, as you can see in the chart below (because it is quoted in yuan per dollar, a rising line indicates depreciation in China’s currency versus the dollar).

Why is the currency move so important? Because it has the potential to escalate trade tensions and pressure global stocks. If China allows its currency to continue to weaken versus the U.S. dollar it could be seen as seeking a trade advantage and pushing back against U.S. trade tariffs. Alternatively, if China intervenes to support its currency, it could also be seen as retaliation if it involves selling U.S. Treasuries.

China’s policymakers are unlikely to support much more of a sharp decline in the yuan for several reasons:

In fact, on July 3, after the swift decline in the Chinese yuan over the prior two weeks, China’s central bank seems to have had enough and issued comments suggesting the People’s Bank of China is now seeking stability in the currency (Wall Street Journal). The mere words halted the decline in the yuan at a level near where it was a year ago, easing worries over China’s use of its currency as a way to win a trade advantage that could fuel further tensions.

But what if something more than words are required to support the currency over the longer-term? If China were to conduct intervention, as they have in the past to support the yuan, they would buy yuan and sell dollars. One way they could do that is to sell some of the $1.2 trillion in U.S. Treasuries they hold (as shown in the chart below), which could also be seen as retaliation against U.S. tariffs on China’s goods and lead to further escalation of the trade skirmish between the U.S. and China.

China’s Treasury holdings have been relatively stable at about $1.2 trillion since 2010

Fortunately, the currency actions that could prompt further escalation may not be necessary since China's economy isn't collapsing and the data may begin to come in near expectations.

Nevertheless, moves in China’s currency will be closely watched given the potential for reversing the recent slight scaling back of trade threats against China by the U.S. in the past week or two, including:

Currency moves could be a trigger for escalating existing trade tensions which we believe currently remain limited in their earnings and economic impact. The process for resolution of trade issues could take time and create more market volatility in coming weeks, with the potential for both positive and negative consequences. Investors should avoid over-reacting to headlines and stay diversified, adhering to long-term asset allocations for now.

The noise surrounding the stock market is getting louder, resulting in more violent moves in equities. Much of the sound and fury is best ignored by long-term investors, but there are growing risks to the bull market in the form of rising trade disputes and the possibility of a central bank mistake. For now, we believe the secular bull market is intact, but are growing more concerned and urge investors to remain disciplined and diversified.

The Third Generation of Financial Planning

Finding Value in an Upside Down World

Be Selective for a Bumpier Ride

Still Looking for Alternatives? How about Real Assets?