As we reflect on a busy half-year, we thought we would offer responses to the questions we hear most frequently from partners and clients.

How far will the trade battles go?

We have already used several metaphors to describe the trade battle, from chess to the Great Wall. However, a new one might be useful to help us cope with the escalating trade tiff: The Kübler-Ross Five Stages of Grief.

Denial is behind us. Some commenters brushed off tariff threats as rhetoric, a negotiating tactic meant to force concessions. Once the Section 232 tariffs on steel and aluminum went into effect on June 1, we could no longer say the threats were merely hot air. Additional tariffs aimed at China went into force at the end of this week.

Anger is growing. Last month’s G7 meeting gave us the iconic picture of world leaders confronting President Trump, who sat with defiant body language. But tariffs are not just internationally unpopular: many U.S. companies are warning of higher prices and job losses.

Bargaining is afoot. Beyond continued negotiations among trade ministers, there has been a surge of tariff exception requests to the U.S. Department of Commerce from businesses that have been disadvantaged. Exemptions are meant for the import of goods not available domestically.

Acceptance is not yet at hand, especially since the stakes are continuously rising and there is no new equilibrium in sight.

Our base case remains that there will be no further implementation of significant tariffs beyond the remainder of the $50 billion action against China. The threatened tariffs on imported autos, and the $200 billion threat against China, could be damaging to U.S. consumers, who will be voting in November’s midterm elections. But as long as American leaders think they are gaining political capital by driving a hard bargain, they will not likely take a backward step.

Last December, the U.S. Congress rushed through sweeping tax reform legislation. We were not enthusiastic about the measure, as we detailed in our piece Checks and Balances. But the proof is in the performance. Has tax reform had the desired influence?

Some of the anticipated effects have certainly come to fruition. S&P 500 profits have increased by more than 20% over the past year, and a cumulative total of $670 billion in share repurchases have been announced by American corporations so far in 2018. That has added to the nation’s spending power: aggregate household wealth in the United States has exceeded $100 trillion for the first time. Combined with the exceptional performance of the American labor market, the demand side of the U.S. economy has rarely been in better condition.

The supply side presents a different story. Tax reform advocates hoped the reduction in corporate income tax rates and accelerated depreciation for capital expenditures would pave the way for productive investments that would increase capacity in the U.S. economy. On this front, early returns have been disappointing: as shown in the chart below,
growth in capital investment has actually stepped back a bit from its pace of late last year. 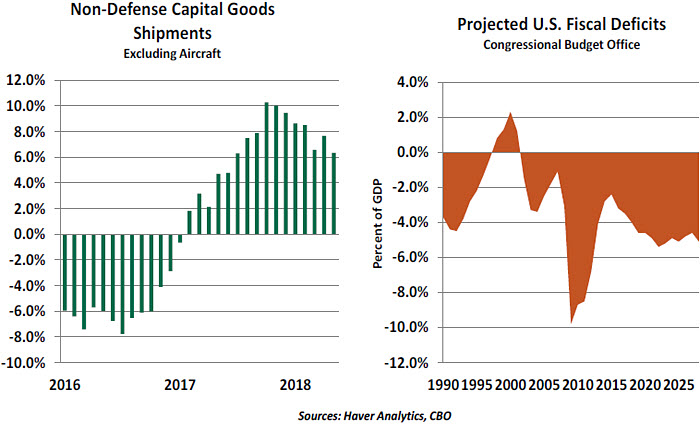 Spreading trade anxieties are almost certainly at play. Large companies are struggling to understand the international economic landscape, and aren’t sure where to invest (or whether to invest at all). The uncertainty is hostile to long-term capital formation, and the numbers reflect that.

Six months may seem like a long time, but the U.S. is still in the early stages of adjusting to its new tax regime. If supply-side reactions don’t improve, the calculations that justified tax reform will be not be realized. And that would raise questions over America’s fiscal future.

How will the yield curve affect the Fed?

An inverted yield curve is the condition in which yields on medium-term government notes are greater than yields on longer-term bonds. Historically, inversions often precede recessions; some therefore see the flattening yield curve as a signal of a pending downturn.

Spreads between Treasury yields at different maturities have been tight all year. Longer-term yields have remained low, while the Federal Reserve has twice raised the overnight rate. It should be noted that the Fed has some room to raise interest rates before inverting the yield curve. The two-year point, which is commonly used as a component of yield curve slope computations, certainly seems to reflect additional action from the Fed in the coming quarters.

The markets for short-term and long-term debt instruments are driven by different factors. This year, demand for long-term U.S. debt has been driven up by a flight to quality as uncertainty looms in Europe and emerging markets. This can be taken as a vote of confidence in the U.S. economy, at least relative to others.

Supply is also a factor. The U.S. government is running a debt-financed budget, and most debt issuance this year has been in shorter-term instruments. Yields have increased to keep investors buying auctioned bills. With relatively little increase to long-end issuance, the result has been a flattening of the curve.

Meanwhile, the Federal Open Market Committee (FOMC) is following its mandate. The current inflation and employment rates suggest short-term rates should rise. The group’s expectation of continued rate hikes has been consistently signaled all year. And eventually, we believe that will prompt long-term U.S. yields to increase. 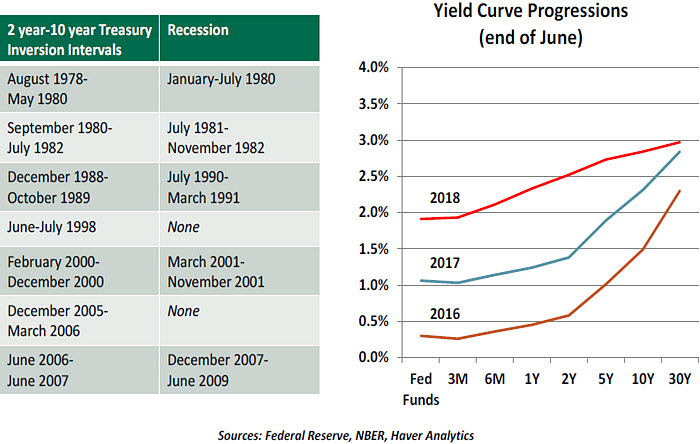 Policy makers ignore market signals at their peril. However, we do not expect the yield curve to be a limiting factor on Fed policy over the coming quarters.

Will stress in emerging markets spread?

Emerging markets (EMs) have been in constant focus over the course of last few months, but not for the right reasons. The stronger U.S. dollar and central bank retreat from easy money are presenting significant challenges to EMs, particularly those that have not kept their house in order—that is, they have failed to control their imbalances.

Two major fallouts for EMs will likely result from normalizing monetary policy in the U.S., the U.K., and the eurozone. First, foreign capital outflows should continue to intensify, making it harder for EMs to fund their current account deficits. Second, the currency devaluation that comes with capital outflows would make servicing of dollar denominated
debt more difficult. 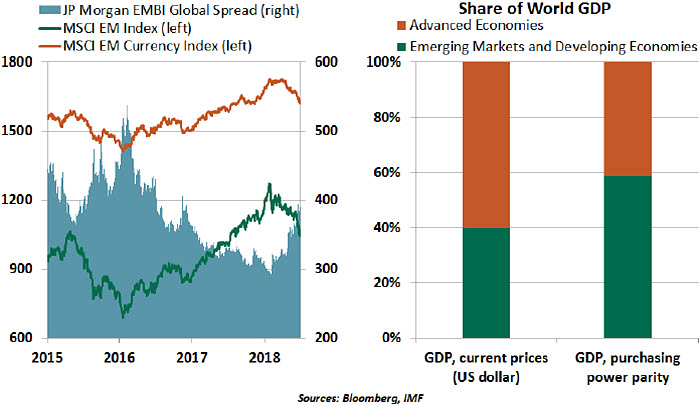 According to the Bank for International Settlements, the outstanding stock of U.S. dollar credit to non-bank EM borrowers has roughly doubled to $3.6 trillion since 2008. This debt pile up, coupled with a lack of sufficient foreign exchange reserves, has raised concerns over EM governments’ and companies’ ability to service their debts. In addition, escalating trade tensions are adding to the challenges faced by export-dependent EMs.

Overall, emerging markets have accounted for two-thirds of global growth since 2010 and now produce 60% of the world’s GDP. Further troubles in emerging markets will quickly become bad news for advanced economies.

How will Brexit turn out?

As we wrote in March, there is now one year until Brexit. Though the Brexit vote took place in mid-2016, little has been settled since then. The two sides have agreed on the length of a transition period, but details on the new relationship are few and far between. Political instability on each side of the negotiations has not helped.

In our baseline, we continue to expect a “softer” Brexit that preserves access to the common market. The cost of a “harder” departure, in our view, would be too much for the U.K. to bear. And it would create significant complications on both sides of the Irish border.

Without continued association with the European Union (EU), the U.K. will have the challenge of negotiating and signing trade deals with other nations during the transition. Given the rising global anxiety around international trade, negotiating trade-related treaties (around 295 of them will need to be addressed) will certainly be an arduous process.

The post-Brexit U.K. economy is likely to be hit by tighter financial conditions, weaker confidence and more restricted labor mobility. Jobs, particularly from the financial sector, are likely to move out of the U.K. Just this week, Jaguar Land Rover, the nation’s
biggest vehicle manufacturer, openly warned of rethinking its £80 billion investment plan
due to loss of access to the EU. 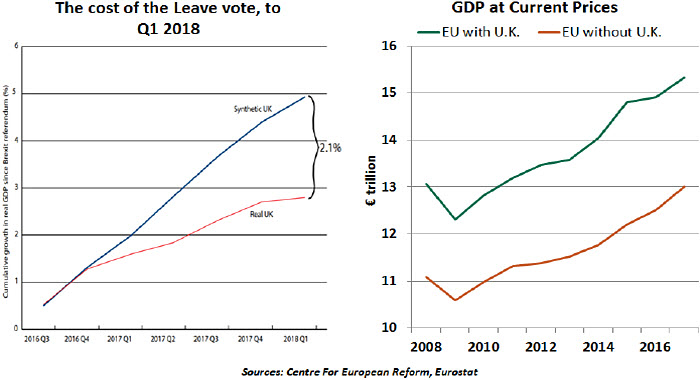 There is little doubt that a “hard” Brexit will be the most economically damaging outcome for the U.K. But even under the best circumstances, U.K. residents and their trading partners should expect tumultuous years ahead.

“Hard” or “soft,” the EU wouldn’t be gaining much from Brexit, either, after losing the second largest economy of the bloc. Without the U.K., the size of EU’s economy will become smaller than that of the U.S. in purchasing power parity terms.

Is the Phillips Curve permanently broken?

At one point, the relationship between unemployment and inflation formed a tidy downward-sloping curve. The frontier served as a tool for policy makers who sought to balance the two. But this gauge has diverged from historical precedent.

Unemployment rates have hit new lows in a number of countries. Age-adjusted labor force participation is rising. The number of job openings in the United States exceeds the number of jobless persons for the first time. Anecdotes of labor shortages are legion. And yet wage gains remain well below the levels seen in past cycles. 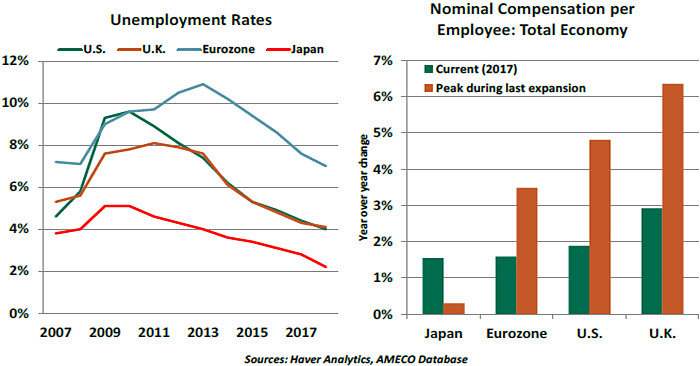 There are a range of potential explanations for this apparent disconnect. Automation (present and future) and global sourcing are primary means used by firms to limit compensation costs. Worker productivity in many markets has been growing slowly; real wages are closely linked to productivity gains. And workers seem to have far less leverage than they used to, as union membership declines and structural labor force reform advances.

The second part of the Phillips Curve process, the translation of wage gains to overall price level, is also not operating as one might expect. Even if firms see their costs rise, the ability to pass them along is more limited than ever. E-commerce has made consumers more intelligent, providing them heightened means to research products and compare offers.

Late in business cycles, governors on wages and prices become difficult to sustain in the face of strong demand. We think we are getting close to this phase. It could be that the Phillips Curve isn’t dead; it was just resting.