Viewing Trade Barriers From Both Sides

Mutianyu (慕田峪) is a particularly well-preserved section of the Great Wall of China, about 40 miles from the nation’s capital. During a rare free afternoon in Beijing earlier this month, I decided to ditch my e-mail mountain to visit one of the “New Seven Wonders of the World.” It was a wise decision. The day was clear, the crowds were light and the views were spectacular.

Construction on the Great Wall began more than 2,000 years ago, to protect China from outsiders. Standing atop the structure, I certainly didn’t see Mongolian hordes threatening invasion. But the Wall can be viewed a symbol of China’s longstanding aversion to foreign influences. A modern version of the Wall is used by Chinese authorities to control trade; at the moment, that barrier is under renewed siege.

The visit to Asia offered me the chance to get an Eastern perspective on the recent escalation of global trade frictions. As you might imagine, there is a significant difference of views with the West, which must be reconciled to avoid an all-out trade war.

Like other countries in Asia, China has used exports as an avenue to economic development. Taking advantage of low labor costs, Chinese factories gained market share steadily from 1970 to 2000, and then went into overdrive after China was admitted to the World Trade Organization (WTO) in 2002. This mercantilist orientation generated substantial trade surpluses, both overall and with the United States. 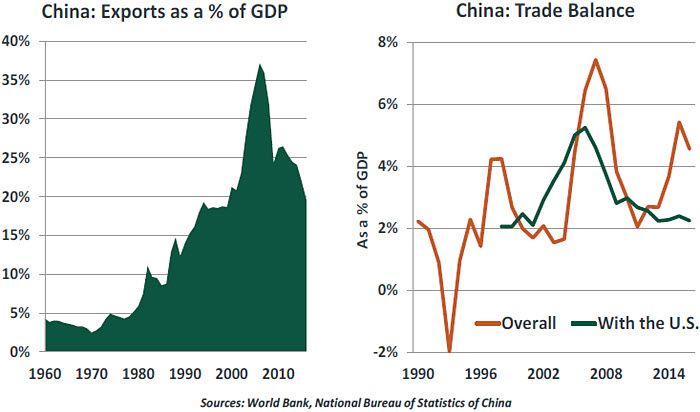 Cries of foul escalated with China’s share of industrial markets. Over the years, detractors have claimed that China’s environmental laws are too lax, its support of local companies is too generous and its currency is too cheap. China’s appropriation of intellectual property and its selective use of regulation to hinder foreign companies has also been a source of concern. What Beijing has called “capitalism with Chinese characteristics” is seen by many in the West as simple central planning and protectionism.

To keep markets truly open, WTO members are expected to limit government restrictions on commerce and capital. China’s practices have been persistently viewed in the West as too restrictive. While the United States has been the tip of the spear, many countries feel strongly that China has not fulfilled its commitments to become more open.

The view from the Far East is that trade restrictions are not the main cause of global imbalances. When countries that save a lot trade with countries that save very little, the first will inevitably develop a trade surplus. The American saving rate is roughly ten times smaller than China’s; hence the asymmetry in trade flows. As China has become wealthier, its collective consumption has grown. But consumption still represents a much smaller share of China’s gross domestic product (GDP) than it does in the United States.

The Chinese further contend that the United States is a far bigger transgressor in the trade arena. In fact, the number of WTO cases naming the U.S. as respondent is more than three times higher than the figure for China. (And this reading pre-dates the grievances that will almost certainly be filed by Canada, the European Union and others
in response to recent trade actions taken in Washington.) The administration has justified
many of its actions on national security grounds, which Asian audiences see as a stretch. 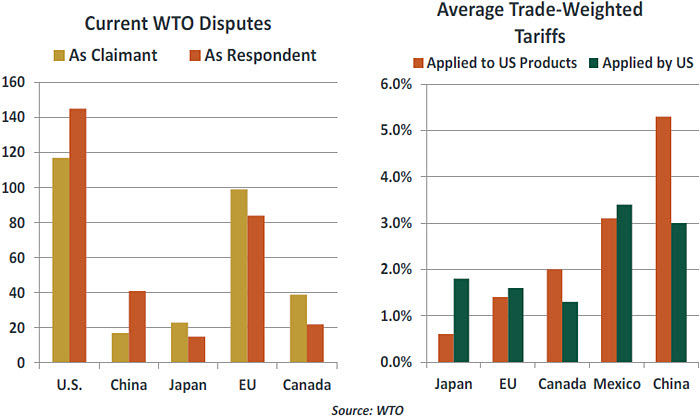 For the last two years, China has been claiming the mantle as the world’s leading proponent of free trade. But that claim must be viewed cautiously. While tariffs around most of the world have collapsed over the past 30 years, the Chinese have sustained tariffs at relatively high levels. And while most nations have divested government ownership of leading companies, the Chinese continue to own and influence their national champions to a substantial degree.

A prominent manifestation of China’s industrial policy is “Made in China 2025,” which seeks to make the country the world’s premier developer of robotics, artificial intelligence, e-commerce and the platforms required to operate them. These industries are poised to drive growth in the coming decades. To advance its aspirations, the Chinese government has taken stakes in leading companies and made it difficult for foreign technology firms to gain a foothold.

Made in China 2025 also takes direct aim at a space currently dominated by the United States, and which has strategic implications. So it is not surprising that the technology sector has been the target of initial rounds of U.S. tariffs. Westerners also note this as a prime example of China’s anticompetitive practices, which they contend will only be corrected through aggressive action.

Developing countries in Asia endured a painful crisis in the late 1990s. They had been encouraged by international authorities to open their markets to greater flows of goods and capital, but had not taken steps to manage those flows during difficult periods. The Chinese use that episode to justify their continued control of trade, capital flows and their currency, even though China now ranks as the world’s second-largest economy. This is a frustration to Western firms, especially financial companies that had anticipated opportunities in the arenas of credit, trading and investing.

Most Chinese are prohibited from investing outside of the country. This has led to a series of financial excesses, with real estate a leading example. Last fall, China’s leaders pledged to reform the financial sector and clamp down on credit. They have been making progress, but there is much work to do. It will take a lot of time, political capital and money.

As they walk this delicate path, the last thing China wants is a trade war. It would be a major distraction, and would threaten the steady economic growth that provides time to implement policy changes. With the pain of tariffs beginning to reach Chinese companies, the government has directed an easing of credit, an action that runs counter to the reform agenda. While President Xi is politically secure, it is not clear that China can wait out the Americans. China’s exports to the U.S. are an important share of GDP, while U.S. exports to China barely register.

It would be an understatement to say that those I met with in Asia were confounded by the negotiating posture of the United States. They complained about the unpredictability of American action and wondered when provocation would give way to negotiation. I mentioned that the tactic of gaining a competitive advantage by annoying one’s opponent is described in Chinese philosopher Sun Tzu’s The Art of War, but this was
of little comfort. 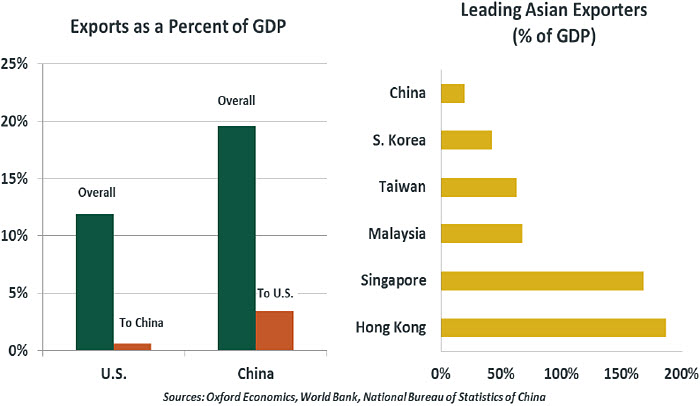 Those with whom I met during the trip were alarmed at the U.S. perspective that a trade war would be winnable. If things go to extremes, no one will be better off. American businesses will pay in their margins, and consumers will pay more for almost everything. Employment in the battling nations is likely to decline. But the White House seems intent on pressing its points to the maximum, even in the face of corporate discontent and potential market disruption.

Among the biggest losers in a trade war would be emerging Asian economies, who supply both China and the West with raw materials and finished goods. As seen from the air during my trip, the number of ships surrounding the major ports in Hong Kong, Singapore and Seoul is astounding. Should that traffic begin to ebb, the region would be in for some difficult times.

The economic barriers separating America and China are rising rapidly. But I hold out hope that reasoned heads will eventually halt construction before another Great Wall is erected.

Less than a month ago, we discussed a series of steps taken by Chinese policymakers towards financial liberalization and how these measures had boosted foreign inflows in the domestic bond market. Though foreign investors are warming up to Chinese bonds, the domestic bond market is currently facing the dual headwinds of rising global interest rates and country’s own campaign of financial reform.

Interest rates are rising due to evolving global conditions, and there is little that Chinese policymakers can do about it. However, their own efforts to reduce risk in their financial system are contributing to rising domestic bond defaults. The bulk of these defaults have been in the corporate sector, not in the state-owned enterprises that have a stronger backing from Beijing.

According to data cited by the Wall Street Journal and compiled by Wind Info, a total of 13 issuers have defaulted on a combined 20.2 billion renminbi (RMB), or $3.1 billion, worth of corporate bonds in the domestic market so far this year. This compares to 11 defaults worth around RMB 14 billion ($2.2 billion) over the same period last year.

The costs of the defaults are substantial. Recent examples include CEFC Shanghai International Group Ltd, a subsidiary of China’s CEFC Energy Group, defaulting on $327 million in interest and principal payments. On May 7, Kaidi Ecological and Environmental Technology, a biomass power generation company, defaulted on RMB 698 million ($108 million).

Rising defaults have led to ratings downgrades by analysts. According to Caixin, China’s corporate bond market has seen over 40 credit rating downgrades for issuers and 80 downgrades for specific bonds thus far in 2018, compared with a total 95 of bond downgrades in all of 2017. With around RMB 8.2 trillion ($1.3 trillion) worth of domestic
corporate and local-government securities due to mature over the next year, we are likely
to see more defaults in the near future.

Rising corporate bond defaults, when set against the backdrop of China’s crackdown on shadow lending, have started weighing on investor sentiment. In May, credit spreads had climbed to near two-year highs amid rising default concerns. To add to the anxiety, indebted corporates are now struggling to raise new funds. Net issuance of corporate bond financing dropped sharply in the month of May, the first decline since June 2017.

The shift in composition of lending from off-balance sheet to on-balance sheet was further evident in the broad decline in shadow bank lending. Entrusted loans, trust loans and banker’s acceptances together recorded a decrease of RMB 421.5 billion in May.

Chinese policymakers’ willingness to let some companies default is a signal of transition to a more market-based system. However, when it comes to large defaults, the government will continue to intervene, as seen recently, to avoid risking financial stability. DunAn, a group with RMB 45 billion ($7 billion) in debt, was considered a high-quality asset until last year. It recently averted a bond default, thanks to the intervention of the Zhejiang provincial government.

Despite rising defaults, the systemic risks in China remain low given the small magnitude of defaults relative to the volume of outstanding corporate bonds (0.08% of the total outstanding value $4 trillion). This is a modest amount by Western standards, but represents a break from the practice of quiet resolution to deal with debt problems.

Authorities are changing certain requirements to reduce the risk of future defaults. Some recent regulations include prohibiting financial institutions from lending to infrastructure projects deemed to be economically impractical or that carry illegal government guarantees.

Defaults are a sign of a well-functioning lending market. To not see at least a handful of defaults after the immense increase in leverage over recent years would have indicated market manipulation. In the long term, a systematic transition led by new regulatory structures will help China rein in its financial risks. Policymakers will view defaults as a short-term cost in order to achieve longer-term gains.