“Life is like riding a bicycle. To keep your balance, you must keep moving.”

U.S. stock market indexes have been able to take the above advice and keep moving, remaining near the top of the recent range despite rising trade concerns. There appears to be at least a temporary balance between positive developments and the proverbial “wall of worry.” A more hawkish stance by major global central banks and escalating trade disputes have been offset by still-high business and consumer confidence and accelerating economic growth. Investor sentiment, according to the Ned Davis Research Crowd Sentiment Poll, has been relatively neutral, edging higher but not in excessive optimism territory (remember, sentiment is a contrarian indicator at extremes). U.S. Treasury yields have rebounded from the Italian political crisis-related drop, but haven’t been able to again breech the 3% level; oil has pulled back slightly; and geopolitical concerns have come off the boil. We don’t believe this “balance” will last forever, of course, but the bicycle could keep moving along in the near-term.

Commentators and pundits have been talking about “peaks” quite often—peak earnings growth, peak economic growth, peak fiscal stimulus, peak monetary stimulus, etc. It may be that this slower-than-average recovery/expansion allows those peaks to be put off further than expected, allowing the bull market to persist. If there is an advantage to this having been the weakest expansion in U.S. history it’s that even with it being the second-longest in history, its weakness means many of the excesses that tend to build and cause recessions aren’t yet present.

We won’t mention the young lady by name, but the girl who broke into a house and ate the food and slept in the bed may be back again—helping to support the ongoing bull market. As the first half of the year draws to a close, the Atlanta Fed GDPNow forecast for second quarter growth—which traditionally trends lower throughout the quarter as new data comes in—has been trending higher and now stands at a robust 4.7%—still likely a bit higher than what we’ll actually see, but encouraging nonetheless. The recent retail sales report released by the Census Bureau supports that better growth, as overall retail sales rose 0.8% month-over-month (m/m), while ex-autos and gas, sales were also up 0.8%--much better than expected.

We appear to finally be seeing the strong consumer confidence filter through to actions. Business confidence remains high and should continue to translate into stronger capital spending; however, trade concerns are having an impact on some measures of confidence. The most recent National Federation of Independent Business (NFIB) reading showed confidence at its second-highest level ever, while various other surveys show capital spending plans are rising. On the other hand, the recent CNBC Global CFO Council survey showed that two-thirds of U.S. companies say the Trump Administration’s tariffs will have a negative impact on their companies; with even more saying the trade “war” will have a negative impact on both the U.S. and Chinese economies. In fact, more than 27% of council members say U.S. trade policy is now the biggest risk their company faces (up from 11.6% in the prior quarterly survey). 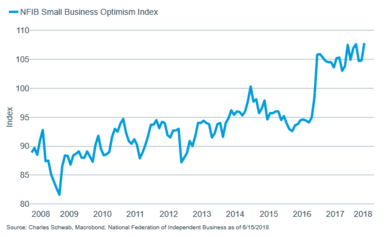 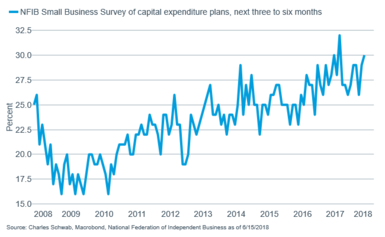 Tariffs and ongoing trade disputes are likely to add to near-term volatility but we also believe that there is an asymmetric risk assessment in this situation. The consensus is that trade wars are bad, and we don’t disagree. But we are not yet fully down that slippery slope and there remains the possibility of a constructive ultimate outcome benefitting both the United States and its trading partners. President Trump noted that he suggested to his fellow G-7 members that they should get rid of all tariffs and trade impediments. That’s not going to happen, but a best-case scenario is that we end up with freer trade than when we started. A worst-case scenario is that the rhetoric and tariffs proposals continue to ramp, we head into a true trade war, and that it results in deteriorating confidence, weaker economic growth and higher inflation. That would result in the “trade wars are bad” mantra becoming a self-fulfilling prophecy.

Trade conflict and the global markets

Digging deeper into the most recent escalation, President Trump has asked his administration to identify another $200 billion in goods to be subject to 10% tariffs if China retaliates to earlier rounds of U.S. tariffs. If ultimately implemented, this would be a big step toward a broader trade war that may become harder to reverse and could weigh on the global economy and stock markets. How big of a step? We can put the U.S. trade announcements in historical perspective using the chart below. 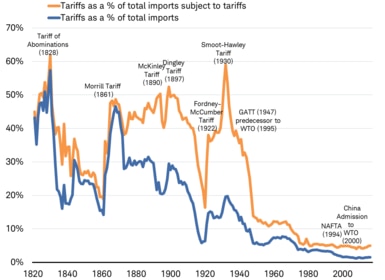 If the announced tariffs are implemented (those already implemented plus those targeting imports from China that total $350 billion listed in the table below), the amount of tariffs as a percentage of total imports could rise to 4.3% (without offsetting the tariffs that most of these products are already subject to) from 1.4% in 2016, as shown in the chart above. While this is well below the 20% of imports during the Smoot-Hawley era trade war, which deepened and lengthened the Great Depression, it still would mark a big departure from the trend of recent decades toward freer global trade.

While the announced tariffs may be lower than in the past, corporate sales may be at greater risk from tariffs than decades ago. Past episodes of rising trade barriers were offset by foreign sources making up a much smaller share of sales for companies around the world. If the coming weeks mark the start of a broader trade war led by the United States, the impact on corporate profits for companies around the globe could be felt quickly.

U.S. companies source 38% of their revenue from international trade, which could be subject to retaliatory tariffs. Non-U.S. companies in the MSCI AC World Index have an average of 16% of revenue coming from trade with the United States that could be subject to higher U.S. tariffs, according to data from Factset. But, that exposure is not evenly distributed across the globe, with companies in some countries and regions having more exposure than others. One way to look at what areas may be most impacted by a U.S.-led trade war is through trade exposure of companies that make up the stock markets of different countries, which you can see in the chart below.

Company exposure to the U.S. and overall varies by home country While some European countries make the list with relatively high exposure to the United States, such as Switzerland and Germany, targeted trade measures implemented against China and NAFTA members Canada and Mexico may be more impactful despite their lower exposure to U.S. sales.

While rhetoric has become heated and risks have risen, there is still time for a major trade conflict with the U.S. to be averted. Two weeks remain before July 6th, when the first round of China tariffs is currently scheduled to be implemented. Any breakthrough, or even a delay, could signal that negotiations are progressing and prompt a snapback after the global market declines of the past week.

The trade worries apparently didn’t extend to the Federal Reserve, as they again raised rates and expressed few concerns that the disputes would impact U.S. growth in a meaningful way. In his initial press conference—which he must have loved, as he signed up to do one after every meeting beginning next year—he painted a downright rosy picture. The Federal Open Market Committee (FOMC) upped its forecast for rate hikes in 2018 to a total of four from three. Chairman Powell, the first non-economist to head the Fed, used a more plain speaking approach and waxed optimistic, calling economic growth “solid.” He indicated that gradual normalization will continue, but at this point the Fed sees no reason to move into restrictive territory. Indeed, inflation has ticked higher, but still remains at relatively modest levels, while despite the historically low unemployment rate, wage increases remain modest.

Inflation rising but not too high…yet 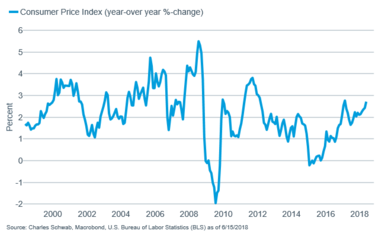 The risk of the Fed having to tighten more quickly remains, but, for now, the FOMC appears relatively sanguine about the “balance” they’re seeing in the economy.

Despite a recent modest pullback in U.S. stocks, and a sharper one in international markets—reflecting both trade worries and the recent strength in the U.S. dollar—we don’t believe it marks the beginning of a more severe correction. Risks of a prolonged trade dispute have risen but it’s too soon to declare war; while the possibility of a positive resolution that would likely be a tailwind for equities. For now, a healthy U.S. economy is an offset to those growing worries. Threats to the current bull market have risen, and they include this being a midterm election year—which have historically been accompanied by larger-than-average maximum drawdowns. We continue to espouse discipline and diversification; but for now it’s in the context of an ongoing bull market.

The Long Game: A Case for Investing in Emerging Markets Through Periods of Volatility

Accessing the Nasdaq 100 with Built-In Buffers

New Estimates of the Need for Long-Term Care

Investors Pile Into Stocks That Win in a Full Economic Recovery

Is it Time to Cut Back on Our Office Space?

Is The Fed Walking Into A Trap?

What’s Wrong With the Rebound?

Are Negative Interest Rates Coming To The US?

Niall Ferguson – We Need to Live with COVID-19

Medicare Will Cost Me HOW Much?

Robert Shiller: “Not Much of a Sell Signal” for U.S. Stocks

Jim Bianco – A 90% Recovery Will Be a Disaster

High Speed: Bear and Bull Both Running at Full Speed

by John Mauldin of Mauldin Economics, 5/8/20

Every Picture Tells a Story: “Chartbook” Look at Economy/Market

Gundlach: Biden Will Not Win the Democratic Nomination

by John Mauldin of Mauldin Economics, 6/7/19