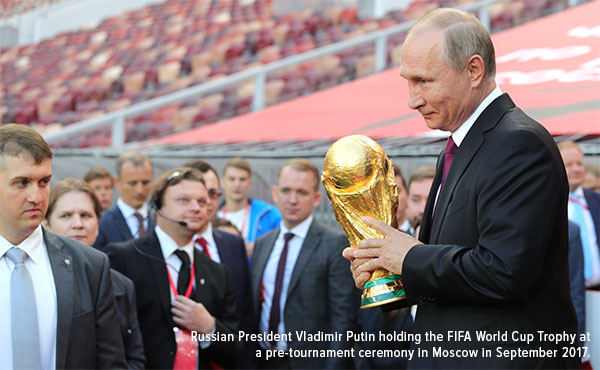 We’re a little more than a week into the 2018 FIFA World Cup, and so far Russia has surprised experts and fans alike. Expectations were low at best. Because of recent setbacks, including a disastrous performance at the 2016 UEFA European Championship and injuries sustained by key players, the federation ranked a dismal 66th place among Fédération Internationale de Football Association teams—its lowest position ever. The only reason it didn’t have to qualify to compete was because Russia is the host nation. (This is the first time in its 88-year history, by the way, that the World Cup has been held in Eastern Europe.)

And yet Russia currently ranks first in its group after defeating Saudi Arabia (5-0) and Egypt (3-1), defying predictions that the federation would be eliminated right out of the gate. Left winger Denis Cheryshev has so far scored three goals, more than any other player in the 32-team tournament except Portugal’s Cristiano Ronaldo.

It’s still early, and the team has an uphill battle ahead of it. We’ll see how Russia fares when it goes up against group favorite Uruguay on Monday. As for which team might win the Cup, sophisticated predictive models using portfolio theory and the historical performance of players are pointing to France beating Spain in the final.

Russian Airports Could Be Biggest Beneficiaries of Hosting World Cup

This is the second time in the past five years that Russia has hosted a major international sports tournament, and questions have surfaced about what economic benefits, if any, doing so affords.

As I shared with you back in February, the Eastern European country spent as much as $50 billion, a record-breaking sum, to host the 2014 Winter Olympics in Sochi. It seems insurmountable, but Fitch Ratings concluded that the debt was “manageable,” citing the reduction of interest rates to 0.5 percent and noting that the cost is less than 2.5 percent of Russia’s gross domestic product (GDP).

Hosting the World Cup has set Russia back an estimated $14 billion—again, a record amount for the competition. But unlike the Olympics, the Cup could produce some modest net economic benefits—in the short-term, at least—according to experts.

Back in April, tournament organizers predicted that, as a result of increased tourism and large-scale spending on infrastructure, the competition would add nearly $31 billion to Russia’s economy in the 10 years between 2013 and 2023. (FIFA selected Russia as the host nation in 2010.) Analysts with Moody’s Investors Service were slightly less upbeat, writing that they see “very limited economic impact at the national level.” Among the beneficiaries are food retailers, hotels, telecommunications firms and transportation, as “better public infrastructure will likely generate additional tax revenue and reduce capital spending needs for the hosting regions in the coming years.” But the greatest long-term beneficiary, Moody’s says, are Moscow-based international airports, since “upgraded facilities will support higher passenger flow, even after the event.”

Watch this brief video on opportunities in the global airline and airport industries by clicking here!

Besides its soccer prowess, Russia is defying expectations in other ways—and equity investors should be taking notice.

Having emerged last year from a two-year recession that was triggered by the collapse in oil prices and imposition of sanctions following its annexation of Crimea, the country is now in full-on recovery mode. In a note to investors this week, Capital Economics senior emerging markets economist William Jackson says that GDP growth in May picked up to more than 2 percent year-over-year, up from 1.3 percent in the first quarter. Most of the changes, according to Jackson, came in manufacturing, which he estimates to be growing by more than 5 percent year-over-year, compared with only 1 percent previously.

“This all supports the point we’ve been making for some time,” he writes, “that Russia’s recovery was likely to resume and gather pace this year.”

Once almost entirely reliant on oil exports, the government of the world’s leading oil producer has lowered the structure of exports from 70 percent energy in 2013 to 59 percent last year, according to the World Bank. Today, the budget is back in surplus, and government debt stands at a remarkable 33 percent of GDP, the lowest among G20 nations.

Key inflation is currently running at a record low of 2.4 percent year-over-year, well below the Central Bank of Russia’s (CBR) target of 4 percent. Food inflation, in particular, is near zero percent.

Unemployment continues to decline. In May it fell to 4.7 percent, a record low since the collapse of the Soviet Union in 1991.

Because of low inflation and a near-full employment jobs market, real wages are expanding healthily across all sectors. This is helping to drive stronger private consumption and investment. In May, retail sales grew 2.4 percent compared to the same month last year.

The Russian government is currently enacting or considering policy that should help sustain the economy’s recovery. For one, it recently moved to raise the retirement age to reduce the cost to the state budget on an aging population, the Financial Times reports. (The median age in Russia is nearly 40, compared to around 30 for the entire world.) The pension age for men will increase from 60 years to 65 years in 2028, while for women it will increase from 55 years to 63 years in 2034.

The reform could help the government save an estimated $27.3 billion a year, according to a Russian think tank.

The government is also reportedly working on a plan to invest more in infrastructure and reduce “unnecessary regulation that is holding back private investment.” That’s according to Morgan Stanley’s Clemens Grafe, who adds that plans for “national projects” will be drawn up by October “that should help Russia to become one of the five largest economies in the world.”

Time to Consider Investing in Moscow?

Some might consider that fanciful thinking, but it doesn’t take away from the fact that Russia is an attractive place to invest right now, especially compared to the U.S. market.

Besides an economy in recovery, consider the following: Whereas the S&P 500 Index is up a little more than 13 percent for the 12-month period, the MOEX Russia Index has seen gains closer to 22 percent. That comes with an appealing 6.46 percent dividend yield, compared to 1.94 percent for U.S. stocks. This week spot gold closed at $1,269.42 down $10.13 per ounce, or 0.79 percent. Gold stocks, as measured by the NYSE Arca Gold Miners Index, ended the week lower by 0.27 percent. Junior-tiered stocks outperformed seniors for the week, as the S&P/TSX Venture Index gained 0.24 percent. The U.S. Trade-Weighted Dollar reversed course this week and slipped back 0.28 percent.