After completing her first year at college, my daughter moved back home for the summer about a month ago. Her final exams concluded only a short time before the required departure from the dorm, so her packing was a little harried. She arrived with all manner of suitcases, boxes, and trash bags, all filled with a mix of clean and dirty clothing.

Weary from studying, she spent the first week at home rising at noon and returning to bed for a nap a few hours later. The piles of debris (littered across several bedrooms, bathrooms, and the hallway) seemed to grow, rather than dissipate. After being patient for a considerable interval, my wife and I concluded that we had offered too much accommodation.

The Federal Reserve further reduced its level of accommodation by increasing interest rates once again this week. This was the seventh step in a string that began in December 2015. The move was widely expected, so attention was primarily focused on where the Fed might go from here.

Fed leader Jerome Powell began his second news conference by noting that “The economy is doing very well.” And so it is. Growth is strong, unemployment is at a 17-year low, corporate profits are exceptional and asset markets have produced strong returns. Powell sounded optimistic about the influence of tax reductions on demand, and hopeful about their prospective impact on the economy’s supply-side.

Keeping a balance between these two will be critical to keeping the price level in check. After running below the Fed’s target for a very long time, inflation measures are coalescing around 2%. At its May gathering, the Federal Open Market Committee clarified that its target was “symmetric,” meaning that readings slightly under or slightly over the desired level would not necessarily prompt corrective action. 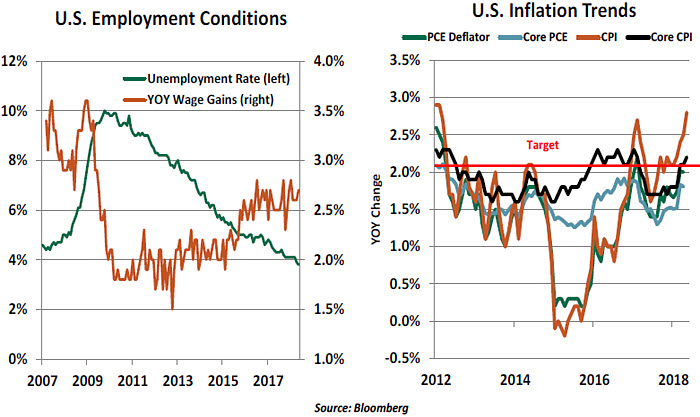 The Fed’s inflation projections remain benign. The consensus calls for annual increases in the price level that peak at a 2.1% annual rate; the upper end of the range of forecasts is just 2.3%. This is partly a reflection of the secular governors on inflation, which include corporate resourcefulness in containing costs and the power e-commerce has given consumers to shop efficiently.

This seemingly ideal combination—strong growth with low inflation—begs the question of why the FOMC is raising interest rates. The answer is twofold.

Firstly, if growth continues along its recent trajectory, inflation may become more of a risk. If demand grows more rapidly than capacity, idle resources will be called into production until they are fully utilized. Once that point is reached, the costs of those resources may be subject to upward pressure. Wages have not risen rapidly, even with unemployment at very low levels; but reports of labor shortages are multiplying. The Phillips Curve may be weakened, but it is not deceased.

Secondly, there is a risk in leaving policy too easy for too long. The FOMC’s median estimate of the long-term Federal funds rate is 2.9%, a full percentage point above where rates are now. And the Fed’s balance sheet remains well above the level most economists think is needed to conduct open market operations. Financial conditions are very easy, and this might facilitate market excesses that could destabilize the system.

To be sure, there are uncertainties about where the red lines are. We struggle with what Chairman Powell called “unobservable quantities,” such as the natural rate of unemployment and the “neutral” interest rate (which is neither restrictive nor stimulative). Nonetheless, it is fair to say that the current level of interest rates is quite low, given the strength and duration of the expansion. 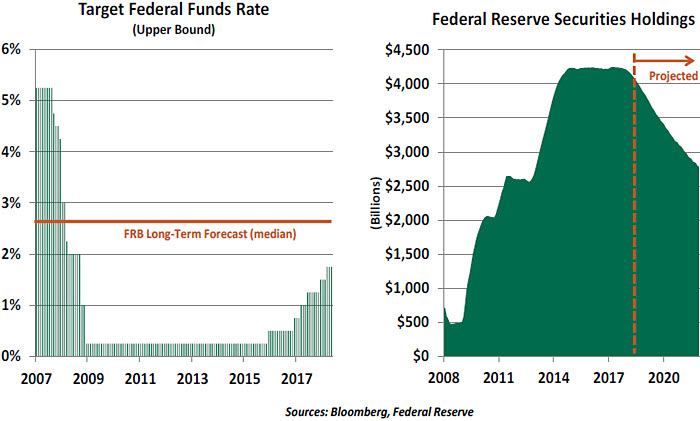 Simply stated, the U.S. no longer needs monetary policy that is so easy. The Fed’s benign inflation outlook might be due, in part, to the expectation for further increases in interest rates; if those increases are not realized, future inflation might certainly be higher.

Two questions about the Fed were asked frequently during my recent travels. The first centered on the impact of U.S. monetary policy on emerging markets. Rising rates (and any related strength of the dollar) can be hard on countries with high debt levels (as we discussed here). But many of the emerging markets that have been struggling of late have problems of their own making. And their difficulties are, at least for now, unlikely to create problems for the global economy. The Fed will certainly watch these situations, but will not be deterred by them.

The second concerned the constraint of the yield curve. Spreads between short-term and long-term rates have narrowed, and historically, inversions have been correlated with recessions. The thinking among some, therefore, is that the Fed will hesitate to push short-term rates above long-term rates.

FOMC minutes suggest that the group has a range of views on this issue. As Chairman Powell observed, several things other than monetary policy drive long-term U.S. interest rates. Flights to quality occur from time to time, and the term premium (the reward investors require for locking in their money for long periods of time) has been falling steadily for ten years. These developments make it hard to infer the bond market’s forecast of economic developments and diminish the yield curve’s value as a leading indicator.

Inversion is still some distance away, so the FOMC will not have to reconcile its differences of opinion on the yield curve. Our view is that this is a minor consideration: inflation and financial conditions are much more important. On that basis, we continue to expect the Fed to remove accommodation until they reach a new normal. That likely means hikes at the end of each of the next four quarters.

The European Central Bank (ECB) announced this week that growth in its balance sheet is near an end. While this action was well-previewed, it is not clear that it is the right one.

The ECB statement called for asset purchases to taper from the current level of €30bn per month to €15bn starting in October. If all goes well, the bond buying will cease at the end of the year. Thereafter, acquisitions will be undertaken only to replace maturing securities. The statement further indicated that the ECB’s interest rates would remain at present levels at least through the summer of 2019.

Recent comments from numerous ECB representatives had set the tone for this step, and references to downside risks in the ECB’s official statements had been softened. But recent deterioration in eurozone economic data and increased geo-political uncertainty had led to speculation that tapering would be delayed. Despite these uncertainties, the ECB still expressed confidence about the underlying strength in the economy and characterized risks to the outlook as “balanced.”

The eurozone economy had a disappointing first quarter. Some of this was due to temporary factors (like weather). But incoming data has set a softer tone for the second quarter, dampening hopes of a bounce back in activity. Eurozone industrial production weakened further in April, and the renewed drop in the German ZEW economic sentiment index suggests clouds are gathering over the region’s economic outlook. The eurozone purchasing manager’s index (PMI), which is a leading indicator of economic activity, has lagged progress in other regions.

The increasing threat of a global trade war is undoubtedly weighing on expectations. Such a scenario would be damaging for eurozone growth prospects, particularly for its engine – Germany. Germany’s exports account for around 47% of its gross domestic product (GDP), making it vulnerable to volleys of tariffs. Fears of rising protectionist sentiment, and the uncertainty it creates, may be around for a while.

Eurozone exports, which were a key drag on the economy in the first quarter, are therefore unlikely to rebound in the near term. And if tone taken at the recent G-7 meeting carries over into tangible trade restrictions, further declines cannot be ruled out. 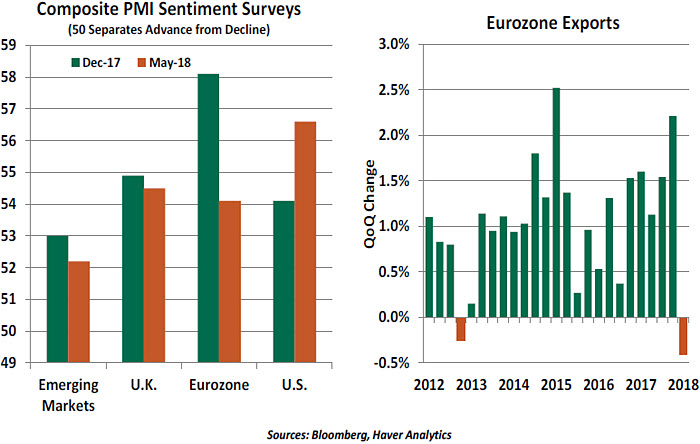 The ECB operates with an inflation target of 2%. “Headline” inflation is close to that level, but this was largely an energy story and not a notable pick up in underlying price pressures. Core inflation (which excludes food and energy prices) over the past twelve months is a little over 1%. Yet the ECB statement suggested the Governing Council concluded that “progress towards a sustained adjustment in inflation has been substantial.”

Political uncertainty in Europe has become an issue once again. As we discussed here, the new Italian government may pursue policies that are not in the best interest of the eurozone. The rhetoric and the Italian markets have calmed over the past few weeks, but the threat remains. The ECB seems to be of the view that the turbulence will have very little, if any, contagion in the wider eurozone markets.

Additionally, Greece is not out of the woods yet. Though the country is fast-tracking debate on its reform package to unlock final bailout funds, eurozone officials are still engaged in difficult talks with the International Monetary Fund (IMF) over the terms of relief. The IMF wants Greek debt to be reduced to sustainable levels, but any further forgiveness or restructuring may not be palatable to Germany (or others).

To be fair, the ECB’s balance sheet has grown to nearly 40% of eurozone gross domestic product (GDP). This is almost twice as large as the efforts initiated by the Fed and the Bank of England. Even without additional purchases, such a large balance sheet should provide plenty of monetary support to the eurozone economy.

Furthermore, it was becoming increasingly difficult for the ECB to continue the present pace of asset purchases. The program is generally required to buy securities issued by each member nation in proportion to the capital each holds in the ECB (which is based on the size of each economy). Germany, which needs stimulus least, is nonetheless the biggest benefactor of the ECB’s efforts. It has become harder for the ECB to find securities to purchase that conform to its investment guidelines. 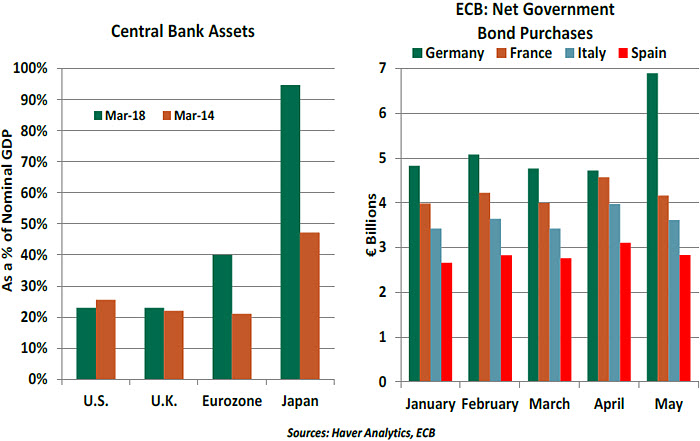 One of the ways that quantitative easing (QE) programs work is through steering investor psychology. A persistent and substantial QE effort reduces long-term rates, and leads to expectations that they will stay low.

Once the decision is taken to begin stepping away from QE, those expectations will have to be recalibrated. Eurozone markets have already begun speculating over the timing of interest rate increases, and may have to become slightly more defensive. If economic conditions were to slip, it is difficult to restore the old psychology. For example, in the year 2000, the Bank of Japan made a policy error by raising interest rates too soon,
costing the country an edge it has struggled to regain.

ECB President Mario Draghi’s tenure ends in October 2019. His legacy is already secure, as his “Whatever It Takes” message helped lift the eurozone in 2012. Nonetheless, he is taken a certain gamble in easing the accelerator amid the range of downside risks facing the region. Let’s hope he is playing his cards right.