A Tale of Two Koreas

Making Korean bindaetteok (빈대떡) is a messy endeavor. Beans are ground in a mill until they form a paste, scattering debris everywhere. The batter is then mixed with vegetables and formed into pancakes, which are fried in oil that spatters everywhere. The process is hardly neat, but the outcome is amazing; dipped into a little vinegar and garlic, the disks are delectable.

Relations between North and South Korea have been messy for the past 75 years. The countries were separated at the end of World War II and fought one another in the 1950s. As recently as six months ago, the North was executing tests of missiles and nuclear warheads. Next week, by contrast, the leaders of the two countries will participate in a summit meeting with the United States. Hopes are high for better relations, which could release a significant amount of economic activity.

The Koreas were rather evenly matched until early 1970s, at least in terms of gross domestic product (GDP) per capita. After that period, the two economies drifted so far apart it is hard to believe they were once at parity.

Despite the destruction of most of its industrial facilities during the Korean War, South Korea has achieved a lot in the last half a century, becoming the 11th largest economy in the world. South Korea is a member of the “trillion dollar club” of world economies with a GDP of $1.5 trillion; North Korean GDP is estimated to only be around $18 billion. 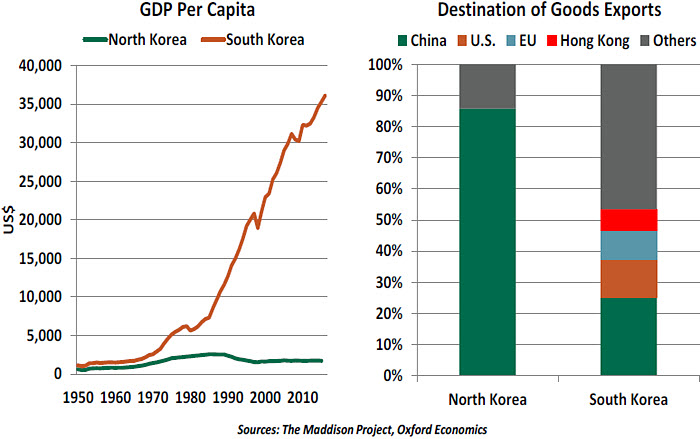 South Korea is also regarded as a regional safe haven. It carries a low and declining level of external debt alongside a sizeable current account surplus. The South Korean won was the best performing major currency in Asia last year.

While some in Washington, D.C., will want to take primary credit for the recent change of tone, China’s fingerprints are all over the emerging détente. Beijing was likely getting weary of defending North Korea’s aggression and acting as the country’s sole patron. China will need to conserve its financial resources as it works to reform its financial system.

The Chinese use of influence with Pyongyang was an attempt to curry favor with the U.S. administration. Bringing diplomatic issues to the table offers important perspective and may ameliorate some of Washington’s more severe instincts on bilateral commerce.

The headlong press to develop nuclear weapons has left little room for economic development in North Korea. According to reports, mere subsistence is a challenge for millions of North Koreans, and the country lacks the basic infrastructure needed to facilitate economic development. Sanctions have taken their toll and relieving them will be essential to lifting the country out of its malaise. 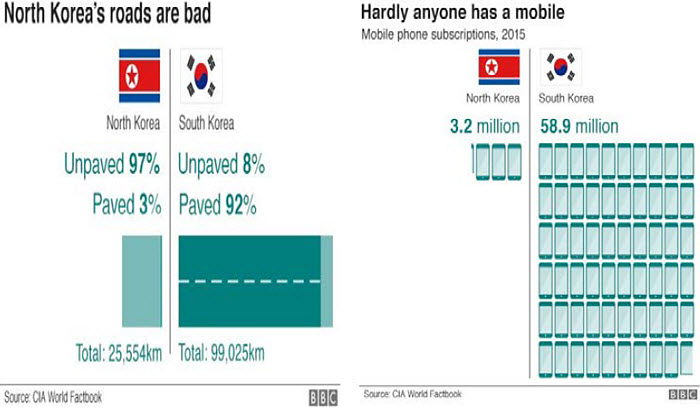 South Koreans are cautiously optimistic. To understand their perspective, first remember that families were separated when partition was initiated and cross-border visits have been carefully controlled. Citizens of the North and South are cousins, both literally and figuratively. The separation feels unnatural to many on both sides of the Korean Demilitarized Zone.

South Korea would be in an excellent position to help the North develop infrastructure if the atmosphere between them continues to improve. Its major companies would stand to earn substantial contracts, and the South Korean government has the ability to help finance the effort. (South Korea’s debt is a very modest fraction of its gross domestic product.) Additional capital could come from Japan, China or multinational cooperatives such as the Asian Development Bank or the International Monetary Fund.

The United States and Japan (the States’ chief ally in the region) would both like to see the temperature surrounding North Korea reduced permanently. The White House would certainly like to trumpet a diplomatic success as the November midterm elections approach.

Some have even gone so far as to dream about reunification, but this seems a bridge too far. For one thing, China would not likely want to risk compromising its influence on the peninsula. For another, it would be difficult to define terms for financial consolidation; the option of establishing a single currency is much more complicated than it was for Germany in 1989. Thoughts of a single Korea, while exciting to some, are not realistic.

Getting to agreement on today’s critical issues will not be simple. Defining the meaning and pacing of denuclearization is not easy, as the recently-abrogated accord with Iran illustrated. Designing appropriate pacing for lifting sanctions will also require careful structuring. And let’s not forget the leaders of North Korea and the United States were involved in a volatile Twitter battle for many weeks, so setbacks are certainly possible.

Nonetheless, the atmosphere on the Korean peninsula has improved. An agreement is possible because it is in the interests of all the main parties to the negotiations. The economic activity and potential that peace would release is a tasty prospect for Asia, and for the rest of the world.

The current economic cycle has been a story of steady growth in every dimension. Employment, personal income and corporate profits have all progressed very well, creating the positive environment we find ourselves in today. Corporate debt has grown with the economy and now stands higher than it did in 2007. As we consider risks to continued growth, the outlook for borrowing done by firms merits consideration.

The rise in corporate bond issuance can be attributed to a happy pairing of supply and demand. On the supply side, we have seen a natural increase in leveraging as the expansion has continued. With prospects improving, firms have felt more comfortable taking on debt to finance future production. Additionally, there has been a tendency for companies to substitute market financing for bank financing. Bank loans typically carry tighter covenants, and the post-crisis increase in capital requirements has made loans more expensive. 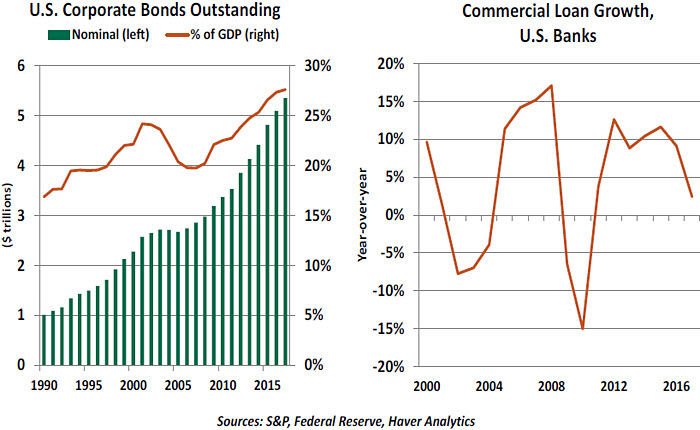 From a corporate finance perspective, debt can be advantageous, as interest payments on debt are tax deductible. Historically, this has made debt financing more attractive for mature companies with stable cash flows to service debt and profits that can be boosted through the debt tax shield.

The 2017 Tax Cuts and Jobs Act (TCJA) did, however, reduce the value of the debt tax shield to businesses. First, the corporate tax rate was lowered from variable rates as high as 35% to a flat rate of 21%. Businesses are simply paying less tax, and the value of the deduction of interest payments has fallen proportionately. Additionally, TCJA newly limited the interest expense that could be deducted for companies with revenues above $25 million. Between rising rates and a reduced debt tax shield, larger businesses may find debt financing to be more costly, making equity financing more favorable.

Offsetting this is very strong demand for corporate bonds. Government debt has carried historically low yields for an unprecedented length of time. Though safe, U.S. government bonds gave a return that barely kept pace with inflation. Outside the United States, government debt in mature markets returned zero or even negative rates, while emerging market sovereign debt is a higher-risk proposition. Investors seeking better returns have been enticed to own more corporate debt.

Corporate issuers have been happy to issue bonds to meet the market’s growing appetite. The cost of debt financing has fallen as demand for bonds has risen. To quickly recap bond mathematics: As prices rise, yields fall. And in our current market, greater demand for bonds has pushed up prices, and therefore pushed down yields. Debt spreads,
whether for highly-rated or more modestly-rated issues, are at their lowest points in 13 years. 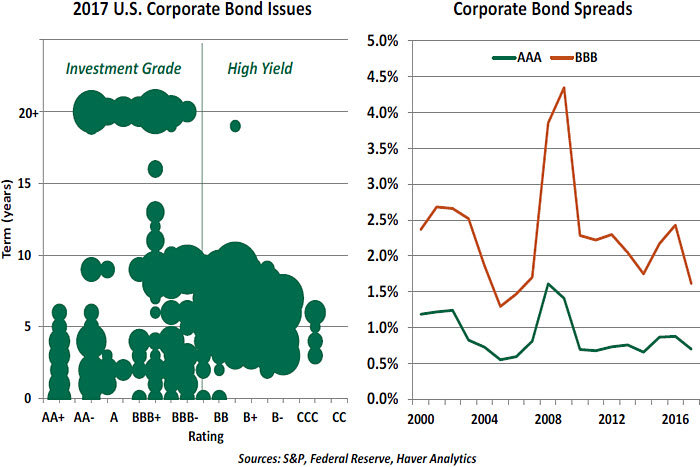 Though current corporate bond debt is continually setting new records, we should maintain some perspective. The increase in quantity of corporate debt is typical of the rise seen in prior economic cycles. With the American expansion likely to set a new record for length, recession remains a very remote possibility. The quality of debt, however, may give pause. Viewing 2017’s bond issuance in aggregate, a large share of offerings was clustered around the border between investment grade and high-yield ratings. High-yield bonds offer attractive returns to investors who have a greater risk appetite. However, high-yield bonds would be the first bonds to face default in a market stress event. And upon review, there are some early signs of risk: