Anticipating the Next Recession

It is said that economists have predicted nine out of the last two recessions, and that they are people who can find a dark cloud behind every silver lining. The profession does have a tendency to overestimate risks and underestimate resilience.

As the global expansion reaches an advanced age, though, the odds of a recession are increasing. The capacity required to support growth is dwindling, and central banks are slowly normalizing monetary conditions. Poorly conceived fiscal, monetary or trade actions usually precipitate downturns, and the list of potential missteps is long.
Recessions are inevitable in market economies. But the depth and duration of downturns can vary considerably based on the events that trigger them, the manner in which they spread and the steps taken to respond. On that last front, there is significant concern that policy makers have little room to provide relief if the present expansion ends anytime soon. And that could make the next recession an especially difficult one.

For the moment, the global economy is performing well. The United States is enjoying its second-longest expansion, Europe continues a nice advance (despite impending Brexit), and China has sustained a record of performance that is unparalleled in the modern era of economic development. While some emerging markets are faltering, many are riding the coat-tails of progress seen in larger countries.

Nonetheless, concerns of a recession are gaining attention. Recent polls suggest a plurality of forecasters think the current American expansion will not last more than two additional years, while the odds of a downturn by 2020 in other areas are rising. 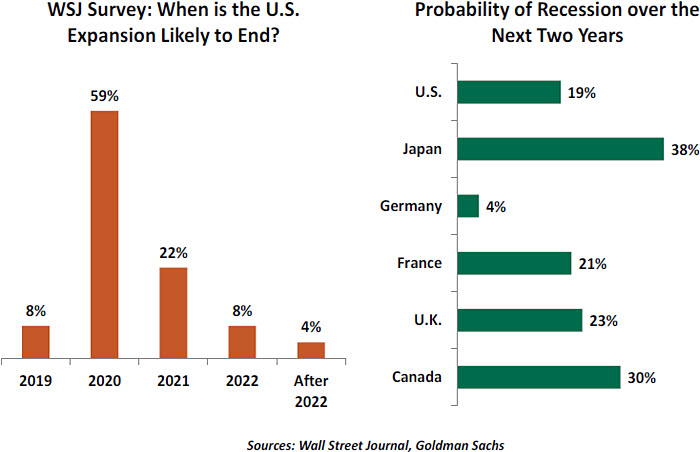 Before anyone gets overly alarmed, some background is in order. Surveys and models that attempt to predict recession have wide margins of error. A number of economic research groups have created equations that attempt to predict recession likelihoods based on growth momentum, financial conditions and other leading indicators. Increasingly, algorithms are evaluating these elements globally, to account for the expansion of international commerce. The output is certainly interesting to look at, but substantial uncertainty surrounds the results.

The yield curve has been getting a lot of attention as a recession indicator lately. In the United States, inversions of the yield curve (where short-term rates are higher than long-term rates) have been seen prior to the last five recessions. As the two ends of the U.S. yield curve approach one another, some have taken this as a sign of slower times ahead. But the predictive power of the yield curve is not absolute (some false positives and long lags), and increasing international ownership of U.S. Treasury securities may cloud its value as a leading indicator.

Further, many recessions are brief and relatively mild. The United States has had seven downturns in the last 50 years: the shortest was six months, and the longest was 18 months. The average increase in unemployment during these phases has been 2.5%. Economic retreats are never pleasant, but many are relatively shallow. And sharp recoveries
often follow, limiting any
lasting economic damage.

As we think about what might lie ahead, there are other reasons for comfort. In most countries, leverage in the household sector is well down from its extremes of a decade ago. Financial institutions have been prodded by markets and their regulators to increase capital, which should limit the likelihood of 2008-style contagion. And use of exotic financial instruments that are not traded on exchanges has fallen substantially from a decade ago. 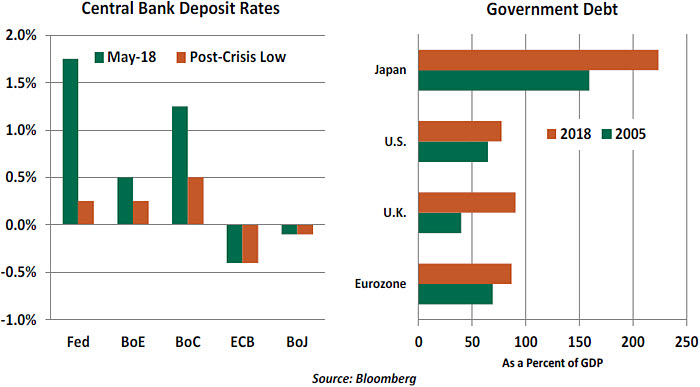 On the other hand, the policy makers’ ability to buffer the next downturn may be very limited. When recession sets in, central banks cut interest rates and legislatures typically increase government spending to compensate for faltering private demand. Both of these avenues were generously applied in the years after the 2008 crisis.

But central bank interest rates are still very low, leaving little room for cuts should conditions call for them. The Federal Reserve has slowly increased the lower end of its target rate band to 1.5%, but that is well below past cycle peaks. (Over the past five U.S. recessions, the Fed has cut rates by an average of about 5%.) The European Central Bank and the Bank of Japan have rates that are below zero, but the effectiveness of negative interest rates is in considerable doubt. Few think that this policy would be pursued too much further, even in the event of a recession.

Alternative forms of monetary policy, like quantitative easing, are not as effective as rate reductions and have side effects that must be carefully managed. Central banks have stepped up to purchase a lot of government securities during the past 10 years, but want to avoid the perception that they are merely monetizing national debt. If the independence of monetary authorities becomes compromised, markets may not react well.

The global fiscal policy position is not much better, with sovereign debt at twice 2008’s level (relative to gross domestic product). Most countries are running budget deficits, despite solid economic performance. Demographics in developed countries will stress public finances further in the decade ahead, as aging populations increase the burden
of pensions. Investors may not be willing to finance continued profligacy at reasonable prices.

Some have urged policy makers to accumulate more “dry powder” to address the next downturn, whenever it might come. But they must be cautious about tightening policy too far, lest they create the kind of negative outcome they are attempting to prepare for. The best outcome, of course, would be for today’s recession forecasts to be proven wrong … as they have so many times in the past.

Last year, the eurozone enjoyed its best economic year since hitting bottom in 2013. However, this year has brought a series of weaker-than-expected data releases. As a result, talks of a fresh downturn have returned.

The German-based Macroeconomic Policy Institute recently raised its probability of a recession beginning this quarter in Germany from 6.8% to 32.4%. The International Monetary Fund sees a little over 20% probability of a European recession over a four-quarter horizon. Goldman Sachs also predicts a low but rising probability for a eurozone recession (proxied by the performance of its core members: Germany, France, Italy and Spain).

A recession in the near term would send shockwaves across the region. European economies that remain weak will suffer drastically, leading to high unemployment rates, a sharp fall in output and a deep deflationary environment. Debt default risks will return, particularly for countries such as Greece that were rescued during the recent crisis.

The European Central Bank (ECB) has done “whatever it takes,” but may not have many resources to deal with the next downturn. With interest rates already at zero or negative, the ECB has hardly any room to cut interest rates further, and the ECB’s quantitative easing program has been struggling to find additional assets to purchase. Europe lacks a common fiscal backstop and its banking sector, while healthier, is still tenuous.

An economic correction would certainly defer dreams of a fiscal or banking union. Instead, it could bring an existential threat to the euro currency and the region. A renewed divergence of fortune combined with the restrictions imposed by a common monetary policy and eurozone fiscal limits would certainly allow Europe’s populists to
gain strength. Italy’s recently formed government shows that populism is alive and well,
even during relatively prosperous times.

In our view, there is no need for immediate alarm. The eurozone appears to have lost some momentum, but isn’t close to a significant downturn. Nonetheless, the next recession (whenever it comes) could be a difficult one for Europe to weather.

As we explored recently, a variety of factors are pushing up oil prices. Consumers feel the impact of oil prices immediately at the gasoline pump. Higher fuel costs are a burden on the economy generally, but are a more acute pain for owners of vehicles with poor mileage and those with lower incomes. With oil trading at well over $70 per barrel, we’ll want to watch the effect on consumption very closely.

Higher gasoline prices affect all consumers, but not everyone is equally able to absorb a price increase. Lower income earners shoulder a greater proportional burden of transportation cost because a greater share of their wages is spent on gasoline. They often live in more affordable but inconveniently located areas, increasing their dependence on cars. As oil prices fell starting in 2014, the lowest quintile of wage earners experienced a windfall: the share of their income spent on gasoline fell from 13% to 8%. If we see energy prices rise akin to the mid-2000s, these consumers will once again find themselves worse off. 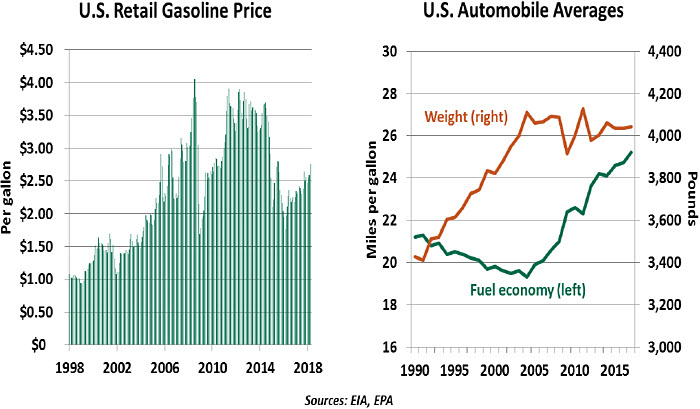 We entered the year with a fresh stimulus in the form of the Tax Cuts and Jobs Act. Most wage earners saw a modest tax reduction as withholding tables were revised. The gain varied by income and household, but was estimated to be around $1,000 for a median taxpayer. However, lower income earners have a high marginal propensity to spend their tax gain, which stood to support continued economic growth. Now, as gasoline prices rise, much of the gain from the tax reduction – forecasters have suggested as much as one-third – will be absorbed by higher costs of transportation.

A shift in motoring preferences is important background as we contemplate the impact of rising fuel prices. The recent run of low gasoline prices steered more vehicle purchasers away from cars and into trucks. In 2017, a record high 63% of retail vehicles sold in the United States were light trucks, a category that includes sport-utility vehicles (SUVs), pickups and minivans. Ford Motor Company recently announced that it would end U.S. production of most its sedans, coupes and hatchbacks, reflecting this evolution in tastes.

Auto industry observers are now worried that U.S. consumers and manufacturers are repeating a mistake made a decade ago. The last time oil surged to new heights, Americans found their fuel-hungry SUVs much less desirable. Historically, the appeal of light trucks was kept in check by their higher total cost of ownership. Aside from a higher purchase price, their additional weight meant greater fuel consumption. And many
manufacturers recommended the premium grade of gasoline.

Today, thanks to more efficient powertrains and lighter-weight materials, the gap in fuel economy between types of vehicles is closing. As seen in the preceding chart, the average weight of vehicles sold in the United States has plateaued at around 4,000 pounds (1,800 kg). But average fuel economy continues to rise. Consumers can now purchase the vehicle style they prefer without facing significant additional operating expense.

As well, the rise of ride-sharing may alter the sensitivity of economic performance to gasoline costs. More people pay for fuel indirectly, through the cost of Uber or Lyft rides. It will be interesting to see how and when the fares for these services are affected.

It would be a shock if a barrel of oil returned to the peak price of $145, recorded a decade ago. However, prices have been rather low over the past few years. With continued strong global demand for oil, and sanctions on Iran poised to reduce the global supply, consumers should brace themselves for higher prices at the pump. Changing conditions will not likely prompt drivers to dump their SUVs, but it will take a bite out of consumption. And that bite will be bigger for some than others.