We have made a decision now that will permit us to create an economic order in the world that will promote more growth, more equality, better preservation of the environment and a greater possibility of world peace.

The North American Free Trade Agreement (NAFTA) went into force nearly 25 years ago. The negotiations preceding the agreement spanned three U.S. presidential administrations and became a divisive issue in the 1992 election. What’s old is new again, as renegotiating NAFTA was a plank of Donald Trump’s platform in 2016.

Politics aside, all trade agreements need careful monitoring and occasional amendments as trade relationships evolve. As the U.S. resumes negotiations with Canada and Mexico, a recap of the goals and outcomes of NAFTA is in order.

NAFTA set out to better integrate Mexico into the North American economy, reduce illegal immigration from Mexico and make North American exports more internationally competitive. NAFTA did lower the costs of manufactured goods, benefitting not just consumers, but also the global competitiveness of U.S. and Canadian firms. As more intermediate goods could be produced at a lower cost, the net reduction in costs lowered the price of North American exports and helped the U.S. fight for market share against a rising Asia. 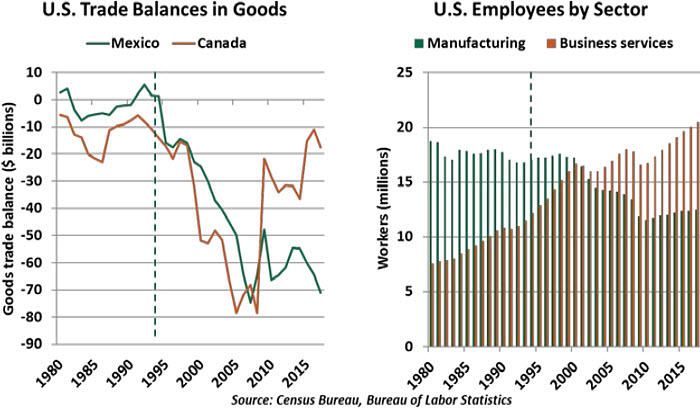 However, the movement of manufacturing to Mexico proved to be transitory for many industries, as China emerged as an even fiercer export competitor. Products more amenable to shipping are now much more likely to be made in China than Mexico. The industries that have remained in Mexico are those whose outputs are intermediate to U.S. factories or are heavier and less practical to ship, like cars and trucks.

Free-trade deals like NAFTA often have diffuse gains and concentrated losses. Most North American residents are better off, through lower prices and more competitive exports. However, per-capita income in Mexico in the early 1990s was only 30% of that in the U.S.; this led scores of lower-skilled jobs to move south of the border. The former employees of factories in the U.S. and Canada who were displaced by NAFTA felt acute pain from the trade agreement.

The impact was not a total loss for the northern partners to NAFTA, as well-paying jobs were created in fields like logistics. Further, the accord has probably taken too much blame for job losses, with only 5% of worker dislocation directly attributable to NAFTA. While some jobs were relocated, the U.S. continues to employ over ten million manufacturing workers.

Changes to gross domestic product (GDP) due to NAFTA have proven difficult to calculate. Most NAFTA policies took effect in the mid- to late-1990s, a time of general prosperity and growth across sectors. China’s entry to the World Trade Organization (WTO) in 2002 changed the landscape for manufacturing employment globally, complicating attempts to isolate NAFTA outcomes. The total gain to the U.S. economy is estimated at up to 1% of GDP. Meanwhile, new foreign direct investment into Mexico led to greater growth and reduced poverty for a once-struggling nation.

More broadly, the agreement helped to normalize relations across the continent. Illegal border crossings fell as economic opportunity in Mexico grew. Mexico entered the agreement as one of the most protected economies in the world, and today, it is one of the most open. The progress that NAFTA represents is substantial, and any changes to the status quo must be carefully considered.

I will renegotiate NAFTA. If I can’t make a great deal, we’re going to tear it up.

On the basis of trade volumes among the member nations, NAFTA can easily be labeled a success. Since the agreement went into force, the value of exchanges between Canada, Mexico and the U.S. has more than quadrupled to around $1.2 trillion annually.

The current U.S. administration takes a more pessimistic view, characterizing the arrangement as one-sided and job-destroying. Against this backdrop, the Trump administration officially triggered NAFTA renegotiation talks in May 2017. Nearly a year has passed, with little headway made.

Recent developments suggest commitment by all parties to a successful renegotiation. Discussions have concluded successfully on adopting regulatory best practices to ensure transparency, anti-corruption measures and competition policy that provide parties “reasonable opportunity to defend their interests and secure certain rights and transparency under each nation’s competition laws.” Current topics of debate include raising labor standards, reducing border delays and establishing rules for digital trade (which govern cross-border information flows and access to the source codes of imported technology products).

Despite the improving tone, some contentious issues remain unresolved:

Auto rules of origin. For cars sold in the U.S., Washington is asking that 75% of the vehicle’s parts be North American, a major increase from the current 62.5%. The U.S. had also suggested that 50% of each car sold be composed of U.S. content, but that requirement has been dropped.

China is a growing factor in overall import composition within NAFTA. The share of U.S. content in imports from Canada has eroded from 21% in 1995 to 15% in 2011. The same trend is seen in imports from Mexico (26% U.S. content in 1995 and 16% in 2011). The share of Chinese content in Mexican and Canadian products has increased steadily over
the same time period. This is of concern to the Trump administration, which is seeking to
rebalance trade relationships with the People’s Republic. 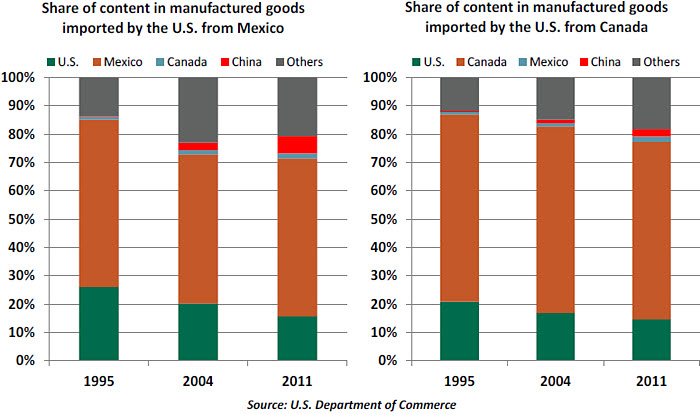 Other points of contention in the NAFTA talks include:

NAFTA in its current form has benefitted Canada and has been transformative for growth in the Mexican economy. The U.S. alone accounted for almost over three-quarters of Mexican and Canadian exports in 2017.

A unilateral U.S. exit from the accord (a scenario we consider unlikely, campaign tweets notwithstanding) would be accompanied by economic costs for all, although the extent of damage will differ by country. Mexico, the biggest beneficiary, stands to suffer the most. According to Oxford Economics estimates, a U.S. exit from NAFTA would reduce real growth by 0.9% in Mexico, 0.5% in Canada and 0.5% in the U.S. in 2019. In the medium term, a NAFTA breakdown would weigh on the Mexican economy by around 4% of GDP over the next five years.

Beyond the overall growth numbers, American auto and manufacturing industries, which have integrated supply chains across the member countries, would also suffer. A withdrawal and possibly a new arrangement outside NAFTA would prove to be more costly, forcing U.S. firms to re-assess their Mexican and Canadian operations. 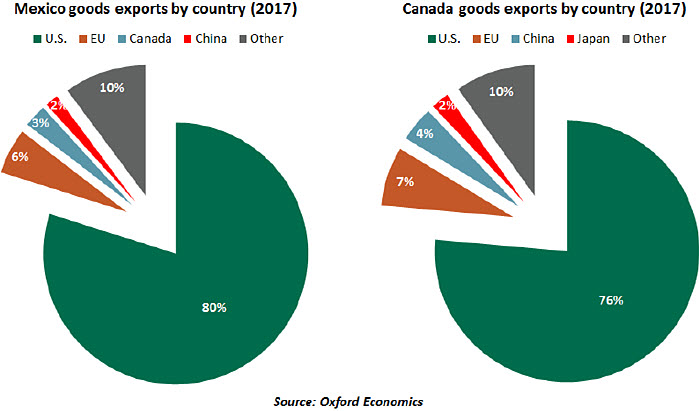 Both Canada and Mexico have entered into trade agreements with the European Union (EU). With comparable wealth and spending behaviors to those of the U.S., the EU could prove to be an attractive alternative if NAFTA is not renewed.

Even if agreement is reached before July on an updated NAFTA, upcoming elections in both the Mexico and the U.S. could hinder adoption and implementation. Under U.S. Trade Promotion Authority, a 90-day waiting period is required before officially signing an accord. After that period, negotiators would have to wait for a period of up to 105 days
for a study by the International Trade Commission before it is put to vote in the Congress.

If the Republican Party fares poorly in the November elections, the new Congress could make further demands, causing delays in the process. The Trump administration may be in a race against time to get a better deal.

Meanwhile, Mexico will have its next presidential election on July 1. If he is elected, front runner Andrés Manuel López Obrador has pledged to stop negotiations until a new government is formed. Any progress in negotiations to that point could be lost, as Mr. López would seek to include more contentious issues such as migration in the discussions.

At least for now, financial markets seem to have taken some consolation from the recent positive tone in the NAFTA negotiations. An “agreement in principle” in early May seems the most probable outcome. As Canadian Prime Minister Justin Trudeau recently stated: “There’s positive advances that have been made, but it’s not over ’til it’s over.”

Americans of a certain age were raised with the Schoolhouse Rock cartoons, which taught children about numbers, grammar and society. One installment entitled “Three is a Magic Number” extolled the virtues of triangles, tripods and triumvirates while reinforcing the products of three.

In the current day, three may be a magic number for investors, but not in a good way. The yield on a ten-year U.S. Treasury note rose above 3% this week, a level it has not reached for four years. The proximate cause was the sustained increase in oil prices, which have a demonstrated link to inflation and inflation expectations. But there are other bearish signs for bonds that may be at play.

In 2014, oil prices began a two-year descent from over $100 per barrel to $30 per barrel. In concert, ten-year U.S. yields fell by half. On the surface, this association runs counter to economic theory: the oil price shift was a “level effect” that should not have an influence on long-term inflation. The Federal Reserve gauges inflation on a “core” basis, using metrics that exclude volatile components like food and energy.

Nonetheless, energy costs apparently remain impactful for fixed income investors. Crude has jumped by almost $10 per barrel in the last two months, and is more expensive than at any time since 2014. And the 10-year yield has reacted in concert. It doesn’t help that the reversal coincides with a substantial increase in the supply of Treasuries being offered, and anxiety over whether U.S. government finances are out of control. It also does not help that the Fed is reducing its holdings of government debt.

Three is just a number, but it may indeed be magical. Behavioral economists have proved the visceral difference between 2.99% and 3% is more than a basis point. There is no telling where bond yields might go after clearing that threshold.