It had been a long journey, which included multiple encounters with customs and airport security. It was nearly dinnertime in Limerick, with business starting promptly at 7:15 the next morning. I still had a stack of preparatory material to read, but I couldn’t get motivated.

I needed something to enhance my focus; a brown beverage, perhaps. But not coffee, mind you. Instead, I visited a relaxed public house and enjoyed a perfectly poured Guinness. Somehow the pages flew by, with many notes taken. The arcane details of Brexit suddenly seemed simple. I hadn’t felt that productive in some time.

For visitors, the charms of Ireland go well beyond the brown nectar. For economists, the country is interesting for other reasons. Ireland lies on the frontier (literally) of the debate over global trade. The resolution of its boundary issues may prove a harbinger of what lies ahead for other regions.

The Republic of Ireland shares the island of Hibernia with Northern Ireland. The former is an independent nation, and a member of the European Union (EU). The latter is a member of the United Kingdom (U.K.). Once at terrible odds with one another, the two have enjoyed 20 years of relative peace. The border between them, once a flash point for violence, has dissolved; thousands of people and millions in commerce cross it daily. 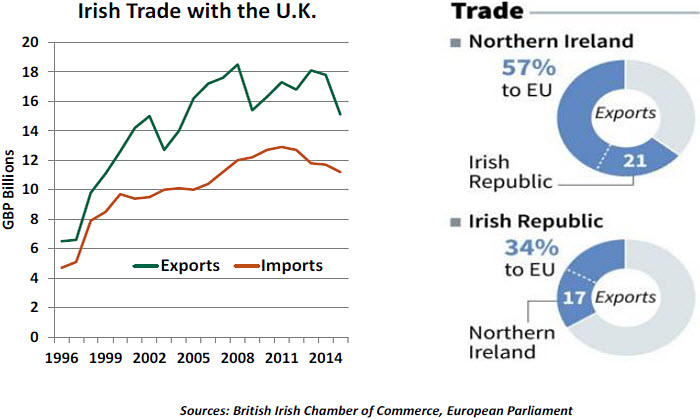 When voters in the U.K. chose to divorce themselves from the European Union, they created a significant problem for the Irish. Brexit could return a guarded border to the island, an outcome that would complicate commerce and politics. As negotiators tackled the thorniest issues involved with separation, the Irish problem quickly rose to the top of the list.

There are three potential paths to resolution. The first would be to have Northern Ireland and the Republic of Ireland transact under rules established by the World Trade Organization (WTO). This would be a step back from the current arrangement, and potentially lead to periodic disputes over trade. The WTO’s ability to enforce its rules has been hindered by a swelling caseload and shrinking support brought about by the nationalist impulses spreading across the globe.

The second would be to create a free trade zone on the island. The North would follow the EU’s rules to preserve its interactions with the Republic. But such an arrangement would create different trade practices within the United Kingdom, making it hard for Northern Ireland to transact with the rest of its country-mates. This idea solves one big problem, but creates another. 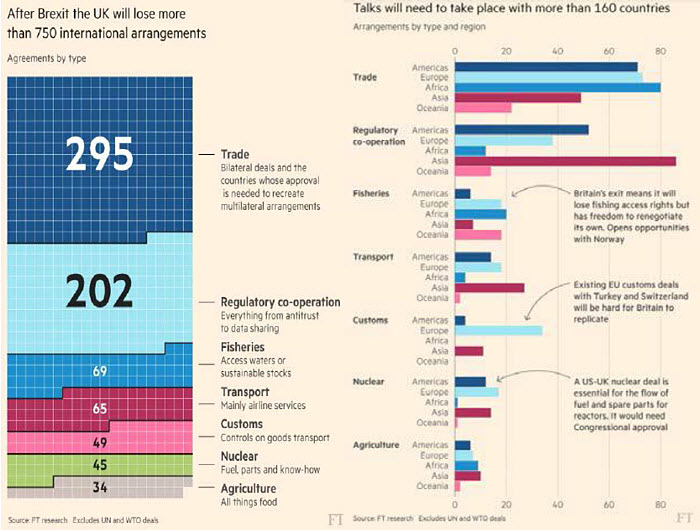 But the optics of that arrangement, however sensible it seems on the surface, would abrogate the wishes of the majority that voted to leave the EU. (It would actually be worse that the current state of affairs, because the United Kingdom would have no voice in the establishment of EU trading rules after departure.) Prime Minister Theresa May will have to choose her words and her alliances very carefully to bring this outcome about.

We can draw two main lessons from this challenging situation. The first is that countries should not assume they can strike better terms by moving away from existing trade agreements. The combatants in the current round of global trade friction would do well to remember this.

And secondly, public referenda are a terrible way to decide complicated problems. It would have been far better if the parties to Brexit had tried to hash things out behind closed doors; perhaps with a few pints of Guinness to move them along.

For most of the past decade, very tight credit conditions have hindered the eurozone economy. Banks in the region were deeply wounded during the financial crisis, and lacked the capital and the commitment to lend. Investors became hesitant to own European corporate bonds.

More recently, though, corporate leverage has increased, leading to some renewed concern. While credit plays a central role in fostering economic growth, too much of it can create systemic risks. A look at the data suggests that there is little reason for worry.

The European Central Bank’s (ECB’s) asset purchase program (also called quantitative easing) has led to a noticeable decline in interest rates and a tightening of credit spreads. Unlike the Federal Reserve, the ECB has been buying corporate bonds under the Corporate Securities Purchase Program since the spring of 2016. All of this has lowered corporate borrowing costs.

Favorable financing conditions have motivated more debt market entry by non-financial corporations (NFCs) in the eurozone. According to Dealogic data, euro-denominated NFC bond issuance amounted to around €391 billion in 2017 and €345 billion in 2016. In 2008, issuances were only around €100 billion. Many of these new offerings are being used to refinance existing debt, allowing corporate borrowers to secure long-term funding at lower rates.

Bank lending growth to eurozone companies has also increased notably over the last three years, rising 3.1% for the 12 months ending in February 2018. This is demand driven, but the improving health of continental banks also helps.

Increased corporate leverage does not yet appear to have reached challenging levels. Corporate indebtedness relative to gross domestic product (GDP), though elevated, has been on a downward trend since early 2015. GDP growth outpaced debt growth during that interval, generating cash flow for companies that reduces the need to borrow. While eurozone lending growth is strong, it remains below pre-crisis levels, as some banks continue to repair their balance sheets.

Debt servicing costs are also low. The ratio of interest payments to corporate cash flow is a useful way to assess debt sustainability. This measure has declined significantly from a peak of 20.5% at the onset of the crisis in 2008 to just 6.5% in the last quarter of 2017, thanks to the low interest rate environment. Because the ECB is unlikely to raise short-term interest rates for a long time, borrowing costs should remain manageable. 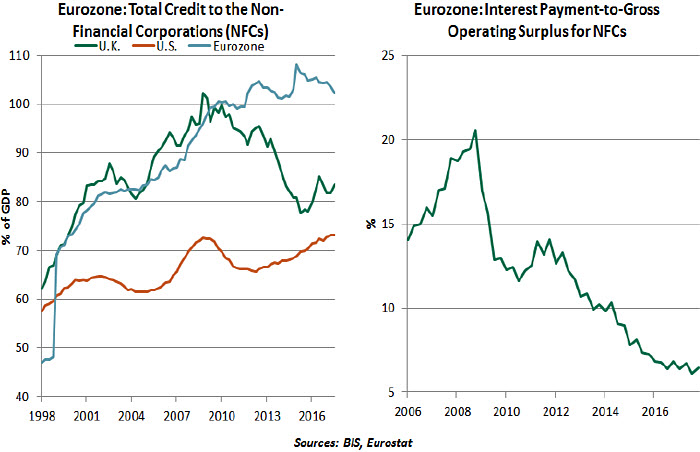 Nevertheless, the elevated level of NFC debt relative to historical and geographical (U.S. and U.K.) standards suggests that it deserves ongoing monitoring. The ECB has been very supportive of debt markets, but will likely seek to taper that support in the years ahead.

It seems somewhat ironic that anxiety over insufficient borrowing has been replaced so soon by anxiety about excess borrowing. As in other areas, the eurozone will need to achieve a happy medium on this front.

The Phillips Curve has been debated at length in this growth cycle. Traditionally, there has been an inverse relationship between unemployment and inflation. This is logically driven by employers raising wages to attract and retain workers, and then passing those costs along to consumers.

In recent years, as the unemployment rate has fallen below its long-run average, we have yet to see American inflation increase as the Phillips Curve would predict. However, the United States is a big country. Regional variations suggest the Phillips Curve is still working, and not in the places we might expect.

States are not directly comparable. The results do not fall into perfect rank-order; for instance, New Hampshire had the second-lowest unemployment rate but below-average wage growth. Each state’s individual population size, industries and business climate play a factor in its growth prospects. In aggregate, however, there is a trend of lower unemployment foretelling higher wage growth.

An interesting question is why above-average wage growth in some states persists, given the longstanding pattern of people moving to where jobs could be found.

In the current cycle, however, labor mobility has been hindered. Many workers have found themselves saddled with houses worth less than the debt owed on them. (The situation is easing, but “house-lock” remains a problem in some areas.)

Further, some of the states with the highest median wage growth are not seen as destinations that are easy or desirable to reach. The table above highlights four states that fall into this category. Hawaii thrives in tourism but is a less common target for permanent relocation; for most continental residents, it’s a distant move toward a different lifestyle. Central states like Nebraska, Montana and Iowa are primarily agricultural markets, hosting mid-sized cities that support their commerce. They do not capture the buzz of high-growth, high-wage coastal cities, but they are productive and have jobs in need of filling.

In the near future, we may see populations of these less dense areas grow. Relocation activity is starting to increase, but it is not just workers flocking toward high-growth cities seeking work. Migration is moving in both directions. As higher-paying sectors increase their hiring, workers in lower-paid positions are finding themselves priced out of the
markets they used to call home.

The increasing availability of remote work also makes it possible to continue working for companies headquartered in expensive cities without continuing to live nearby. This trend is borne out not just in survey data, but anecdotal evidence such as the high prices to hire a moving truck to get out of the San Francisco Bay area. Workers seeking a lower cost of living and a more balanced lifestyle may consider states like those highlighted above.

There is room for these states’ populations to grow. The four leading states shown above had population growth below or in line with the national average. At the same time, high-growth states like Colorado, Nevada, Texas and Florida all had population growth rates above 10% over the same interval, but their wage growth was unremarkable. As more people move to those states, the supply of labor expands, and the overall wage growth rate remains subdued. The states with the greatest wage growth had steady populations. This low growth helped to fuel competition for workers, and wage inflation followed.

The Phillips Curve is a useful relationship for understanding labor dynamics. Questions about its continued effectiveness stem from slow wage growth in nationwide data. Looking more closely at the state level helps us to see that the relationship remains in effect. Median wage growth exceeds the national average in states with low unemployment and slow population growth. As the recovery continues to spread, driving down unemployment in pockets where it remains elevated, we expect to see wage growth become a more consistent trend nationwide.