One Year Until Brexit

In a speech to Parliament last spring, British Prime Minister Theresa May said, “I prefer not to use the term of divorce from the European Union because very often when people get divorced they don’t have a very good relationship afterwards.” Whatever we want to call Brexit, there is only one year left before the relationship between the United Kingdom and the EU enters a new phase. Much work remains in defining new terms for their interactions and the level of pleasantry they feel for one another.

The effect of impending Brexit has already had a dampening impact on the U.K. economy, which is growing more slowly than most others. Uncertainty surrounding the situation weakened the pound, decreasing real incomes and hindering consumption. Business investment has slowed, but not to the extent that many had anticipated initially. Net migration is down 27% since the June 2016 referendum, with industries such as farming, food and hospitality reporting labor shortages. Jobs in the financial sector are likely to move out of the U.K., and London property prices have fallen as much as 15%. 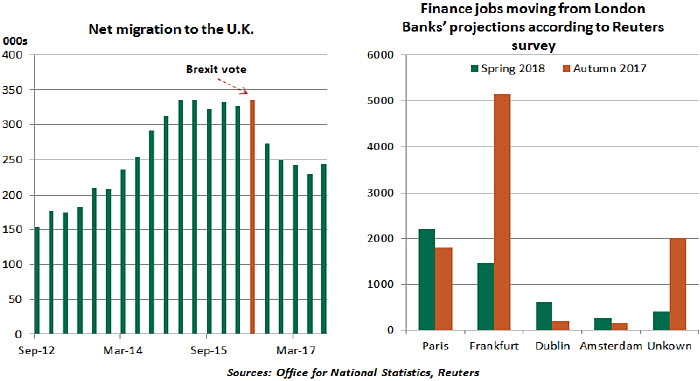 The internal political environment in the U.K. is not helping things, with Tory leadership divided on many key Brexit issues and the party collectively losing ground in the polls. Local elections on May 3 could result in losses for the conservatives, which would add to the pressure on Theresa May and lead to fresh talk of a leadership challenge.

The timeline for Brexit developments will proceed as follows. Some progress in the negotiations is expected by the time of the EU summit on June 28-29 and talks on future trade arrangements (along with plans for implementation) must be wrapped up by this autumn. Considering the short window (effectively 6-7 months), the talks will have to move quickly.

Business “passporting,” customs arrangements and a framework for resolving trade disputes are major items to be resolved. All sides want to avoid a hard boundary between the Republic of Ireland and Northern Ireland, which might bring back memories of “The Troubles” and the bad feelings that came with that era.

One year from now (March 29, 2019) is the deadline for ratification of a withdrawal treaty. March 30 will mark the start of a transition period that will end on December 31, 2020. During the transition, the U.K. will continue to be covered by trade arrangements established on their behalf by the EU. However, Britain will have to negotiate and sign trade deals with other countries and regions that will begin in 2021. The U.K. Department for International Trade’s desire to adapt existing EU free trade agreements for British purposes seems an optimistic position.

The government has been pitching the concept of “Global Britain,” a term increasingly used in the contexts of foreign policy and trade. However, according to the Financial Times, the government will have to replace at least 759 treaties, 295 of which are related to trade. Given shifting attitudes towards global commerce, this may be a difficult task.

A “soft” Brexit (similar to the relationship between Norway and the EU) is the scenario that preserves substantial commerce, with the current framework of cooperation maintained in the areas of national security, defense and foreign relations. If Britain cannot reach an acceptable arrangement with the EU, the U.K. is likely to operate under rules set out by the World Trade Organization (WTO), which are more restrictive and costly. Further, countries are increasingly moving ahead with protectionist measures without consulting the WTO, undermining the organization’s ability to referee international trade. So operating under its auspices may not provide much structure for Britain.

Although there is a range of estimated economic effects of Brexit on the U.K. economy, the broad view (including that of the government) seems to be that it will be a net negative. The main disadvantage is that increased trade and regulatory barriers could harm the auto and finance industries (among others), reduce consumer purchasing power and threaten employment. 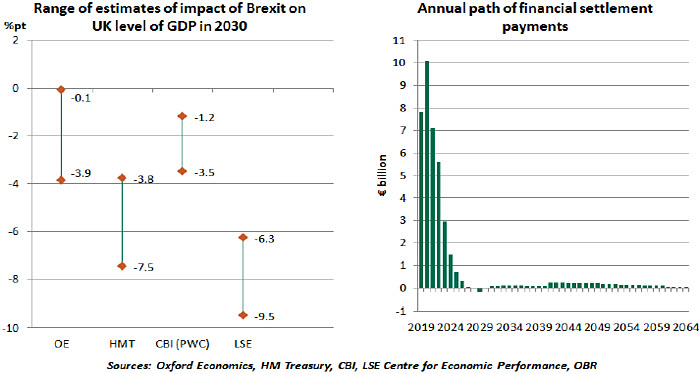 The government impact analysis of Brexit shows that a standard free-trade agreement with the EU would cost public finances £60bn per year. According to the Office for Budget Responsibility, the Brexit “divorce bill” would cost £37.1bn in total, as the U.K. remains liable for some pension liabilities accumulated during its tenure as an EU member (see above).

Gains, though limited, include savings of around £3bn a year beginning in 2021 by stopping EU budget contributions and (this may sound hopeful to some) better terms of trade negotiated on a bilateral basis, as opposed to the current terms provided by the EU.

Brexit is a two-way street. Economic implications for the EU for the remaining members would also be a net negative, although to a lesser extent. Though it is in the EU’s best interest to maintain good relations with the U.K., the EU cannot be too accommodating; other countries might also press for “á la carte” terms of membership if favorable conditions are granted to Britain. The EU is already combatting challenges to its social tenets in Poland and Hungary, and may want to hold the line on further deviation from its core principles.

Both sides will therefore find themselves in a race against time, trying to resolve complicated issues that have the potential for substantial and lasting consequences. The post-war period has been characterized by the advance of global economic cooperation, and there is little precedent for reversing course. Nonetheless, we remain optimistic that the two sides will craft a productive compromise, given all that is at stake.

In light of all the complications, some are hoping a second vote could be conducted and render all of this a bad dream. But the referendum and a reversal are both seen as long shots. As messy as it will be, there seems to be no turning back Brexit.

If we are to believe the latest projections from the Federal Reserve, at some point in the future, the U.S. labor market will need to adjust from a projected 3.6% unemployment rate in 2020 to a long-run rate of 4.5% without entering recession. Rather than accepting a painful correction as inevitable, we should to re-consider how low joblessness can safely go.

The ultimate objective for labor markets is sometimes described as the non-accelerating inflation rate of unemployment, or NAIRU. (This notion used to be called the “natural” rate of unemployment, a term that was easier to pronounce.) Inflation is explicitly mentioned because, if the unemployment rate falls too far, employers will theoretically need to raise wages to attract and retain workers. This wage spiral, in theory, could lead to inflation. Policymakers therefore seek an unemployment rate near the NAIRU but not significantly below it.

An economy will always have some degree of unemployment, as the phenomenon takes several forms:

Cyclical: At slow points in the business cycle, there is not enough aggregate demand to provide jobs for everyone who wants to work. This up-and-down labor market rhythm is expected, though the timing and severity of upturns are not always predictable. Today we find ourselves in a positive cycle, with low unemployment and ample job openings.

Frictional: The process of offering and filling a job is not immediate. Employers need to put effort into advertising vacancies, and candidates must apply and interview for openings. In an average month, 5.2 million people in the U.S. leave their jobs, and 5.4 million people are hired. People in this kind of transition will account for some unemployment, although the number has been reduced over time by increasing efficiency in the search process.

Structural: The demands of employers may be misaligned with the supply of available workers. This is often described as a skills gap. Structural unemployment is difficult to remedy, as it requires retraining and often relocating workers.

Estimating the NAIRU is challenging. The only sure way to gauge it is in retrospect, when we observe situations where low levels of unemployment led to accelerating inflation. But history is not altogether helpful on this front. 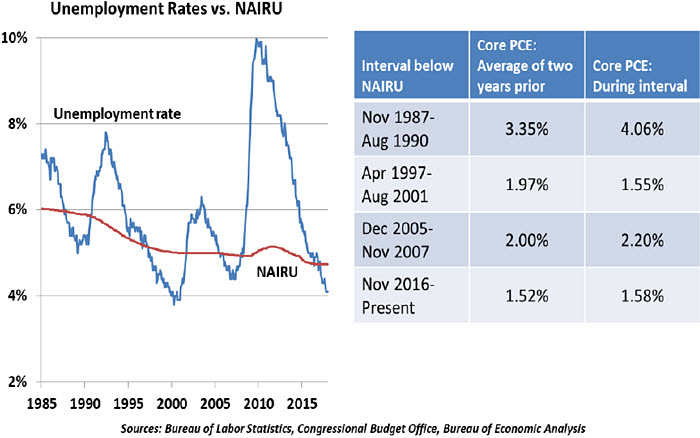 A few interesting trends are revealed by looking at past cycles where unemployment has fallen below the estimated NAIRU. During the most recent three of these periods, we did not experience significant increases in inflation. This calls our understanding of NAIRU into question.

In the most recent guidance from the Board of Governors of the Federal Reserve, the long-run unemployment rate was estimated at 4.5%, which many assume is representative of the NAIRU. The current unemployment rate of 4.1% is below that target, and has been for some time. Yet inflation readings remain benign.

The Fed’s own forecasts appear to reveal some skepticism as to the link between unemployment and inflation. The median forecast for 2020 calls for an unemployment rate of 3.6% and core PCE inflation of just 2.1%. If inflation remains that stable amid a 50-year record low unemployment rate, it may be time to put the NAIRU to rest. It never quite rolled off the tongue.

The Price of Aging

As noted above, inflation has been running well below its targeted levels for a long time. There is an abundance of theories for why this has been so: automation, globalization, and Amazon-ation have all been advanced as explanations. We’ve been over these topics so many times that the debate over “stuckflation” is getting old.

It turns out that getting old may have an influence on inflation, as well. Populations in developed economies are aging, and economists think that demographic shifts may have something to do with the progress of the price level. Unfortunately, opinion is split on whether the increasing concentration of retirees pushes inflation higher or lower.

A study of 22 countries assembled by the International Monetary Fund (IMF) takes the former view. The IMF logic is that larger working-age populations increase labor supply and potential growth, which can serve to limit increases in wages and overall prices. When workers retire, those influences reverse, creating the potential for higher inflation.

Further, workers save during their working lifetimes, and then live off those savings when they retire. Those over 65 therefore contribute to aggregate demand but not supply, meaning countries with higher concentrations of older citizens would experience higher inflation. The left-hand chart below from the IMF study seems to support this hypothesis.

On the other hand, work done by the Federal Reserve Bank of St. Louis (and extended by the London School of Economics) goes in the opposite direction. It proposes that inflation is the enemy of elderly populations, because it causes depreciation in the asset values they are relying on for retirement subsistence. Older population segments are more politically active, the authors suggest, and press for candidates that pursue low-inflation policies. The right-hand chart above seems to confirm this view.

Unfortunately, it is very difficult to prove which school of thought is right. Inflation isn’t just the product of demographics, and holding everything else constant to perform a rigorous study is a fool’s errand. Like other contemplations in the disinflation debate, this one promises to grind on for some time without reaching a conclusion.